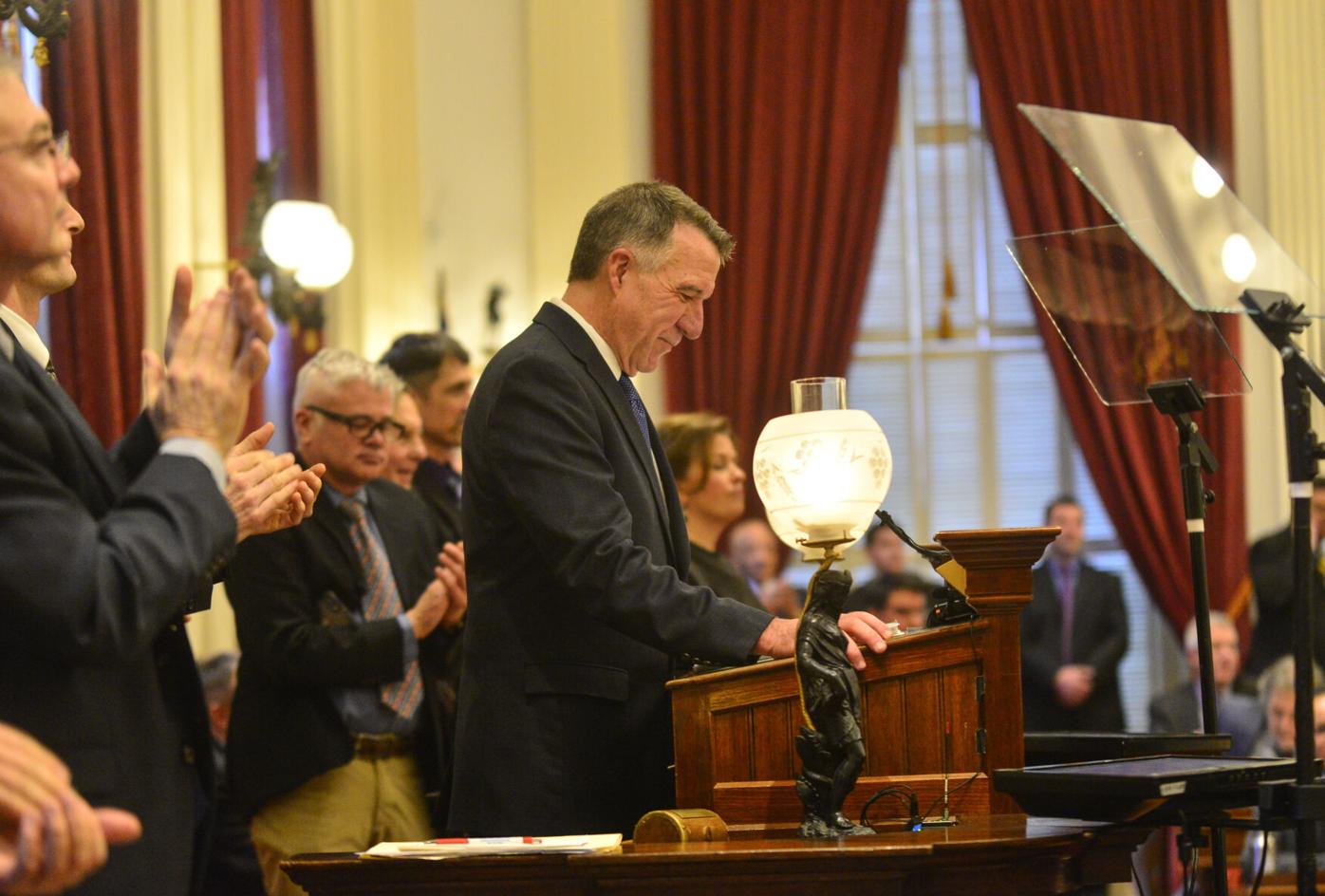 Vermont Gov. Phil Scott delivers his State of the State address to a joint session of the general assembly in the house chambers at the Vermont State House, in Montpelier, Vt., on Thursday, Jan. 9, 2020. Scott has called for President Doland Trump’s removal. 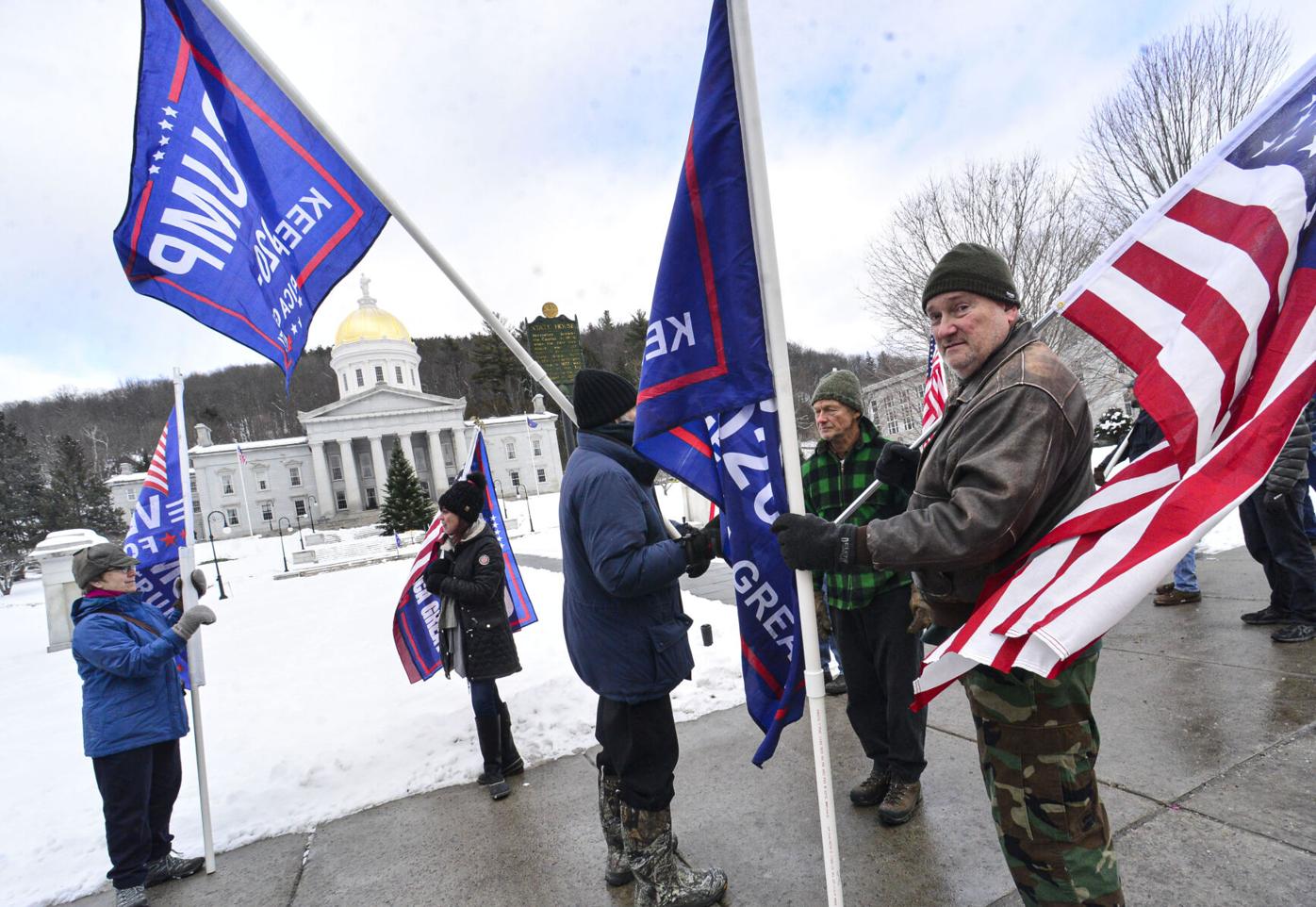 Trump supporters protest outside the Vermont State House, in Montpelier, on Wednesday.

Vermont Gov. Phil Scott delivers his State of the State address to a joint session of the general assembly in the house chambers at the Vermont State House, in Montpelier, Vt., on Thursday, Jan. 9, 2020. Scott has called for President Doland Trump’s removal.

Trump supporters protest outside the Vermont State House, in Montpelier, on Wednesday.

MONTPELIER — Gov. Phil Scott on Wednesday called for fellow Republican President Donald Trump to “resign or be removed from office by his Cabinet, or by the Congress,” placing the blame for rioters storming the U.S. Capitol squarely on the president’s shoulders.

“Make no mistake, the President of the United States is responsible for this event,” Scott said. He called the attack in the Capitol, as lawmakers were debating certification of the Electoral College results showing president-elect Joe Biden had won, “an unacceptable attack on our democracy.”

The storming of the Capitol followed speeches by Trump and by his personal lawyer, Rudolph Giuliani, whipping up the crowd.

“Let’s have trial by combat!” Giuliani told the crowd before it marched toward the Capitol.

Scott called the day’s events in Washington “a very disturbing time for our nation.”

“The rioters have actively assaulted police officers, and they should immediately evacuate the Capitol building or be removed,” Scott said.

Scott has made no secret of his disapproval of Trump, a fellow Republican, as early as the 2016 presidential campaign. Scott called for Trump’s removal following Trump’s impeachment trial last year.

“President Trump has orchestrated a campaign to cause an insurrection that overturns the results of a free, fair and legal election,” Scott said in a statement issued late Wednesday afternoon.

“The fact is the results of this election have been validated by Republican governors, conservative judges and non-partisan election officials across the country. There is no doubt that the President’s delusion, fabrication, self-interest, and ego have led us – step by step – to this very low, and very dangerous, moment in American history.

“The fabric of our democracy and the principles of our republic are under attack by the President. Enough is enough,” Scott said.

Lieutenant governor-elect Molly Gray said Trump "incited an egregious attack on our democracy, and on the very public servants who work so diligently to protect and uphold our liberty." She said she supports "any measures deemed necessary" to remove Trump from office, and that her thoughts are with the Vermont Congressional delegation and their staff.

"This is a dark night in our nation, and we will only meet the dawn of a brighter future by standing together as Vermonters and Americans," Gray said.

New Senate President Pro Tem Becca Balint, D-Windham, said like many Vermonters, "I watched the events in our nation’s capital with horror and deep sadness at the state of our democracy. The President’s actions in attacking our democratic institutions, seeking to overturn the results of the election, and provoking insurrection are egregious, and I join Governor Scott in calling for his resignation or removal."

"In sharp contrast, the start of the 2021 legislative session in Vermont today was marked by adherence to safety protocols, democratic traditions, and collegial, respectful, tri-partisanship," Balint said. "I know we can lead the nation in healing from this dark day."

The House leaders, who opened the 2021-22 biennium on Wednesday, pointed out that lawmakers of all parties had come together with Gov. Scott during the pandemic “to ensure aid and assistance was provided wherever it was needed. Protecting Vermonters was the priority and we put our political differences aside.”

"The First Amendment is foundational to our lives as Americans, and everyone should have the right to express their views, but the forceful takeover of Capitol Hill flies in the face of our democratic values and is completely unacceptable,” the legislators said. “We hope that there is a peaceful resolution to this conflict, and in Vermont, we will continue to work together to the tackle issues that our important to all Vermonters.”

McCoy, of Poultney, issued her own statement condemning the action. “Let me be clear: this type of behavior has absolutely no place in this country, and goes against our most basic values and institutions,” she said.

“Elected officials who encouraged today’s abhorrent events should be ashamed. I am embarrassed for not only our national party, but also our nation.

“Our so-called leaders in Washington have a responsibility to reign in the recklessness that has been promoted, incited, and encouraged from among the most important offices in the nation. This cannot be allowed to happen again,” McCoy said.

Vermont state GOP chair Deb Billado said the mob action at the Capitol are "wrong, immoral and against the fundamental principles that we hold dear not only as Republicans, but as Americans."

"Their actions do not speak for the Vermont Republican Party and we strongly condemn any such lawlessness, regardless of their political affiliations," Biladao said.

"Overturning the election results which were certified by the individual states is perhaps the most disturbing example of federal over-reach imagined," she said.