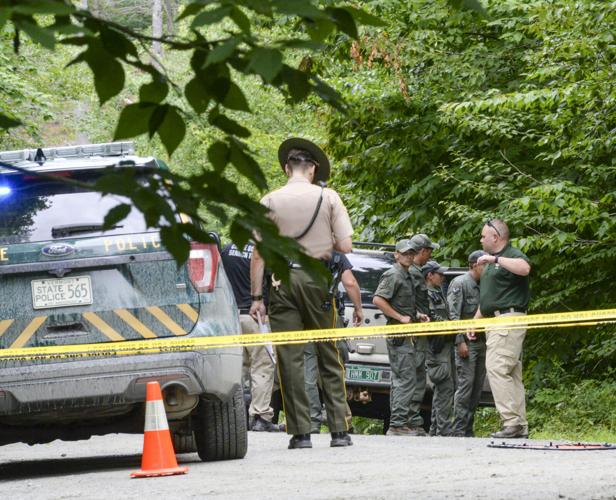 A section of Newfane Road in Wardsboro was closed on Aug. 10 as Vermont State Police investigates a suspicious death. The body of a person was discovered near a logging road the evening of Aug. 9. 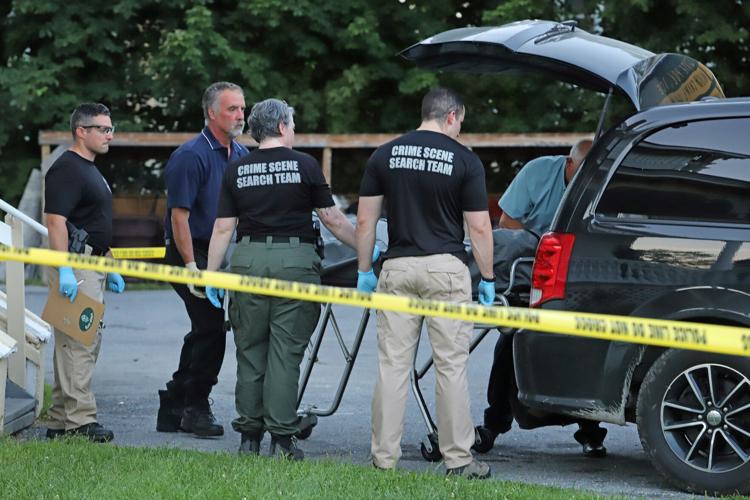 Crime scene investigators remove the body of Patrick Mullinnex, 38, of Springfield, who was killed in the shooting that took place recently at 324 Pleasant St. in Bennington.

A section of Newfane Road in Wardsboro was closed on Aug. 10 as Vermont State Police investigates a suspicious death. The body of a person was discovered near a logging road the evening of Aug. 9.

Crime scene investigators remove the body of Patrick Mullinnex, 38, of Springfield, who was killed in the shooting that took place recently at 324 Pleasant St. in Bennington.

“Vermont is among the safest, healthiest states in the country, and that remains true today,” stated Scott in a news release. “But the fact is, a statewide workforce crisis, coupled with various social and public policy factors, have resulted in a spike in criminal activity and these trends are negatively impacting the public safety and welfare of the state. To address this, we need all our law enforcement organizations to work more closely together, get all our intelligence and data on the table, and face this head-on.”

The 10-point plan includes initiatives to make sure the Vermont State Police can continue to support the needs of communities and local police departments while taking steps to enhance the response in “regional hot spots.”

“This includes efforts to augment staffing with law enforcement personnel from other agencies, and with temporary hiring of retired officers,” states the news release.

The Attorney General’s Office has also agreed to expand the state’s capacity for prosecuting major crimes, including all levels of violence associated with drug and human trafficking; and the judiciary has prioritized eliminating its case backlog to ensure these prosecutions can move forward in a timely manner, states the news release.

Scott has also directed the commissioner of Public Safety to expand the role of the Vermont Intelligence Center and establish “a more nimble interagency collaboration” modeled after Vermont’s nation-leading COVID-19 response.

The 10-point plan also calls for the re-establishment of a violence prevention task force to focus on preventing violence in communities and schools.

“A statewide workforce crisis, coupled with various social and public policy factors, have resulted in a spike in criminal activity, particularly drug-related violent crime,” states the plan. “These trends are negatively impacting the public safety and welfare of the state.”

The governor’s plan calls for a convening of “all local, state, and federal law enforcement agencies ... to develop a shared understanding of the statewide safety environment” and to allocate additional assets to the statewide effort to address violence and crime.

Bennington County State’s Attorney Erica Marthage called the governor’s proposal a “good place to start,” and said some of the 10 prongs are already being done in Bennington County. “We already work very closely with federal agencies like the ATF, Homeland Security, FBI and all of the intelligence agencies on the federal level. That’s not the case in every county in Vermont. That cooperation should be a given everywhere, and it’s not.

“It’s not the governor’s issue. I know he thinks it’s a good plan. We can all be at the table, the state’s attorneys, the attorney generals, the public safety commissioner and all the law enforcement agencies. We are all on the same team. It’s just that we are fighting an uphill battle with the Legislature.”

Bennington Police Chief Paul Doucette is looking forward to reviewing the governor’s plan in-depth in the coming weeks, but agrees with Marthage that Bennington County, including his police department, is already working hand-in-hand with multiple levels of government, including state and federal law enforcement agencies, and that his and other departments in law enforcement struggle with staffing.

“As you know, we are working through many issues surrounding violence and drugs in the Bennington area,” Doucette said. “We are also struggling to maintain staffing levels like many other agencies in Vermont and surrounding states. Vermonters need to look at what is happening in our own state versus other parts of the nation. People interested in the law enforcement profession continues to rapidly decline.”

Doucette then added, “Everyone needs to work together if we are going to rid Vermont of the violence we have been experiencing.”

Brattleboro Police Chief Norma Hardy had no comment at this time on the governor’s plan.

Windham County State’s Attorney Tracy Shriver said she agrees with many of SA Marthage’s points. “And I would add that if this plan gives resources to my office and to Windham County law enforcement partners, then it is a plan I am in favor of and will look forward to helping implement. I would also add that I am likewise concerned about the disconnect between a public safety action plan and legislative actions that curtail, compromise, and cut the tools and resources law enforcement and prosecutors rely upon.”

“The governor gets it right when he says it has to be a comprehensive approach where we pull everyone in and share information,” Marthage added. “What’s missing is a lot of the issues he talks about as being issues are not things he can change on his own or by his directive. He talks about all of us being at the table, but there’s no mention of how we will educate our lawmakers around the issues that the front-line people in Vermont are addressing. That includes law enforcement, business owners and the people living with these crimes daily. That’s where it misses the mark. Until those change, nothing will change.”

The governor’s plan states that “the Vermont State Police has been, and will remain, available 24-hours a day, 7-days a week and 365-days a year for call-outs to assist with large cases, special teams and specific circumstances.” Special teams from the Vermont State Police will be temporarily assigned to coordinate with federal partners and municipal police departments as necessary to help confront, stop and prosecute the surge in gun- and drug-related criminal activity.

The state police will be contacting retirees below the mandatory retirement age to gauge their interest in augmenting the special teams and backfilling vacancies on a temporary basis. The Attorney General’s Office, in collaboration with the Office of States Attorneys and Sheriffs, will assign prosecutors to focus on major crimes, including violence associated with drug and human trafficking.

The plan states the judiciary “must eliminate” its backlog of cases “in a timelier manner to ensure the swift delivery of justice to which all Vermonters are entitled.”

Terry Corsones, Vermont State Court Administrator, told the Reformer the state courts are working through the backlog, a result of the COVID-19 pandemic and its consequences, including court staffers quitting or retiring and standing up a remote hearing system from scratch.

“Jury trials were basically halted for a year, and then each court had to come up with a plan, primarily having to do with the HVAC levels,” she said.

Each courthouse had to be configured to take into account social distancing, both in the courtrooms and in the jury rooms, said Corsones.

“Then, in conjunction with that, implementing all the remote hearing equipment and connectivity and figuring out the logistics. That added to further delays just because we weren’t able to schedule as many hearings as we were pre-pandemic.”

The governor’s office also called for an expansion of the Vermont Intelligence Center into a statewide crime center to monitor and report, in real-time, on serious and violent crime for the most effective deployment of limited resources and to analyze crime data and trends. Additional support from federal agencies and the Vermont Legislature may also be required, according to the plan.

The governor will also appoint a director of violence prevention who will be tasked, among other things, with working with the Agency of Education and school safety teams to address school violence and develop a streamlined response and reporting system for threats.

“The director will also work with the attorney general, the states’ attorneys and sheriffs and the departments of health and mental health to maximize the use of [Extreme Risk Protection Order] laws statewide,” states the plan.