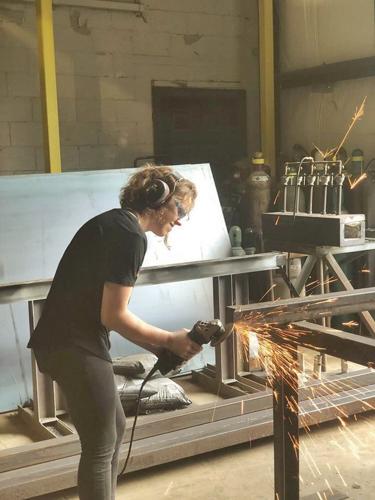 Frida Rosner, daughter of an Austin Design staff member, grinds steel for the new bus stop at Great River Terrace as part of the volunteer effort. 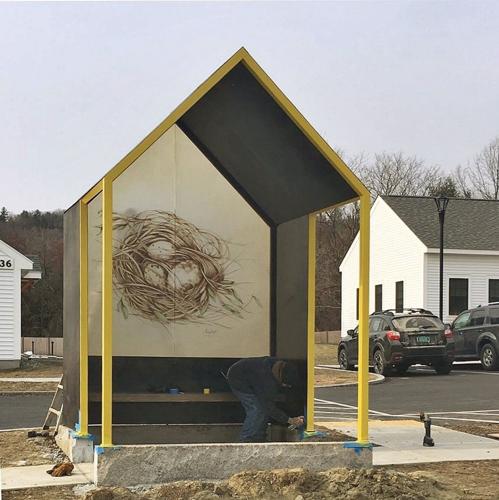 Frida Rosner, daughter of an Austin Design staff member, grinds steel for the new bus stop at Great River Terrace as part of the volunteer effort.

"The eggs in the nest spoke to this nurturing and protecting, which is where we started with the design for the bus shelter," said Bryan Louisell, architectural designer who works for Austin Design.

Local artist Laura Zindel donated her art for the project and craftsman Gordon Moore of Windham Architectural Metals in Whitingham provided materials and help with the build.

Another thing had been on the mind of designers.

"If you think about the shape of a home especially in this area, it's this gable form and the bus shelter form is really that form distilled down to its absolute essence with really no other details," Louisell said. "It's like the home button on your browser."

He called the project timely for Moore, who had just found out when the project started that his brother who had been homeless in Los Angeles had died.

"We love it," she said. "Laura Zindel. Her work is so beautiful and I think they did a really nice job. I love the image they chose."

Louisell coordinated contributions from other local groups throughout the summer and fall to create the bus stop at the housing trust's newly completed permanent supportive housing complex on former Lamplighter Inn property on Putney Road. The steel frame has "a translucent super-graphic panel" with Zindel's artwork, according to a press release.

Bridgewater said the image had a sense of "this earthiness of Vermont but also just the metaphor of a nest being a home."

"So it just feels very welcoming," she said. "It feels like a beautiful piece of art at this wonderful community resource and we thought they did a really lovely job."

Site coordination and preparation were handled by Stevens & Associates with GPI Construction, both of Brattleboro. Other help came from Awesome Graphics of Rutland, Stephen Proctor Ceramics of Brattleboro and D&E Tree Company of Guilford.

Austin Design said it made the "site-specific structure" to reinforce the idea of community place-making. The firm has offices in Brattleboro and Greenfield, Mass.

"With a dedicated bus stop on The Current's White Line, access to public transportation is ensured; this presented an opportunity to inspire and engage the community through functional public art," Austin Design said in the press release. "Deploying architecture at the scale of furniture, the new bus shelter evokes the familiar gable shape of a home, and acts as a tangible tribute to the mission of community supportive housing."

Louisell said his group intends to do more projects of the kind — whether that be bus shelters, information centers or weigh stations.

"It's sort of architecture on a small scale but it's not just for a particular space; it's to promote community involvement and the arts," he said.

Austin Design employees learned how to weld for the project, Louisell said, adding that his firm usually has other groups handle the fabrication.

"So we had a staggered lease starting in July," Bridgewater said. "I don't have the exact date when we rented the last apartment but I believe it was either late September or early October. We're really excited about the sense of community that's forming there. The community room, the building in the middle, is being utilized for a lot of different programming and people are participating and I think finding that really helpful."

Groundworks Collaborative and Health Care & Rehabilitative Services of Vermont also have staff in the complex. Services are voluntary but Bridgewater said "quite a lot of residents" are participating.

"It's been an inspiration to witness the sense of community being developed among the residents," she added later in an email. "We now know from research that loneliness and isolation can dramatically impact health and well being. So in addition to the individual support that residents are receiving, the community relationships that are forming are having a positive impact on people's lives."