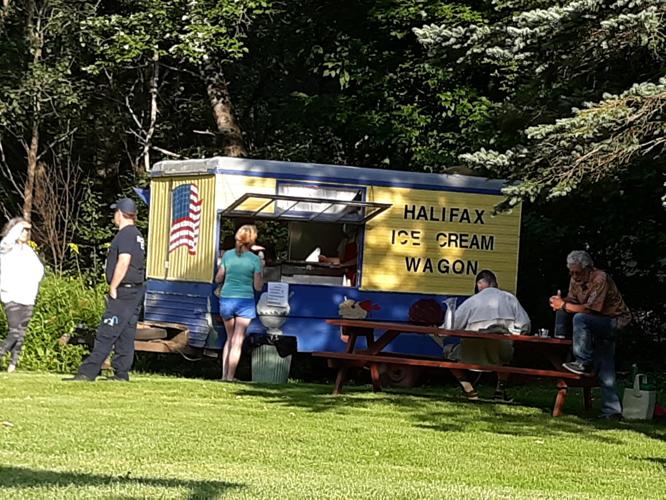 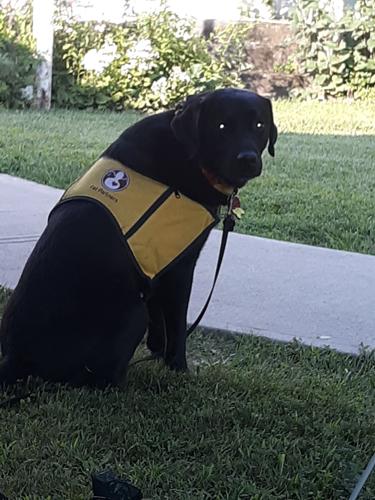 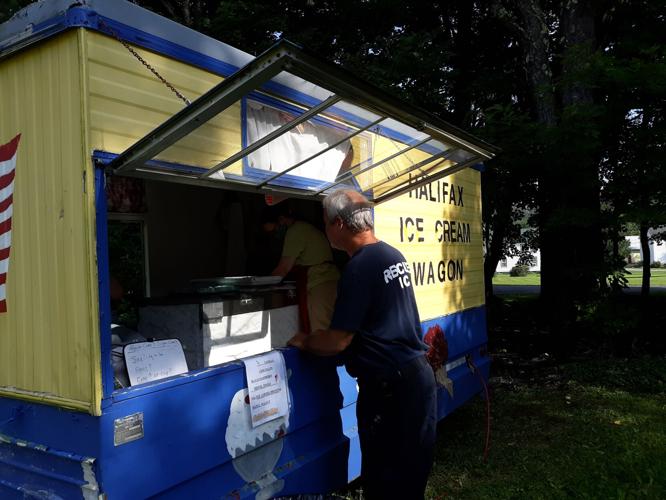 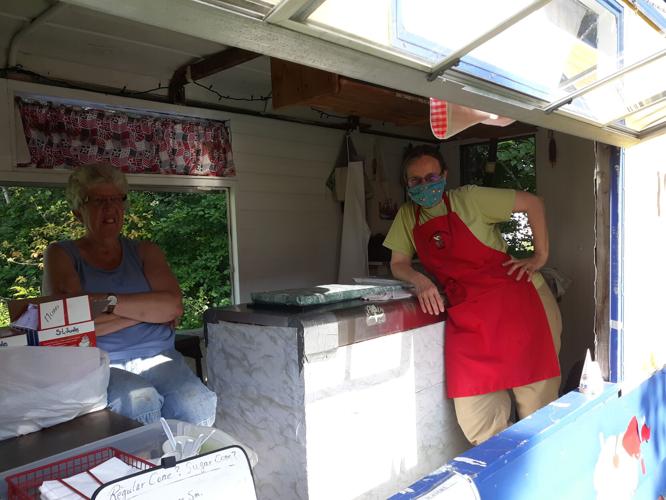 HALIFAX — More shots to guard against COVID-19 went into arms thanks to what was part ice cream social, part vaccination clinic.

“Some people made it a family night out with one or more parents getting vaccinated and the whole family getting ice cream,” Linda Lyon of Halifax said.

She estimates that about 25 people were vaccinated against COVID-19 between the two clinics in Halifax on July 23 and Friday. Some patients received the one-dose Johnson & Johnson vaccine and others got their first or second dose of Pfizer or both.

Free ice cream was served by the Halifax Community Club, staffed at both clinics by Joan Coarser and Laurel Copeland. Also attending the clinic was Lyon’s dog Kelso, a therapy dog credentialed by the national organization Pet Partners.

Lyon said she hopes the clinics “inspire more communities to sponsor fun events to encourage more people to get vaccinated.”

Vaccinations were provided by trained personnel in a mobile clinic run by Rescue Inc. and supported by the state. Rescue has offered similar clinics in other communities.

“Rescue said at this point in vaccinating Vermonters, anything more than 10 is quite the success when they’re going to these smaller towns and it’s not a targeted population like farmworkers,” Lyon said.

Select Board Vice Chairman Pete Silverberg organized the clinics and the board unanimously approved pursuit of the project.

“Pete contacted the state and Rescue, and is impressed at how easily one phone call can set up a vaccination clinic,” Lyon said, describing how Rescue comes with a fully outfitted trailer, seating and staff to run the clinics.

Halifax might have a lower vaccination rate than the state average, Lyon said.

“We can’t really know for certain because the state provides the data of vaccinations based on zip code and more than half of Halifax has zip codes for other towns,” she said. “Even if you correct for what is attributed to Halifax, one gets the impression that we have a lower vaccination rate.”

“Some people were on the fence and decided they were ready, and having it in their community helped them come out to get vaccinated,” she said, calling Rescue staff “very responsive” as they addressed worries and answered questions. “They’re a big part of the success not only for providing it but being so informed about the science, and why it’s safe and important.”

With permission, Lyon brought Kelso who helped with someone who was hesitant about getting vaccinated.

Some people visited with the dog before or after getting their shots. The Labrador Retriever got a lot of attention, Lyon said.

“He’s very relaxed around children and adults,” she said. “He just loves people.”

Lyon credited the success of the clinics to different aspects including how it was a fun community/family event in a comfortable space outdoors with access to indoor bathrooms. She suggested the possibility that other towns might undertake similar efforts.

Outreach is important, Lyon said. The clinics were advertised via the town website, Front Porch Forum, newspapers and a placard at the town office.

Most but not all of the patients were from Halifax, Lyon said. She remembered how a person from Massachusetts came because someone who attended the first clinic suggested they come to the next one.

Another person from Hinsdale, N.H., saw a clinic on their way home from work. The person wanted to get vaccinated but with their wife and asked Rescue about future clinics, Lyon said.

Not wanting to pry, Lyon didn’t ask if patients came because of the ice cream. But she does believe it made a difference when seeing families who came out together.

“It made it fun,” she said. “It was never a big crowd but you’re talking about Halifax, a town of 700 people.”

Some people stopped by to mingle, Lyon said.

“It was a success,” she said. “We had more people than the state might have expected for such a small town and for being a state that is so [vaccinated].”

On Monday, Gov. Phil Scott tweeted that 85 percent of Vermont’s population who are 12 and older have started the vaccination process. About 467,650 Vermonters have received at least one dose.

In Windham County, more than 78 percent of the eligible population has started or completed the process.

“While vaccination rates are high in Vermont, we still have work to do to protect people from COVID-19,” said Christopher Finnell, COVID Vaccination Program coordinator at Rescue. “Vermonters have done a great job protecting each other from this virus through masking and getting vaccinated. With that being said, we must remain vigilant against a microscopic enemy that continues to mutate and becoming more infectious. The vaccines have been proven to work; they are protecting those that have been vaccinated from serious illness.”

Rescue’s mobile clinics have been able to bring COVID-19 vaccines to remote areas with limited access to traditional vaccination locations, Finnell said. Finnell called the Halifax clinics “a prime example of the work that has been done by our team of dedicated members.”

“Several of the people who received their vaccines in Halifax stated that had clinic not been there they would not have gotten vaccinated,” Finnell said. “Rescue’s effort is about making it easy for people to get vaccinated.”

Finnell estimated that in the past month, Rescue vaccinated about 500 additional people. A list of walk-in clinic sites can be found at healthvermont.gov/covid-19/vaccine/getting-covid-19-vaccine.

Silverberg thanked Rescue for “the easy access and very professional operation,” and the state for making the clinics possible.

“Rescue Inc. seemed to be satisfied with the results and so am I,” Silverberg said. “It is difficult to figure out how much impact the mobile clinics had on the vaccination rate in Halifax. The state of Vermont uses zip codes to track where the vaccines are going and more than half of Halifax households use a zip code other than Halifax. Using average statewide data as a baseline, the clinics might have vaccinated as much as 15 percent of the eligible unvaccinated population in Halifax and I think that is a win.”

Your Thanks: Successful vaccination clinics in Halifax

To the editor: The town of Halifax recently hosted COVID-19 vaccination clinics and ice cream socials. There are many people - and one dog - t…