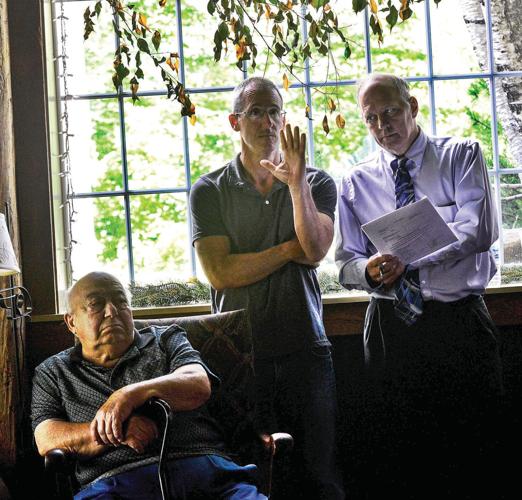 Mario Tenaglia puts in the winning bid for the Sawmill Farm, in West Dover, on Monday.KRISTOPHER RADDER - BRATTLEBORO REFORMER 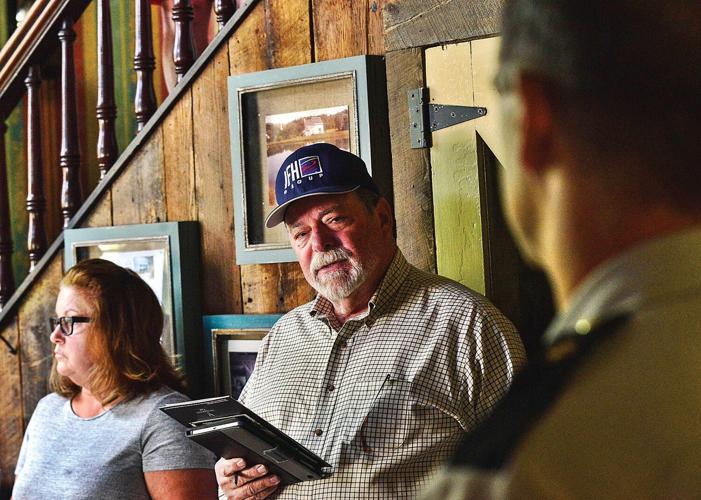 Gary Richetelli, of Chase America Mortage, puts in an offer of $1,150,000 for the Sawmill Farm, in West Dover, on Monday.

Mario Tenaglia puts in the winning bid for the Sawmill Farm, in West Dover, on Monday.KRISTOPHER RADDER - BRATTLEBORO REFORMER

Gary Richetelli, of Chase America Mortage, puts in an offer of $1,150,000 for the Sawmill Farm, in West Dover, on Monday.

But in the end, the Hermitage Club property foreclosed on at 7 Cross Town Road in West Dover was auctioned off to the current mortgage holder, Ivmja LLC of Wildwood Crest, N.J., for $1.2 million. The approximately 18-acre parcel includes the inn, the Carriage House, the Williams House and two smaller cabins.

Ivmja had filed a foreclosure complaint against the Hermitage and paid delinquent taxes to avoid the town's last tax sale in December. Altogether, Ivmja claimed it was owed more than $1.36 million for the mortgage and other fees.

The property was purchased by Ivmja for $1.35 million in late 2010 and assessed at $2,307,230 by town listers this year. The second highest bid at the auction was $1,150,000 and it came from Gary M. Richetelli, president of the Orange, Conn.-based Chase American Mortgage.

"We might get it up and running again," Mario Tenaglia, of Ivmja, told the Reformer.

A family had run the inn for several years before the Hermitage purchased it more than three years ago. Tenaglia's two brothers own the Jolly Roger Motel in Wildwood Crest.

Tenaglia said he had hoped the Hermitage would keep the inn open and running.

"Not the ideal situation," he told the Reformer. "But stuff doesn't work out sometimes, right?"

At the auction, Tenaglia offered $1,132,000. Then Richetelli made his $1,150,000 bid. His group Chase American is described online as an organization primarily operating in mortgages, and buying and selling businesses.

Tenaglia made a short phone call and returned to bid $1,200,000. Richetelli asked about what taxes will be owed by the new owner. Brattleboro attorney David Dunn, representing Ivmja, said it was approximately $52,000 or $53,000.

The bidding closed and attendees applauded. More than 10 people showed up for the auction.

"Well, thank you everyone" said Windham County Sheriff Keith Clark, who ran the auction. "As you can all imagine, there will be more of these coming up."

The Hermitage also is facing foreclosure complaints initiated by Berkshire Bank and Robert Grinold. The Berkshire Bank mortgage includes properties in Dover and Wilmington such as the Hermitage's private ski resort at Haystack Mountain, a golf course, four inns and town homes. Grinold holds the mortgage to the White House Inn in Wilmington.

Interim Hermitage President Bob Rubin told the Reformer he would serve in "a limited role" during Monday's auction. He said he would be handing the keys over to the highest bidder.

After the auction, Rubin told the Reformer he thinks the company founder Jim Barnes is optimistic about restructuring efforts at the Hermitage.

Linda Sherman, town assessor, told the Reformer she thought the Hermitage was trying to subdivide the property in an effort to sell the Carriage House and the Williams House.

"But that's not gone through because as far as I know, I haven't received a permit for the subdivision," she said.

Clark counted about three or four people who had come to the Inn at Sawmill Farm property during a pre-sale walk through of the property on Friday. He told the Reformer the confusing part about the auction had to do with concerns from Reinhart Food Service LLC, a lienholder which claimed the Hermitage had defaulted on a $1.3 million note and should return kitchen equipment at the inn.

Clark said Reinhart came forward after the sale had already been scheduled. Judge John Treadwell then scheduled the hearing with Ivmja for Friday to determine the value of the equipment.

Dunn arranged for the auction to be broken into three parts at first. Bids were entered for the stainless steel kitchen equipment, personal property and furnishings, and the real estate properties of the parcel. The final auction was for all of it.

"Essentially as I understood, it was a way to determine the value of those components, the kitchen and the personal property that someone else might have said, 'We have a lien on that,'" said Clark.

He said separating out the components was beneficial to the property owner because now he knows how much Reinhart will want for its equipment to remain inside the inn.

Jeff Peters, of Reinhart, had offered $10,000 for the equipment alone, the highest figure in that auction. Tenaglia had the highest bid for the real estate and personal property, $1.1 million and $20,000 respectively. By offering a sum higher than the three separate bids combined, Tengalia ultimately won the auction.

Barry Reardon, of West Dover, had been the only other person who signed up to enter bids. He did not make any.