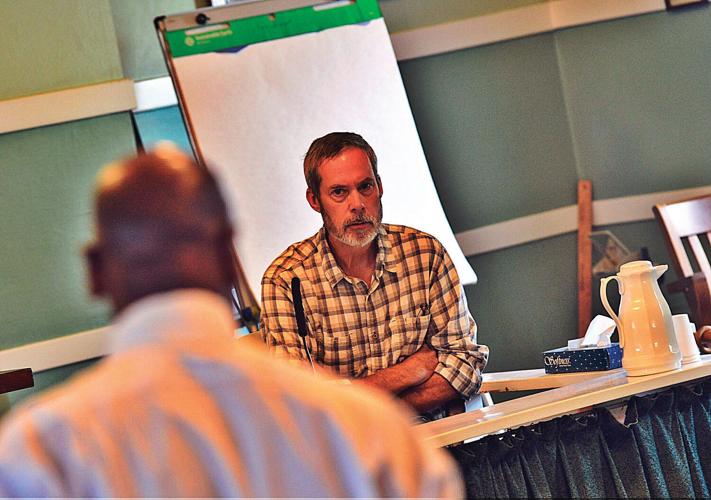 Melvin Mayo questions Alex Wilson while he takes the stand during a civil trial about a property dispute with the Friends of the West River Valley Trail on Monday. 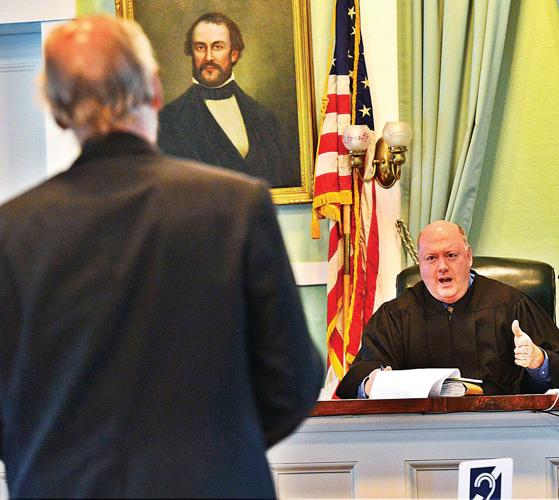 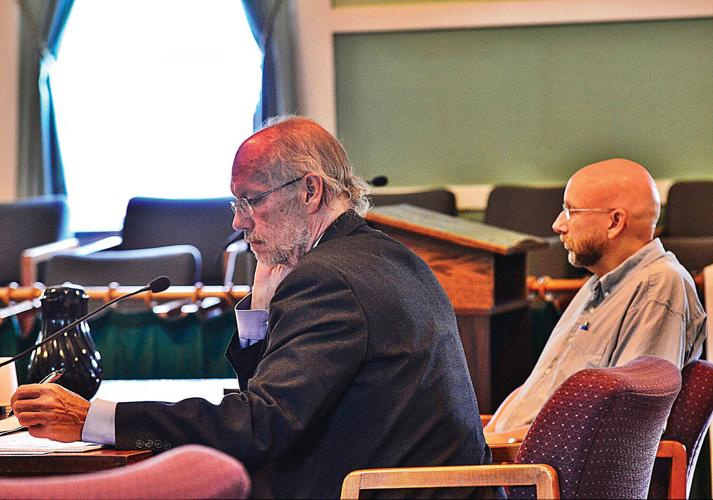 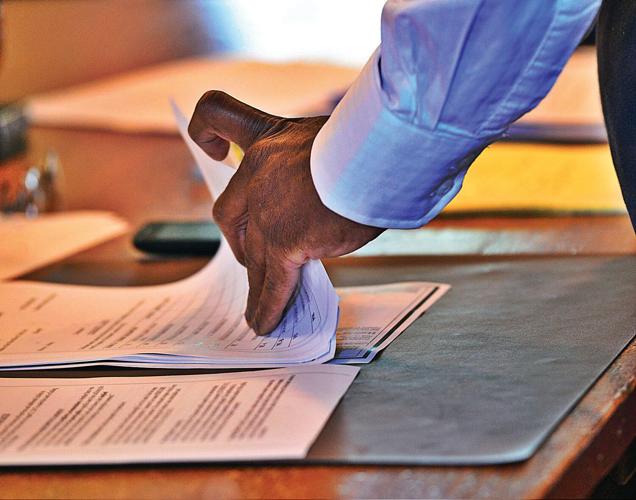 Melvin Mayo looks through paperwork during a civil trial about a property dispute with the Friends of the West River Valley Trail on Monday. 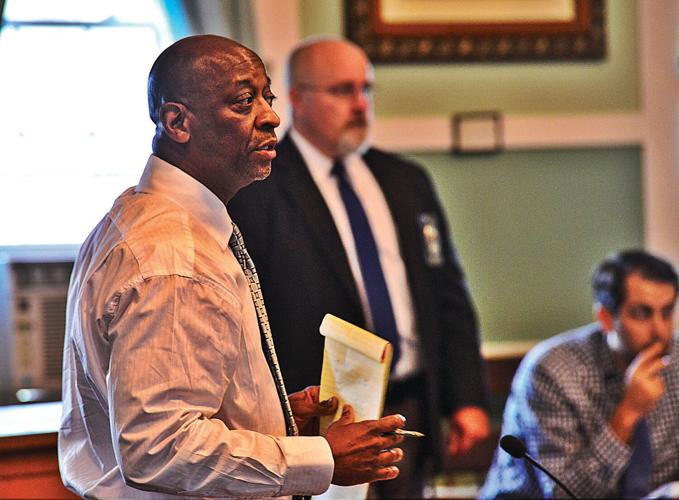 Melvin Mayo questions Julia Chase while she takes the stand during a civil trial about a property dispute with the Friends of the West River Valley Trail on Monday.

Melvin Mayo questions Alex Wilson while he takes the stand during a civil trial about a property dispute with the Friends of the West River Valley Trail on Monday.

Melvin Mayo looks through paperwork during a civil trial about a property dispute with the Friends of the West River Valley Trail on Monday.

Melvin Mayo questions Julia Chase while she takes the stand during a civil trial about a property dispute with the Friends of the West River Valley Trail on Monday.

NEWFANE — Future access to a trailhead on the West River Valley Trail hinges on the outcome of a trial held Monday.

"I'm not going to make a decision about this at the end of the day," Judge John Valente said. "We're going to have a written decision so everyone knows, to the best they can, my thinking behind it."

The non-profit group Friends of the West River Trail and Dummerston resident Melvin Mayo are engaged in a property dispute. The argument is over ownership of land on Rice Farm Road.

The trial began in Windham Superior Court, Civil Division on Monday morning with local residents talking about how long they have known the path to be in use and whether they had been affected by no-trespass signs or other barricades over the years. FWRT was represented by attorney Paul Gillies.

Brattleboro resident Jon Knickerbocker, who owns the Vermont Canoe Touring Center, recalled using the trail in the early 1980s. Most recently, he went on the trail in early July.

Brattleboro resident Julia Chase, who has been using the trail since 2002, said she would occasionally see no-trespassing signs.

"It was my understanding that the signs came and went," she said, adding that they did not discourage her from using the trail and she would find other access points at times.

Mayo, who represented himself at the trial, asked Chase if she felt like she was trespassing when she saw the signs.

"It was my understanding it was used by the public based on other people's use," she said.

Alex Wilson, a member of the FWRT Lower Section Committee, remembered "efforts to formalize the trail" beginning in the spring of 1996. An approximately 20-acre parcel in Brattleboro came on the market and a group consulted with the Vermont Land Trust before purchasing it. That group then learned FWRT had already been working on another section of trail along the river. The Lower Section Committee aligned itself with the nonprofit and conducted trail work, including drainage improvements and mowing.

A lawyer told Wilson the easement his group thought it was getting for $500 had actually been ownership of a railroad bed.

"That was a surprise to us," Wilson said. "We were pleased."

He admitted his group did some trail work on the land in question before Mayo bought his parcels in Dummerston and said he thinks permission would have been sought had group members believed it belonged to someone else.

Wilson recalled previous owners chasing people off the property and posting no-trespassing signs. He said those things did not discourage him from using the trail.

Brattleboro resident Jason Cooper, who has been using the trail since about 1992, said the number of signs has increased since Mayo took ownership of a parcel by the trailhead.

"There have been piles of sticks and most recently, a fence went up," Cooper said. "So there's been an attempt to dissuade use."

Cooper read a letter from Mayo to FWRT that served as a no-trespass order for his property on Rice Farm Road.

"I don't see [the trail] as part of his property," Cooper told the court. "And most particularly, after the last court hearing, this court specifically said that the land was not his. I felt reinforced by that. That's why I had no particular problem using it."

Summary judgment was granted in part and denied in part to FWRT on June 30. Valente wrote that Mayo's deeds did not convey to him the portion of a northern section of his property from the eastern edge of the old railroad bed to the West River. He also said an easement from the Brattleboro & Whitehall Railroad Company was extinguished after the railroad bed was taken out in 1930s, reverting back to the original owners. The trial on Monday was largely about whether the public has a right to use the land.

Cooper said the judge's decision says Mayo's deed only goes to the edge of the railroad bed and does not include it.

"In that decision, did it come to you that the FWRT did not own the trail?" Mayo asked Cooper.

"No," Cooper said. "I did not understand that to be decided in that document."

When asked, Cooper admitted to moving the fence Mayo had put up.

Brattleboro Bicycle Shop co-owner Barbara Walsh said she once encountered a man and his son on the trail.

"They were warning people off the trail," she added. "I definitely was a little discouraged after that."

A few years later, Walsh began going to the trail again. She estimated using it about three to four times a year.

Brattleboro resident Henry Lange said he believed he started using the trail in the early 1980s and would regularly see barriers, tape, wire and "hand-scrawled" no-trespass signs. That did not discourage him from using the trail.

"I know the trail has been used recreationally by the public since the 1930s," said Malcolm Moore, a land surveyor who's on the Lower Section Committee.

After a short break, FWRT's expert was called to the stand. Land surveyor Eric Morse spoke of several deeds, which were entered as exhibits.

"I found that the [town] tax map to be in error, which is common for tax maps," he said.

Mayo owns two parcels in Dummerston. FWRT believes it owns two acres while Mayo owns the other two acres of a four-acre parcel. Members of the group said they want to keep the trailhead open for the public.

Levi Bailey's 1886 deed was referenced to show that when the land was transferred to later property owners, it did not include the railroad bed. Since the railroad was abandoned in 1936, Morse said, he thinks the land would now belong to Bailey's successors. The deeds have gone through several title changes over the years.

Mayo called witnesses to the stand after lunch.

Peter and Paul Burdo both grew up in the neighborhood. Peter remembered a previous property owner posting signs. He had sought permission to use the trail to get to a swimming area.

Paul had once felt guilty about an episode.

"I was conscience stricken," Paul said, and then he bumped into the property owner in Brattleboro a few weeks later. "I was relieved to apologize and we kind of made up. He had a kind response and was nice."

On the history of the trail, Paul said, "I think people just discovered it."

Michael Kohout, who lives on Quarry Road, said he had been caught skinnydipping with his wife by a previous property owner. He expressed some remorse.

"Some people would say, 'He doesn't own down to the river. What right does he have?'" Mayo said.

Kohout described his attitude on the matter as "land belongs to the people living there."

Dummerston resident Jean Momaney, who served as zoning administrator of the town for 20 years, recalled previous owners putting up barricades and signs.

"It was always entertaining to go by and see what had been added," she said.

The former railroad bed goes through Momaney's yard. When Mayo asked whether FWRT "claimed" her property, she said, "They probably would but they haven't told me that."

Jason Doubleday's family moved to Rice Farm Road in 1960. When he moved back in 1978, he built a house on the former railroad. He has put a sign up.

"The number of people using the trail was increasing and I was concerned that if someone got hurt there, I might be liable," he said. "So I put the sign up informing people that I thought it was private property and people should use it at their own risk."

Doubleday said he came to the conclusion alone that he owns the former railroad bed. He has granted trail users permission to use his property but acknowledged there were "undoubtedly" people who did not get his blessing.

In lieu of closing arguments, Judge Valente asked both sides to send written documents to him within three weeks. He suggested that since all the evidence was in, the parties might be able to come to agreement without his further involvement. He thanked them for "being efficient."

"I thank you for being so prepared," Valente told them. "Thank you also for having your information beforehand. It helped a great deal as I listened to the testimony."