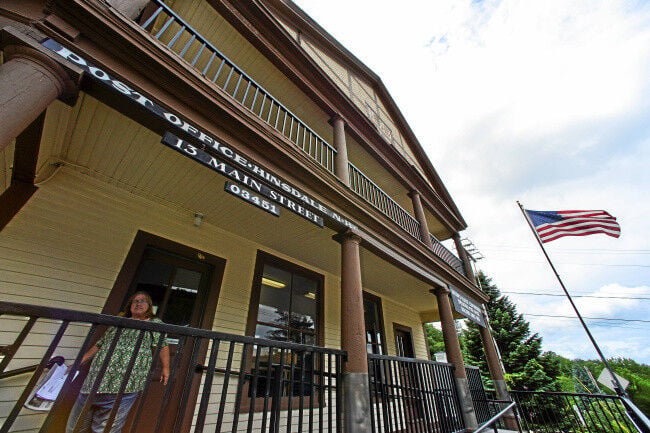 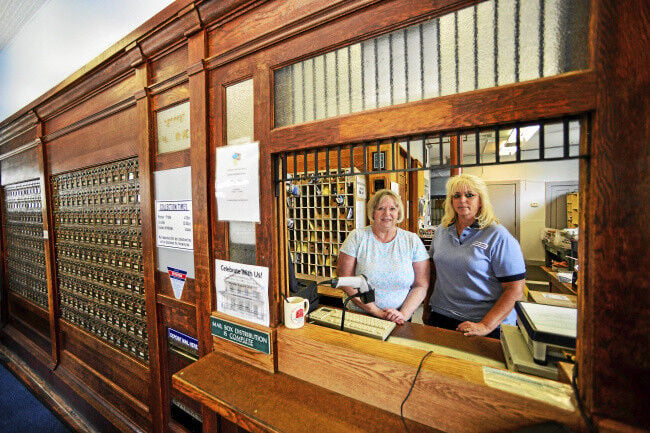 Cindy Mason, postmaster at the Post Office in Hinsdale, N.H., and Brenda Martin, clerk, stand at the main window on Tuesday. 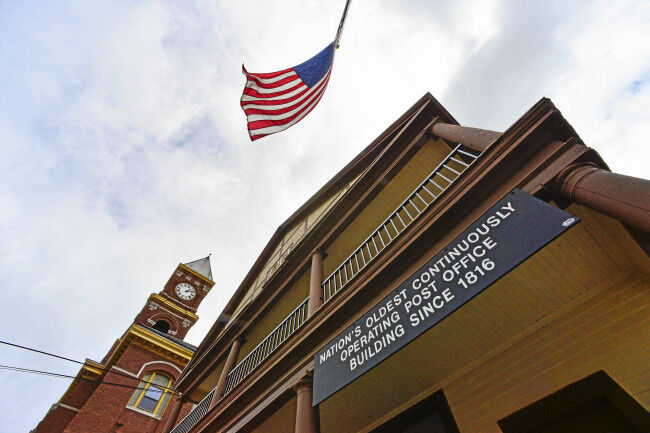 Cindy Mason, postmaster at the Post Office in Hinsdale, N.H., and Brenda Martin, clerk, stand at the main window on Tuesday.

HINSDALE, N.H. >> On Thursday, Aug. 4, the Hinsdale Post Office, the oldest continuously operating post office in the United States, will be celebrating its 200th birthday, and the public is invited to the party.

"We would like to have as many people as would like to come, to share with us," said Hinsdale Postmaster Cindy Mason. "The town band is going to play, and we're going to have a wonderful cake."

The post office has created T-shirts and tote bags to commemorate the event, as well as a special hand-stamped cancellation.

"We asked the high school to help us with designing the cancellation and we could only pick one," Mason said, "but we put all of them on the back of the T-shirt and tote bags so all the students could get recognition."

The party, at 2 p.m. on Aug. 4, will also celebrate the post office's rain garden at the side of the building. Mason explained that the rain garden catches runoff from the roof.

"The rain garden was a project of the Environmental Protection Agency and the Postal Service," Mason explained. "We partnered to get the water coming off the roof so it can be filtered down to help protect our water sources. We did that last September — we put in over 500 plants."

Mason noted that other post offices in the country have operated for longer than Hinsdale, but not in the same facility. The Hinsdale post office has operated continuously in the same building since 1816.

"The first postmaster here, Nathan Babbitt, was appointed in 1815. He was the one who had this building built," she said. "There was a general store here, and the post office occupied a small corner in the front. There were other businesses here, and as Hinsdale grew and the needs of the post office increased, we started taking over more of the building, and now we have the entire downstairs.

"The building is owned by Edwin Smith — we lease this part," she continued. "We have a long lease, and I'm sure it will be re-upped with the historical value here."

The Hinsdale post office is open from 6 a.m. until 5:30 in the evening. While the window is open continuously from 9 to 5, customers can also come in earlier or later to pick up mail from their post office boxes.

"It's great, because there are customers who work out of town or can't get to their mail every day from 9 to 5," Mason commented.

The last few decades have brought dramatic changes to the Postal Service.

"I see that first-class mail volume has decreased — there's no question — because of opportunities to pay online and other options that people have," said Mason. "They don't have to put a stamp on an envelope and send it in to make their payments. What I see is an increase in parcel business. That is mailers who send out catalogues to folks who can then go on line, and the package can come through the mail to be delivered."

The Postal Service gets a share of the new parcel business by partnering with private companies.

"Then we have FedEx and UPS that will drop packages here, and that's usually after the carriers have gone, so that's usually for delivery the next day," she went on. "We do 'the last mile' so UPS and FedEx don't have to go to the same houses that we already go to six days a week."

The Postal Service itself has entered the online environment.

"There's a lot of postal business that you can do without actually coming into the post office," Mason explained. "There are places like usps.com where you can search for a zip code, you can print labels to make packages, and you can request a pickup and the carrier can pick up those packages and bring them back to the post office, and they go out that day — and you've never left the house in your pajamas."

The Postal Service's program allows the customer to determine the postage and pay for it online.

"It prints out a label with the barcode with where it's going and the class of service, and the package is all ready to go out," said Mason.

The Postal Service has also decentralized its operations by establishing what it calls "contract postal units."

"That could be a general store that has room, and they can provide certain postal services, and they might even have postal boxes, and they fill the post-office boxes and customers can come in and get their mail even if there's no post office in their small community," Mason explained. "These little units provide service closer to the customer so they don't have to drive all over the city or 15 miles in the country to where the main post office is."

Mason herself has held a variety of position in the Postal Service.

"I started out as a clerk and was a postmaster in another small office, and then in my next job I was a retail manager," she recalled. "I worked with post offices and their windows — how they look, the computers at the window, working on training people. It was great because you did so many things that were related to the customer.

"My next job, being the marketing manager in the New Hampshire-Vermont district, was also great," she continued. "I had the same interaction with the lobby and customer service, but I also got to deal with customers who mail in bulk."

When the New Hampshire-Vermont district was merged with Maine, Mason's position was eliminated. She had been traveling to Manchester, N.H., from her home in Greenfield, Mass., so she was happy to find a position closer to home as Hinsdale's postmaster.

"Everything has gone around full circle," she said. "This is the microcosm of my other jobs, because as the postmaster of this office you deal with everything. It's coming back home and it's a wonderful thing.

"I think that there is a lot of change in our future, and people can look at that as a challenge," she commented. "I can't know what all the changes are going to be, but I think that any time you have an opportunity to change and grow it's a good thing. Nothing ever stays the same, and we should welcome and embrace those opportunities."

Maggie Brown Cassidy can be reached at mcassidy@sover.net.