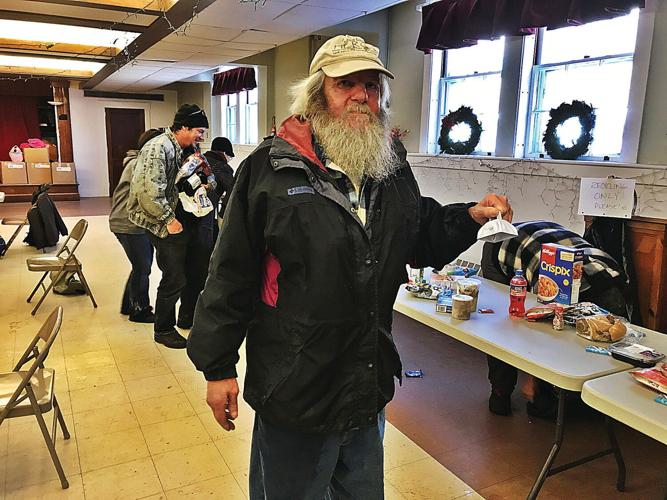 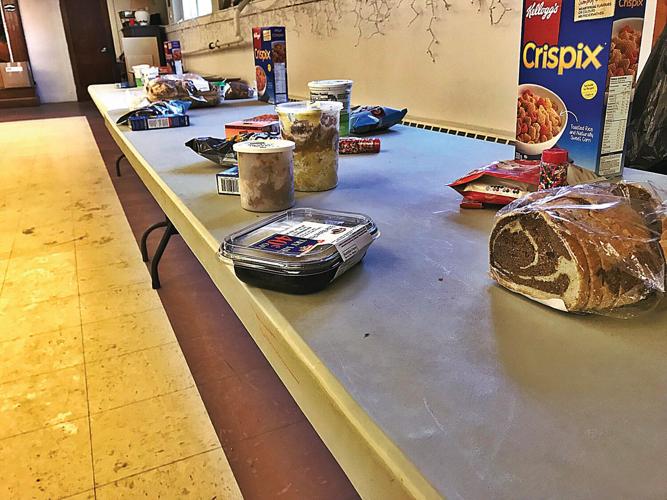 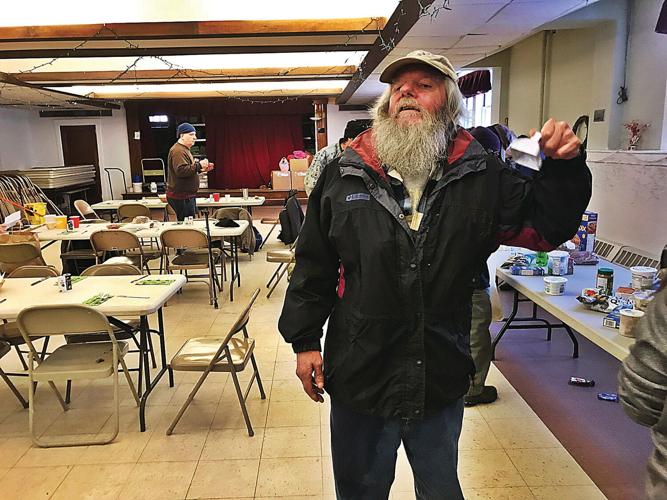 BRATTLEBORO — Kevin Regan found housing with the help of local programs after 10 years of homelessness.

Regan said he cannot work due to health issues but he used to shovel for businesses on Main Street. Now, he gives local homeless individuals Christmas presents donated by local businesses.

But in another role, he sounds the bell to signal food packages can be taken by clients at Loaves & Fishes, a meal service program at Centre Congregational Church on Tuesdays and Thursdays. Hot meals are also served, from 11:30 a.m. to 12:30 p.m.

"Our clientele is a pretty broad range of Brattleboro's bottom end of the economic ladder," said John Moriarty, who has volunteered at Loaves & Fishes for about seven years.

He said clients may be unemployed or underemployed, or have substance abuse or psychiatric problems. He finds the neutral territory to be "really gratifying" as outside issues are not typically brought into the church's basement.

"People come in ahead of the services," for coffee, warmth and support, he said. "All in all, they're a pretty grateful bunch of people. You become aware of a pretty complete subculture and for the most part, it's pretty invisible. You see numerous exemplars walking from the library to Flat Street."

One client told Moriarty the meal services can be a big help with keeping his family's finances intact.

Robert Oeser, another volunteer at Loaves & Fishes, said he distributed copies of a survey when local hospitals worked together on a Community Health Needs Assessment.

"I noticed they were untouched," he said. "I asked of one of our guests. He said he saw them but 'didn't think they were for us.'"

Eventually, Oeser encouraged 30 people to fill them out. He said one respondent checked off a box indicating they suffered from a number of health issues and wrote in "a complete sense of hopelessness — no reason to get up."

Juanita Lane, who works with homeless individuals in Brattleboro, said the first Sunday of the month is the only day without a hot, free meal available. She volunteers at Loaves & Fishes on Tuesdays.

"There is a lot of services for people," she said, noting the other meal and pantry options in Brattleboro run by Saint Michael Roman Catholic Church and Agape Christian Fellowship throughout the week.

Lane would like to see a program brought back in which a call could be made to the Drop-In Center and a willing person could be put to work for the day. A similar-sounding program has been discussed by the Brattleboro Select Board during talks this year about panhandling.

"I know a lot of them would work," Lane said.

Lane commended Groundworks for requiring elements of accountability in order for clients to get certain support services. But she worried it would take someone freezing to death before easing up requirements for a voucher system for hotels. And like others interviewed for this article, she said the space at the Drop-In Center just isn't big enough.

Temperatures dropped below 10 degrees on the day Alex Martin spoke with the Reformer and he had been sleeping outside in a tent the night before. He said he was kicked out of the shelter after getting caught smoking cigarettes. As a job, he removes snow at Centre Congregational Church.

Martin said he moved here to get treatment at the Brattleboro Retreat as he suffers from post-traumatic stress and bi-polar mood disorder. He previously lived in Newport. The worst part of his experience with homelessness, he said, has been the loneliness.

"I've kind of been pushed out of the community," he said.

Martin called for more awareness to be built around addiction, although it is not something he said he struggles with.

A woman, who became homeless about three years ago and wished to remain anonymous, said she found it difficult to find services as an older woman.

"But places like this build community," she said, referring to Loaves & Fishes while noting the warmth, food and company found there.

A man, who also asked to remain anonymous, said he had moved into an apartment after being homeless for nearly three years.

"I think there's plenty of resources in Brattleboro," he said. "They're just not used in the proper way."

He called meal services available in the community "a very good resource to have" and heard "good things" about the Groundworks Collaborative seasonal overflow shelter sited at Winston Prouty Center for Child and Family Development this year.

Marshall Patton, a volunteer at the Drop-In Center who once was homeless, pointed to a lack of activities for locals.

"There's nothing to do here in Brattleboro but get high and go to jail," he said.

He believes more can be done on outreach. He said he sees police making attempts at connecting with homeless individuals and drug users in the community. To do such work, the Brattleboro Police Department has hired a social worker and the police chief has created a task force.

Patton also would like to see more clothing available. He stressed a need for long underwear for the homeless population.

Living homeless for about three years, April Hastings sees some holes in the the system. She struggles with drugs and finds it difficult to stay sober when she loses housing.

"I feel I get more help when I'm using," she said. "It makes it really hard to want to be clean."

But being on probation, Hastings said, makes it more challenging to find housing. And without a residence, she cannot get custody of her children.

At the time of the interview, Hastings said she and her boyfriend were using vouchers to stay in hotels. With a subsidy available to her boyfriend, she believes it would be cheaper to rent an apartment.

"There isn't as much help as people think," she added.

Her job for now, she said, is staying sober. She would like to see more apartments become available and for people to be more sympathetic. She also feels the homeless population needs more advocacy.

"It gets depressing," she said. "When you feel hopeless ... you're not wanting to crawl out of the hole."

Kit Barry ties the start of homelessness in the area to 1982.

"The amount of money federally being given to state mental hospitals was reduced so therefore, the mental hospitals had to reevaluate their populations and release people because they couldn't afford to have those people with less money," he said.

Barry, who has worked with homeless individuals for the last three years, worries about a new precedent taking shape: Parents are throwing kids out of the house in their formative teenage years and 20s.

Blaming the economy, he said, is "a gross oversimplification."

"But we as a people are superficial thinkers," he said. "How does a civilian talk about what we're talking about? They can't. They're helpless. They basically feel defeated and they approach it on a superficial level."

Barry admits he does not have the answers. But, he said, he wants to find them. He worked with locals dealing with alcohol issues in the 1970s when he owned the Bushnell Block on Elliot Street before it had another owner then was demolished to become the site of the Transportation Center. He called the section of housing "the snakepit for lost people."

"I was interested in social services," he said. "That's how I ran the program."

Barry finds Vermont's social services to be superior to other states and "invitational" to people from outside from Vermont. But he wonders how to help and saw a niche at Loaves & Fishes.

"I felt an obligation for the free food I was getting," he said. "It also gave me more opportunity for observation and I learned something by rinsing dishes."

In a large volume of food being scrapped at the end of meals, Barry saw a glimpse of what he considers a wasteful, consumerist society in the United States. It prompted him to think about how a plate of uneaten spaghetti could be sent to hungry folks in South Africa. But so far, he has not come up with any solutions.

Barry believes progress is held back on a social issue when it is not faced head on. He urges those who work in social services to look more deeply at homelessness.

"They're in a position where they have power, they've got control, they can implement change," he said. "Now, the client may not respond, but so what? The point is you have to present something in front of a client that is not going to enable them."