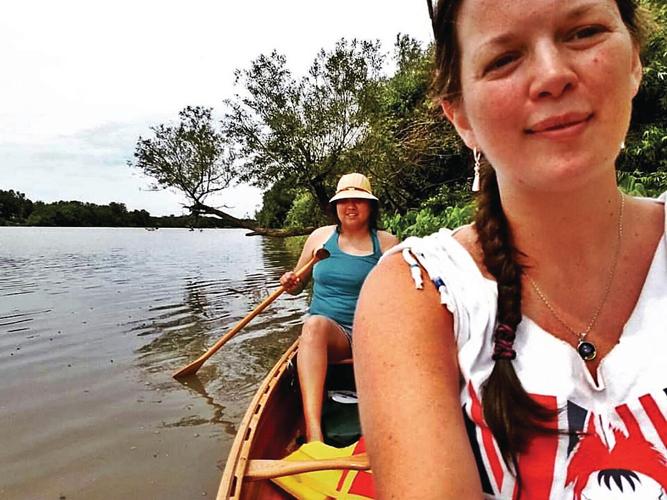 Photos provided by Jessica DolanJocelyn Antone, back, and Jessica Dolan travel on the Grand River, on a day they paddled about 15.5 miles. 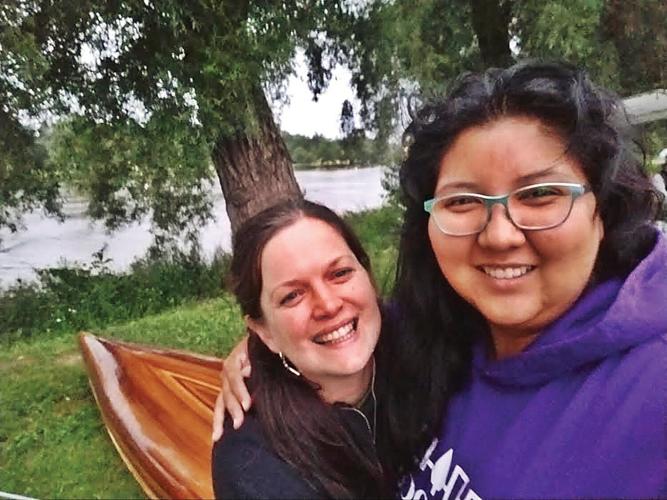 Jocelyn Antone and Jessica Dolan with the cedar strip canoe at the beginning of Two Row On The Grand, July 2017. 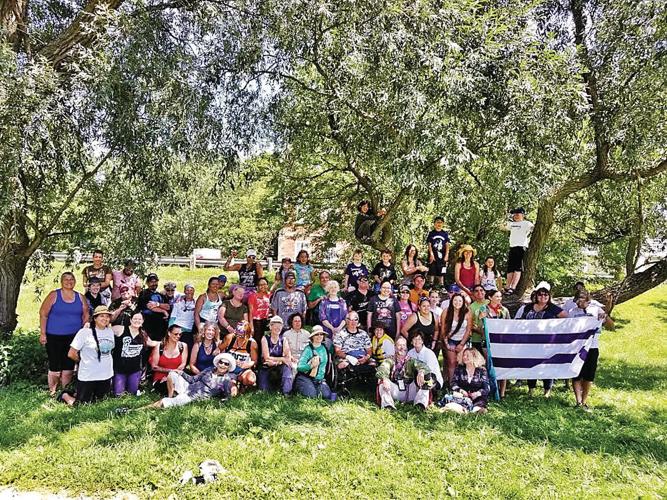 A group portrait of people who paddled together on the Two-Row on the Grand Paddle in southern Ontario during July.

Photos provided by Jessica DolanJocelyn Antone, back, and Jessica Dolan travel on the Grand River, on a day they paddled about 15.5 miles.

Jocelyn Antone and Jessica Dolan with the cedar strip canoe at the beginning of Two Row On The Grand, July 2017.

A group portrait of people who paddled together on the Two-Row on the Grand Paddle in southern Ontario during July.

In 2015, I won an Adirondack cedar strip canoe at the Putney Grammar School Raffle, at the Strolling of the Heifers. The canoe was lovingly donated to the raffle by master craftsman and woodworker Parker Sterner, of Boulder Junction, Wisc., who has two grandsons at the Grammar School — Henry and Charlie. It is just amazing — he made it. It is not only a vessel; it is a work of art.

It is especially meaningful to me because I also went to the Grammar School, from 1988 to 1990. I loved the Grammar School. It was a place that nurtured my book-smart, outdoorsy, artsy spirit. It also set me on a path to become a scholar.

But, the cedar canoe connects us to another source of hope and meaning. Let me explain. I grew up in Brattleboro, but like many Brattleboro people, I always have been a traveler. This is one of the things that led me to become an anthropologist. Also, like many Brattleboro people, I always yearned to understand the history of Native American people of the area, on whose land we are living. So, I set out to do intense, focused study of this through doctoral research at McGill University, in Montreal, Quebec.

I ended up learning from and working with the Haudenosaunee. More commonly known by a colonial moniker, the Iroquois, the Haudenosaunee are a confederacy of six Native nations: the Mohawk, Oneida, Onondaga, Cayuga, Seneca, and Tuscarora nations. Haudenosaunee traditional territories are in New York state, southern Ontario, northern Pennsylvania, and southern Quebec. Since 2008, I have been doing research projects, teaching classes, organizing conferences and workshops, going on paddles and other adventures, and participating in a number of meaningful friendships that have changed my life, with community members of the Haudenosaunee nations.

In 2013, more than 200 Haudenosaunee, other Indigenous people, and non-Indigenous people paddled in canoes and kayaks down the Hudson River. This massive paddle was to commemorate the 400th anniversary of a Peace Treaty between Dutch settlers and the Haudenosaunee at what was then called Fort Orange, in the area of present-day Albany. The treaty agreement is called the Two-Row Wampum; it is encoded with a belt of woven wampum shell beads that depicts two rows of purple beads on a field of white beads. These two rows symbolize the peaceful co-existence and non-interference agreements between the Mohawks and Haudenosaunee, and the Dutch. The three white rows signify peace, respect, and friendship, forever.

The message of the Two-row Wampum is that, while the Native people are paddling in their canoe, and the Europeans are in their ship, they should travel down the river of life together forever in peace, mutual respect, and friendship, not trying to dominate one another, living in strength and autonomy, connected by the common river that we travel upon.

The paddlers of the Two Row Wampum Renewal in 2013 paddled in two rows all the way down the Hudson River. In this way, they physically renewed the peace and friendship agreement of the treaty, and their relationship with the river and the natural world that sustains all of us. They launched at Albany, and paddled every day, camping every night, for two weeks. When they reached New York City, they marched together to the United Nations, where they spoke to an audience about the treaty agreements between the Haudenosaunee and the colonists. They reminded the United Nations that Indigenous people have not broken their side of the treaties, and that these agreements are binding, "As long as the grass shall grow, the rivers flow, and the sun will shine."

The 2013 Two Row Renewal was an awesome journey that took years of planning on the part of the Onondaga Nation, the Neighbors of the Onondaga Nation, and the Syracuse Peace Council. I participated in this paddle for three days, as a volunteer on ground crew. Every year since then, there have been other Two-Row Wampum Renewal paddles down rivers, to renew peace and friendship, and participate in cultural and environmental learning, with Indigenous and non-Indigenous people together.

The purpose of the Two-Row on the Grand canoe journey, like others, is to build peace, education, understanding, and friendship between Native American people and their neighbors. Every day, we challenged ourselves physically, mentally, emotionally, and spiritually, thereby renewing our spirits, by paddling for hours on the river. Every afternoon, a member of Six Nations or allies would speak about aspects of Haudenosaunee culture and history or experiences of solidarity, like the work people are continuing to do at Standing Rock. We dined together and camped together.

My Six Nations friends knew I was going to bring the cedar strip canoe from Vermont, and they were excited. I ended up paddling with my sister Jocelyn Antone, a Turtle Clan woman from the Oneida Nation, who is an artist and a student of the Oneida language. She taught me how to sing water songs, and elder appreciation songs in the Mohawk language. We sang with the others, and practiced singing and paddling at the same time (which is more difficult than one might imagine). It was very special to participate in the spiritual act of renewing peace and friendship by paddling with Jocelyn in the cedar strip canoe.

I write about the connections between the Grammar School, the canoe, learning, renewal, and holding the values of peace, mutual-respect, and friendship in community, because Brattleboro is approaching a landmark day: our first acknowledged Indigenous Peoples Day. This year, I also became a member of Representative Town Meeting, just so I could speak in favor of changing Columbus Day to Indigenous Peoples Day. I probably didn't need to do that, as Town Meeting passed the change unanimously.

Indigenous Peoples Day, and every day, is an opportunity to learn. There are so many ways to go about educating ourselves about Indigenous histories and cultures in Vermont and across North America (Turtle Island). First, we must start with an understanding that we have not been taught much, and what we think we know might be completely wrong. Secondly, there are many resources in the greater area of New England and New York that are good ways of learning about Indigenous histories and cultures. Throughout the year, there are festivals, cultural centers, powwows, art exhibits, and speaker series at the universities and colleges that are open to the public. I also recently worked with Abenaki scholar Dr. Marge Bruchac to compile a suggested reading list of historical and cultural resources at the Brooks Memorial Library. As Indigenous Peoples Day approaches, lets paddle in peace, respect, and friendship together as we travel down the river of life.