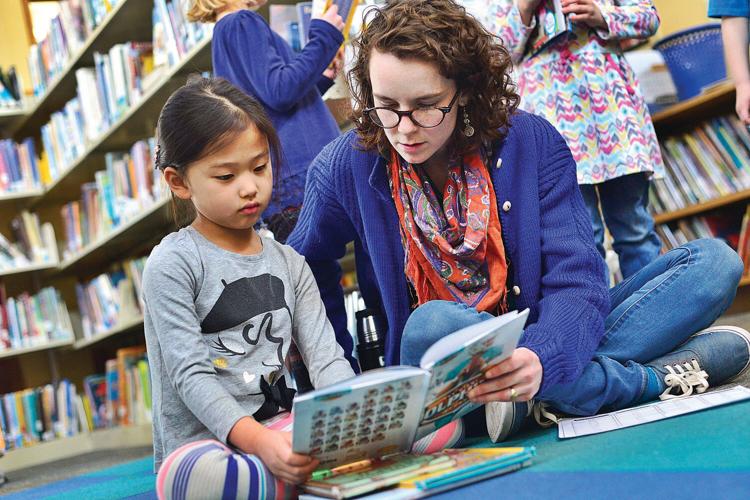 photos by KRISTOPHER RADDER - BRATTLEBORO REFORMERSarah Gamble, an intern from Antioch University New England in Keene, N.H., reads with Khando Wangchuk, 5, a kindergartner at Brattleboro's Academy School. The interns are getting a look at what their futures entail in a school-year-long stay at the Academy. 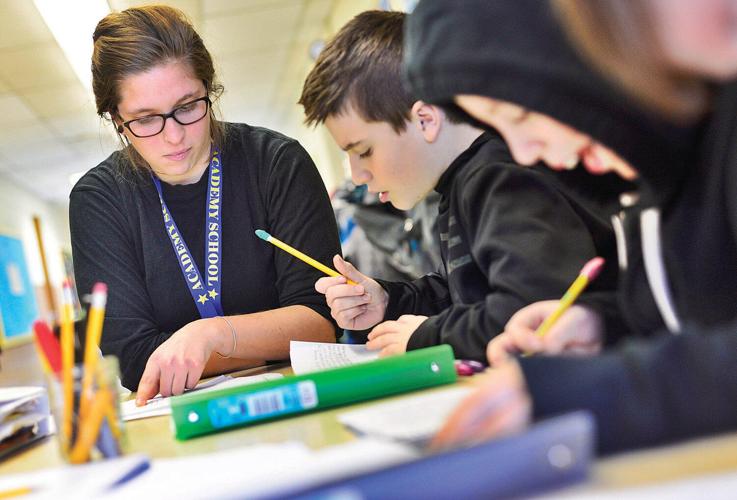 photos by KRISTOPHER RADDER - BRATTLEBORO REFORMERSarah Gamble, an intern from Antioch University New England in Keene, N.H., reads with Khando Wangchuk, 5, a kindergartner at Brattleboro's Academy School. The interns are getting a look at what their futures entail in a school-year-long stay at the Academy.

BRATTLEBORO — Three interns from Antioch University are getting a good, hard look at what their futures entail in a school-yearlong stay at Academy School.

Paciulli said the interns from Antioch University New England in Keene, N.H., are being paid as aids for half of every workday through the school district. Usually, interns are not paid and only stay at the school for a few months.

Deb Kardane, who teaches at Antioch and Academy School, said the idea for the program began a few years ago.

"We started thinking about what we can do to get more interns in classrooms for a longer time with more collaborative opportunities between interns and students," she said. Interns are "taking over chunks of teaching, working in small groups and planning curriculum. They're working really hard."

Paciulli hopes to expand the program in the future.

"I see them learning a lot," Kardane said of the interns. "I see them growing, which is exciting. I think for the first year, it's going very smooth."

Paciulli agreed. "It gives the interns so much more experience by the time they become teachers," he said, noting that schools today deal with far more complex issues than they did 20 years ago.

Not only are the services different, he said, but so are the assessments and ways in which growth is measured. Helping kids going through trauma is one example on the service side. "Some of these things aren't really taught nationally at the college level," said Paciulli, who has spoken in public meetings about the effects the opioid crisis is having on local schools.

Pointing to a teacher shortage in the Northeast, he expects interns from Antioch could be hired in the future. The "real-life" experience would give them a leg up as rookie teachers.

Sarah Gamble, who has interned in two kindergarten classrooms, is about to start helping with special education. She visited classrooms then developed her own plan for the year.

"Sarah really took the lead on it," said Maureen Parzych, kindergarten teacher. "She has a really amazing background in outdoor education. In my room, she's been spearheading the kindergarten forest program and pulled the curriculum we were learning indoors outdoors. It's been very helpful having her here, to share her expertise in that area and for both of us to learn."

"It's great to have another person around with 5-year-olds," Nam said. "I'm enjoying her enthusiasm and creativity — having someone new coming in, where we talk. It sort of brings me back to when I was in Antioch."

Special education teacher Whitney Lynde will be a cooperating teacher for the first time. She just reviewed Gamble's contract for this part of the internship.

"It was nice to just see what she was thinking about and also to see the things I knew she should have to walk out the door to be a special educator," Lynde said. "A lot of special education is case management and parent relationships, then following that child and developing their IEP [individualized education program] later in the year."

All three teachers interviewed by the Reformer praised Kardane, who meets with them once a month in a sort of support group setting. They discuss what is successful, what needs changing and overall classroom philosophy.

The interns are getting a lot of feedback, Nam said.

"The significant part of this concept is we got the supervisor here in the building five days a week to meet with the cooperating teachers, to meet with the interns, " Paciulli said. "We schedule meetings weekly. But on any given day, something could come up."

The children are said to be enjoying the presence of another adult. Kindergartners see Gamble as another teacher.

In the past, kids have been sad to see interns leave mid-school-year. The new program adds another layer of stability in the building. Lynde said her students "can only benefit from more love and support."

The only challenge cited by the kindergarten teachers is the need to "let go." That means allowing the intern to run the class.

"That's not always easy," Parzych said. "We know we're doing it for the good of everybody. To give up the opportunity to teach is not always the easiest thing."

At least two of the interns say they have not been scared out of the field yet.

Antioch's belief in public education and place-based education inspired her to intern at Academy School.

"The partnership seemed a great opportunity to get the maximum amount of teaching and hands-on experience," Gamble said. "Teaching is one of those things that you have to do to get better at."

Having the whole year to build relationships with the cooperating teachers and kids, Gamble said, is "really wonderful." She plans to return to Virginia, where her family lives, after finishing at Antioch in the fall.

Liz Greco's first teaching experience was in Connecticut, where she was living but commuting to classes at Antioch. She graduated in December and wanted to move to Vermont.

"I'm excited about working in the same building as Deb and to have her as a resource," said Greco, who finds Academy School to be much larger than her previous school. "We did some fun stuff in the fall and I'm excited to do some more project-based learning in the spring."

Greco, who is working in fifth grade classrooms, said she appreciates the way Academy School teachers work together in teams to support each other and the kids.

"It's definitely evident how hard the teachers are working to meet the needs of their students," she said.

Both Greco and Gamble will have their master's degree in elementary and special education. Lori Farina is another intern participating in the program.