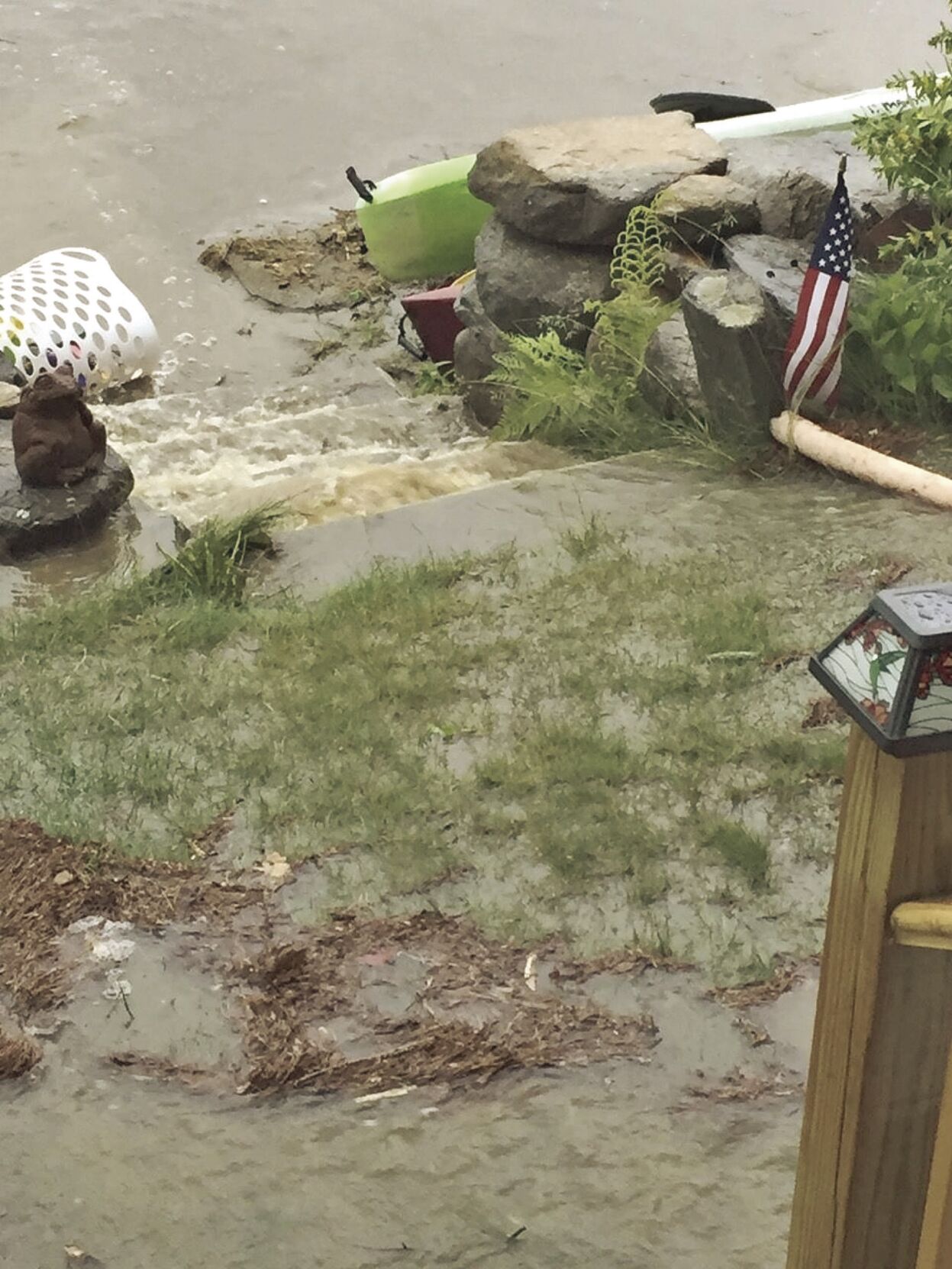 In this picture, runoff from above the lake erodes steps at Sue Campbell's place on Silverdale Road. 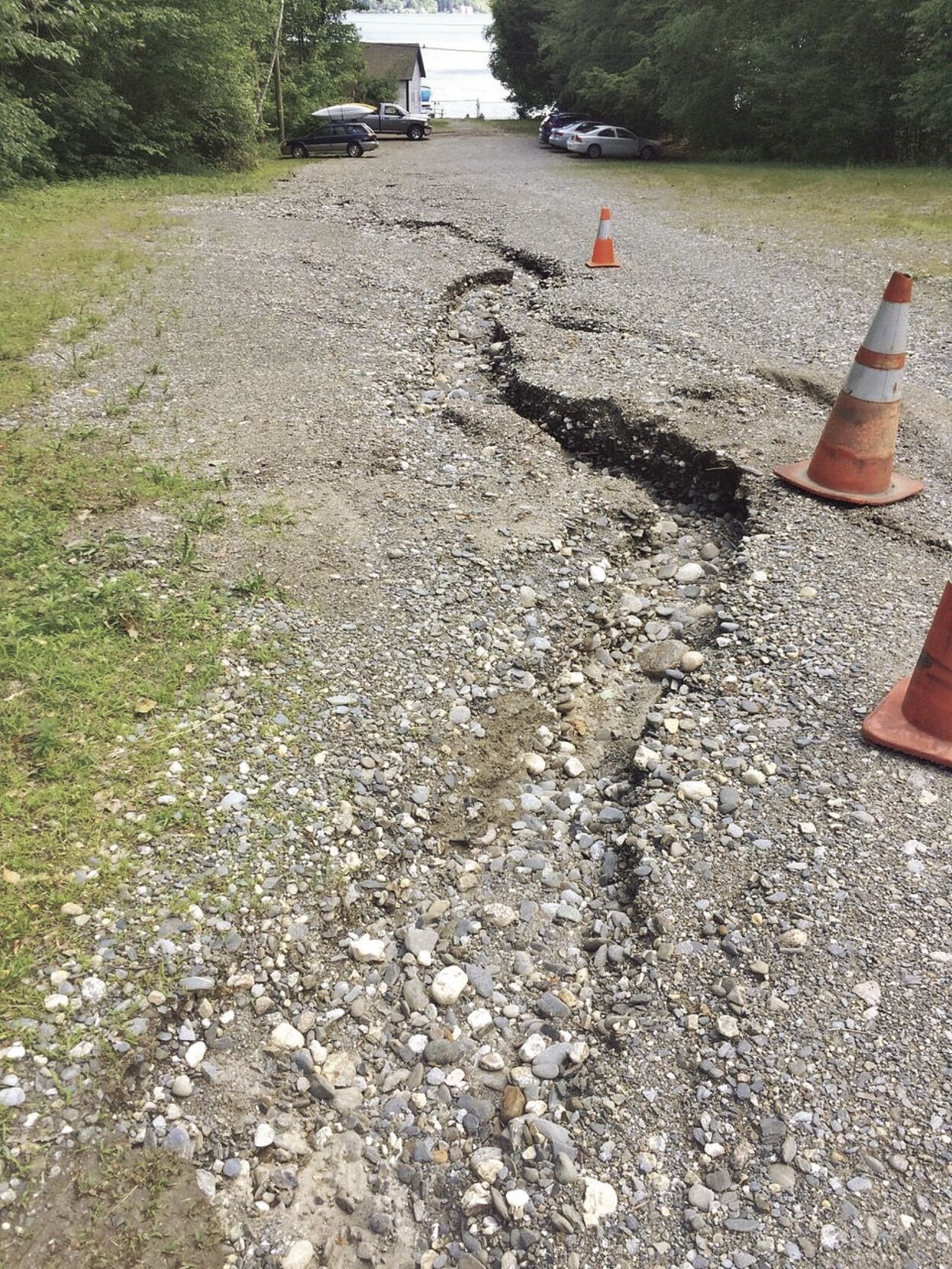 Damage to the entrance of North Shore Beach caused by runoff and erosion. 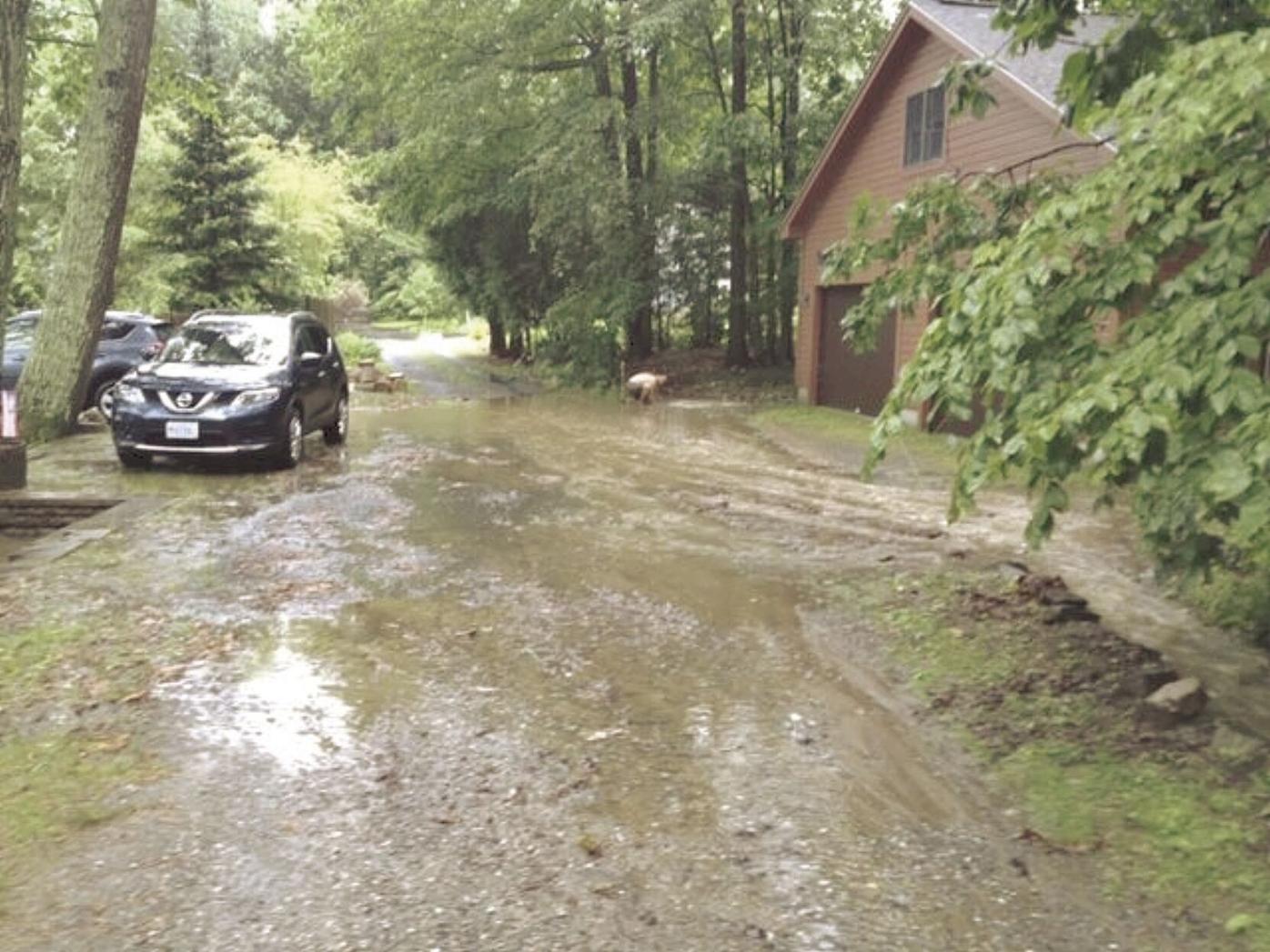 Runoff floods the front yard of a house on Linfield Lane in 2017.

In this picture, runoff from above the lake erodes steps at Sue Campbell's place on Silverdale Road.

Damage to the entrance of North Shore Beach caused by runoff and erosion.

Runoff floods the front yard of a house on Linfield Lane in 2017.

CHESTERFIELD, N.H. — Chesterfield voters will be asked on March 9 if they want to protect Spofford Lake with an ordinance that would prohibit development on slopes in the watershed that have a more than 15 percent grade.

If approved, the proposed Spofford Lake Watershed Steep Slope Overlay District won’t affect properties that have already been developed, but will limit what kind of work can be done in “precautionary slope” areas that have grades between 10 and 15 percent.

In the prohibited zones with slopes over 15 percent, most disturbances would be forbidden with special exemptions granted for driveways or expansion of an existing building, not to exceed 20 percent of the original footprint.

The town is hosting a virtual Town Meeting information session on Saturday at 10 a.m., continued to March 3 at 7 p.m., during which the proposal will be discussed.

Pam Walton, a former secretary and treasurer of the Spofford Lake Association and a property owner on the lake, said not adopting the proposal would mean the continued degradation of the lake.

“If this ordinance does not pass, bye-bye lake,” she said. “It won’t happen overnight, but it won’t be the same lake in 25 years. If it does pass, we have a shot at maintaining the lake quality as it is.”

John Koopman, a member of the Planning Board, told the Reformer to understand what a steep slope is, just look to Chesterfield Hill, the portion of Route 9 leading from town into Keene. On the Chesterfield side, the slope is a 7 percent grade and on the Keene side, it’s 9 percent.

The intent of the proposed overlay district is to prevent soil erosion, protect surface waters from sedimentation and storm water runoff as well as effluent from sewage disposal systems, protect downslope properties and preserve vegetative cover.

“Water cascading across lawns in Silverdale and Linfield Lane after rain storms and melting snow caused by runoff after development on Pinnacle Springs, sand filling in boathouses making them unusable, and many fewer trout/bass which require high oxygen saturation,” said Walton. “All changes caused because the lake is being used and misused by more people for more months, and it never gets a chance to rest and repair itself.”

At its Feb. 1 meeting, the Chesterfield Planning Board voted 6-1 to put the matter before voters.

James Corliss, the chairman of the Planning Board was the only no vote, saying he didn’t think it would pass the way it is written.

“I don’t see it as solving [the] runoff problems,” he said.

Bob Maibusch, owner of Pine Grove Springs Golf Course in Spofford, agreed, saying voters should demand the ordinance be refined before being authorized.

“This is highly restrictive,” he said during the Planning Board meeting.

Maibusch told the Reformer he had a professional engineer look at the proposal and it was his opinion the ordinance could result in further degradation of the lake by not allowing property owners to develop their properties in ways that would improve the lake.

“The state recommendation is that steep slope ordinances begin at 25 at 30 percent,” he said. “As proposed this ordinance will be the most restrictive in the state and will surely be challenged in court.”

Nonetheless, said Maibusch, most property owners on and around the lake want it protected but they don’t want to give up all their property rights to do so.

“Nobody in their right mind wants to do anything detrimental to the lake because it will devalue their property,” he said.

Charlie Donahue, who owns property on the lake, characterized the proposal as “slippery slope over-regulation” that is “harsh, unreasonable and over the top.”

“I’m all for protecting the lake, but there will be a lot of people who are not going to be able to touch any of their land without an expensive engineering study,” he said.

Donahue also believes the ordinance is just the first step to limiting development all over Chesterfield.

“No one in Chesterfield will be able to pick a dandelion without a permit and an engineering study,” he said. “The whole point is to shut down any and all development in town.”

Like Maibusch, Donahue wants voters to say no and send the ordinance back for revisions to make it less restrictive.

“They need to return to the drawing board,” he said.

Walton said the ordinance has been in the works for the past two years and the town has held public sessions to discuss the need for the proposal.

And Koopman said similar ordinances have been in place in other towns going on 20 years.

“It’s not outlandish or unique,” he said.

According to the state’s Municipal Land Use Regulations Database, 112 towns or cities in the state have some sort of steep slope or ridgeline protection regulations.

“This ordinance is not a ‘take’ as has been alleged by some, because they don’t deprive the property owner of all economically beneficial use of the property,” said Walton. “The courts are required to balance individual private property interests against the broader public interest, like water quality. This ordinance is about protecting the lake and its watershed. It’s not about the rest of the town. This is an overlay focusing on the lake because the lake is in trouble.”

“The consequences have become more and more severe as time goes by,” said Koopman. “Logic would seem to dictate, the more you have development, the less of an opportunity you have for runoff to be absorbed by woodlands and undeveloped areas.”

Donahue said a less restrictive ordinance, one that defines prohibited slopes as more than 25 percent, would be more acceptable to him and others on the lake.

“Steep slopes need to be steep,” he said.

The town also needs to address culverts that drain into the lake, carrying sedimentation and contamination from roads, he said.

Maibusch also said it’s “patently unfair” that people who don’t live in the watershed will get to vote on the ordinance. To that end, he submitted a petition to the town that calls for a two-thirds vote to approve the proposal, rather than just a majority vote.

By his calculation, Maibusch got signatures from property owners representing 58 percent of the land in the watershed.

The petition will be reviewed by the Board of Selectmen, said Town Clerk Barbara Girs.

“When it’s turned in, the Selectmen’s office will check to make sure all signatories fall within the watershed area and that their properties represent 20 percent,” she said.

“I’ve been in the golf business my whole life,” he said. “The last thing I want to see is another golf course going away.”

Since 1960, said Walton, she’s seen the lake change, and not for the better. Changes include invasive weeds, erosion of shoreline, and sediment covering pebbles and rocks along the shore.

“Too many people are forgetting our Master Plan and are putting their own interests before the needs of the lake and are oblivious to negative changes because the lake still is so beautiful,” she said. “The eutrophication of Spofford Lake will accelerate as the large parcels are developed, and Spofford Lake will slowly become less desirable, especially if milfoil and other invasives imbed themselves, which translates into fewer tax dollars.”

The town is also developing new septic regulations to protect the lake. Recently, an unusual bloom of cyanobacteria was seen on the lake, and the water level was low last summer due to a lack of rainfall.