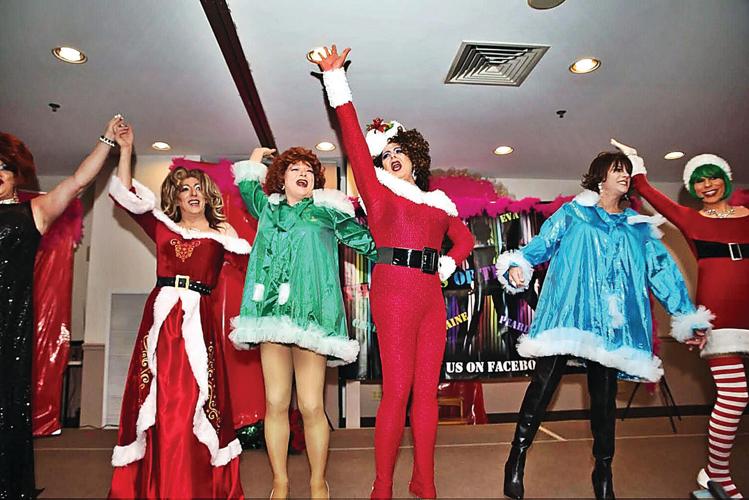 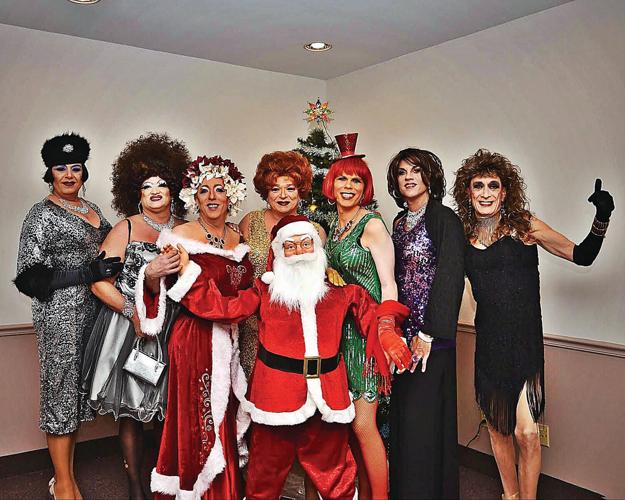 BRATTLEBORO — Years ago, Patrick Brown used to go to the Rainbow Cattle Co. in Dummerston.

It was the perfect place, he said, for young gay people to meet. But it was also the home of the Ladies of the Rainbow, a drag show troupe that served as the bar's primary entertainment. When the establishment closed, the troupe continued hosting performances all over the region.

Three years ago, Brown brought an idea forward to the AIDS Project of Southern Vermont: why not host a drag show fundraiser? And the Ladies were the logical entertainment choice. They'll be performing their annual holiday benefit show Saturday at the Veterans of Foreign Wars post at 40 Black Mountain Road in Brattleboro.

"They rarely do anything but charity causes," Brown said.

A drag show, he knew, too, would draw a large crowd. The Ladies are accustomed to selling out their shows. It's the idea of having an alter ego, the raunchy humor, Brown thinks, and the fact that "every drag queen is unique."

Brown's spouse, Paul Mekdeci, is one of the newest members of the Ladies. He plays Ginger Soulless and joined the Ladies three years ago.

"For me, it's always been about my love of acting," Mekdeci said.

He performed in drag for the first time when he was 18, after an actress dropped out of a play he was in.

"I was like, 'I'll do it,'" Mekdeci said. He dressed up in drag and performed a female role. When he started getting involved with the AIDS Project, he participated in the AIDS Walk for Life. One year, he figured he could raise more money by dressing up in drag, so he did.

And eventually, he found the Ladies.

"The thing I like the most about it is the fashion," he said. His alter ego, Soulless, is "bubbly, outgoing, the life of the party," he said. She can be seen in shiny green flapper gowns, or a sexy Mrs. Claus outfit.

Mekdeci came up with the name Ginger Soulless because he himself is a ginger (a redhead), and people are constantly joking that gingers have no souls.

Soulless is inspired by four different people, Mekdeci said. Two are fictional characters — Carrie Bradshaw, from "Sex and the City," and Rose Nylund, from "The Golden Girls, and two are real-life comedians — Carol Burnett and Joan Rivers.

Soulless has some of Mekdeci's real-life characteristics but, he said, "I was always an introvert growing up."

Learning how to perform and dazzle in front of a crowd of hundreds of people helped Mekdeci break out of his shell. He's performed in other theater troupes where the fit wasn't really right, but with the Ladies, he said he fits right in.

"Everybody's so great," he said.

What appeals to him most about the Ladies is the many charity shows they put on.

"They have really big hearts," he said.

Karen Peterson, executive director of the AIDS Project of Southern Vermont, said the show is a hit every year. It attracts a diverse group of people.

She thinks people enjoy it because it's funny. Mekdeci said it's basically a comedy show with musical numbers in between.

Seeing men dress up is also a big attraction. "They look better than I do," Peterson said.

All proceeds from the show go to the AIDS Project of Southern Vermont, which helps support local people living with HIV/AIDS and works to reduce the risk of transmission to others in Windham, Bennington and southern Windsor counties.

The show is not suitable for children. Doors open at 7 p.m. and the show starts at 8 p.m. Tickets are $20 per person and $150 for tables of eight. To reserve tickets call 802-254-4444, or purchase them online at www.aidsprojectsouthernvermont.org.