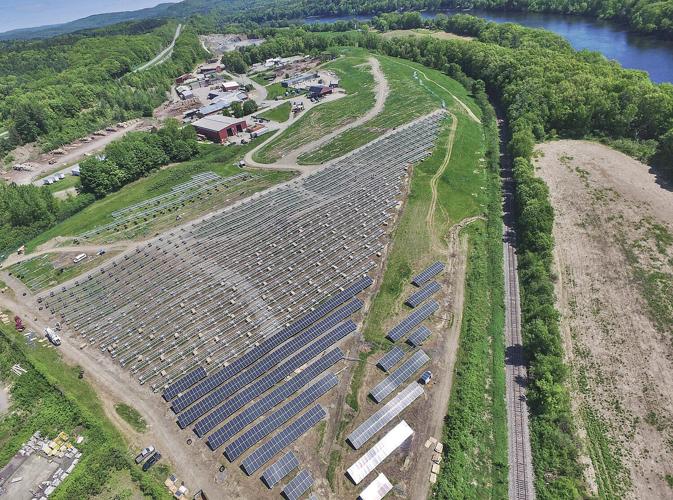 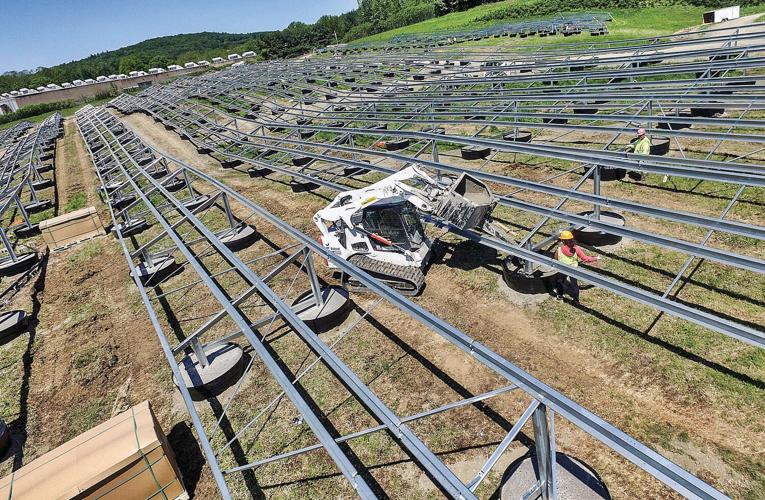 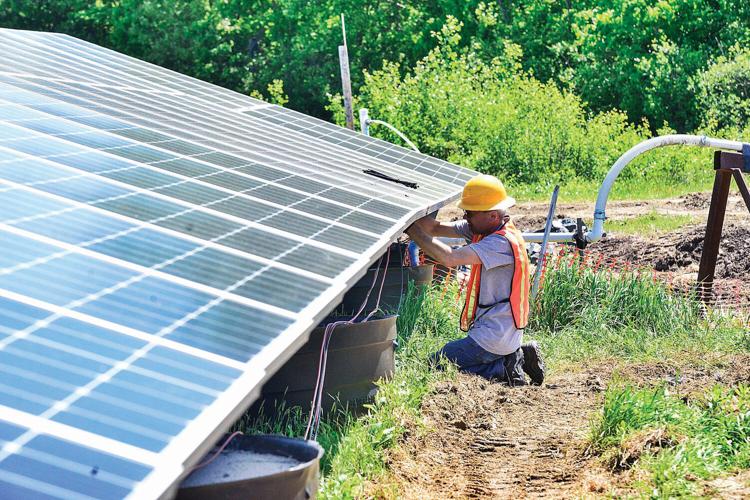 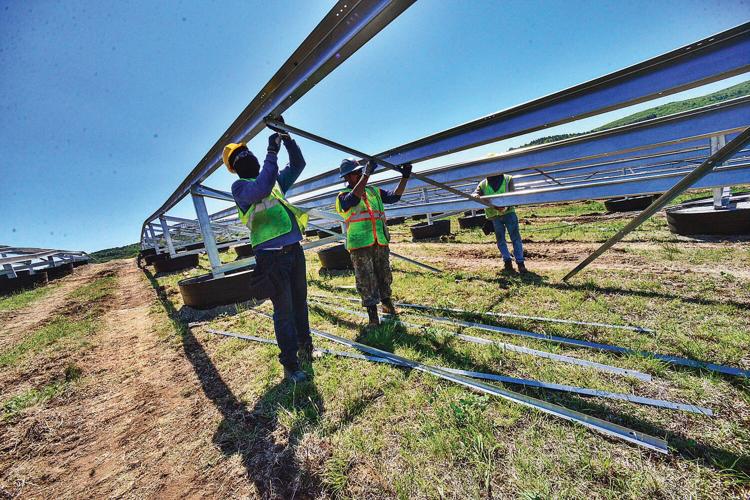 BRATTLEBORO — A large scale solar project on the capped landfill on Fairground Road is on track to start generating power by June 30, a requirement of the certificate of public good for the project issued by the Vermont Public Utility Commission.

The approximately 5-megawatt array is going up on the district's landfill being leased by China-based Sky Solar Holdings. Special legislation allowed for a project of its size to be built on a landfill in Windham County.

During a tour on Thursday, Spencer said the landfill array will be 10 times as big as the largest net-metering projects that can be approved in Vermont. He sees landfill solar projects as a trend throughout the United States and believes Massachusetts has 20 or more of them.

To keep the ballasts that will hold the solar panels secure, concrete is being poured out of Bobcat vehicles into black tubs. Due to caps on the landfill — a 2-foot clay layer on the north side and "a kind of textile fabric" on the south side — posts cannot be driven into the ground for this project, said Spencer.

The racking system to hold the panels is from Game Change, of New York, and can be adjusted to ensure the panels are in the optimal position for getting sunlight.

"This is their specialty," said Spencer.

Integrated Solar, based in Brattleboro, is taking care of electrical work. Its employees are among the approximately 40 workers at the site each day.

More than $10,000 of compost from the district went into filter socks and berms for sediment and erosion control. Evans Construction, based in Dummerston, built the berms and and roads for the project in the winter.

Rich Earth Institute, located next to WSWMD on Old Ferry Road, is collecting urine and solid human waste in receptacles used by workers at the site. The organization turns the material into fertilizer for farms.

Sky Solar has subcontracted with Gransolar, or GRS of Spain, for engineering, procurement and construction. GRS noted some minor issues during construction in a weekly progress report issued Tuesday.

"The long rows below the permanent road where we are working on make the concrete pouring and modules delivery a time-consuming task due to their length," the report says. "The foundations and structure characteristics and the uneven ground required a period of adaptation that slowed down the first part of the mechanical installation. Now, the mechanical installation goes much faster."

Rain "may cause recurrent delay," the report says. "Due to the particular nature of the ground, we need to be very cautious when it's wet and soft."

Spencer said tariffs approved by President Donald Trump could have been "a deal killer" had equipment not been purchased earlier. The panels come from China.

Sky Solar bought the lease for a landfill methane gas system at the site from NEO LLC and has plans to integrate the system with an anaerobic digester for food scraps to maximize use of a 350-kilowatt generator. Spencer said the project was deemed financially feasible after a study. The WSWMD Board of Supervisors will receive an update about it on June 14.