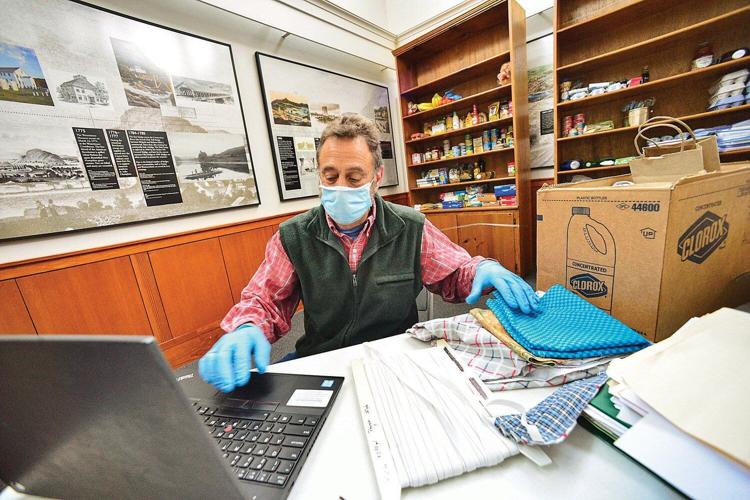 Rockingham's Development Director Gary Fox enters data on the availability of mask-making materials into an inventory spreadsheet as part of Rockingham Help and Helpers on Friday. 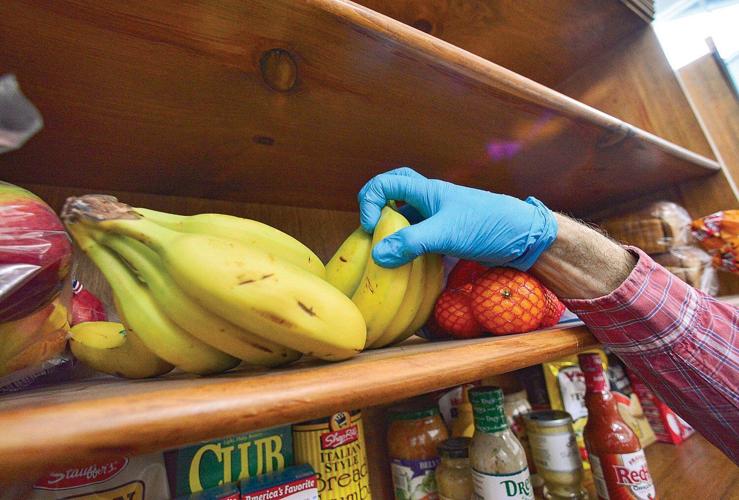 Rockingham's Development Director Gary Fox enters data on the availability of mask-making materials into an inventory spreadsheet as part of Rockingham Help and Helpers on Friday.

BELLOWS FALLS — A group of concerned citizens and organizations has formed Rockingham Help and Helpers to meet the human need since the coronavirus hit the region.

Although the name specifies Rockingham, the volunteers are helping people in Westminster, Grafton and Athens as well.

And as the name says, it's made up not just of people who need help, but those that can deliver that help, said Laura Schairbaum, executive director of the Greater Falls Connection, one of the non-profit groups that is heavily involved.

Schairbaum said last Wednesday that the group was formed a little over a week earlier with 120 volunteers and 30 requests for help, particularly from people who because of health issues should not leave their homes.

Help can take the form of deliveries of food, a lift to an important appointment, or even help walking a dog, said Leslie Goldman of Rockingham, one of the volunteers.

"A lot of people need help with food right now," said Schairbaum, who said that many people are either homebound or in self-quarantine, and need food dropped off.

Schairbaum and Goldman said it's important for people to fill out the questionaire - https://rockinghamlibrary.org/rockingham-help/ on the Rockingham Free Public Library's website - to both volunteer and request help.

Goldman said Rockingham is one of many towns throughout Vermont that is working to make sure the most vulnerable get help.

"All the other towns are coming together to help people who are vulnerable and need food," Goldman said.

In addition to the town of Rockingham, the Greater Falls Connection, Parks Place, Our Place, the Bellows Falls Rotary Club and the Sustainable Rockingham Group (formed this past winter as part of the Take Action Rockingham group) are involved with the Rockingham Help and Helpers effort. For example, Our Place, the local daytime shelter and food shelf, is helping get food out to those in need.

"They reached out to the town and other groups that were part of the process and said, 'Hey, we think is is important for the community to stay connected,'" Schairbaum said.

She said Gary Fox, the Rockingham development director, is working to establish a drop-off depot and pick-up area at The Waypoint Center on The Island, in downtown Bellows Falls. She said food donations, as well as personal hygiene items such as diapers and shampoo, are needed. A list of the food items that are needed is also listed on the library's webpage, she said.

The Waypoint Center has definite hours for drop off and pick up. Fox said the Help and Helpers group takes donations at the Waypoint Center from 9 am to 10 am Monday through Friday, and from 5 p.m. to 6 p.m. on Wednesdays.

"We put orders together for delivery mid-day. Now that we have a plan and some activity - we've gotten a fair amount of donations and had deliveries to six families today," Fox said last Wednesday.

He said that Deb Witkus of the Greater Falls Connection has done a great job of collaborating with Our Place through director Lisa Pitcher. "We are each increasing the efficacy of each other's work," he said.

Fox said some of the town theater staff will be working at the Waypoint and helping make the Rockingham Help and Helpers' operation work, by accepting donations, recording and stocking inventory, putting orders together.

He said perishables such as milk, butter and cheese are stored at the Sustainable Valley Group'swalk-in cooler at the local food hub, a short distance from the Waypoint Center.

"The safety aspect is crucial. Workers at the Waypoint wear gloves and masks. Donations are left outside and the worker brings them into the Waypoint. Orders for delivery are put outside by the workers and labeled, and volunteer drivers pick them up and take them to the recipients, all coordinated by the crew of Lyn Haas, Diana Jones and Julie Cermola from Parks Place.

"There is no contact closer than 6 feet between the donors or the volunteers and the workers," Fox said.

Schairbaum and others urged residents to visit the Rockingham Free Public Library's website to learn more about the program and what is needed and available.