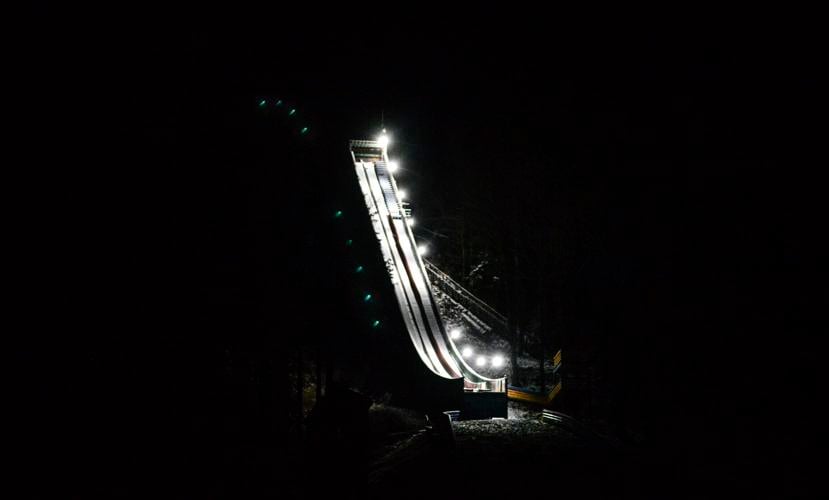 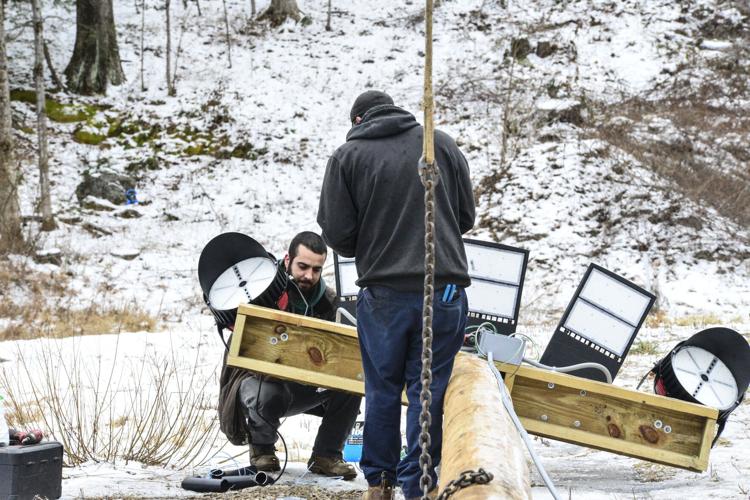 Electricians from Dompier Electric Inc. install lights on a pole that will be used to light the landing of the  Harris Hill Ski Jump. 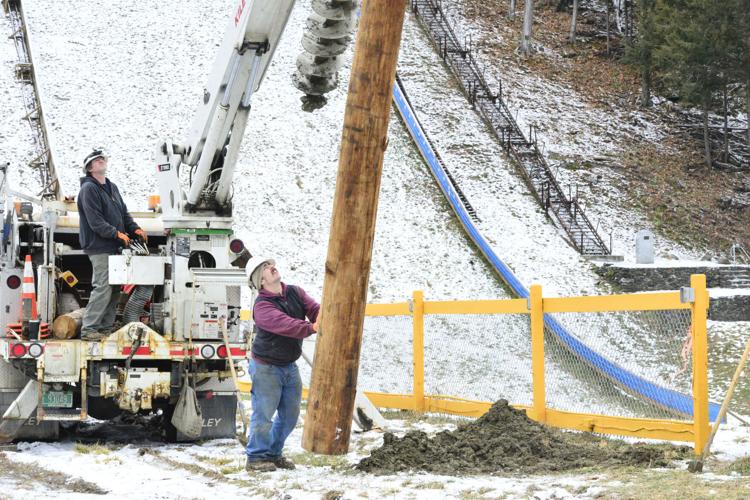 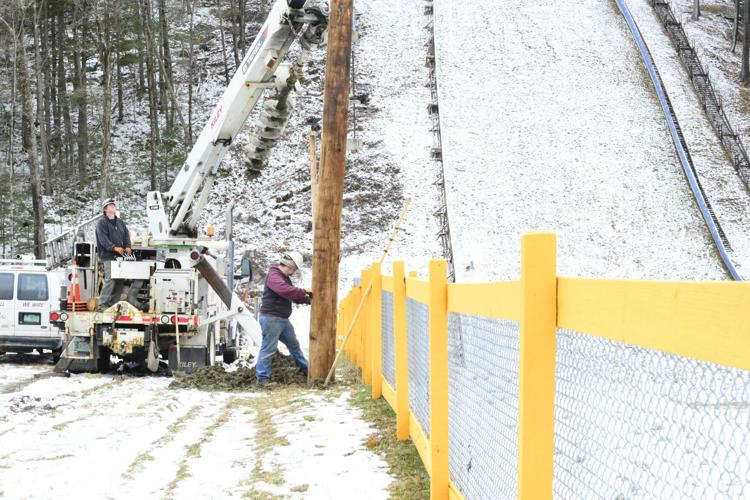 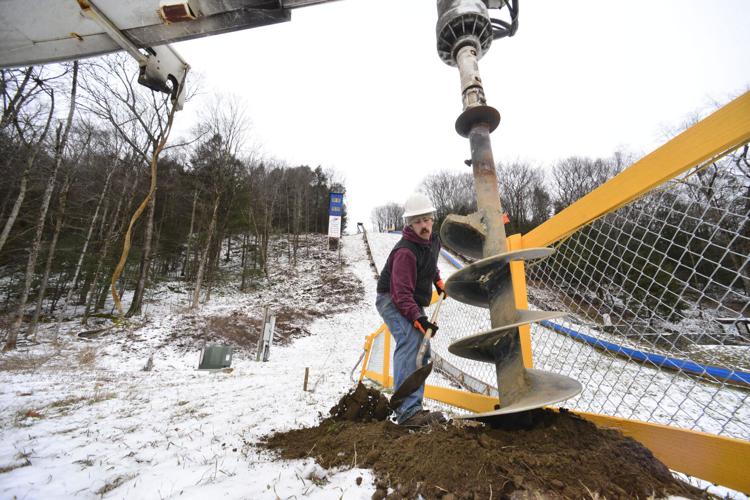 Workers from Consolidated Communications install light poles on the landing for the Harris Hill Ski Jump in December. 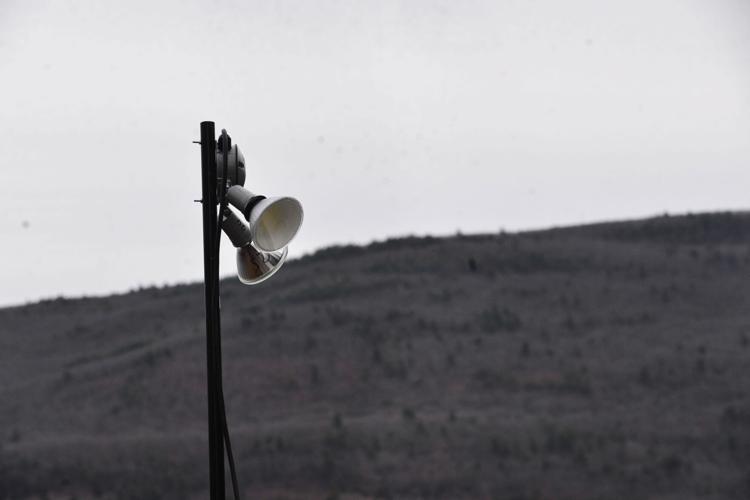 Electricians from Dompier Electric Inc. install lights on a pole that will be used to light the landing of the  Harris Hill Ski Jump.

Workers from Consolidated Communications install light poles on the landing for the Harris Hill Ski Jump in December.

“It’s something we’ve been thinking about for several years, but really there was no reason to do it,” said Sally Seymour, his wife, who serves on the nonprofit’s board of directors and a committee of about 16 members who help with the annual event.

This month, the Harris Hill Ski Jump is celebrating 100 years of hosting national events, international tournaments and US Olympic trials.

Allan, who serves on the committee, believes his vision all came together when organizers were able to put together an event for this Friday night, a kickoff for the Harris Hill Ski Jump competition. The group also has become aware in recent years of the difficulty of hosting the event in the afternoon, when temperatures warm up and the landing hill becomes much firmer to land on.

For the future, Allan anticipates more evening jumping will occur. He said “it was just time” to add lighting.

His specialty is anything involving wires.

“We’ve got an extensive radio communications thing going and now the lights,” he said.

With the centennial event occurring this year, the group started making plans about 15 months ago.

When organizers first sat down, they wanted to come up with something to thank the community for all of its support over the last 100 years. One idea included holding a parade on the Friday night of the jump weekend and another was a reception at a downtown establishment.

The other was to hold an event at the ski jump with music and refreshments.

When Sally came home from the meeting and told Allan it appeared his dream would be coming true, he got to work. A firm from San Diego was hired to conduct a study of the area and create a plan for adequate lighting.

Allan said with software today, he can send dimensions and specific details to the firm, and it would get back to him about what layout would be needed, as well as what kind of lighting.

Spending some time in his studio, Allan built 15 light poles with three lights in each one. If not for LED lights, he said, there would have been “a horrific wiring problem because of the amount of electricity it would have taken.”

“All the lights that are on top of the hill are only 6 or 7 amps,” he said. “We would need 10 times that if we had conventional lights.”

A tricky part of the project had to do with figuring out how to light the landing hill. Allan worked closely with Todd Einig, director of competitions, on determining the brightness of the lights and ensuring there were no dark or bright spots that would affect jumpers.

Allan said Einig has been “very helpful. I basically lit it to ... what he wanted,” Allan said. “I would call him the boss.”

“That was huge,” Allan said. “We couldn’t have done it without them. That was key.”

Dompier Electric of Brattleboro was hired for the project.

“When you ask for help with Harris Hill, you always get a good response,” Sally said. “They were very accommodating and responsive. When we needed them, they came.”

Assistance also came in the form of rebates from Efficiency Vermont and financial contributions from the Brattleboro Elks Lodge. Allan and Sally declined to provide the total price of the project.

“I would say it wasn’t cheap but then again, it’s going to last, and it will get a lot of use,” Allan said. “It certainly keeps Brattleboro on the map as far as jumping is concerned, because every other serious jump in the country is all lit up.”

Allan said Retreat Farm is interested in using the lights when Harris Hill won’t need them.

“I think they’ll find a use for them this summer,” he said.

The organization owns the property where the landing hill sits. Harris Hill Ski Jump Inc. has a 99-year lease to use the site for five months a year.

Allan has received positive feedback so far. He bumps into people who are hiking the Retreat Trails by the jump and has noticed a lot of cars with out-of-state plates checking out the lights. He noted the lighting was created with an eye toward preventing too much light pollution.

Friday night lightsFor the Friday night celebration, Harris Hill Ski Jump Inc. will partner with the Brattleboro Outing Club, which was started by Fred Harris in 1922 with the understanding that he needed an organization to run events. Sally said the club ran the tournaments for about 80 to 85 years.

“We wanted to celebrate our anniversaries together, and we decided the Friday night celebration would be the appropriate time to do it,” she said.

Friday’s event will run from 6 to 8 p.m. and be free as a way to give back to the community. It will include fireworks, music and a “fun jumping tournament” in which jumpers will look to hit a target made with dye. The jumper who comes the closest or lands on the mark wins the competition and some prize money.

BRATTLEBORO — A lot of things have changed over the past 100 years, but many things have remained the same, and that includes the mission and …