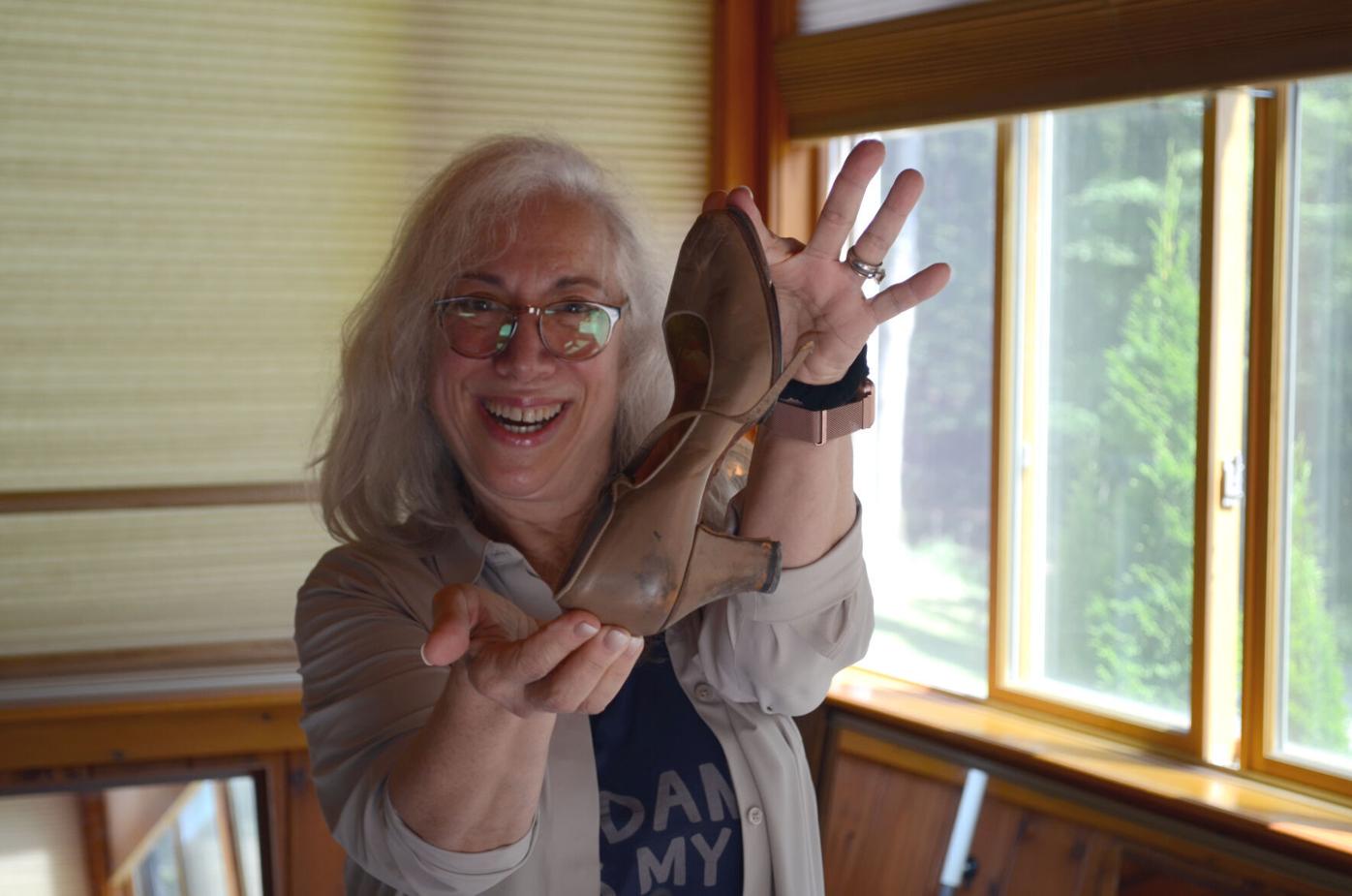 State Rep. Linda Joy Sullivan of Dorset shows off one of her tap shoes. 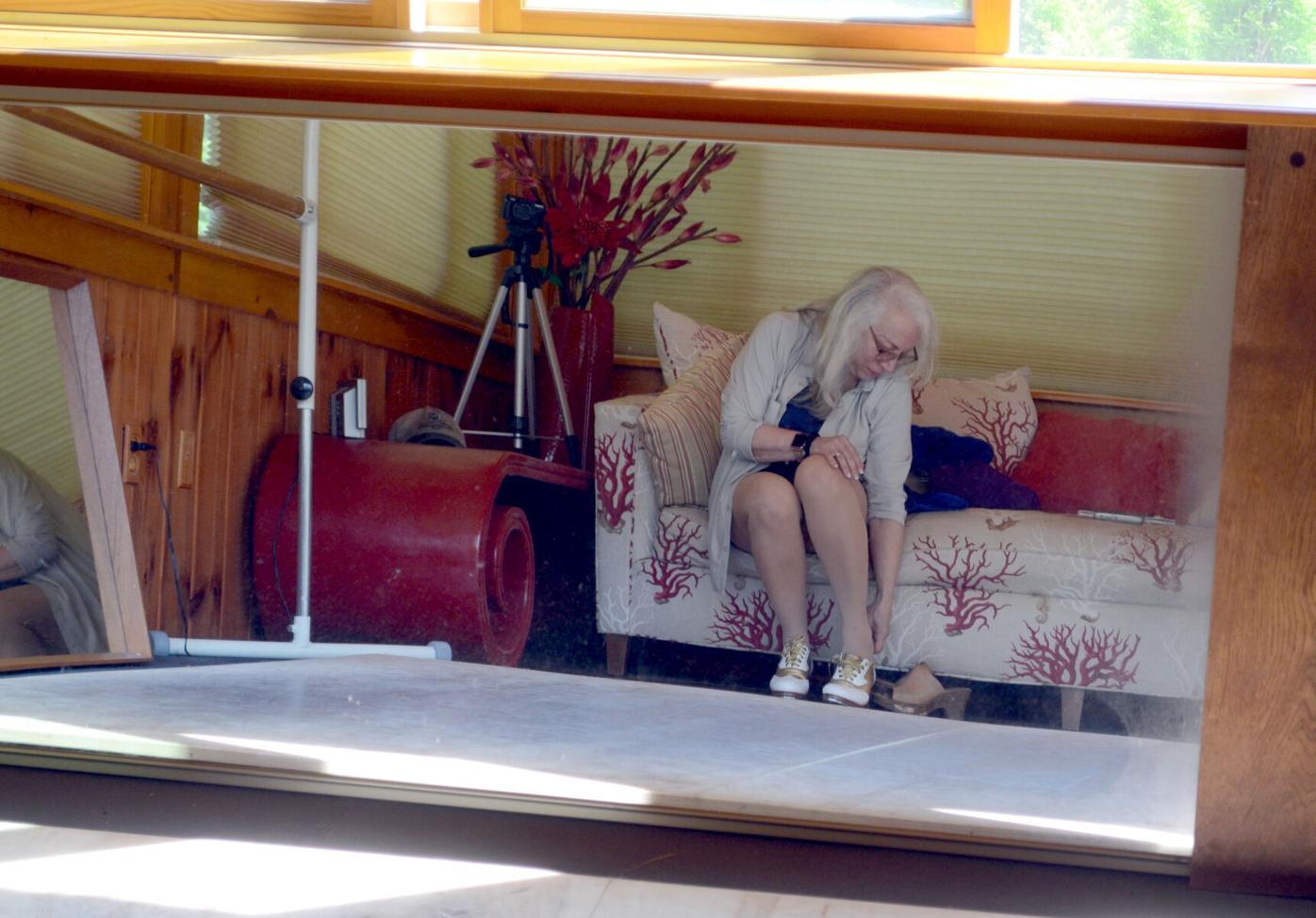 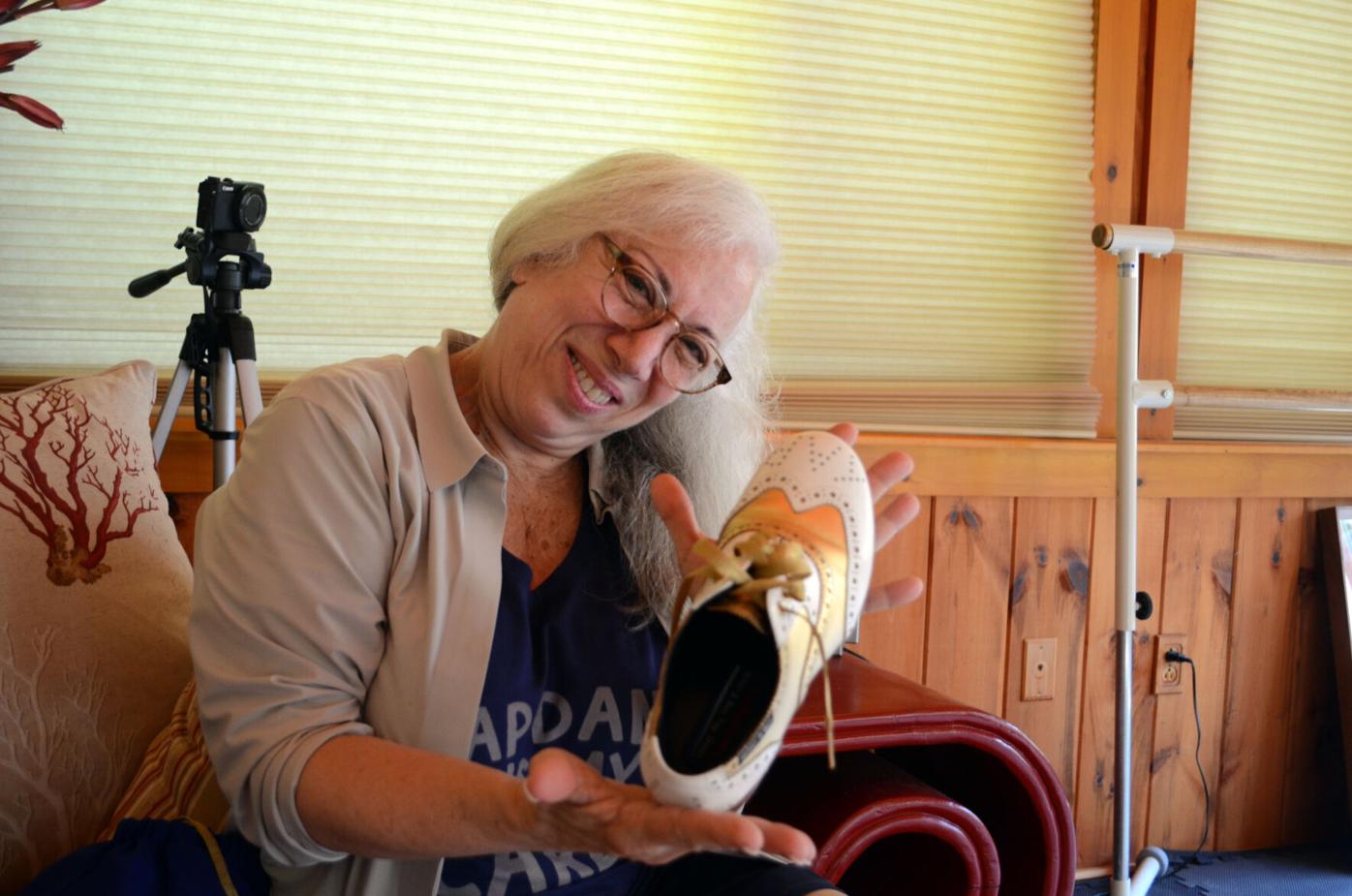 State Rep. Linda Joy Sullivan of Dorset shows off one of her tap shoes.

DORSET — It doesn’t take any coaxing at all to get Linda Joy Sullivan to lace up her white-and-gold Miller & Ben tap shoes and demonstrate a few steps on her studio’s 12-by-8-foot birch dance floor. In return, she has one request: her visitor must learn some tap, too, sneakers and all.

“My one word in the studio is ‘can’t’ means ‘won’t.’ You can do it,” she says, overflowing with positivity on a recent sunny morning in her studio, Linda Joy’s Tap Joint. “It might not be the way I do it, but the step will be right. And the way you throw it out there is yours.”

“Forward, back, put your foot down,” Sullivan says, instructing her absolutely green student to make three distinct sounds with the right foot — two with the toe, and one with the whole foot. Then it’s the same step, but with the left foot. Then come a few more steps, until there’s a complete phrase in tap.

“You did a shuffle and then stepped on it, then the other foot, then took the right foot and did shuffle-step-step, shuffle-step,” she rattles off after the brief lesson. “You just did the first phrase of the national anthem of tap, called the Shim Sham.” And now, as dance teachers have done since the beginning of time, she tells her student: go home and practice.

To the residents of Dorset, Peru, Landgrove, Danby and Mount Tabor, Sullivan is their elected representative in the Vermont House, a Democrat whose achievements include introducing legislation to combat human trafficking. To her business clients, she is a certified public accountant, holder of an MBA and partner in MaughamSullivan LLC.

But tap dancers across the country and around the world know another Linda Joy Sullivan. This one is a dancer, choreographer and dance teacher, one whose 49-year career has brought her into the orbits of such legends as Gregory Hinds, Ben Vereen, Gene Kelly and Chita Rivera. In her freestanding studio on a hill above her Dorset home, she provides private and semi-private lessons for students of all ages and abilities, keeping tap’s traditions alive.

Today, drawing neophytes into the circle of tap is Sullivan’s mission.

“I think whatever we have, we should find a way to give it back somehow,” she says. “My focus right now is that pretty much all of the legends are deceased. There are very few of them left. And then you have my generation, who trained directly with them. And I think it’s our obligation to find the younger bodies to give this information, to teach them the legends’ methodology, so we can keep going.”

Giving back may be a family trait. Her late brother, Frank Lupo, the TV writer-producer who collaborated with Stephen J. Cannell in the 1980s on such dramas as “The A-Team,” “Hunter” and “Wiseguy,” took the same approach. “You always help somebody, so he would always help other writers,” she says. “I’m always going to help other dancers. Always.”

Sullivan was a girl growing up in Manhattan when she was introduced to tap. Her parents wanted their kids to take lessons, and little Linda Joy’s choice was not tap, but ballet.

“My mom actually sent me to ballet,” she adds, “because I was just too much of a tomboy, and too much of a somebody who didn’t pay attention in the street, like I would fall all over the place.” The ballet lessons, she recalls with a laugh, did not in fact make her more graceful in everyday life.

As dance teachers will do, Sullivan’s ballet teacher one day suggested that she also study tap, to expand her knowledge and abilities. “She said, ‘you need to go to Mr. Henry LeTang. He’s a legend. He’s the one who taught Gregory Hines and Sammy Davis Jr. You know, everyone you can think of studied at least once with Henry.’ People doing tap on Broadway would call him in not only as a choreographer, but maybe to fix the choreography or accent it properly. So he was a legend, and he was very sweet man, very sweet.”

Sullivan could not possibly have known it when she climbed the long, long staircase to LeTang’s studio off Broadway one evening, but her life in dance was about to move in an entirely new direction.

LeTang’s receptionist, Ellie, who was also his wife, asked Sullivan how much tap dance experience she had; she honestly answered, none.

“And this gentleman came over, took my hand, took me into another room, showed me a couple of moves and said, ‘Do this, do this, do this, do this.’ And he took me back out, and he said, ‘I could do something with her.’ From that day on I was there every single day.” Sullivan’s ballet training had prepared her well.

Sullivan worked with LeTang for years, in New York, in Florida, and in Las Vegas. They put together a troupe called the Rat-a-Tat-Tappers that toured nationally; she was his dance captain for an RSO record tour; she was his co-choreographer for a dance tour organized by legendary New York disc jockey Murray the K; they worked with the dancers for the Broadway musical “The Wiz.”

“I performed for him, you know, and I taught for him. I taught for him since the ’70s all the way through to the 2000s, and I have all of his routines,” Sullivan said. “The two of us taught through routines, progressive routines so people could learn as they moved. Sometimes you’d learn to travel across the floor, or learn how to use your heels, and each routine was a progression, to get people ready to go out and audition and get the job.”

LeTang, who held a Living Treasure in American Dance Award, worked up until the time of his death in April 2007, at the age of 91.

About those progressions: They’re the classic way of performing tap, and Sullivan is all about preserving tap’s traditions and respecting its history. Essentially, a number of dancers would appear on the stage; one would perform a phrase, and the next dancer would repeat that phrase, with a little something added. It would go that way from dancer to dancer, each one yielding center stage to the next.

Suggest that this sounds like musical solos, and Sullivan exclaims, “That’ exactly what it is! …. The fun that we had was, you did your routine that people wanted to see, your show, but everyone got to jump out there and do that little challenge, and then you backed into the whole line.”

This dance-and-response is what Sullivan’s students get the opportunity to do, in her Friday afternoon improv jams. “It’s not a dance class. I’ll throw out a step, you take it from there. You take it from there, pass the floor. And that’s how they learn.”

This traditional approach, she fears, may be dying out in America’s dance studios. “What I’m concerned about is that now a lot of dance studios are focused on pageants and competitions … and it’s becoming more acrobatic than technique.

“They’re excellent dancers, don’t get me wrong, but it’s an entirely different territory.” Memorized, acrobatic routines may win trophies, she said, but they won’t land jobs at auditions. That takes an ability to interpret and create.

Sullivan relocated to Florida in the 1980s, and she and her husband moved to Vermont from Florida around 2013, agreeing that they missed living in the North.

While most of Sullivan’s students are professionals, “being here in Vermont is awesome, because I’m having so much fun. I’m actually getting people who’ve never had tap shoes on, people who’ve had tap shoes on, and they’re having a blast, and that’s the key for me is for them to have a blast.” There seems to be no age limit; some of her beginners are in their 60s, while some of her students are almost 80.

She also believes the time is right for a new generation of Rat-a-Tat-Tappers, and will be holding auditions for a professional tour.

“I think COVID actually brought back the popularity of tap. Because, what kind of dance, can you train yourself on, grab a little board, roam on YouTube and practice some steps, and it’s phenomenal exercise. And so now, a lot of the dancers are doing phenomenal combinations, but they’re confined to their little boards. But that’s okay. Now they just need to expand.”

Who are some up-and-coming dancers to watch? “Well Savion Glover, of course,” she says. “There’s a young dance teacher in Florida who also studied with Henry – her name is Debbi Dee, and she’s amazing. There’s Chris Racine, who is my student, and was Henry’s student. And then there is Shea Sullivan, who studied with Henry. I got to help Henry teach Shea and a partner some tricks.”

“I am still searching for that one protégé,” she adds. “I have my Chrises, you know, and Chris is a great age, but now you want the next generation.”

What should someone do if they think they might like to jump into tap? “They should call me,” Sullivan says. The number for the Tap Joint is 802-558-1457, and the email address is linda.joy.tap@gmail.com. Just be prepared to learn the Shim Sham.

To her constituents, Linda Joy Sullivan is a state representative. To tap dancers around the world, she’s an accomplished dancer, teacher and choreographer.