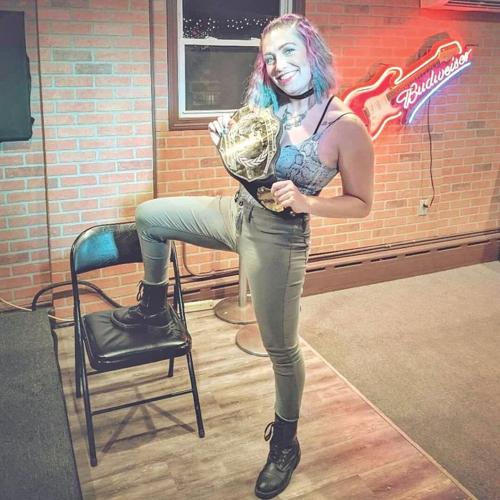 Adrianne Vivenzio won $100, a belt and a slot at an upcoming comedy show at the Academy of Music Theatre in Northampton, Mass.

Adrianne Vivenzio won $100, a belt and a slot at an upcoming comedy show at the Academy of Music Theatre in Northampton, Mass.

WEST DOVER — Adrianne Vivenzio has become more than just a contender in the regional comedy world.

Her punchlines recently earned her a championship title belt in a stand-up comedy competition in Northampton, Mass. She started writing her latest jokes after a skateboarding injury.

"I broke my ankle and I was really bored," the local bartender said Sunday during an interview at the Coffee Barn in West Dover.

While nursing her injury, sitting on the couch and scrolling through Facebook, Vivenzio was reminded of a time she tried stand-up comedy three times about six years ago. She decided to write some new jokes, most of which involved her being in a cast, and went to a comedy open mic at Bishop's Lounge in Northampton a day before her cast was to come off. She didn't realize she would be in a contest that night in late June.

Vivenzio said she won the competition, which featured about 17 other performers. She then went up against three other people in the Aug. 23 finals and won $100. She plans to keep her award, the championship belt which looks like something out of World Wrestling Entertainment, and the cast she wore, on her mantle.

As the winner, Vivenzio also will open up for comedian Jessica Kirson on Saturday at the annual Comedy Caus3 at the Academy of Music Theatre in Northampton. The show starts at 8 p.m. and raises money for Northampton homeless shelters.

Kim Deshields will host and The Alchemystics will perform music. HBO, NBC and Comedy Central are sponsoring the event but Vivenzio is not sure whether it will be shown on television. She said the venue has 800 seats.

According to the biography on her website, Kirson played herself in the HBO series "Crashing."

She acted in and served as a consultant, producer and writer for the Robert De Niro film "The Comedian." And she has appeared on "The Tonight Show with Jimmy Fallon," "The View," and "The Howard Stern Show."

Vivenzio expects to hit the stage before Timothy Lovett. He runs the entertainment company, Comedy as a Weapon, putting on the show and would riff off the performers' sets in the contests she won.

Vivenzio will be recycling some of her previous material. That "will take some of the pressure off," she said, adding that she still plans to write some new stuff.

Vivenzio graduated from Hinsdale, N.H., High School in 2009. She has been living in the Deerfield Valley for six years and works at the Valley View Saloon in West Dover.

Vivenzio keeps ideas in a folder of notes on her cell phone and later turns "five-word blurbs" into 2,000-word jokes. She said she finds a way to connect different things.

By using real-life experiences, Vivenzio said her material is more relatable and easier for her to remember.

"I think the best way to make people laugh is to laugh at yourself," she said.

"I don't want to sound like a robot," she said.

Vivenzio described herself as "an adrenaline junkie," who spends her life doing things that make her uncomfortable. Bartending gives her practice for the stage.

"You have to be entertaining," she said.

Vivenzio won't rehearse a set in front of anyone. But she will test material with co-workers, customers and friends.

"I sneak it into conversation and see how it goes down," she said.

Vivenzio said she hopes to continue doing stand-up comedy. She called it a "cool hobby."

"I would absolutely love for this to go somewhere," she said. "I would do this and bartend. Are you kidding me? That would be a great life."

Oddly enough, Vivenzio does not yet have any jokes about bartending. She does plan to perform some stand-up at the Saloon's 10th anniversary party on Nov. 2.

"I'll do some cracks on our regulars," she said, "because they'll love that."

Vivenzio said she is glad she won the contests because according to Kirson's website, "only 10 percent of all touring comedians are female."

Kate McKinnon of "Saturday Night Live" is one of her favorites.

"If I could meet her one day, I would die, I think," Vivenzio said with a laugh. "I would die of happiness."

DOVER — Following the success of last’s year comedy show, Dover Bar and Grill is gearing up for another round of laughs.