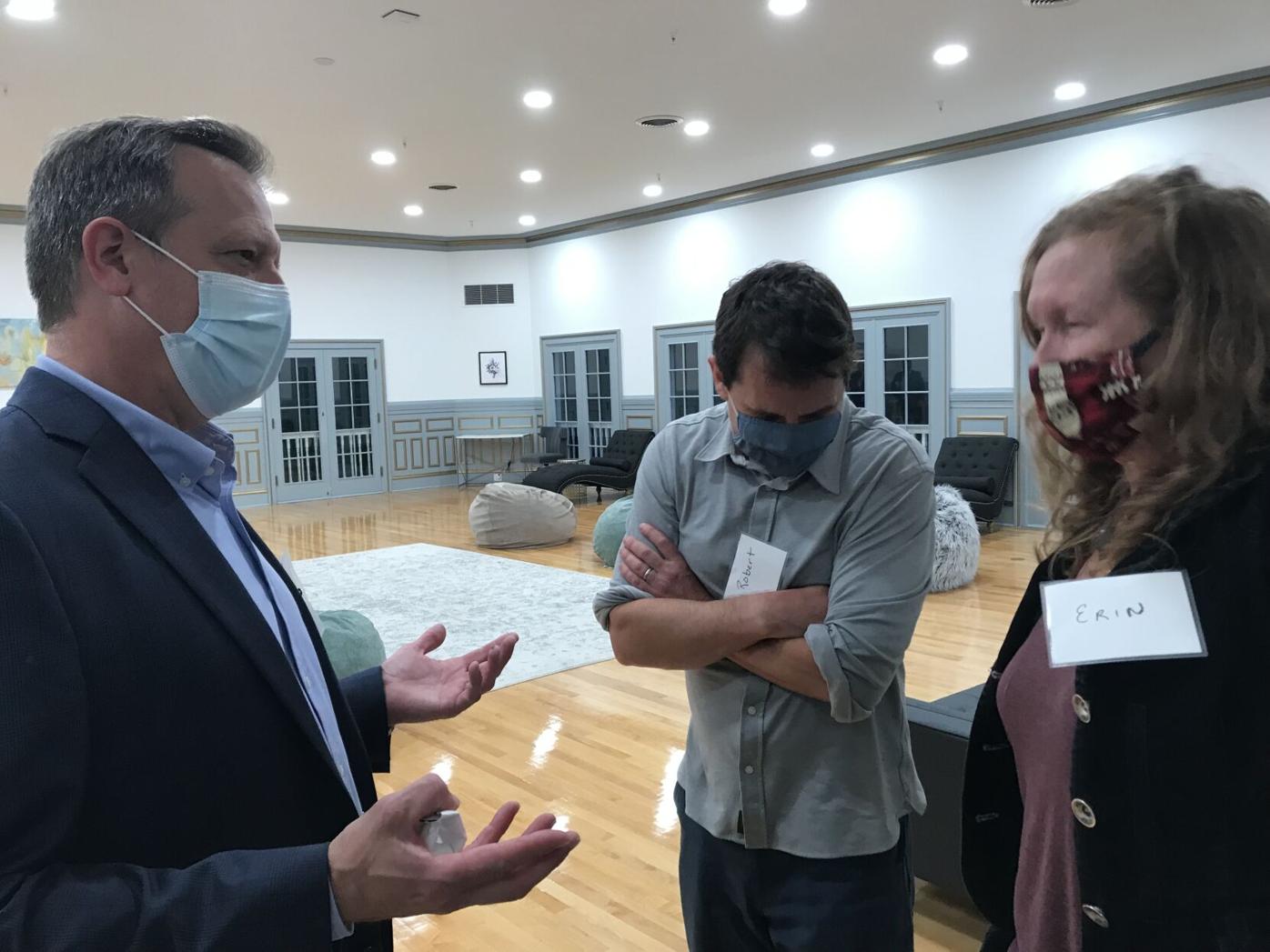 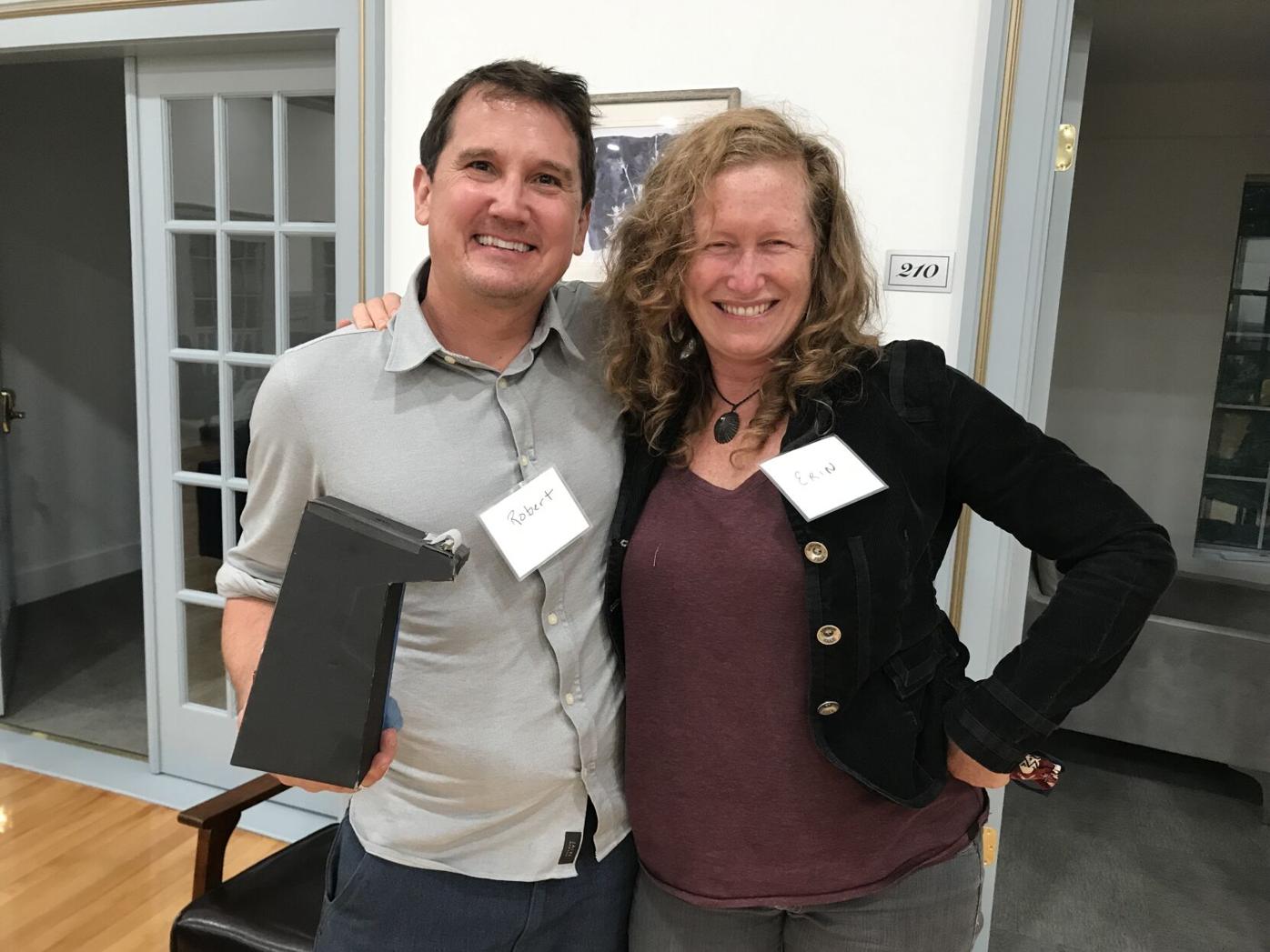 Robert Parks and Erin Maile O'Keefe show off a prototype of their Greeter Station at the Idea Jam at Vermont Innovation Box on Thursday, Sept. 9, 2021. 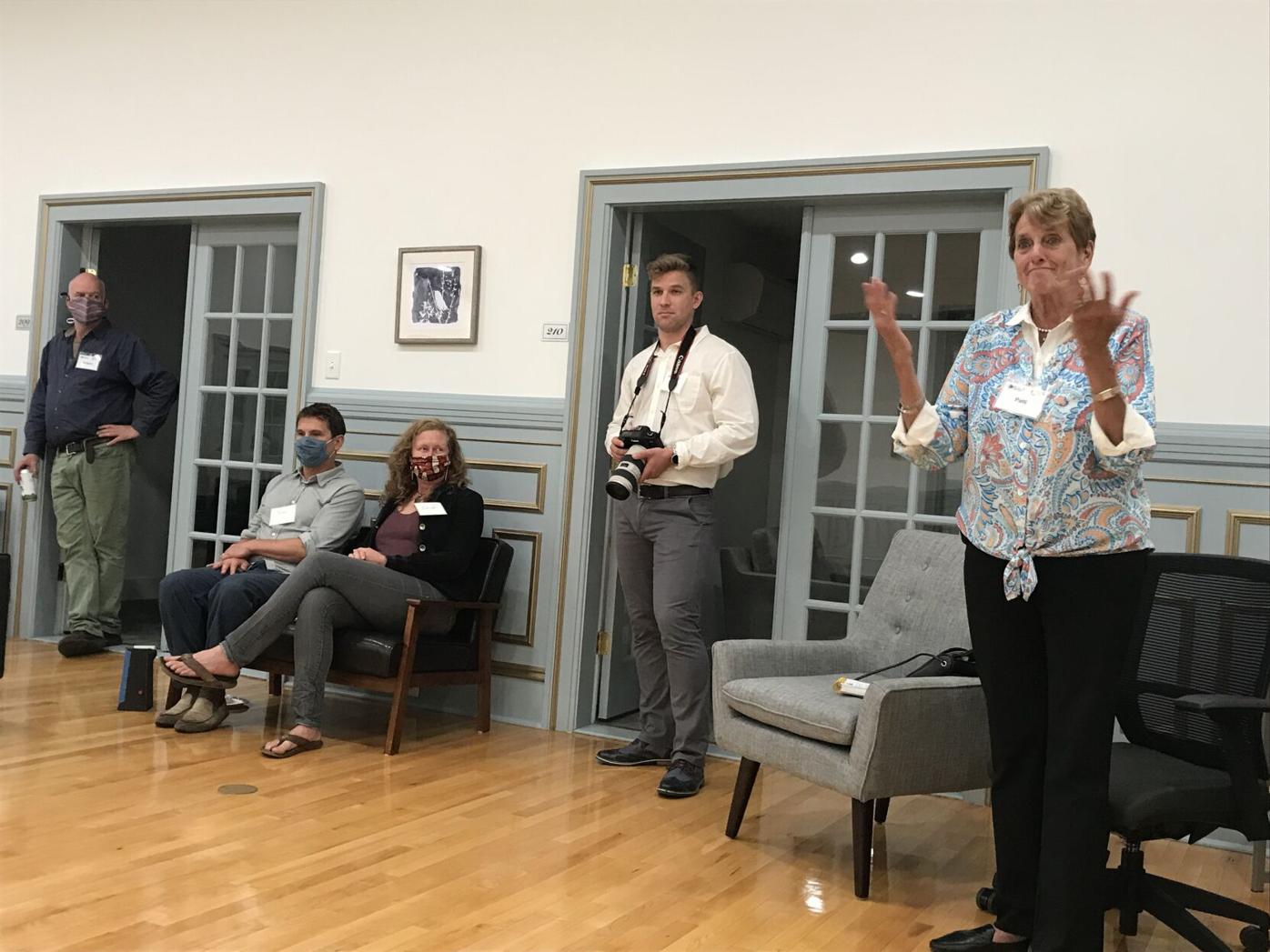 Patti Pusey of Halifax (right) shares for a second time at the Idea Jam at Vermont Innovation Box on Thursday, Sept. 9, 2021.

Robert Parks and Erin Maile O'Keefe show off a prototype of their Greeter Station at the Idea Jam at Vermont Innovation Box on Thursday, Sept. 9, 2021.

Patti Pusey of Halifax (right) shares for a second time at the Idea Jam at Vermont Innovation Box on Thursday, Sept. 9, 2021.

BRATTLEBORO — Getting creative and innovative community members together in a room to spitball ideas is at the heart of an event regularly hosted by the Brattleboro Development Credit Corp.

“We want a more vibrant economy and a friendly business culture, and that’s why we’re here and that’s why we’re doing events like this,” R.T. Brown, director of business acceleration and community capital development at BDCC, said at the Idea Jam held Thursday night at Vermont Innovation Box on Landmark Hill Drive.

Brown said an idea needs to precede a business pitch or a plan and has to be vocalized before it can lead to collaboration, mentoring and locating resources. He noted most successful businesses are the result of a partnership or collaboration.

Participants were given 60 seconds to present an idea and had opportunities to share more later. After the session, representatives from KeyBank for financing and Vermont Innovation Box for space as well as a marketing expert were available to chat with participants about support over food and drinks.

Erin Maile O’Keefe and Robert Parks went first presenting Greeter Stations, the next iteration of a project previously called Handy Stations. Local artists, technologists and musicians work together to create objects that welcome customers or clients into an establishment.

Patti Pusey of Halifax and her husband want to turn a barn into a sugarhouse where people could learn about the process of making maple syrup as well as agriculture and farming. They have a working farm, and owned and operated a bed and breakfast for 31 years.

“Our guests constantly want to hear about how to make maple syrup,” Pusey said.

Other ideas included renting out vacant vacation homes in Vermont to residents in need of housing; opening a laundromat/arcade on Main Street in Brattleboro; building a processing plant for hemp fiber; sourcing products other than timber from forests; providing architectural services for smaller projects at affordable rates; developing a computer application to help people achieve goals and look at such processes in different ways; and starting an employment hotline or service where workers can be hired by the day.

“All your ideas were great,” Chris Willett, operations curator at Vermont Innovation Box, told participants. “I took a lot of notes.”

He said he never went to an Idea Jam before Thursday. Participants were invited to tour the facility and chat with him.

“Most importantly,” he said, “we wanted to do an incubator program in southern Vermont and work with people with ideas, potential entrepreneurs, small company startups and that kind of thing.”

Willett said the plan is to provide resources to help people formulate their plans and grow.

“As they grow, they employ more people and that benefits the whole economy,” he said.

A second location with 12 small offices opened at 80 Flat St. in Brattleboro and a third is coming to downtown Bennington soon.

BDCC staff and Willett have been discussing ways to collaborate and partner on programs or services.

“We thought this would be a great place to start, which is an Idea Jam,” Brown said.

In 2015, BDCC completed a feasibility study exploring the viability of a traditional business accelerator in the region. Brown said a key takeaway was that “we needed more events like this to really serve as ignitors and sparks to get ideas bouncing off of each other.”

He admitted the impetus for the Idea Jam came from a professor who facilitated the BDCC’s inaugural Idea Jam when suggesting participants could share ideas they could not take credit for coming up as well.

About a dozen Idea Jam events have been held by the BDCC to date. Currently, the group is hosting another business plan contest and assisting with one in Dover.

Vermont Innovation Box and the Reformer, which is part of Vermont News and Media, share the same owner.