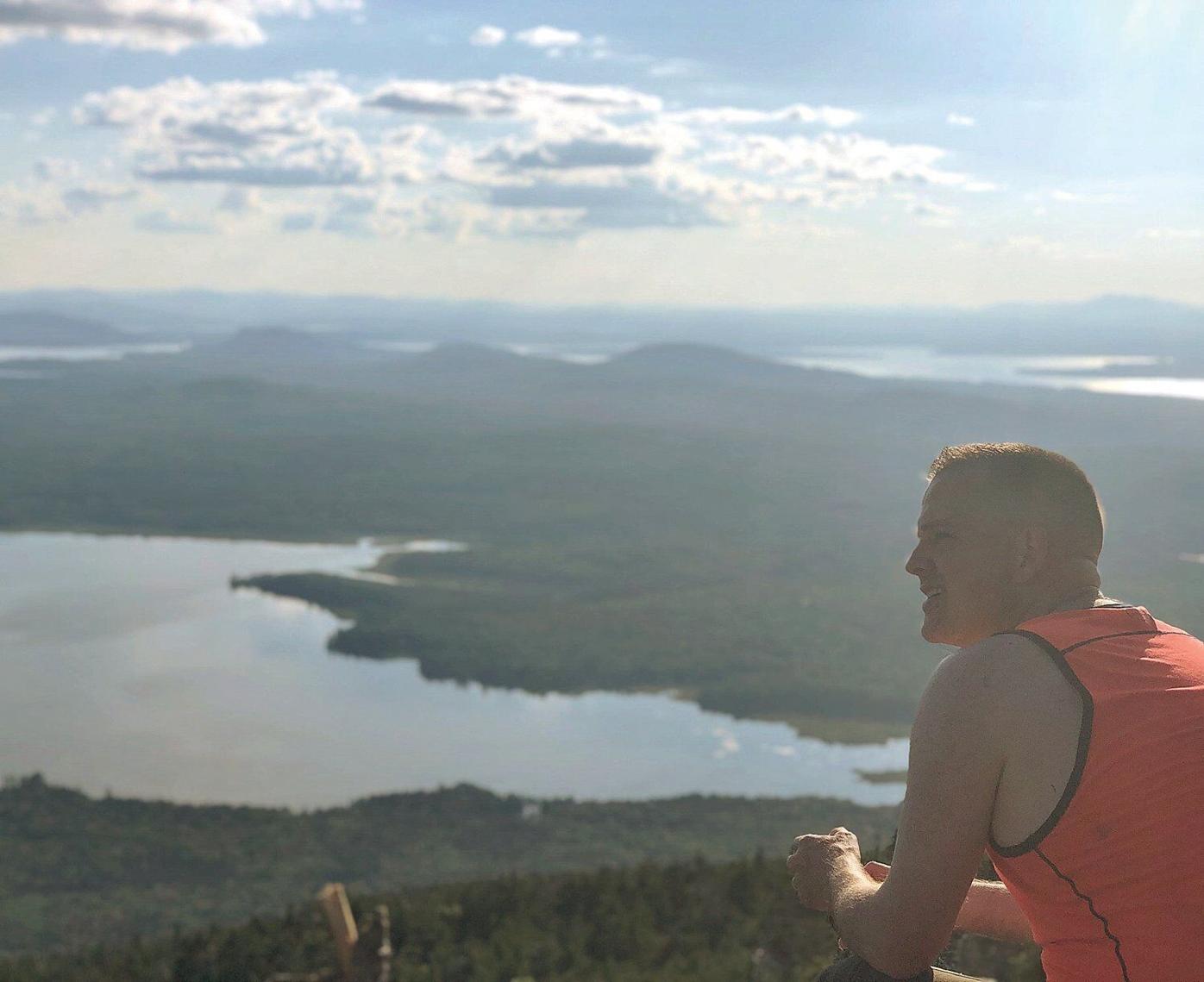 Spencer Crispe sits on a rock ledge with a view of Moosehead Lake in Maine. 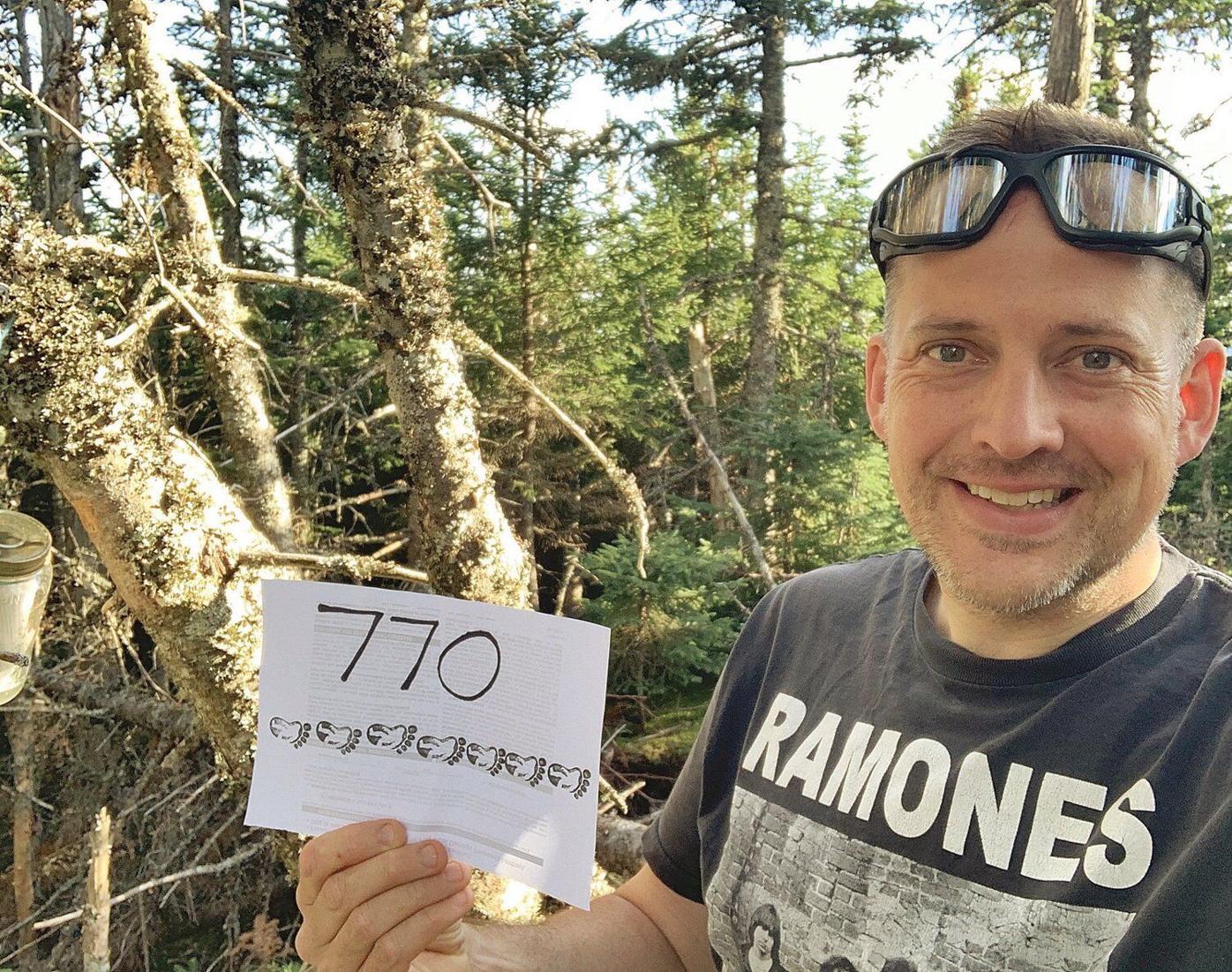 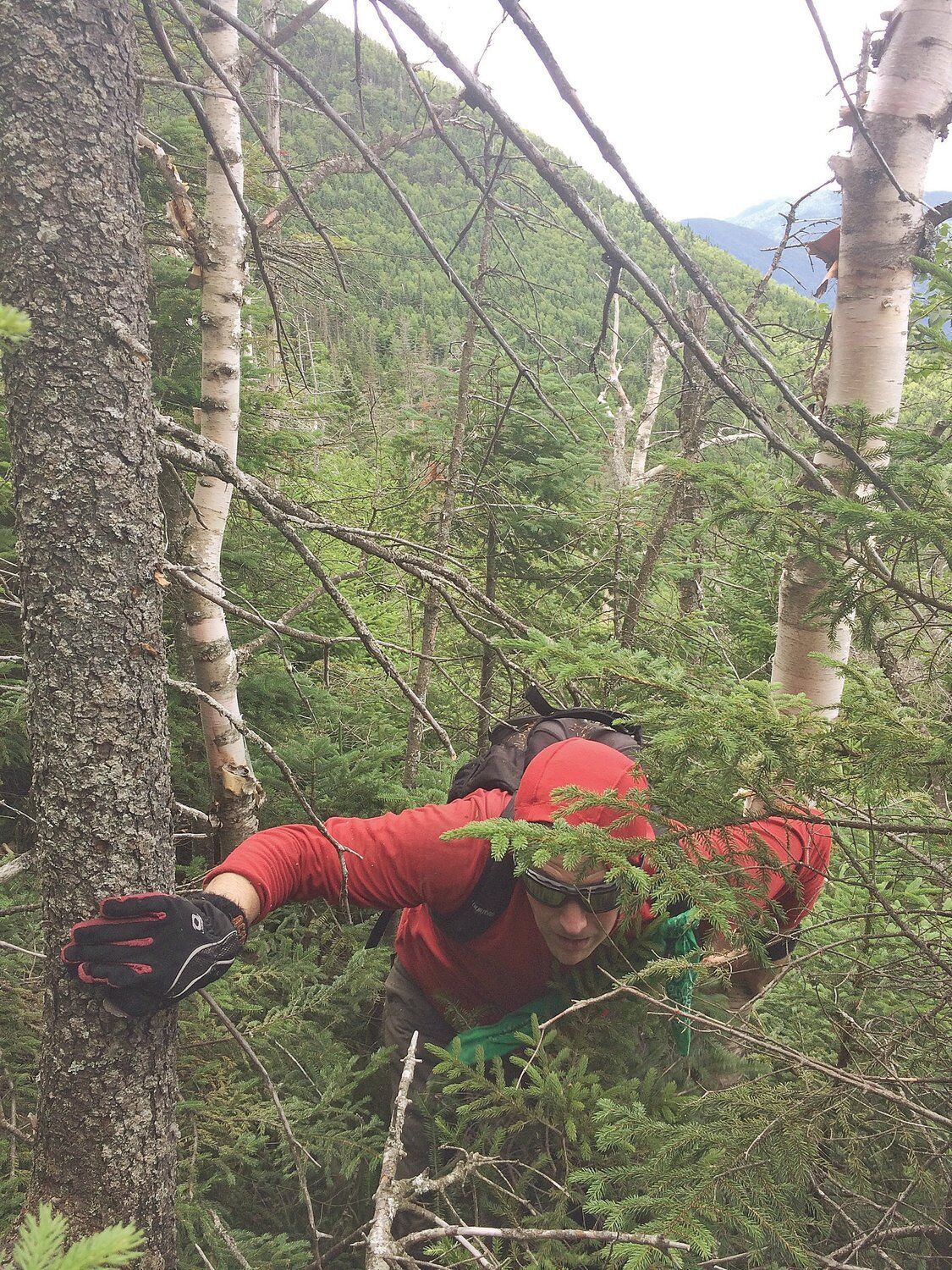 Spencer Crispe "bushwhacks" in the Adirondacks. 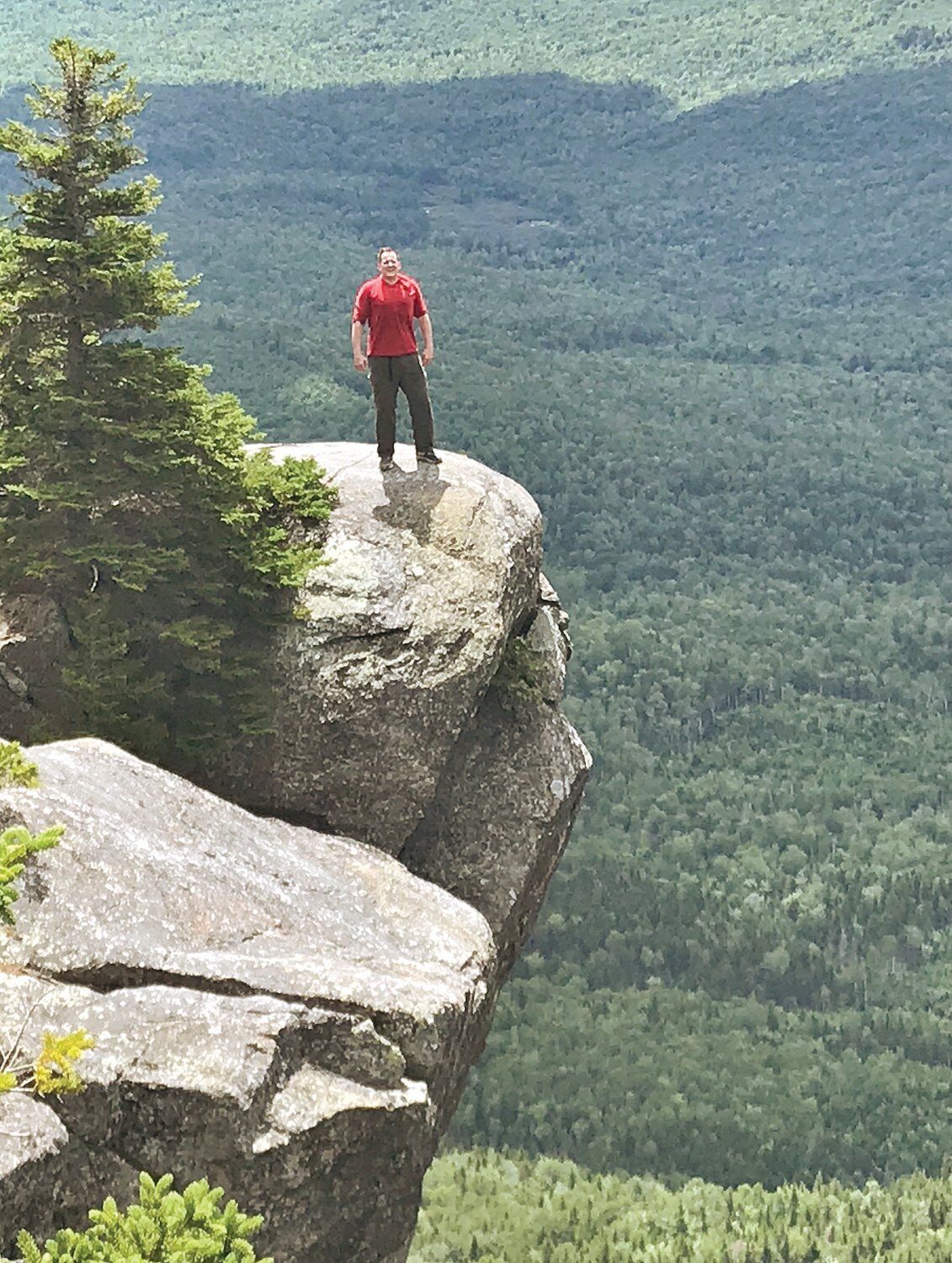 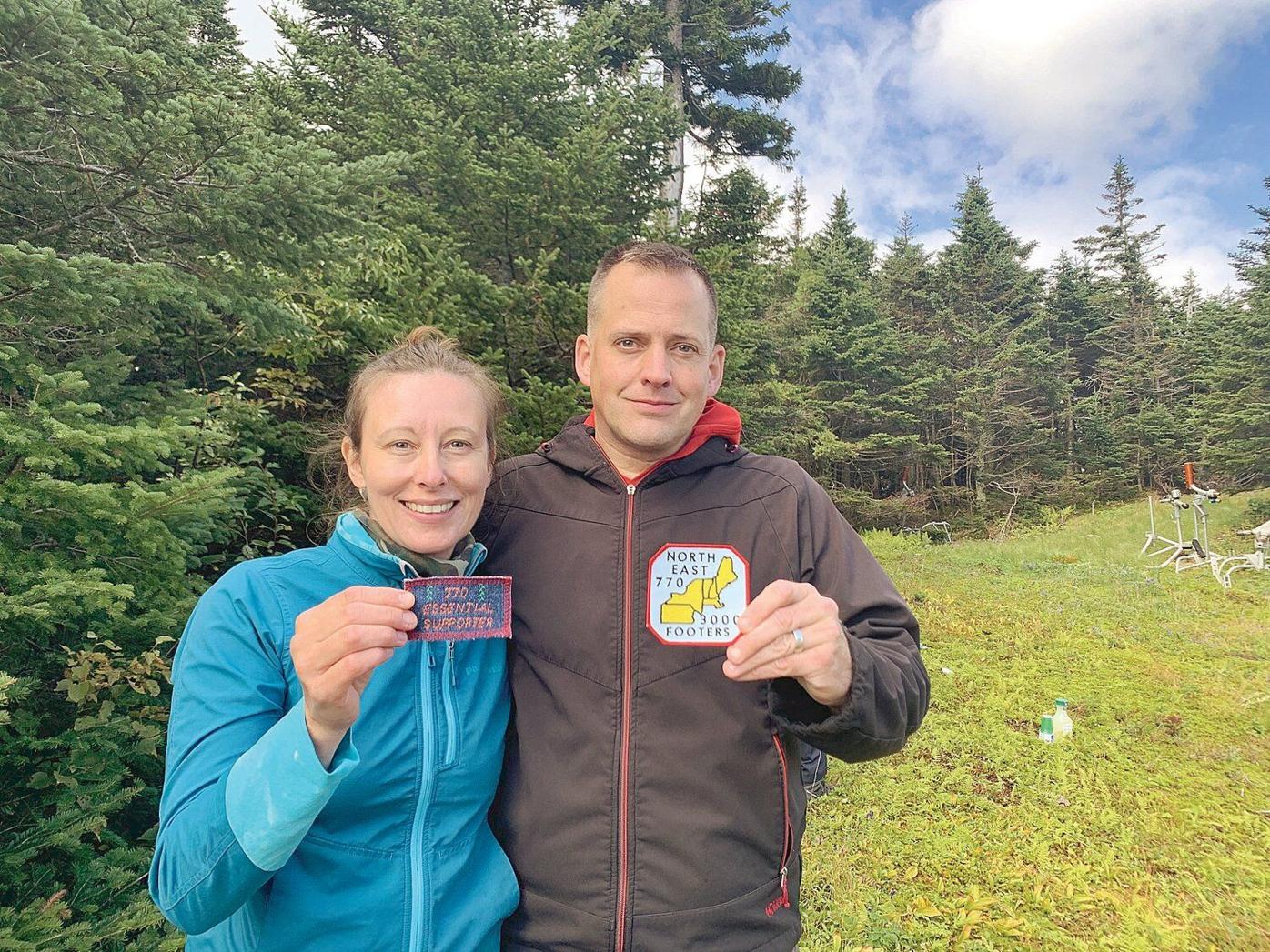 At Mount Snow, Renee and Spencer Crispe receive patches related to the challenge.

Spencer Crispe sits on a rock ledge with a view of Moosehead Lake in Maine.

Spencer Crispe "bushwhacks" in the Adirondacks.

At Mount Snow, Renee and Spencer Crispe receive patches related to the challenge.

WEST BRATTLEBORO — An avid hiker pulled off a feat only 12 people have accomplished so far.

On Aug. 15, Spencer Crispe of West Brattleboro climbed Spencer Bale Mountain in western Maine, the last of the 770 mountains in the northeastern United States that are higher than 3,000 feet in elevation. He's the first

Vermonter known to have pulled it off.

"This is considered one of the very hardest hiking challenges," he said. "I was attracted to attempting it because of how unreasonably long and ludicrous it is."

Crispe is a ninth generation, lifelong Vermonter. He also is

Over the last "roughly" eight years, he spent nearly every non-winter weekend on mountains from Pennsylvania to Maine. His wife, Renee Crispe climbed more than half of the 770 with him.

Less than half of the mountains have a trail to the summit, Crispe said. That required him to "bushwhack," a term used for traveling off trail.

Crispe described "hellish conditions" when sharing his stories about going through thick spruce and fir trees, which he compared to prison bars. He said he tore and shredded so many items of clothing, and he wore glasses to avoid cornea abrasion.

"Sometimes I would come out of the woods looking like a shag rug covered in mud," he said. "Sometimes during off-trail travel, I am bushwhacking at a quarter mile an hour. It can take a herculean effort to advance even one foot."

He said in his longest hike, lasting 16 hours in the Adirondacks, he covered several peaks and didn't return from the woods until 2 a.m. A few other hikes required 14- and 15-hour days.

One memory from the longer hikes involved Renee falling asleep on a boulder during a rest break on the descent.

One time, the couple encountered three bears — a mama and two cubs — next to a brook in the Catskills. Crispe said one cub was in a tree.

"It scared the hell out of us and we walked in the opposite direction but it was so cool to see," he said. "That's the exact paradigm you don't want to come upon."

Crispe also recalled seeing a moose that was far larger than any other he had ever seen. He said the animal took up the vast majority of a road way.

"It looked like a fictitious prehistoric steroid moose," he said.

On Mount Washington on July 5, the temperature with windchill was said to be 14 degrees. Renee had to crawl for part of the hike "to prevent the wind from blowing her into Rhode Island or something," Crispe said.

"There were just so many cool challenges, and the overwhelming majority of these mountains are on public forestland," he said. "There's only a small few I had to get permission to climb."

Although the hikes could be grueling at points, Crispe said sometimes he would just come upon "the best view that almost nobody has seen. So you're getting a perspective of the world that is unique, that you had to really work for and earn."

The 770 mountains included two in Massachusetts, four in Pennsylvania, 167 in Maine, 176 in New Hampshire and 217 in the Adirondacks.

On Sunday, Crispe received a patch from the first people to complete the challenge — Dennis Crispo and John Swanson — at the summit of the Mount Snow ski resort in West Dover. Renee received a patch for being an "essential supporter."

Crispe said he always told people where he was going and carried a lot of safety equipment. He brought extra lights, compasses, warm clothes and a satellite phone.

In January, Crispe completed another challenge. He climbed and skied down all 110 of Vermont's major mountains. His goal had been to finish both projects this year.

For now, Crispe is not sure what's next.

"I'll think of something," he said.

Recently, Crispe resigned from the Wilmington Trails Committee after about 12 years. He's now helping with the Missing Link Trail Project in Dummerston to connect to Putney's trail network.

Crispe feels it's important to give back.

"These trails don't build or maintain themselves," he said. "So I get out and do a lot of volunteer trail work. I like doing it."

The northeast "just such a beautiful place," Crispe said. "There's nowhere I'd rather live than here."