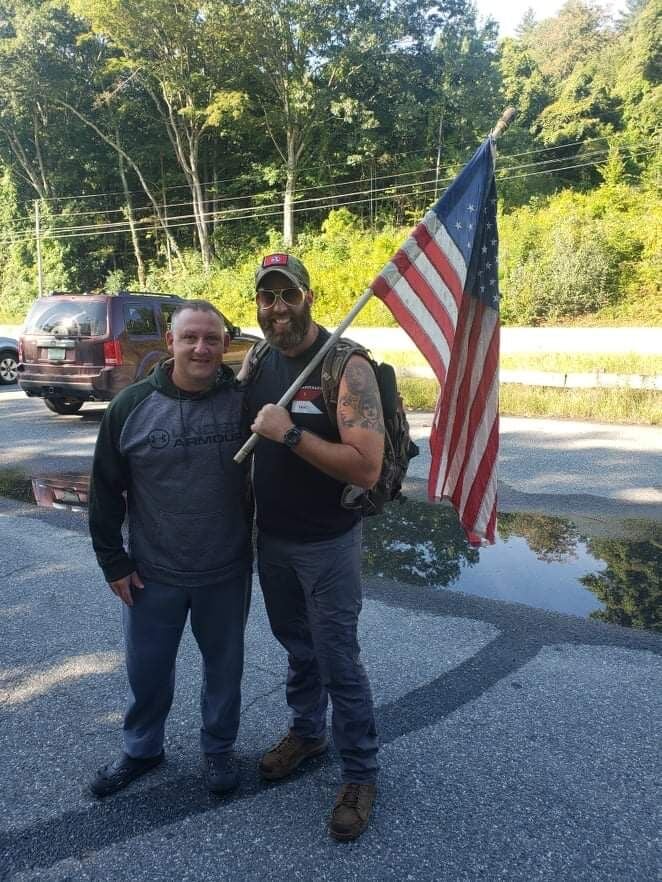 On his walk, Chase Stanley stops to take a photo with his friend Dan Hiner. 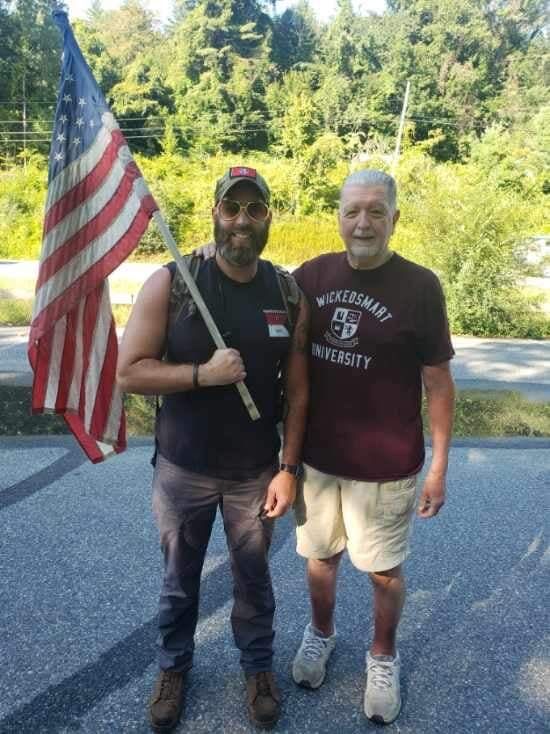 Chase Stanley stops for a photo with his cousin Gene Whitney. 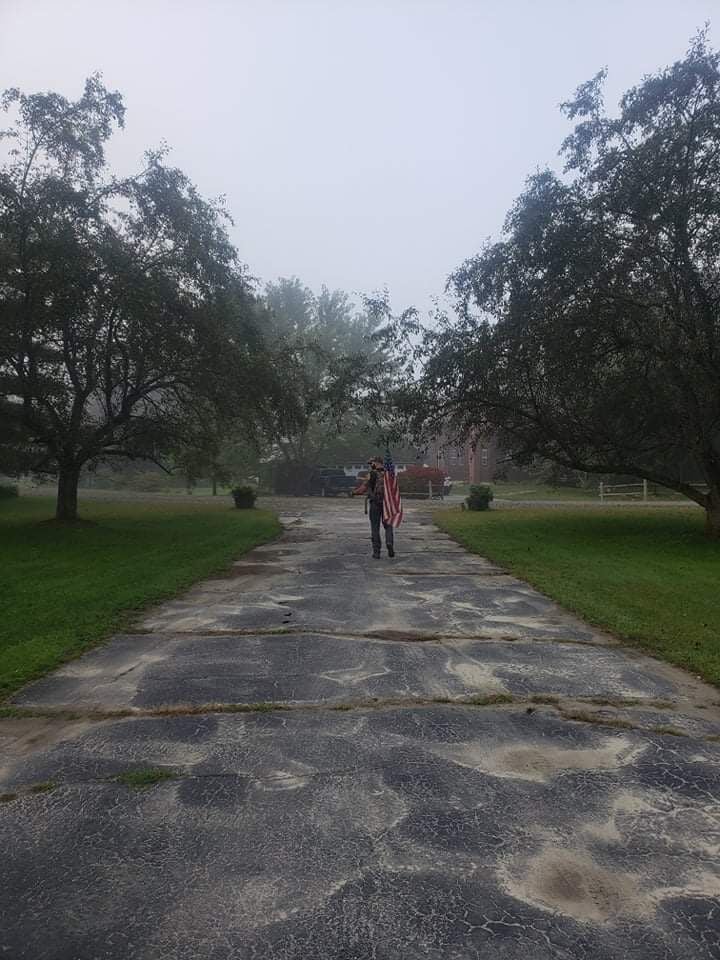 Chase Stanley walks to raise awareness and funds for the National Alliance to End Veteran Suicide. 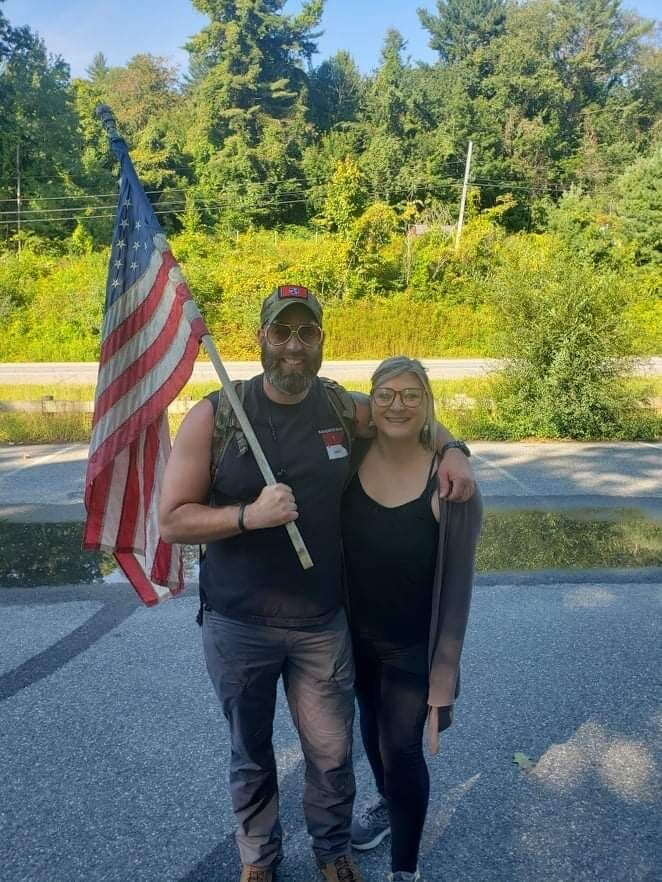 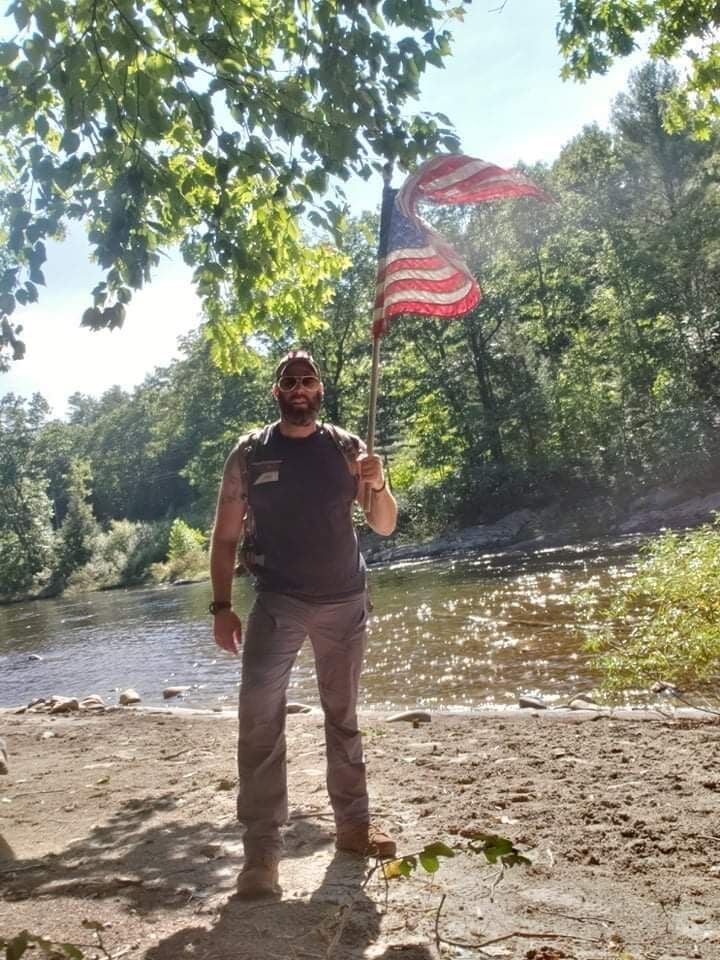 Chase Stanley raised awareness and funds for the National Alliance to End Veteran Suicide during a 22-mile walk on Sept. 22, 2021. 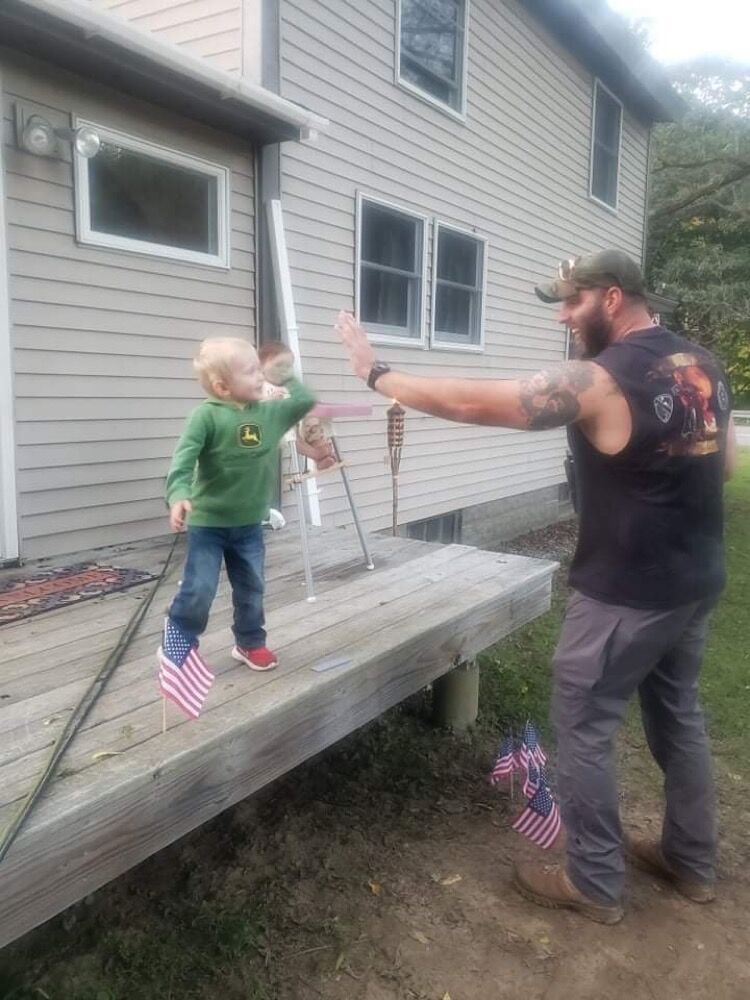 At the end of his walk, Chase Stanley gets a high-five from godson, Austin Fletcher.

On his walk, Chase Stanley stops to take a photo with his friend Dan Hiner.

Chase Stanley stops for a photo with his cousin Gene Whitney.

Chase Stanley walks to raise awareness and funds for the National Alliance to End Veteran Suicide.

Chase Stanley raised awareness and funds for the National Alliance to End Veteran Suicide during a 22-mile walk on Sept. 22, 2021.

At the end of his walk, Chase Stanley gets a high-five from godson, Austin Fletcher.

NEWFANE — For a couple of years now, Army veteran and former Brattleboro Police Department officer Chase Stanley has kicked around the idea of taking a long walk to clear his mind. It had been one of his many New Year’s resolutions this year.

“With all the things going on, it was a good time to remember the sacrifices some people in our country have had to make,” Stanley said.

On the 20th anniversary of Sept. 11, 2001 terrorist attacks on Saturday, Stanley started the 22-mile walk in Newfane and ended in Brattleboro after about 11 hours. Via Facebook until Sept. 24, he’s raising money for the National Alliance to End Veteran Suicide. He also read the names of the 13 soldiers who recently died in the Kabul bombing in Afghanistan.

As a senior in high school in Virginia at the time of 9/11, Stanley said the event changed his life forever and led him to join the military then seek a career in law enforcement. He vividly remembers seeing the second World Trade Center tower getting hit by a plane on television that day.

Serving in the Army from 2005 to 2010, Stanley was stationed in Korea, Iraq and Fort Hood, Texas. He joined the Brattleboro Police Department in 2013 and has since left to work for the town of Brattleboro at the Pleasant Valley Water Treatment Plant.

Stanley stayed on Route 30 for the most part on his way to Brattleboro on Saturday, stopping at friends’ houses along the way and when friends would pull over in their vehicles.

Brian Squires, an Army veteran, joined him for a portion of the walk. Stanley said it was “good to have someone to chat with.”

“We talked about our old Army memories, which was good,” he said.

First, they stopped at the Elks lodge then the Veterans of Foreign Wars, where former coworkers and current officers at the BPD met with Stanley. He made his way to the American Legion then the Kyle Gilbert memorial downtown.

Gilbert was killed in Afghanistan in 2003 while serving in the Army. Stanley saw Gilbert’s mother at the VFW on Saturday.

Stanley walked around downtown after paying his respects to Gilbert before stopping at the fire station then the Legion and Elks again. He ended the walk at his godson’s home in Brattleboro.

“It was a long journey,” Stanley said.

During the walk, he thought about friends from the Army who died through combat or suicide over the years. He wondered if he had missed any signs of depression.

“I can’t explain why they came to the decision to end their own lives,” he said.

As an Army veteran and former police officer, Stanley has experienced what he described as “depression and dark times.”

“It’s hard not to get down on yourself every now and then,” he said. “Thankfully, there are resources out there. The hardest part is coming forward and saying, ‘I need some help.’”

Stanley said that through the years, he received a lot support from his wife and coworkers.

His plan to raise money for the National Alliance to End Veteran Suicide came about only within about 24 hours before the walk began. He said as he thought about it, the more he realized, “Hey, if I’m going to do it, maybe someone can benefit from it.”

“Luckily, the community and everyone jumped on board really quickly,” he said. “We raised more than I ever expected.”

At the time of the interview Monday morning, Stanley had raised about $6,500 through the walk. He said the campaign can be found on his Facebook page or funds can be donated directly to the organization.

The 22 miles symbolize a grim statistic: about 22 military veterans die by suicide every day. Stanley said he hopes to bring that number down by holding an annual walk and inviting others to join him in raising awareness and funds to create programming and services.

Tiffany Stanley said her husband finished the walk at about 7 p.m. Saturday.

“It was amazing,” she said Sunday morning. “He was very emotional.”

Stanley said, “Honestly, it was emotional through the entire process.”

“The last couple of miles definitely got to me,” he said, noting that he was affected not only by the physical challenge but also the sadness over knowing the walk would soon end and there’s not enough resources out there to help veterans.

While Stanley exercises a lot, he said he will have to practice a few longer walks before setting out to cover 22 miles again.

“I think little stuff like I did,” he said, “makes the world a little more positive.”

Money raised via Facebook is going to the National Alliance to End Veteran Suicide. Tiffany said the platform was chosen because all of the funds will go directly to the nonprofit.