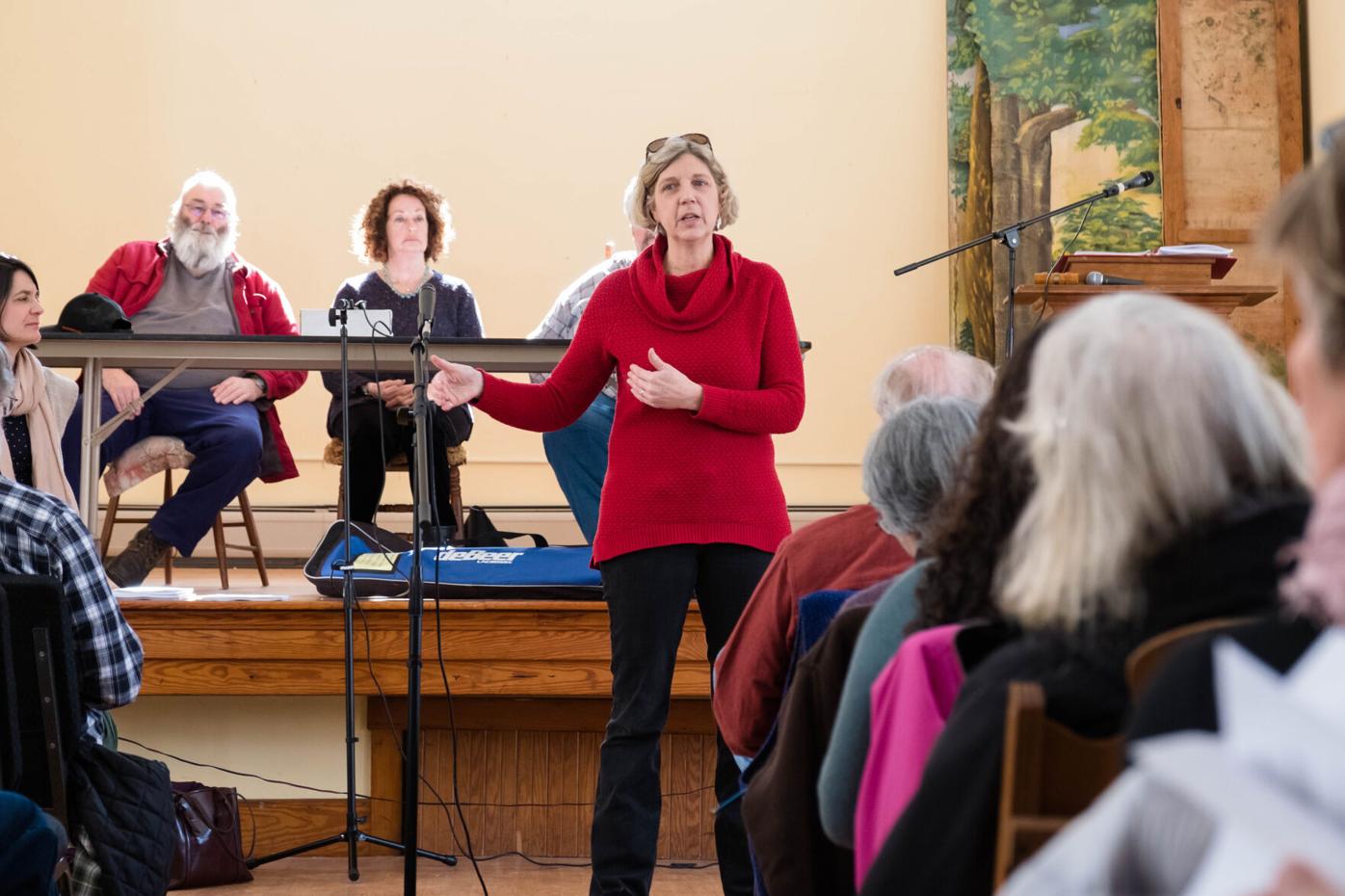 State Rep. Emily Long, seen at Newfane Town Meeting in 2019, was elected as the Democratic House Majority Leader on Saturday. 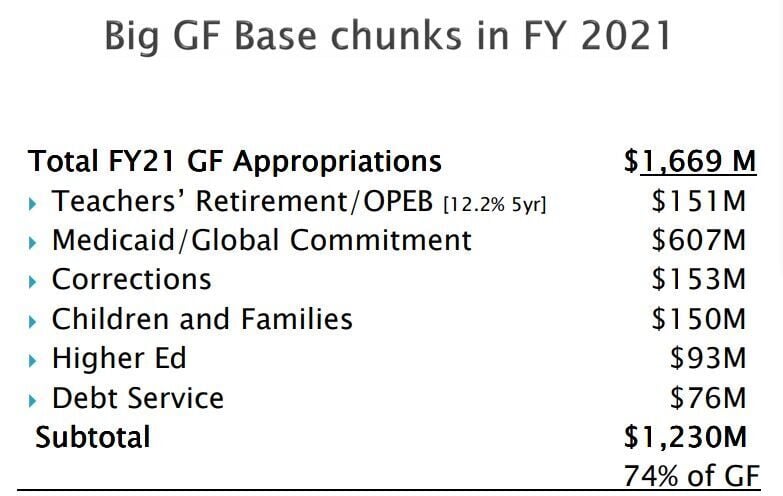 This chart from the Legislative Joint Fiscal Office, presented to House and Senate members on Thursday, shows how much of the General Fund was spent on just six categories in fiscal 2021. Allocations for higher education and the teachers' retirement fund are expected to increase for fiscal 2022.

State Rep. Emily Long, seen at Newfane Town Meeting in 2019, was elected as the Democratic House Majority Leader on Saturday.

This chart from the Legislative Joint Fiscal Office, presented to House and Senate members on Thursday, shows how much of the General Fund was spent on just six categories in fiscal 2021. Allocations for higher education and the teachers' retirement fund are expected to increase for fiscal 2022.

With Democrats and Republicans choosing leadership positions this past week, their attention now turns to the task ahead: Guiding Vermont out of the COVID-19 pandemic.

While the Democrats made changes in the House leadership team on Saturday, the Republicans kept their leadership team in place. Rep. Pattie McCoy of Poultney is returning for another two years as Minority Leader. Rep. Rob LaClair of Barre Town will reprise his role as Assistant Minority Leader, and Anne Donohue of Northfield will again serve as at-large member of the House Rules Committee. That vote took place last Monday.

"This legislative session will present us with a number of challenges, both as it relates to COVID-19 and Vermont's underlying demographic and economic trends," McCoy said in a press release announcing the House GOP vote. "But I'm confident that, if we put aside partisan politics, and partner with our counterparts — Senators [Randy] Brock and [Brian] Collamore — in the Senate, we can set Vermonter on a solid trajectory."

On the House side, the elevation of Rep. Emily Long of Newfane to Majority Leader by the House Democratic Caucus gives the region another important seat at the leadership table. Long was the only lawmaker nominated for the post, and she was a unanimous choice.

That’s not as geographically broad as the Senate’s leadership group of Becca Balint of Brattleboro, Alison Clarkson of Woodstock and Cheryl Hooker of Rutland. But consider this: Two of the most important leaders in the Statehouse — Balint, who, in a month will likely become the next Senate President pro tem, and Long, who will be crucial to Krowinski's efforts as Speaker — are women from Windham County. That's as far away from Burlington as you can drive on an interstate and not have to quarantine. In a state where grumbling about Chittenden County's outsized influence is often heard, and sometimes deserved, that’s a significant accomplishment.

Balint, for one, said Long was a "great choice" for House Majority Leader.

"She has really earned the respect from her caucus and form many Senators as well," Balint said. "She's smart, hard-working, and she understands the delicate politics at plat on any given issue."

"She's also completely trustworthy," Balint added. "Jill Krowinski is lucky to have her in that role. She's a real team player."

The selection of McCarthy as assistant majority leader and whip — the position responsible for keeping caucus members singing from the same sheet music — is an interesting choice. It could be viewed as Democrats trying to keep a high profile in Franklin County, which has become a key Republican stronghold. But electing McCarthy as the House's chief disciplinarian could also be viewed as a signal welcoming cooperation with the GOP. McCarthy himself described his district as “purple.”

“We need to stay true to Democratic values,” McCarthy said Saturday. “At the same time, we need to be inclusive. We want to make sure we build and hold onto strong coalitions.”

In her address to members, Long made clear that the COVID-19 recovery will remain a front and center priority.

“As legislators, we’ve been hearing some painful stories about the struggles Vermonters are dealing with during this global pandemic,” Long said. “Yet we’ve also been witness to an amazing number of people and organizations who stepped up to help those in need. It is so gratifying to see the community support that has grown during this time as well.”

That said, there’s a lot of work ahead, Long warned.

“Vermonters expect us to overcome our differences and pass policies that will grow Vermont’s economy during the pandemic recovery,” she said. “ Policies that assist working families, protect our environment and maintain our culture.”

“As we do this work… you will contribute to our successes in your own way,” Long said. “My goal is we will create opportunities for you to easily share your strengths and your knowledge so they become an integral part of policy goals.”

Voting was only a small part of Saturday’s caucus. Reps. Tristan Toleno and Emilie Kornheiser, both of Brattleboro, helmed the Zoom controls for a series of breakout sessions in which members were asked to gather in small groups and discuss priorities for the coming session.

Some of the issues reported back from the breakout groups are familiar by now. There’s widespread support for universal broadband expansion, for a slew of reasons. It’s seen not only as essential for students and workers, but as a vital ingredient in retaining new Vermonters who have moved here during the pandemic, and as a game-changer for erasing the urban-rural divide.

On the topic of supporting young families, Rep. Kathleen James of Manchester said issues such as child care, affordable housing and family and medical leave all mesh with the party's priorities. “All the things we talk about as core Democratic values and key priorities taken together pose the long term solution to Vermont’s pressing demographic and economic challenges,” she said.

Racial and social equity remain big concerns for lawmakers, many of whom would like to see every bill viewed through an equity lens before passage. Others pointed food insecurity, which has been a key concern throughout the pandemic, and how solutions to hunger could also prove beneficial to Vermont farmers. And the concept of an "Economic Solutions Act" addressing multiple equity issues was raised more than once.

Child care remains a pressing issue in terms of accessibility, affordability and the need to pay providers a living wage, as highlighted by Rep. Sara Coffey of Guilford. She raised the possibility of full pre-kindergarten across the state’s elementary school, and “breaking down silos” between the Education and Human Services committees to look at “how we’ve increased qualifications [for child care] without giving support and investment to those workers.”

There was also significant interest in the ongoing reboot of the Vermont State Colleges System. A number of lawmakers viewed ongoing efforts to reinvent the system as an opportunity that can be leveraged for the entire state, particularly in matching academic and training programs with employer needs. Others said it could be a source of innovation and training for green energy jobs supporting the state's climate crisis response.

Maida Townsend of South Burlington said her breakout group discussed the threat posed by right-wing extremists, and how it affects life and the Legislature’s work in several ways. The threat of violence, and the fear it generates, produces “a high level of anxiety and concern for people’s well being in terms of physical safety and mental health safety,” she said.

Rep. John Gannon, D-Wilimington, said the Legislature needs to develop more expertise in addressing the state’s unfunded pension liability, which continues to gobble increasing amounts of general fund revenue. ”Unless we really start to address this issue we’re going to keep funding pensions yet not address our liability,” he said.

IN THE NOT-TOO-DISTANT FUTURE ...

When lawmakers will return to in-person legislating in Montpelier is anyone’s guess. But it won’t be soon.

As outgoing House Speaker Mitzi Johnson informed House members during an informational briefing this week, the Joint Rules Committee has determined that at least for the month of January, both the House and Senate will meet and vote virtually.

The Legislature's opening sessions, on January 6-7, are a bit more complicated. The House will move its opening proceedings to the Barre Municipal Auditorium, one of the few buildings in the state large enough to accommodate its membership in a practical way. Another meeting of the House Rules Committee is set for Dec. 17, Johnson said, and that panel will consider whether to make it possible for members to participate in the opening session remotely.

The Senate, meanwhile, is contemplating holding its opening proceedings in person, but doing so by moving members though the building in shifts for swearing in.

For newly-elected lawmakers, especially new members of the Legislature, the opening joint session is an important occasion. Aside from the pomp and circumstance, and the personal meaning for lawmakers and their loved ones, it’s an opportunity for all of Vermont to take pride in its culture of citizen government. So there’s a balance to strike.

But Vermont ingenuity is a real thing. We will see how it’s used to preserve or update opening session traditions, and carry on the people's business until a vaccine brings lawmakers back to the Golden Dome.