Jonah Mossberg and Emily Hartz hold their child, Simon Hartz Mossberg, inside a greenhouse at Milkweed Farm in Guilford. 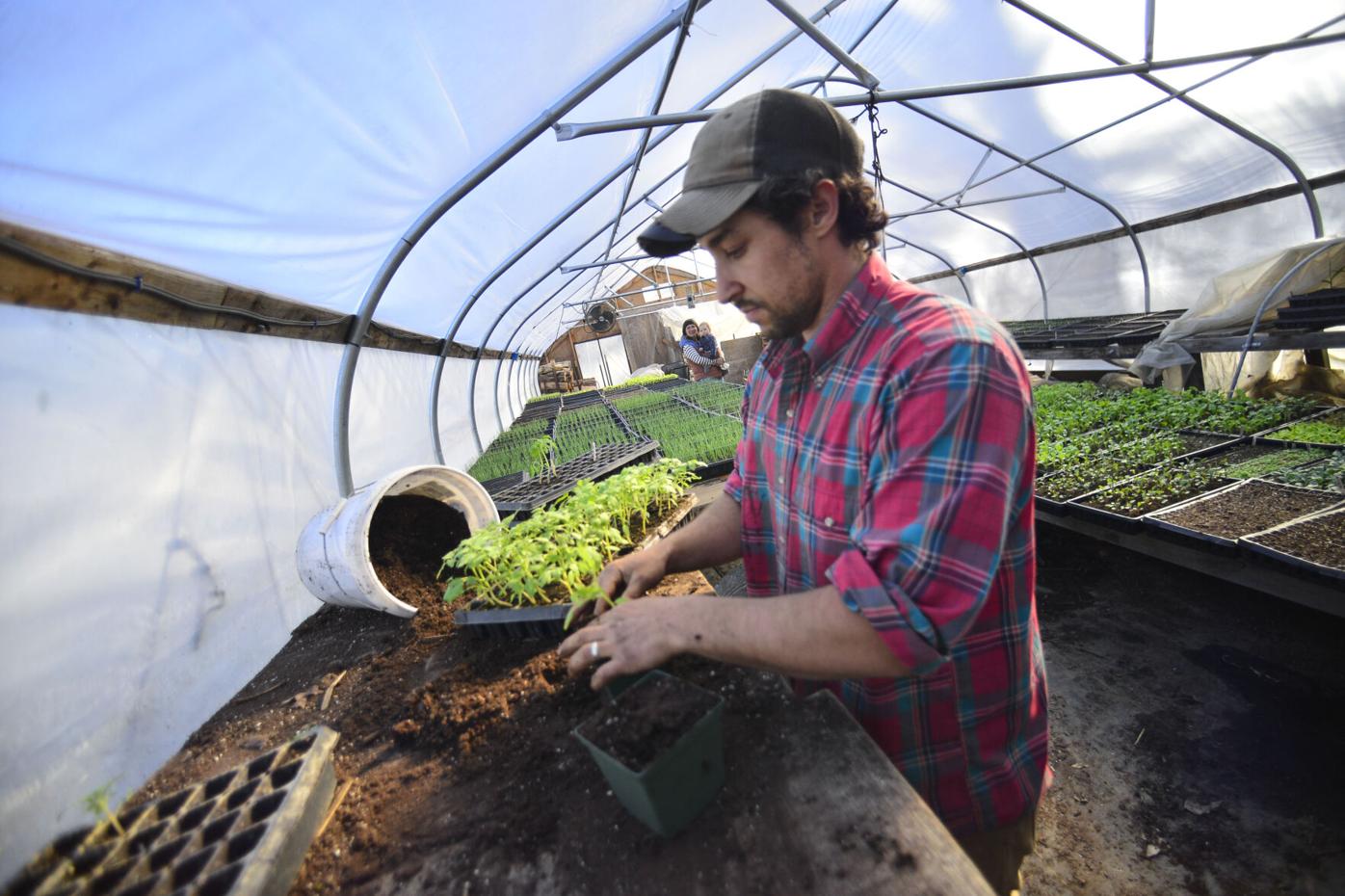 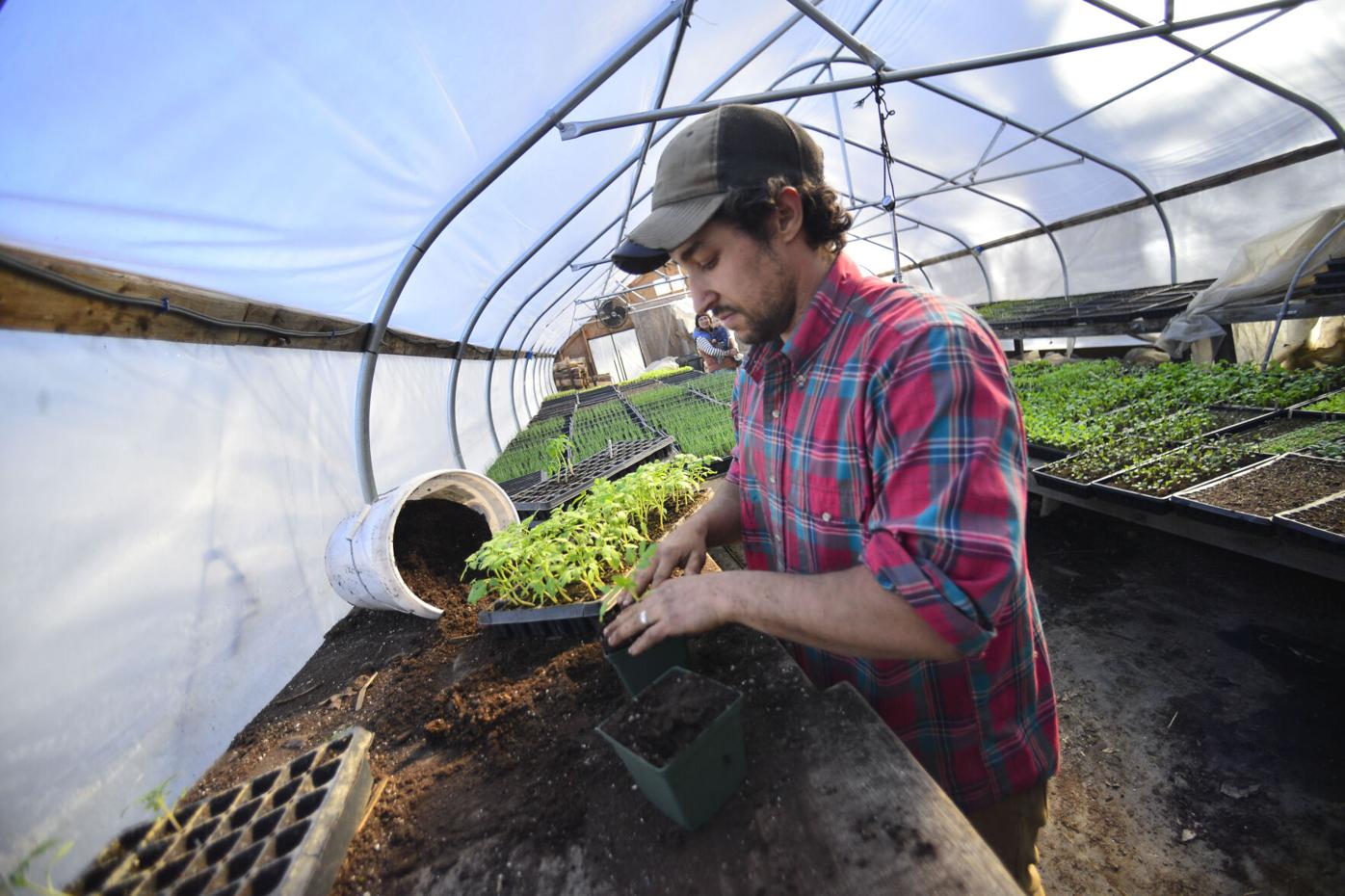 Jonah Mossberg and Emily Hartz hold their child, Simon Hartz Mossberg, inside a greenhouse at Milkweed Farm in Guilford.

GUILFORD — Already popular in the tri-state region, CSAs quickly sold out of shares last year as the pandemic gripped the nation.

A CSA, Community Supported Agriculture, is a production and marketing model whereby consumers buy shares of a farm’s harvest in advance. This year, shares are again selling fast and some local farmers are hoping to keep up with the demand.

“We were planning to double our membership this year,” said Jonah Mossberg, who operates Milkweed Farm in Guilford with his partner, Emily Hartz. But their three-year lease on Mineral Springs Farm in Guilford Center expires at the end of this year and they need to find a spot to put down permanent roots.

“Leasing for us was a great way to get started, but we need more stability to expand our customer base,” said Mossberg.

Milkweed Farm got started at the Vermont Agricultural Business Education Center, where Mossberg and Hartz raised products to be sold at the Brattleboro Area Farmers’ Market. It wasn’t their original intention to start a CSA, but that’s what happened and now they’d like to really put down roots in Guilford.

“Most of our customers are here,” said Mossberg. “We love this community and we’ve got a good thing going on.”

Chuck Collins, who bought Mineral Springs in 2018 with two other families, said he has an amicable relationship with Mossberg, who he described as an extraordinary person who grows wonderful vegetables.

“We enjoyed having him here,” said Collins. “But we don’t want to be landlords anymore and he deserves a land base that provides him with security.”

Collins said when the families purchased the property, the goal was to eventually go into producing their own food, and now, after three years of leasing the space to Milkweed, they are ready to get their own operation going.

“We invested a lot in infrastructure to help the operation happen, including electrifying a barn and paying for soil amendments,” said Collins. “We are just not in a position to continue that relationship.”

That leaves Mossberg and Hartz just one year to find someplace new where they can set up for the long term.

Finding five to 10 acres of arable land in Guilford that is affordable and has at least a house on the property, has been frustrating for Mossberg, who needs a permanent place to set up his greenhouses, refrigeration and other equipment.

“We really want to stay here, but we can’t find what we need,” he said.

Part of the problem is the rolling topography of Guilford, but perhaps more important is the hot real estate market since COVID-19 was declared a national emergency and “pandemic refugees” decided to pull up stakes in urban areas and move to rural Vermont.

“There is a very low inventory of land and a huge buyer pool,” said Mossberg.

John Hatton, sales manager at Berkley & Veller Greenwood Country Realtors in Brattleboro and President of the Southern Vermont Board of Realtors, agreed with Mossberg, saying arable, affordable land in Guilford “is really hard to find.

“In Guilford, there are maybe two listings on the market but neither is what he is looking for,” said Hatton. “He’s looking for a unicorn.”

Hatton said if Mossberg and Hartz can’t find what they are looking for in Guilford or nearby towns, they might find something elsewhere in Vermont.

“That sort of property does exist, but it’s not where he wants to be,” said Hatton.

Finding a permanent spot is important to Mossberg because Milkweed Farm is focused on building soil biology through a commitment to low and no-till organic practices. To do so, Mossberg must on a regular basis add organic matter and mineral amendments while practicing low-tillage farming. But doing that work on leased land is not sustainable, said Mossberg.

“Farming is about more than just producing food and feeding people,” he said. It’s also about resiliency and sustaining the land so it can provide sustenance for the long term, he said.

And the community that is built around CSAs, said Mossberg, is just as important to cultivate as well, especially in divisive times. “Food and farming are lenses through which we can choose to view and interact with many different intersecting issues.”

One of those areas of intersection is the production of food by members of marginalized communities, he said.

“Our real estate market and food system makes it dangerously hard for young farmers, and queer farmers, not to mention BIPOC [Black, Indigenous and people of color] farmers and others with barriers to capital, to do the important work of feeding our community that they are working so hard to do,” he said.

About a decade ago, Mossberg made “Out Here,” a documentary film that explores life on seven farms run by LGBT people.

“[S]mall-scale sustainable agriculture is inherently a logical and safe place for queer people because it’s a place where we can enact and practice our queer values,” Mossberg told Bitch Media in 2015. “For me, my queer values are that I’m anti-capitalist and anti-authoritarian too, and engaging in farming is another beautiful way to do that.”

“A good portion of our customer base is queer and I think they support our business because they know we are queer,” Mossberg told the Reformer.

For him, farming is activism, he said.

“This is how I take care of and contribute to my community.”

Mossberg said building partnerships with other food producers in southern Vermont is another way of building a sustainable food production system.

Last year, he worked with Wild Carrot Farm in Brattleboro, supplying 20 shares for the CSA operated by Jesse Kayan and Caitlin Burlett.

“I have known Jonah for eight years and Emily for five in capacities ranging from landlord/tenant, employee, co-worker, friend and colleague,” said Kayan. “They are principled, driven, innovative, and capable. They are kind and flexible and generous. They grow high quality food with the highest environmental practices. If anyone can make a farm work in this community it is them.”

Despite their partnership with Wild Carrot, if Mossberg and Hartz can’t find a plot of land soon, they might have to suspend operations at the end of this year. Even more heartbreaking, said Mossberg, would be having to give up on the CSA altogether.

“We’re going to lose queer farmers like myself and other folks from other marginalized communities who bring a lot of their lived experiences to farming, helping to create a more just, equitable and vibrant food system.”

Mossberg said they have worked hard to find a place in Guilford.

“I feel we’ve asked every person we could to find land. We’ve even written letters and knocked on doors.”

He said they would consider a long-term lease somewhere, but only under one scenario.

“Which is if we were able to have a lifetime lease through some kind of land trust situation,” he said.

Anna Klein of the Neighborhood Roots Food Collective, a Guilford organization that helps support people and local farmers, said they have been working with Mossberg and Hartz to identify a suitable location in town.

“We’re doing what we can to spread the word and connect with local landowners to find opportunities, but it’s very frustrating and complicated, and I wish we could be more helpful,” she said.

What Mossberg is doing is valuable for a community like Guilford, said Klein.

“If we truly value local agriculture, we need to reintegrate and reprioritize agriculture in our communities in a real way, and this includes making sure that there is land available and accessible to them here,” she said. “Growing more of our food locally increases our regional food security, strengthens our local economy, and helps us to feel more connected to our neighbors and to the food we eat. And, just like many of the problematic issues in our society today and in our history, it very often comes down to land and who is in control of it.”

Hatton said, in general, properties in Windham County are being snapped up as soon as they are listed. In Brattleboro, according to data available from the Vermont Association of Realtors, the median number of days a property is on the market has been as low as 42 days last July. In January of this year, the median was 96 days.

But Hatton said that number is not really reflective of how quickly properties are being purchased.

“Practically and functionally, especially in Brattleboro and Windham County, stuff is moving much quicker than that,” he said. “Unless it’s really overpriced or is in bad shape, a property goes under contract almost immediately with multiple offers pushing price up. We have a lack of real estate inventory, but we have very strong demand, from out of state and local.”

Hatton said he’s seen an uptick in the number of out-of-staters buying property in Vermont, but that’s an increase in a trend that has been going of for years.

“It’s a challenge for everybody,” said Hatton. “Especially buyers, who need to be on top of new listings, checking daily.”