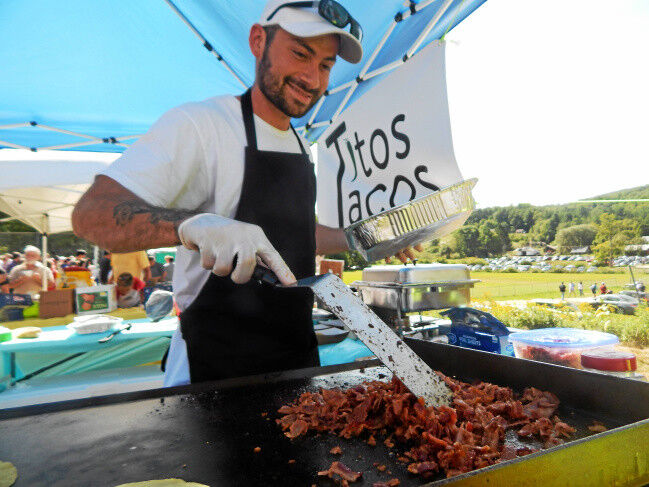 Tito Garza of Tito's Tacos prepares chicken and bacon tacos served with a chipotle lime seasoning and jack and cheddar mix at BaconFest 2016 on Saturday. 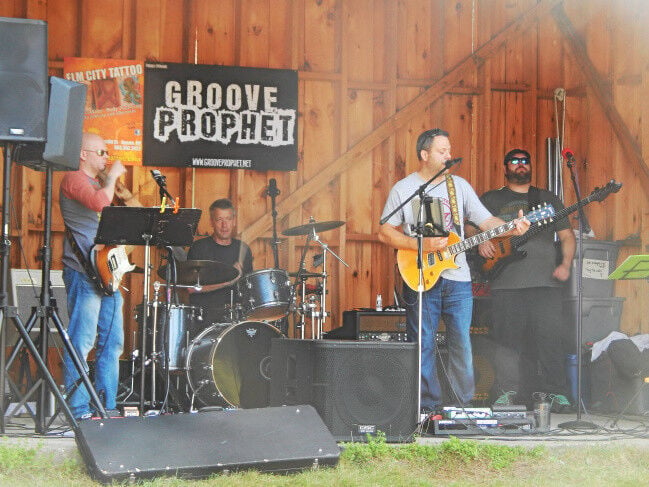 Groove Prophet performs at the Guiford Fairground on Saturday for BaconFest 2016. 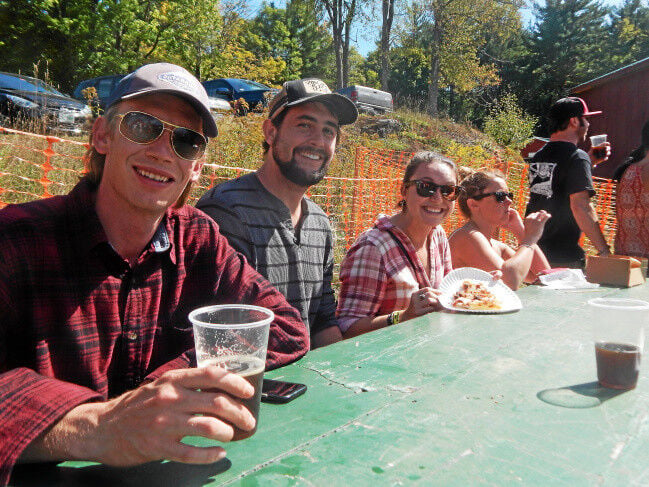 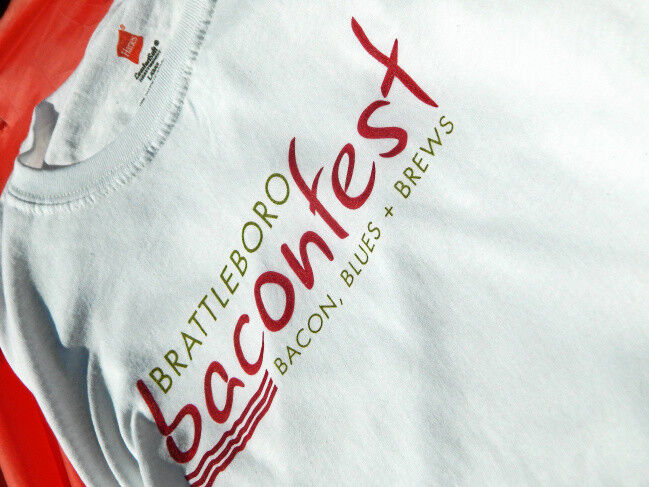 BaconFest t-shirt at the merchandise table.

Tito Garza of Tito's Tacos prepares chicken and bacon tacos served with a chipotle lime seasoning and jack and cheddar mix at BaconFest 2016 on Saturday.

Groove Prophet performs at the Guiford Fairground on Saturday for BaconFest 2016.

BaconFest t-shirt at the merchandise table.

GUILFORD — Thousands of people came out for the third annual BaconFest on Saturday afternoon and some of the event coordinators attribute the successful turnout to a tweet made by American actor and musician, Kevin Bacon.

Since June, WKVT Radio and the Brattleboro Area Chamber of Commerce, the co-hosts of BaconFest, made efforts on social media to get Bacon to attend this annual event that celebrates the cured meat. While Bacon sent his regrets for not being able to make the event, thousands of locals and out-of-staters strolled through Windham County to make it over to the Guilford Fairgrounds for some live music, bacon tastings, good company and other fun activities.

"This year we've had a lot more (people), we've definitely broken some attendance records here and I think we got a lot of social media with trying to bring Kevin Bacon here, that was big," said Peter Case, operations manager at WKVT,

Kate O'Connor, executive director of the chamber, came up with the idea to try and bring Bacon to the festival. Representatives from WKVT and BCC started filming people from the area and tweeted out to Bacon, requesting his presence at the event.

This was the third year that WKVT and the chamber have sponsored BaconFest — "Bacon, Blues, and Beers" — which ran from 11 a.m. to 4 p.m. at the Guilford Fairgrounds. People lined up for different samples, including house brewed favorites from the Whetstone Station in Brattleboro, such as a drink called the Smoke and a Pancake, inspired by a Austin Powers movie, as well as the restaurant's flagship beer, the Whetstoner.

"People love the sweet and salty flavors of it, the smokiness of the bacon, so we really try to make a beer that mimics that," said Matt Salinsky, a bartender from the Whetstone Station. "Adding the bacon started a few years ago at the first BaconFest and we had a Bacon Porter and it's really taken off from there."

A group of local graduate students who are all originally from out of state, said the bacon, beer and blues brought them out to the event on Saturday. The group of friends sat together at the festival, enjoying each other's company and some tasty treats.

"It kind of reminds me of home a little bit and the fact that there's bacon makes me feel like I died and went to heaven," said event attendee Jon Talbot, who ate some bacon pizza, bacon wrapped pate, bacon jam, a bacon barbecue sauce and a maple bacon beer.

While some people's love for the treat was apparent in the samples they ate, others chose to take their affection a step further. Zachary Beaudet, 13, of Middleboro, Mass., showed up to BaconFest 2016 in a bacon costume.

"We went trick-or-treating one Halloween, and I love bacon so we decided to find a bacon costume," said Beaudet.

And lucky for Beaudet, this weekend was another chance for him to show off his beloved costume. When the Reformer asked Beaudet what it is about bacon that he loves, he responded, "everything I guess, I don't know, I can't resist it, it's too good."

At the fairgrounds there was a 5K and 10K race, the "Hog Jog," which was sponsored by the Brattleboro Area Chamber of Commerce. It began on Weatherhead Hollow Road in Guilford. "Golden Hog" trophies were presented to the top three male and female winners in each race. All runners also received an "I Run For Bacon" T-shirt.

When people were not racing, eating or chatting, they may have also been enjoying the live music by the local rock and roll band, Groove Prophet,