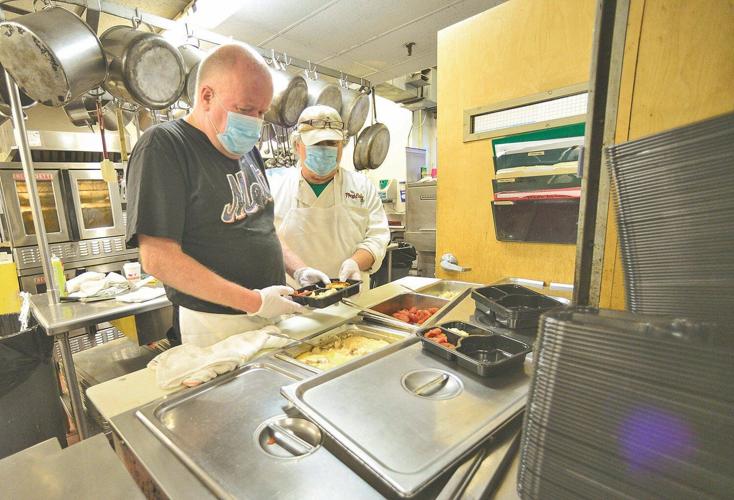 Ray Bronson and Dean Lafayette, left to right, chefs at Brattleboro Senior Meals in Brattleboro, prepare a dish that will be delivered to residents on May 21, 2020. 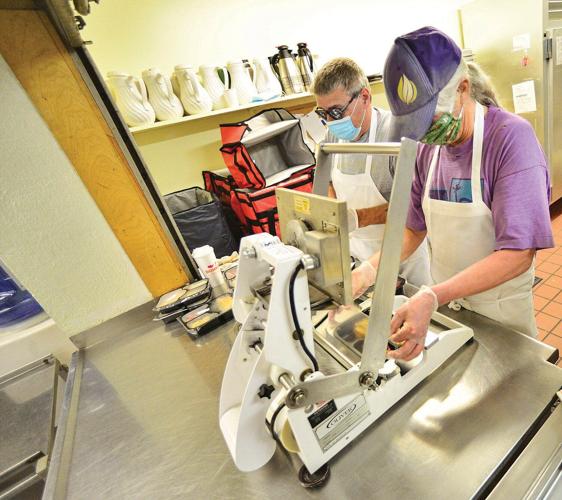 Ray Kellett, kitchen aid for Brattleboro Senior Meals, in Brattleboro, Vt., seals each meal before they are packed to be delivered to residents in the community on Thursday, May 21, 2020. 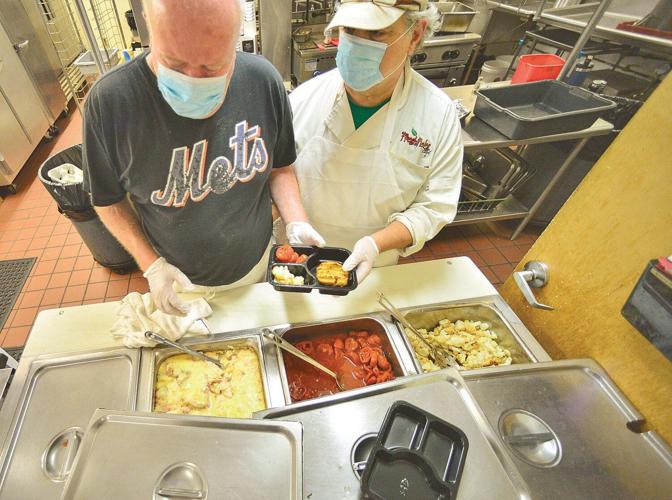 Ray Bronson and Dean Lafayette, left to right, chefs at Brattleboro Senior Meals, in Brattleboro, Vt., prepare a dish that will be delivered to residents in the community on Thursday, May 21, 2020 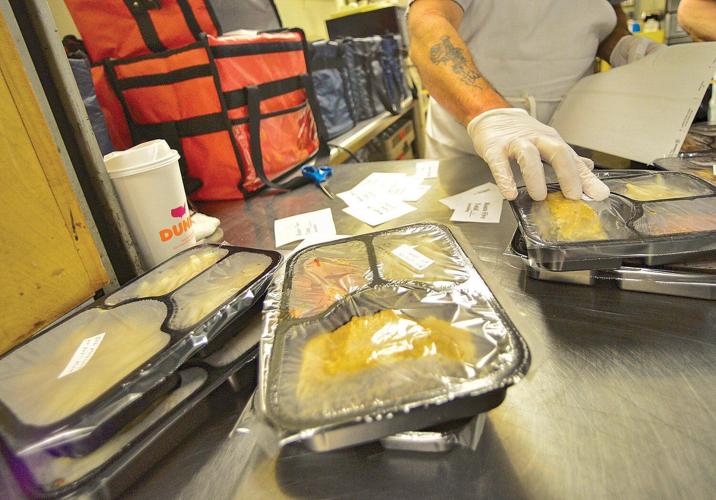 Gino Butler, packer and driver for Brattleboro Senior Meals, in Brattleboro, Vt., gets the meals in order before packing them to be delivered to residents in the community on Thursday, May 21, 2020.

Ray Bronson and Dean Lafayette, left to right, chefs at Brattleboro Senior Meals in Brattleboro, prepare a dish that will be delivered to residents on May 21, 2020.

Ray Kellett, kitchen aid for Brattleboro Senior Meals, in Brattleboro, Vt., seals each meal before they are packed to be delivered to residents in the community on Thursday, May 21, 2020.

Ray Bronson and Dean Lafayette, left to right, chefs at Brattleboro Senior Meals, in Brattleboro, Vt., prepare a dish that will be delivered to residents in the community on Thursday, May 21, 2020

Gino Butler, packer and driver for Brattleboro Senior Meals, in Brattleboro, Vt., gets the meals in order before packing them to be delivered to residents in the community on Thursday, May 21, 2020.

BRATTLEBORO — Chris McAvoy, executive director of Brattleboro Senior Meals, has never seen so many requests for Meals on Wheels in her 22 years with the organization.

"I've had to change some of my meal routes so they aren't so large and add a couple of more," she said.

Eligibility requirements for Meals on Wheels were loosened for the coronavirus pandemic. Usually, meal deliveries can be arranged for those who are homebound and cannot prepare their own meals or have some issue affecting activities of daily life. But now, the federal government also allows anyone older than 60 who has chosen to self isolate to receive the meals as well as other household members.

McAvoy's group went from having nine routes to 11, with the longest reaching 22 people and the shortest serving seven. On average, each route serves 15 to 16 people. Two extra frozen meals are provided on Fridays to help through the weekends.

Prior to the pandemic, the group served nearly 600 meals a week. For the week of May 4, 825 meals went out to residences in Brattleboro, Dummerston, Guilford and Marlboro. Another approximately 100 meals are served take-out style from the senior center each week.

McAvoy said she has "streamlined things" to ensure the safety of kitchen staff, volunteer drivers and meal recipients.

Meals are prepared in the kitchen and lined up outside the Brattleboro Senior Center. Drivers are instructed to wear gloves and masks, knock on the door of the recipients and leave the meal to keep at least 6 feet of distance.

"That doesn't always work," McAvoy said. "Some of the seniors have the door open and are waiting for the meal."

Most of the drivers have volunteered with her group for a long time but about four or five are helping as substitutes, McAvoy said, describing them all as "great."

"The cooks are doing a wonderful job," she added. "They haven't had any issues getting food in here at least not to my knowledge."

McAvoy expects to be getting more federal funds to help with the recognition that her group has stopped hosting congregant meals at the senior center, where donations tend to be a little higher. The group also received grants from the Vermont Community Foundation and Vermont Foodbank to help during the pandemic.

Teagan Kosut, director of Bellows Falls Area Senior Center, said her group has "pretty much doubled" its Meals on Wheels deliveries since the center was shut down in mid March. Each day, about 80 meals are going out.

"We have a really incredible core of volunteer drivers who haven't changed since the shutdown who continue to come in," Kosut said. "We're really fortunate that's worked out beautifully."

She said one additional kitchen staff member was hired.

"We found our groove and things are working really well," she said.

Kosut also is waiting on federal funding to cover the cost of increasing the number of meals. She described the waiting period to be a "little nerve wracking."

Wendi Germain, nutrition and wellness director for Senior Solutions, said the number of Meals on Wheels deliveries has increased in her service area of Windham and Windsor counties. But the jump is not as big as her group anticipated.

"I'm not sure if it's just people not knowing we're still out there and people are still delivering meals or maybe that it's so many other supplemental food programs happening that folks just haven't needed the meals," Germain said.

Her group expected to see an approximately 60 percent increase. Germain estimates that it is probably closer to 20 or 25 percent.

According to a Meals on Wheels America survey, nearly all programs across the United States have experienced increased demand. The national group said four in five programs reported that new meal requests have doubled since March 1 when concerns about the virus brought about major changes to daily life.

Senior Solutions reimburses local Meals on Wheels sites with $3 or $4 for each meal using federal funds. Germain said the average meal costs between $10 and $11 so sites have to raise funds to cover the rest.

To help through the pandemic, sites will be getting "temporary funds" to cover the increase in meals and additional hours workers have taken on. The money is coming from the Families First Coronavirus Response Act and the Coronavirus Aid, Relief and Economic Security or CARES Act.

Germain started the job two weeks before the pandemic hit.

"I'm just blown away by the programs and how they've busted their tails," she said.

"That has a huge positive impact on people that have trouble getting to the stores or many of the folks we work with are afraid to go to the store and come in contact with people who are sick or may be sick," she said. "It's a very interesting time. In the beginning, it seemed awful and we'd never get through it. But two months later, it starts to feel like a new normal."

Strong recently participated in on a phone call with representatives of senior meal sites from around the state about what reopenings might look like. Her group serves Ludlow, Cavendish and Plymouth.

When the pandemic first hit, Strong wondered how she would get enough volunteer drivers to deliver the meals.

"We didn't see that huge increase, however, I reached out for volunteers and we got some really great volunteers that we were able to use," she said. "That was a real positive. People just really seemed to want to help do whatever they can."

Recipients of the weekend meals were "really grateful for it," she said, noting that "the weekends can get long."

"I'm thinking because they've done a really good job, it wasn't as devastating for people as it could have been," she said.