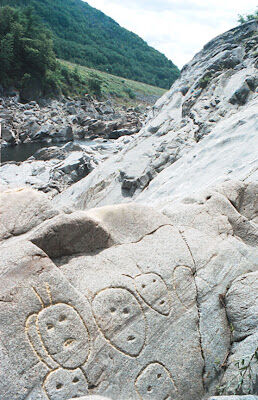 Rockingham Library hosted an online program about the petroglyphs at the Great Falls, on Wednesday. 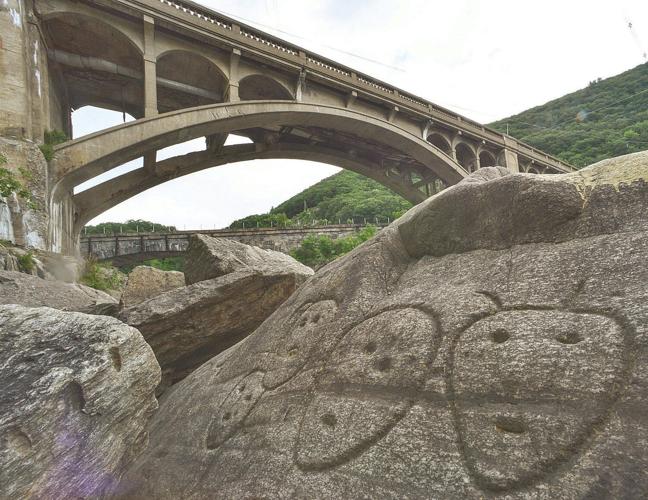 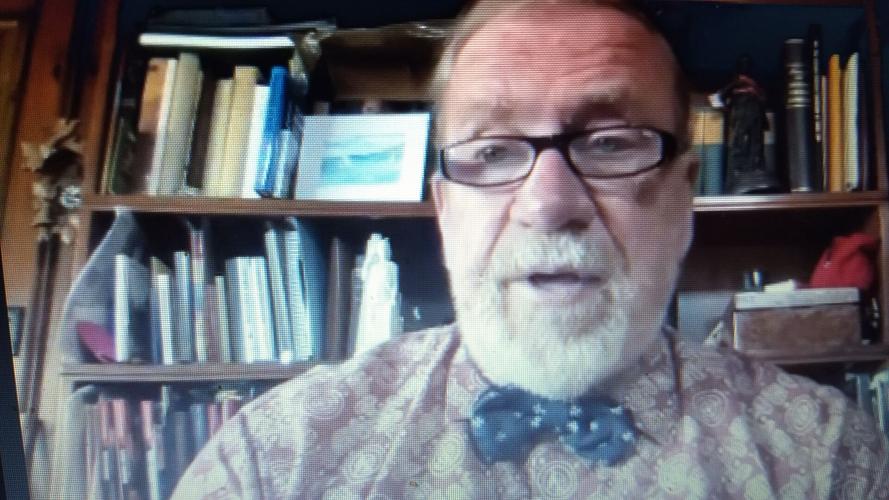 Rockingham Library hosted an online program about the petroglyphs at the Great Falls, on Wednesday.

BELLOWS FALLS — The petroglyphs at the Great Falls, known by the Abenaki as Kchi Pontekw, are likely 300 to 400 years old, and resemble other petroglyphs in different parts of North America, a retired Missouri college professor said Wednesday.

He said he assumed that the Bellows Falls petroglyphs were “only 300 to 400 years old, or even less,” and he citied a similar site in Ohio for his guess, and the discovery of a stone chisel that would have been used to carve in the rock in a Indigenous burial site in Missouri, with pottery that dated 1,000 years old.

“I can’t speak for the Abenaki,” he said.

Walter Wallace, the town’s historic preservation coordinator, said that Abenaki tradition put the age of the petroglyphs at about 1,000 years.

Fuller said he had new insights into the meaning and history of the Bellows Falls petroglyphs, which along with a single and similar one in Brattleboro at the confluence of the Connecticut and West rivers, are the only known petroglyphs in Vermont.

He said he believed the petroglyphs showed “friendly spirits, maybe associated with fish and beaver.”

And he said dotted decorations, which appear below one of the larger Bellows Falls faces, looked similar to decorations that appear on petroglyphs on Dighton Rock in Massachusetts.

He compared them to elk teeth, which were used to decorate garments by successful Indigenous hunters.

Fuller visited the Bellows Falls petroglyphs in 2014 and said he believed the petroglyphs, which he called “rock art,” were celebratory — related to the catching of fish at the Great Falls or the hunting of beaver along the river. (Abenaki generally reject the description of the petroglyphs as “art,” saying they are sacred symbols in their culture.)

Fuller said some of the Bellows Falls petroglyphs, which are mostly groups of circles with two eyes and a mouth, had horns or antlers on them, which designated them as male, in his opinion, as Fuller described himself as “an old white male folklorist.”

“They are not feathers,” he said.

And Fuller said that the re-cutting of the timeworn petroglyphs, which was done around 1930 in Bellows Falls, could make dating difficult. Other estimates have been that the petroglyphs are anywhere from 1,000 to 3,000 years old, significantly pre-dating European settlers.

Fuller said the recutting of the petroglyphs was “regrettable,” and nothing a professional archaeologist would do or recommend. But he said as far as he could tell, the purpose was to draw attention to the petroglyphs and make sure people could see them, and was not malicious.

He said the petroglyphs that weren’t recut, are actually quite faint because of erosion from the Connecticut River, and hard to see.

In addition to being re-cut, some of the petroglyphs have been outlined in yellow paint. “I know this is distressing,” he told the gathering.

He said that in Norway and Sweden, the community repaints their petroglyphs repeatedly with red paint to make sure they don’t fade from sight.

“It’s always been red. Red stands for life,” he said.

In Missouri, state park rangers have recut petroglyphs. “It breaks my heart,” he said.

In Ohio, he said, people on a boat trip on Ohio River discovered petroglyphs and chalked them.

Fuller said he had found petroglyphs in Puerto Rico and St. Kitts, and St. John in the U.S. Virgin Islands. He said they showed “a shared distant ancestry” to the Vermont petroglyphs.

Larry Clark of the Bellows Falls Historical Society told the group of about 60 people who attended the virtual lecture that he had found a newspaper clipping from the old Bellows Falls Times on June 26, 1930, that refers to the re-cutting of the petroglyphs, which at the time were called “the Indian heads.”

Clark, reading from the news clipping, said the local chapter of the Daughters of the American Revolution had paid for the re-cutting “at great expense,” shortly before their convention in 1930.

The town of Rockingham recently received a federal grant from the National Park Service to study and re-evaluate the significance of the Bellows Falls petroglyphs. While the petroglyphs are currently included in the downtown Bellows Falls National Register of Historic Places description, the new study will allow the petroglyphs to be placed in a more contextual landscape, Wallace said.