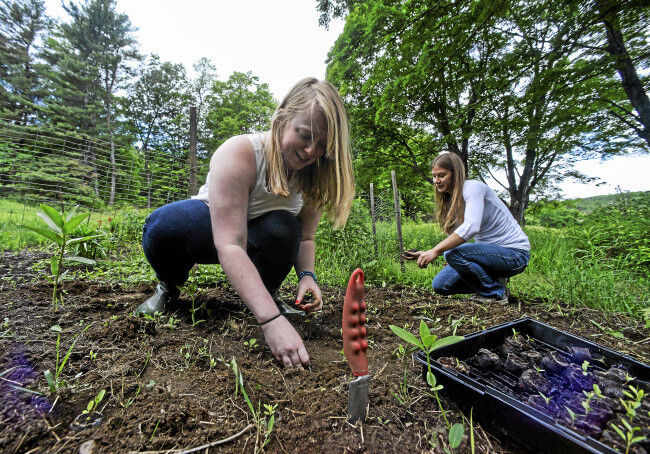 Meagan Fulton, left, and Nina Markiw, right, of Vermont Woods Studios in Vernon, plant milkweed to help grow the population of Monarch butterflies next to a garden on the property. 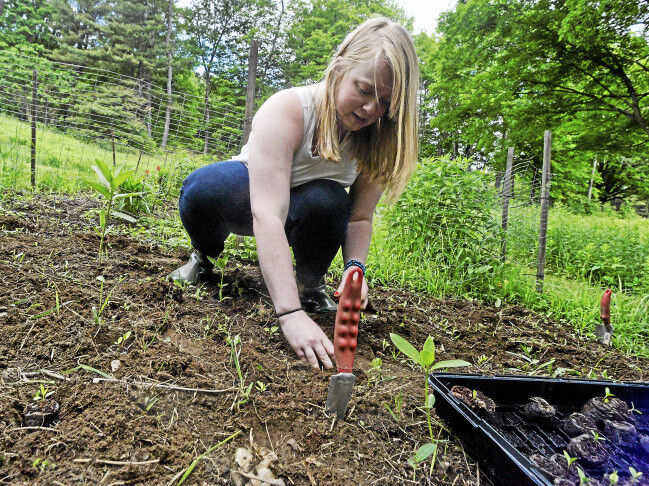 Meagan Fulton, of Vermont Woods Studios in Vernon, plants milkweed to help grow the population of Monarch butterflies next to a garden on the property.

Meagan Fulton, left, and Nina Markiw, right, of Vermont Woods Studios in Vernon, plant milkweed to help grow the population of Monarch butterflies next to a garden on the property.

Meagan Fulton, of Vermont Woods Studios in Vernon, plants milkweed to help grow the population of Monarch butterflies next to a garden on the property.

VERNON >> The creatures that soar in the air, displaying their orange, black and white patterned wings known as the Monarch butterfly, are now few and far between in Vermont.

The Monarch population has dropped 90 percent in North America and Mexico according to Peggy Farabaugh, founder of Vermont Wood Studios. The monarchs cannot survive without milkweed plants. As caterpillars they only eat milkweed plants and as butterflies, they need milkweed to lay their eggs. Illegal logging has destroyed 75 percent of the winter habitat for the Monarch butterfly and widespread use of herbicides has not helped either, according to Farabaugh, who is making efforts to bring back the Monarch habitats by growing milkweed. Staff of Vermont Woods Studios Monarch Butterfly Project have asked people to plant milkweed in their gardens and have have also hosted parties where they give away seedlings for free.

"They are a beautiful, natural part of our environment and it may just be a bug to some people, but if we lose the Monarch, we're losing a lot of other pollinators too," said Farabaugh. "To me it's about the beauty of the environment, but to everybody including me it's about food because if there are no pollinators to pollinate, we're not going to have anything to eat, we won't have any fruit or vegetables."

Farabaugh said she longs for the environment to be healthy again as it was when she was a child. She notes that in Vermont there are not many signs that the environment is degrading, but the signals are "subtle."

"If you don't pay attention when they're subtle, it might be to late by the time you wise-up."

Farabaugh and her team are hosting a first-ever, "Save the Monarchs Tour" with Jose Luis Alvarez, which will educate people about the declining Monarch population and need for action. Farabaugh met Alvarez when she was visiting Mexico as they share a passion for the monarchs. Alvarez is founder of the La Cruz Habitat Protection Program, which focuses on the issue of deforestation that affects important ecosystems. By the end of the 2012 planting season, LCHPP has planted over six million organically grown pine and other native tree seedlings. The kick-off event for this tour begins Thursday, Aug. 25, at the Vermont Wood Studios and the tour continues through Sept. 3, where they will end at the Smithsonian Natural History Museum. For more details on dates of the tour visit, vermontwoodsstudios.com/monarchs#monarchTour.

In September, the Monarchs migrate from the United States and southern Canada (east of the Rockies) to Mexico. Farabaugh went down to Michoacan, Mexico, in March 2016 because she wanted to see the butterflies in their winter habitat. She said it was an "incredible" sight to see thousands of the Monarchs huddling on the branches of oyamel trees. Their habitat is just a four-hour drive from Mexico City, where Farabaugh says there is a huge demand for wood, and as a result, illegal logging continues to take place. According to Farabaugh, it would be difficult to prevent this illegal logging, or the government corruption that protects it, so instead, Alvarez takes action by planting native tree seedlings to protect the Monarch population.

"He's like the Johnny Appleseed of evergreen trees,"said Farabaugh. "His strategy is to keep the local people — who have a birthright to have wood — out of the few remaining oyamel trees and give them some wood they can harvest," said Farabaugh.

During this tour, Alvarez hopes to educate others about the declining population of the monarchs and rally donations for LCHPP, which will help his efforts in planting more trees in Mexico.

According to Farabugh, this is the time to plant milkweed seeds to help protect the Monarchs. She also says Vermonters can be a solution the problem by either planting milkweed in their gardens of by not mowing their lawns or fields where milkweed grows, especially in August and halfway through September when the Monarchs lay their eggs. Farabugh said she would like to persuade road crews not to mow for this reason as well.

People can learn more about the Save the Monarchs Tour with Jose Luis Alvarez by emailing Megan Fulton, the Vermont Wood Studios Marketing Coordinator at megan@vermontwoodsstudios.com. Others who have milkweed seeds or interest in Monarchs can request to join the Facebook group called, "Vermont Woods Studios Monarch Butterfly Project." According to Fulton this group is a way for people to connect about their milkweed planting and read about other people's experiences with monarchs.