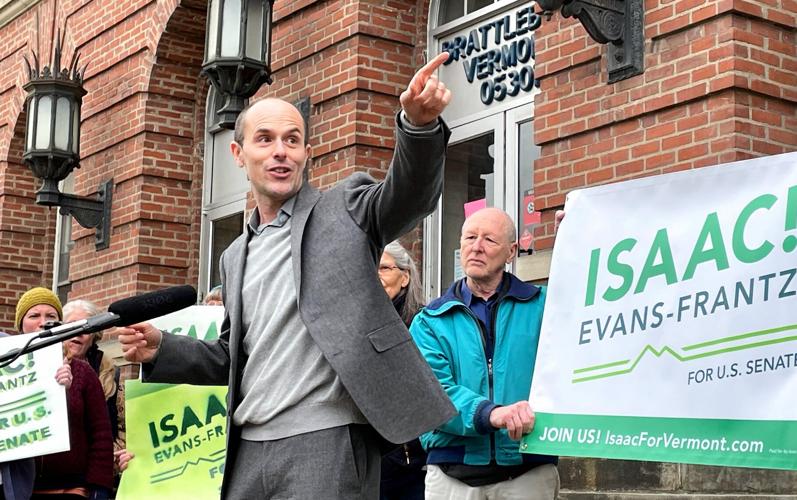 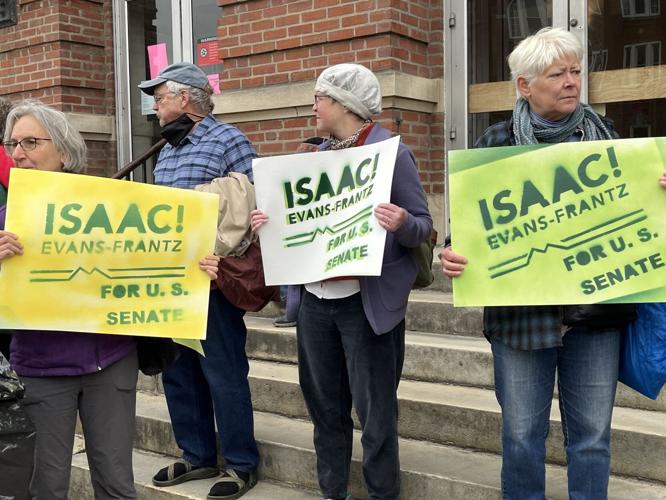 Supporters of U.S. Senate candidate Isaac Evans-Frantz attend a campaign kick-off event in front of the Post Office in downtown Brattleboro on Tuesday. 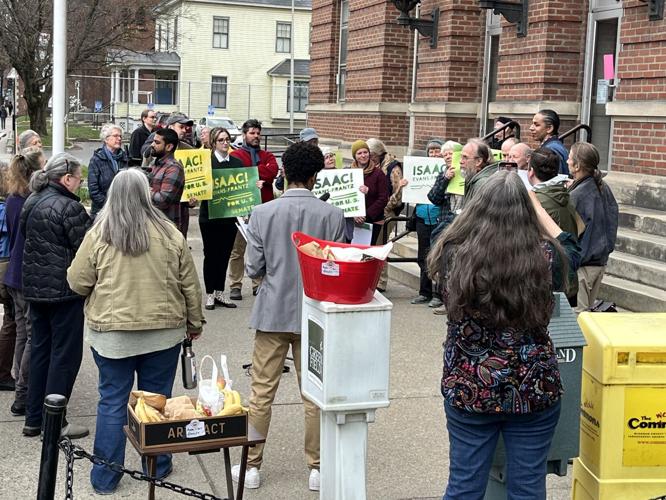 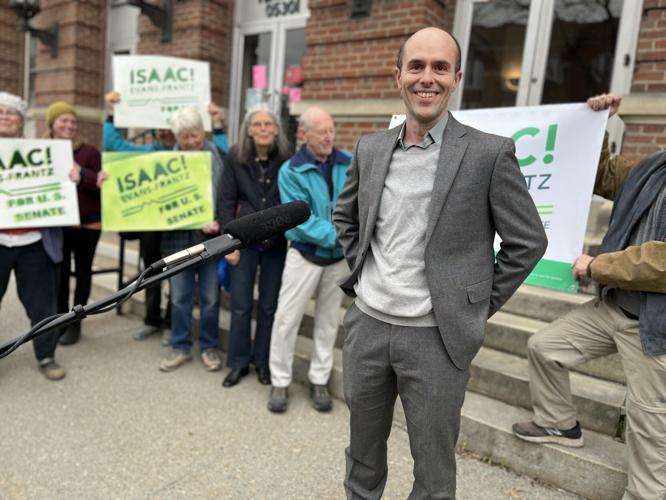 Supporters of U.S. Senate candidate Isaac Evans-Frantz attend a campaign kick-off event in front of the Post Office in downtown Brattleboro on Tuesday.

BRATTLEBORO — Isaac Evans-Frantz is touting his experience in bringing people together as he looks to become Vermont’s next U.S. senator.

“The urgency of the challenges facing our state and humanity right now, I think, demand a leader who is going to stand up and speak out,” he said. “I think that we need a leader who’s going to stand up with courage and who will lead from the start, and before things are popular, not just when it’s politically convenient, not just for our political career, but from the beginning.”

Seeking the U.S. Senate seat being vacated by Patrick Leahy, D-Vt, Evans-Frantz, 39, plans to run in the Democratic primary in August. He described being new to being involved in the party but having participated in political activism for more than 20 years, and he credited community members in Brattleboro for inspiring him to take an interest in helping to shape society from an early age.

In 2000, Evans-Frantz became the first student appointed to be a voting member on the Vermont State Board of Education. He recounted leading a group of students statewide in calling for having representation on the board since it makes decisions affecting their lives: they traveled around and testified in the Vermont House of Representatives and Senate, ultimately gaining the support of former Gov. Howard Dean.

It wasn’t the first time Evans-Frantz got involved in political organizing. He led an initiative to provide support for LGBTQ youth in high schools and the group held a conference in Brattleboro.

Also as a student, Evans-Frantz organized a door-to-door campaign for U.S. Sen. Bernie Sanders, I-Vt. He recalled vacuuming Sanders’ floor at an office on Elliot Street in Brattleboro when he was in second grade but couldn’t remember how he got involved in campaigning.

“I don’t know how I got into it,” Evans-Frantz said. “But I was excited about his message about health care and education and our society, where we care for all we take care of one another, and a world where we invest in people rather than war.”

Evans-Frantz said he’ll fight to expand the child tax credit, calling it “something that can make life easier for lots of people.”

“Last year, this lifted millions of children out of poverty, just like that,” he said, hoping to return it to the higher level of financial support it had earlier in the COVID-19 pandemic. “I think we have a moral obligation to the next generation. And it’s hard being a parent. A lot of people are telling me that they’re having to quit their jobs in order to take care of their children. They’re paying so much in child care that it’s just not worth it even to work.”

The ability to work remotely during the pandemic allowed Evans-Frantz to return to Vermont with his husband. Evans-Frantz had grown up next to the Bonnyvale Environmental Education Center in West Brattleboro.

When Evans-Frantz left Vermont because he couldn’t find a job, he ended up employed as an educator in schools and in community health centers in New York City. He also helped to build Action Corps, a national human rights advocacy organization that trains activists in 20 states including Vermont. (While campaigning, he has stepped down from being the group’s executive director.)

One of the big goals of Action Corps is to stop the U.S.’s participation in the war in Yemen. The group brought together non-governmental organizations and other human rights organizations, which lobbied lawmakers to pass legislation calling for an end to America’s support.

“When I talked to Vermonters, most Vermonters don’t want the United States to be waging wars around the world,” he said. “You know, we see Ukraine in the news so much and the devastation there, and that’s really upsetting to so many of us here. And to know that the United States is is enabling that sort of crisis in another place is really disturbing to a lot of Vermonters.”

On Ukraine, Evans-Frantz said he believes targeted sanctions are important but he has concerns about broad-based economic sanctions.

“I think there needs to be off ramps,” he said. “I think that it’s really important that we avoid World War III.”

Evans-Frantz said the U.S. should listen to Ukraine President Zelensky in his calls for diplomatic support.

“The United States could be playing a much bigger role in supporting that mission and a diplomatic resolution of this conflict,” he said, viewing the war as a time for the U.S. to reflect on the need to develop energy independence and invest a lot in renewable energy.

To help stop the blockade of Yemen, Evans-Frantz built and co-led a national coalition with more than 20 different organizations. Its work can be seen on every75seconds.org; the website name references how every 75 seconds, a child in Yemen dies from starvation.

On President Biden’s first Monday in office, Evans-Frantz helped organize a global day of action in which he counted 400 organizations from 30 countries supporting a protest against the war on Yemen with tens of thousands participating online and another tens of thousands out in the streets. In Brattleboro, the protest occurred via a car caravan through downtown.

Another national coalition built and led by Evans-Frantz is the Global COVID Response Coalition. He said he was asked to step in on the project because while many were being killed by the virus in the U.S., a lot of people around the world were “dying from the economic impact from the poverty that was being exacerbated by this pandemic, by the economic slowdown.”

“So what we learned, and what we knew was important, was to get massive amounts of resources really quickly to these kinds of countries around the world, specifically in lower income countries,” he said, explaining how the coalition circulated letters to Congress, the Treasury and the U.S. administration with support coming from many organizations before gaining bipartisan support. “What we achieved was global pandemic relief for 190 countries and it was released by the International Monetary Fund in August this past year. And it was the largest relief, like largest amount of funds that was released, no strings attached, just money into the central banks of all these countries.”

Several years ago, graduate research led him to developing an initiative to expand the dental workforce in Vermont by creating a mid-level dental practitioner who can drill and fill cavities or do other basic things.

“It is less expensive than dentists, but can provide just as high quality care for the procedures that they can do,” he said, adding that he’s proud of getting support from lawmakers and the governor via a law. “Vermont became the fourth state in the nation to allow for this new member of the dental workforce.”

Growing up as a gay student in public school in Vermont, Evans-Frantz said he feels more training for educators can help curtail bullying and harassment. He also wants to ensure resources and support services are available for LGBTQ and BIPOC communities.

As a big proponent of the Youth Vote initiative to allow 16- and 17-year-olds to participate in local elections in Brattleboro, Evans-Frantz said he thinks young people bring energy, intelligence, certain skills and unique knowledge to the table. He was disappointed when the governor vetoed a bill supporting the initiative and the Senate decided not to override the veto due to concerns over how those in that age group, if elected as Select Board members, couldn’t sign contracts until they turn 18.

On the federal level, Evans-Frantz wants to ensure voting rights for all people. He sees Vermont as a model for ease and accessibility.

Arianna Jones, Welch’s campaign spokesperson, said Welch has “always worked to deliver for Vermonters and put their interests first. It’s why he received the endorsement of End Citizens United, the leading anti-corruption, ethics reform organization in the country, who said, ‘We know that just as he’s done in the House, he will do everything he can in the Senate to stop the corrupting influence of dark money in politics and ensure Vermont families can make their voices and votes heard in our elections.’”

At a campaign kickoff event Tuesday in front of the Post Office in downtown Brattleboro, Evans-Frantz told a crowd of about 50 people that Welch is doing a decent job “but it’s time to pass the torch to someone in my generation.” Updates on Evans-Frantz’s campaign can be found at IsaacForVermont.com and Facebook, Twitter and Instagram pages with the handle @IsaacForVT.