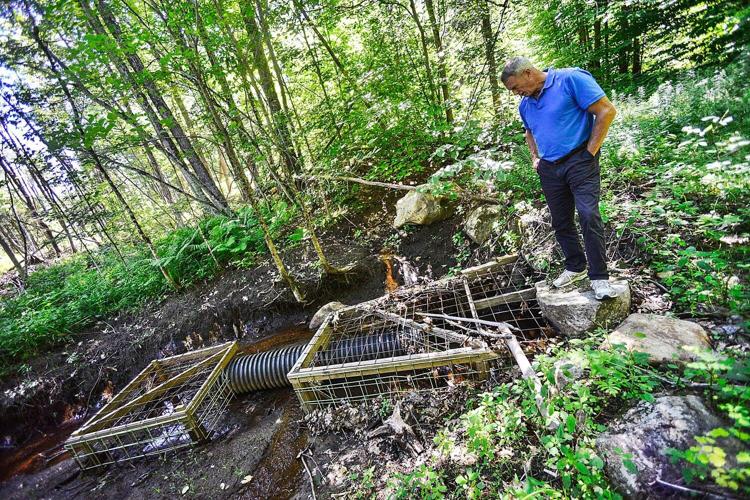 Grafton resident Skip Lisle, a beaver expert, shows off a newer version of his beaver deceiver. 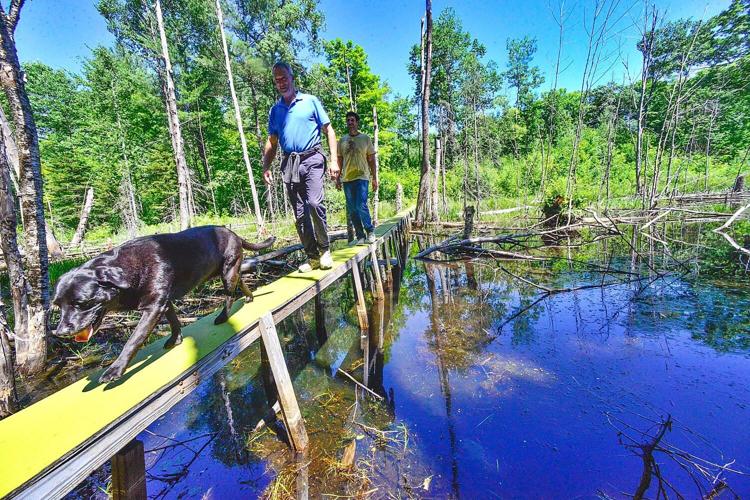 From left, Grafton resident Skip Lisle, a beaver expert, talks with environmental journalist Ben Goldfarb as they cross a makeshift bridge that Lisle created over a wetland he helped restore. 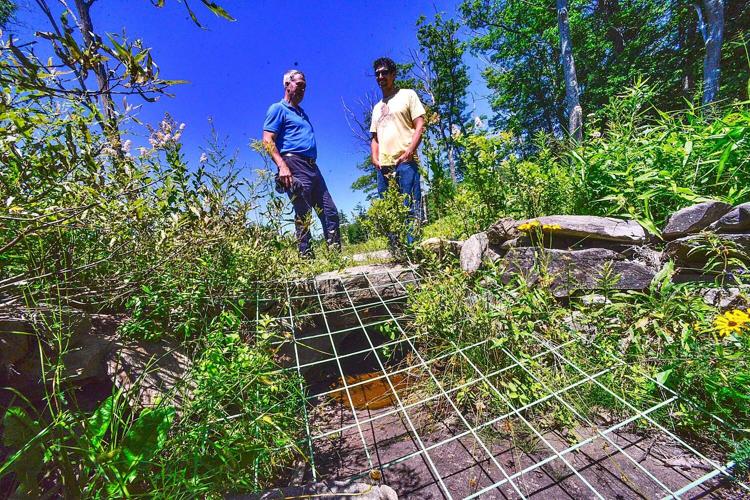 From left, Grafton resident Skip Lisle, a beaver expert, talks with environmental journalist Ben Goldfarb about the original beaver deceiver that he created to help restore wetlands on his property. 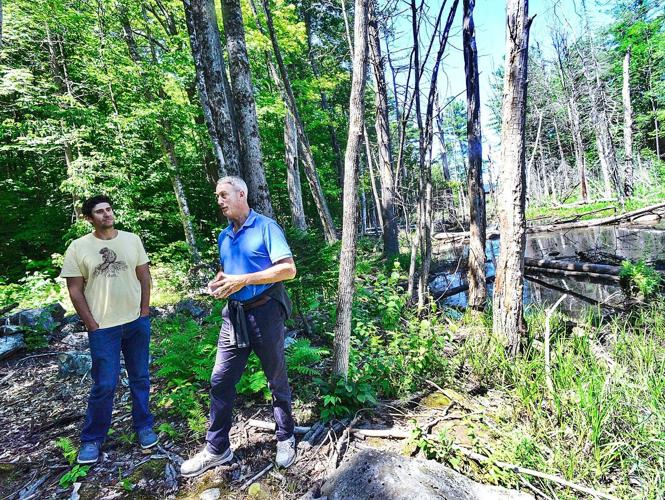 Grafton resident Skip Lisle, a beaver expert, shows off a newer version of his beaver deceiver.

From left, Grafton resident Skip Lisle, a beaver expert, talks with environmental journalist Ben Goldfarb as they cross a makeshift bridge that Lisle created over a wetland he helped restore.

From left, Grafton resident Skip Lisle, a beaver expert, talks with environmental journalist Ben Goldfarb about the original beaver deceiver that he created to help restore wetlands on his property.

Author Ben Goldfarb, whose book "Eager: The Surprising, Secret Life of Beavers and Why They Matter" was published last month by Chelsea Green Press of White River Junction, was in Grafton Friday afternoon to meet up with one of the subjects of his book: Skip Lisle of Grafton and Beaver Deceivers International.

"We want beavers to keep

Lisle earned his place in Goldfarb's book by inventing the anti-trap: a wire and wood device that he calls the 'beaver deceiver' that keeps road culverts free and flowing.

Lisle said when he was a kid, his parents took him to a New Hampshire wildlife zoo to see a beaver.

That certainly isn't the case in 2018, as Lisle's corner of Grafton has a thriving beaver community, and according to Lisle, all forms of wildlife are thriving thanks to the beavers.

The wetland was full of vibrant wildflowers, birds flitted from touch-me-not to touch-me-not, the concentric circles from rising fish dotted the wetland, and countless songbirds flitted constantly. Wood ducks, Canada geese and hooded mergansers also made the large pond home.

Before the beavers, Lisle said, it was a field.

"Now it's just teeming with life," he said, to the plunking of wood frogs and a chorus of birdsong.

"Beaver ponds attract jewelweed, which attracts hummingbirds," said Goldfarb, as hummingbirds buzzed by. Fish also follow the beaver, he said. "The saying is 'beaver taught salmon to jump,'" he said.

A little history: beavers were virtually wiped out of the New England landscape and beyond by fur trappers. In the late 1600s, a quarter million beaver pelts were shipped from the Connecticut River Valley, destined to become fashionable hats in London.

The beaver, which is North America's largest rodent, was re-introduced in Vermont in 1921 when the Vermont Fish & Game Service, the precursor to the Vermont Fish and Wildlife Department, trapped six adult beavers in the Adirondack town of Old Forge and released them in Bennington. While beavers are thriving, they are nowhere near their historic numbers, according to Goldfarb's book.

Lisle, a wildlife biologist by training, said he wishes flow devices would be accepted and put into use to save more beavers.

He said he built his first deceiver out of his father's garden fencing.

He travels all over New England installing the 'deceivers," which are wire contraptions built around culverts or other drainage pipes and which prevent the beavers from damming the culverts. In essence, the 'deceivers' create permanent leaks in a beaver's dam, allowing water to drain at a slow rate and thus avoid the ire of highway engineers and public works directors.

"He's a pretty big figure in the beaver community," Goldfarb said of Lisle.

Goldfarb, an environmental writer whose work has appeared in Mother Jones and Audubon Magazine, as well as High Country News, recently moved from Northhampton, Mass., to Spokane, Wash. He and Lisle acted like old friends. They share a devotion to the sleek, nocturnal mammal and its pivotal role in the environment. Goldfarb, like Lisle, is a 'beaver believer.'

To Lisle and Goldfarb, it is nothing short of murder the practice in which some state highway departments and road foremen trap and kill beavers rather than find a way to co-exist and prevent damage to roads and other infrastructure.

Beavers have played an even more important role out West in creating wetlands and restoring some of the ecological balance, and co-existing with cattle grazing.

Goldfarb was on his way to Manchester for a book signing event at the Northshire Bookstore. He has traveled all over the United States and even to Scotland to research and write his book, which was commissioned by Chelsea Green.

According to the book's editor Michael Metivier, Chelsea Green founder and publisher Margo Baldwin believes strongly in the key role beavers play in the environment and sequestering carbon. So far, people are listening and reading, said Metivier, who said the book was Chelsea Green's bestseller this summer.

"There really wasn't a single-source book about beavers," said Metivier.

Beavers play a key role in landscape regeneration, he said.

Metivier said Chelsea Green chose Goldfarb, a graduate of the Yale School of Forestry and Environmental Studies, because "he loved beavers."

Goldfarb said Lisle invented what he called a "high quality flow device" that keeps streams from being dammed, and property from being inundated.

And while most public concern about beaver and their dams focus on flooding, he said creating wetlands can help absorb floodwaters as well.

Beaver dams do pose flood risks, he said, but they are also "forces of flood mitigation."

"I've been battling this for 25 years," said Lisle, who said he has hopes that Goldfarb's book will open people's eyes to the importance of the beaver.