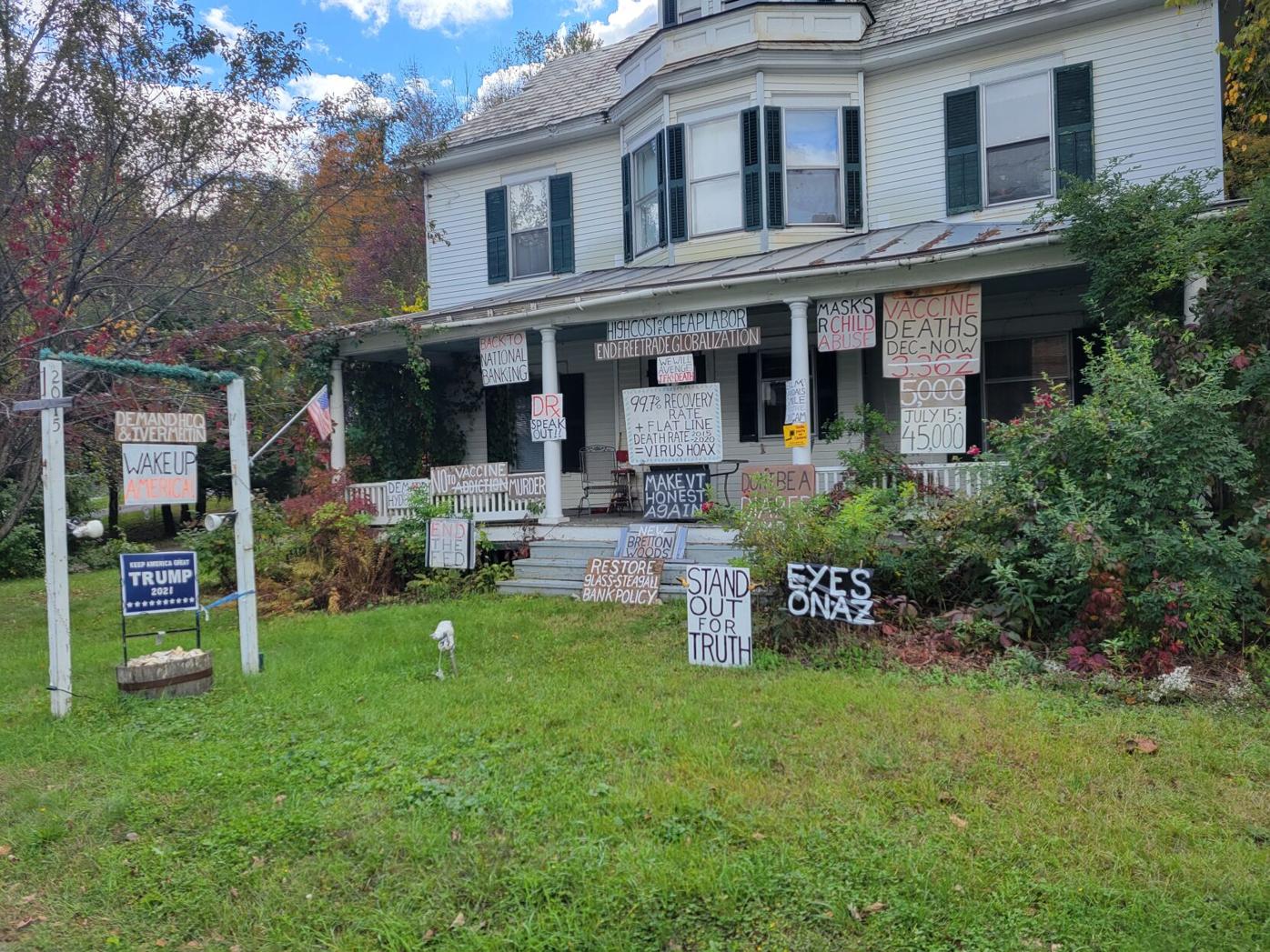 Complaints about a Nazi flag outside this Townshend home landed the matter before the Select Board recently, and it has since issued a statement against symbols of hate. 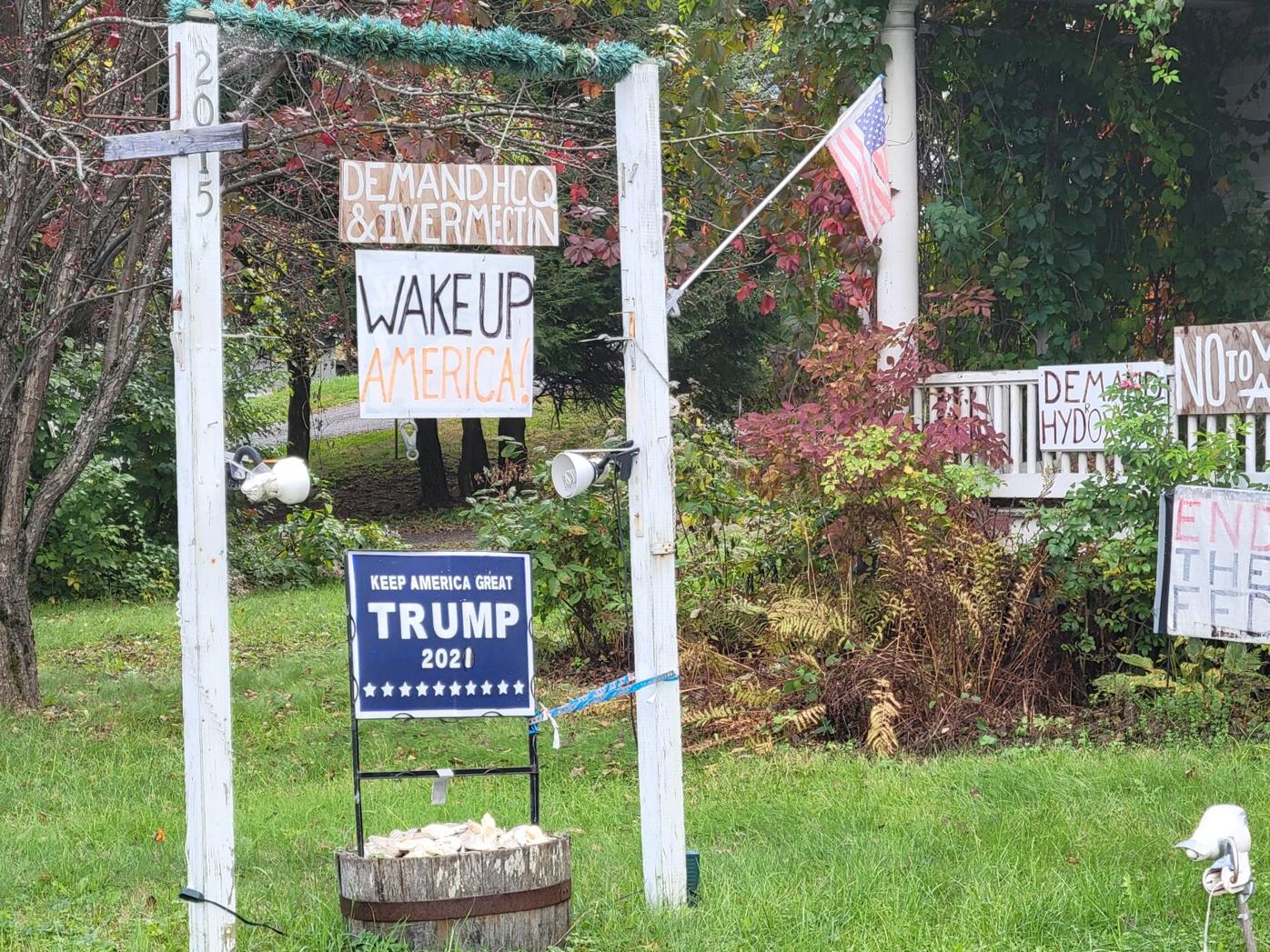 Some of the other banners and flags outside a Townshend home.

Complaints about a Nazi flag outside this Townshend home landed the matter before the Select Board recently, and it has since issued a statement against symbols of hate.

Some of the other banners and flags outside a Townshend home.

TOWNSHEND — An apparent anti-Semitic incident has inspired hundreds of residents of Townshend and Southern Vermont to call on town officials to make a public statement condemning symbols of hate.

Jenny Kessler, of West Townshend, read an open letter to the Select Board on Tuesday night describing the appearance of a Nazi flag flying outside a private residence in the town. According to the letter, the flag’s presence corresponded with the Jewish holiday of Yom Kippur, and came down on Sukkot, which marks the end of Jewish Holidays.

“Flying a swastika during Jewish high holidays equates to intimidation, and it makes our schools and library less safe and welcoming for all,” Kessler read from the letter.

The letter requests that the Townshend Select Board release a public statement, such as, “The town of Townshend values all residents and visitors, no matter their backgrounds or identities. While differences of opinions can be celebrated and debated, we condemn symbols of hate being displayed in our town, in disregard of the welcoming nature of our community as a whole,” an example reads.

Select Board Chairman Sherwood Lake said the next step for the board is to present the petition and other submitted material for review to the town’s attorney.

“My concern is, with a statement, we have to be very careful that we don’t zero in on somebody,” Lake said.

Select Board member Allison Dercoli called mental health the “elephant in the room” when addressing this specific incident in town.

“I would offer all of us to look a little deeper into the mental health part of this, because it’s a very serious thing,” Dercoli said. “Having an unstable person in our community, [who] needs to be seen and is obviously wanting attention, so it’s just something worth noting.”

Keats Dieffenbach, of Marlboro and a member of West River Valley Mutual Aid, said via Zoom that acts of hatred affect all marginalized groups, not just those targeted, and urged the Townshend board to “take decisive action.” The mutual aid group says it consists of neighbors helping neighbors, with a number of ongoing initiatives that address problems like food insecurity and racism.

Dieffenbach was among several individuals who showed up Tuesday night, via Zoom and in person, in support of Kessler’s request. Kessler said her letter has received about 300 signatures from local residents.

Matt Deen, a Townshend resident who appeared in person, said the question is not about whether individuals have First Amendment rights to express offensive ideas, but whether the town will stay silent in the face of a hateful incident.

“We’re very worried about the impact this is having on Jewish folks in particular,” said Deen, while noting that the Nazi flag has been used for generations to harass people of underrepresented communities.

Lyndall Boal, of Brookline, who noted that she gets her medical care at Grace Cottage and was on the board of Leland & Gray, said she was tuning into the meeting to represent the NAACP for Windham County. She said she has already persuaded her hometown Select Board to make a statement similar to the one requested by Kessler’s letter, and said the Townshend schools should also make a statement.

“We cannot tolerate this hate and divisiveness in our county. We need people to move in. We all know that. And this is precluding people feeling safe and comfortable,” Boal said, over Zoom.

Stephan Brandstatter of Brattleboro, over Zoom, said he is a member of a committee against anti-Semitism at his synagogue.

“I support free speech, of course, but that shouldn’t nullify the need for a response that shows a sense of solidarity, if not total solidarity, to what can become cancerous if you don’t at least treat it with something,” he said.

Others expressed support from Brattleboro and Putney. In South Newfane, Juliette Carr appeared via Zoom with two children on the screen. Carr is a co-founder of West River Valley Mutual Aid.

“How Townshend responds to this sort of display really affects how we, as a family, feel in this school district,” Carr said, noting that her family is Jewish. “Overwhelmingly, we feel totally welcome and part of this community, but when something happens like a swastika going up during Yom Kippur across from the schools that my kids are supposed to go to — this is our public schools — that for us, is really concerning.”

Lake said the board will take the next couple of weeks to review all materials related to the incident.

“I don’t think anybody at this table condones anything about what happened,” Lake said. “I want us to be careful that the statement is correct, and it doesn’t violate somebody’s constitutional rights.”