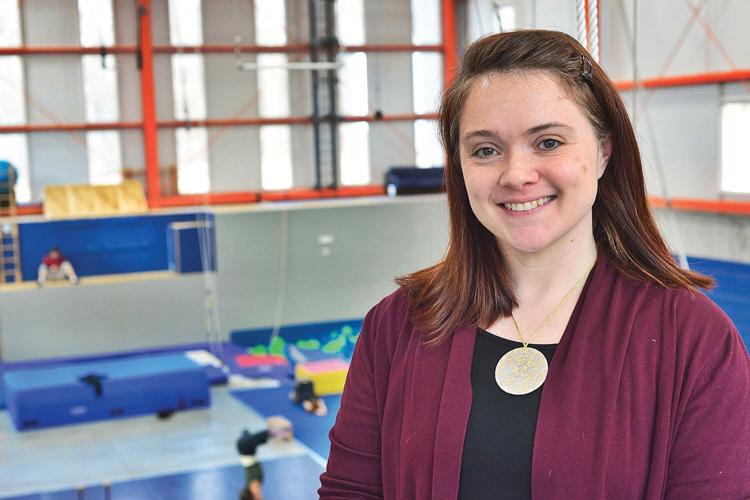 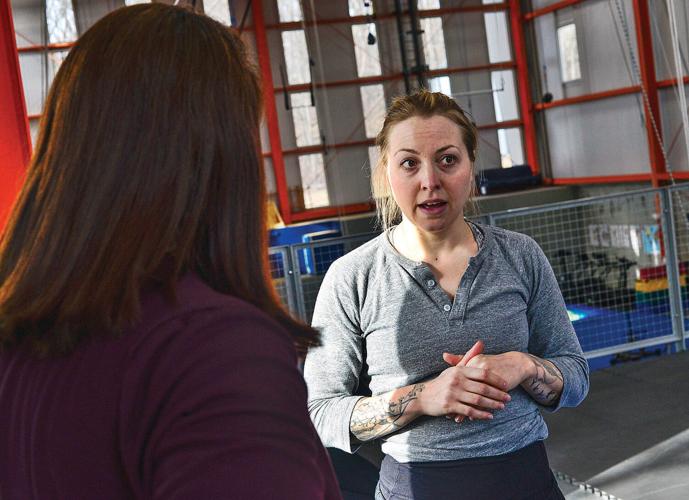 Kalina Suter, who moved to Brattleboro from Switzerland for New England Center for Circus Arts, talks with Jamie Hodgson about her routine for an audition. 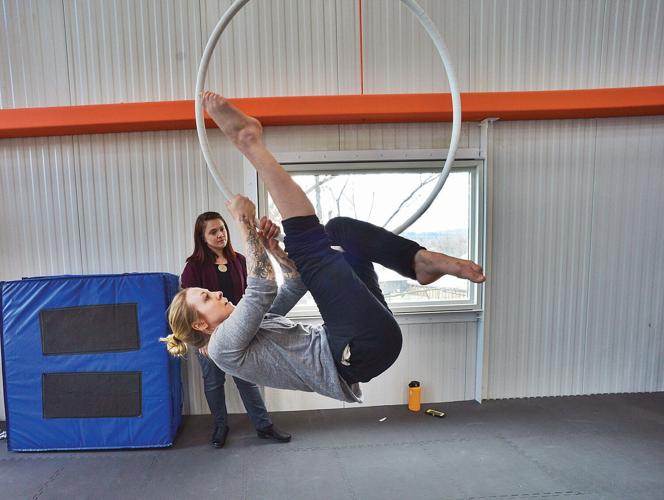 Jamie Hodgson, the new executive director of the New England Center for Circus Arts, helps Kalina Suter practice on the ring on Monday. 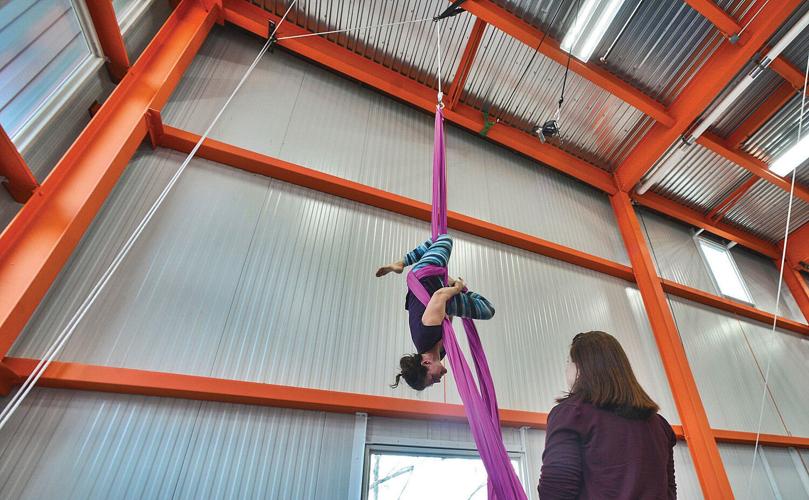 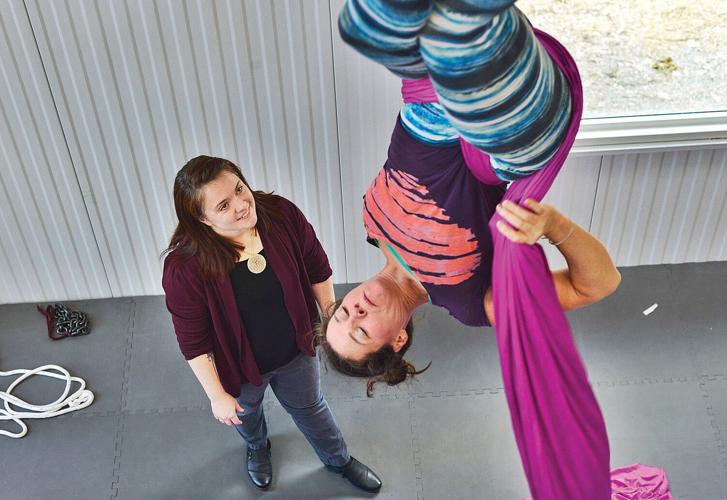 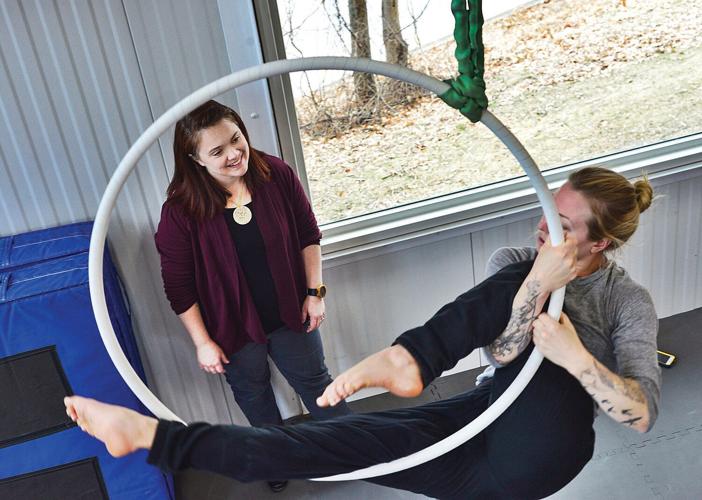 Jamie Hodgson, new executive director of the New England Center for Circus Arts, watches as Kalina Suter practices on the ring on Monday.

Kalina Suter, who moved to Brattleboro from Switzerland for New England Center for Circus Arts, talks with Jamie Hodgson about her routine for an audition.

Jamie Hodgson, the new executive director of the New England Center for Circus Arts, helps Kalina Suter practice on the ring on Monday.

Jamie Hodgson, new executive director of the New England Center for Circus Arts, watches as Kalina Suter practices on the ring on Monday.

BRATTLEBORO — The New England Center for Circus Arts has a new executive director, and she is a familiar face at the trapezium on Putney Road, having been with the organization since its founding.

"We received applications from candidates around the world with a wide variety of expertise and experience," announced Elizabeth Wohl, chair of NECCA's board of directors, to staff and students on Friday, and to audience members at NECCA's Circus Spectacular shows on Saturday and Sunday at the Latchis Theatre.

"In the end, the board's choice of Jamie Hodgson as executive director was unanimous. We have great confidence that she will build on NECCA's strengths as the best professional — and amateur — circus training center in the United States."

For the past seven months, when an organizational shakeup at NECCA nearly brought operations to a standstill, Jeffrey Lewis has served as the interim director. He told the Reformer that Hodgson is the perfect person for the position.

"I can't say enough positive things about Jamie," said Lewis, a former director of the Brattleboro Development Credit Corporation. "I am happy to hand the reins off to someone as capable, committed and knowledgeable as Jamie."

Lewis said on July 18, 2017, he offered Hodgson the position as NECCA's director of operations. "She said 'yes' without hesitation. She's been like that from the beginning. Everything that was put in front of her she took care of and then went out and learned even more on her own."

In July 2017, NECCA experienced a short period of turmoil that resulted in the replacement of its board of directors with a completely new slate of members and the resignation of its former executive director. The new board appointed Lewis on a temporary basis. Lewis then appointed Hodgson as operations director, to manage the day-to-day operations and teaching programs of the school. The founders, who were terminated by the former board, were invited back to NECCA, named as co-artistic directors.

"Serenity and I are really grateful for the methodical and diligent work that the board of directors put into finding the right person to lead NECCA in the next part of our journey," said Elsie Smith. "Jamie has a long-standing connection to the staff, knows circus, and has demonstrated over and over again the perseverance, creativity and vision that NECCA needs in an executive director. We really look forward to working as a team under Jamie's guidance to make NECCA an even better place to work and study, and continue to solidify NECCA's role as a key element in the fabric of the Brattleboro community."

"I am extremely pleased to continue working with Jamie Hodgson as she evolves into NECCA's executive director leadership position," said Serenity Smith Forchion. "Elsie and I have worked alongside her for years, and enjoy our collaborative management relationship. I look forward to continuing the work of growing NECCA together."

Hodgson said she was humbled by the board's unanimous vote.

"We have an amazing board of directors," she said. "I look up to them, and to have their faith ... I am incredibly honored to be selected."

Since July, the staff and board raised $160,000 in donated operational support to stabilize operations, and registrations in nearly all of NECCA's programs, classes and workshops have exceeded goals.

"We want to make sure our existing programs are robust," said Hodgson. "In the national community, we are having a conversation about making sure there continues to be work for our students and making sure there is funding available for grants and for their residencies."

In 2006, Hodgson joined Nimble Arts, founded by Elsie Smith and Serenity Smith Forchion, who would go on to open NECCA two years later. Over the years, Hodgson has helped develop many of the classes being taught there. In 2009, she developed the school's successful Intensive Training Program for aspiring professionals, and led that program until 2017, when she developed and led NECCA's new three-year ProTrack program.

She was founder and artistic director of Girls on Trapeze, which has produced four national tours and won the People's Choice Award at the first International Circus Exposure Festival in New York City. Previously, she traveled internationally performing for corporate events, and she has coached at a variety of circus schools including Circus Smirkus. She holds a bachelor's degree from the University of Connecticut.