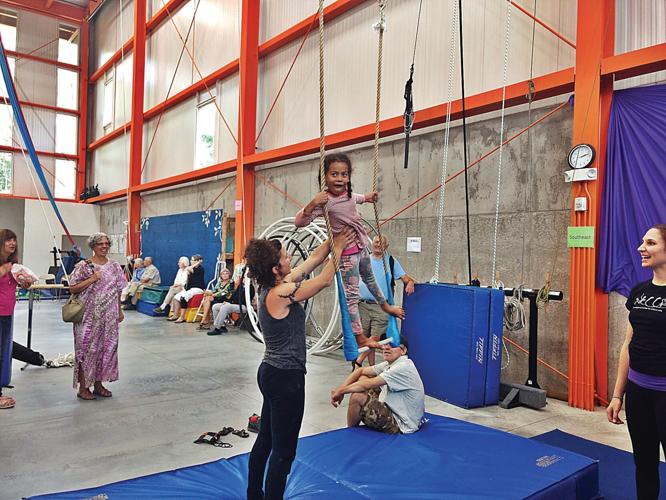 Six-year-old Zawadi Ruthlong tries out a swing with help from a NECCA coach. 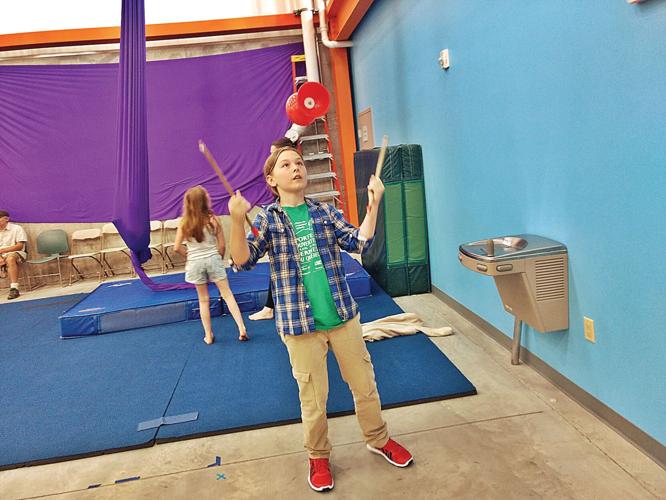 Myles Belove shows off his Diablo skills at the New England Center for Circus Arts. 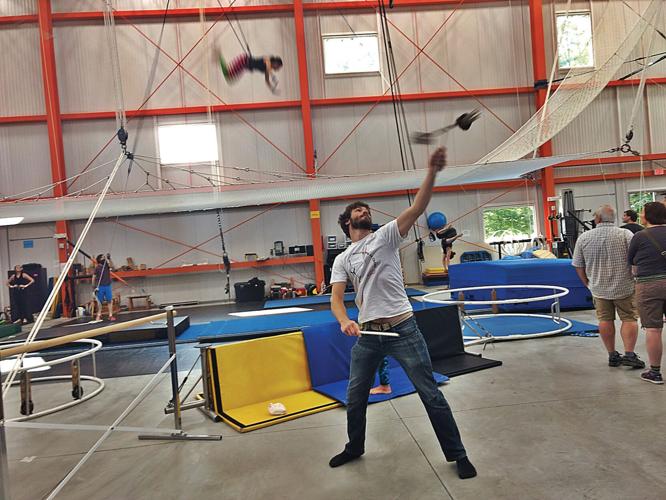 Six-year-old Zawadi Ruthlong tries out a swing with help from a NECCA coach.

Myles Belove shows off his Diablo skills at the New England Center for Circus Arts.

BRATTLEBORO — New England Center for Circus Arts opened its doors Saturday and welcomed in the community for an open house at the organization's new home at 10 Town Crier Drive.

The event had jugglers, flying trapeze, face painting and clowns. People were invited to walk around and explore. They even were allowed to try out some of the equipment, including a brand new trampoline and foam pit, with supervision and assistance from coaches.

The event brought out all types of people.

Dot Lenhart was familiar with NECCA because both her daughter and granddaughter are students.

"I'm here to just enjoy all the different aspects of NECCA," she said. But Lenhart also was looking with interest for herself. She's considering taking one of NECCA's flexibility training courses. She said she suffers from arthritis and is worried her age might inhibit her from participating in the circus arts.

"I've talked with Elsie a number of times and she keeps encouraging me," she said, referring to NECCA coach and co-founder Elsie Smith, whose mother takes classes at NECCA, "and she's older than I am!" Lenhart exclaimed.

Myles Belove is a NECCA veteran at only 11 years old. He was showing off his Diablo skills upstairs where juggling equipment was brought out.

Belove does have an array of non-aerial skills, however. He juggles and does balancing acts and tricks on the Golden Globe. He practices juggling almost every day and said he was grateful to NECCA.

"I really like how they just accept you," he said. "You come into the community and you're apart of it. No matter if you're old or young. You can be any age and be apart of NECCA, and that's really amazing. It's a really nice community."

Some community members came just to see inside the building

"This place has been in the news a lot and I was really happy about how it turned out," Anne Hier said. "And I wanted to come to see for myself."

She came to the opening with her neighbor, Doris Dearborn.

Things have felt good for the organization since then, Lewis said.

"There seems to be a nice people check," he said. "It's like everyone who walks in through the door is nice."

He's been helping to make sure the organization is financially stable. He's spending his time working with funders and banks. He said there was a bit of a learning curb.

"Those of us that are doing the budget haven't been involved before," he said. "It's a lot of change to do, but it's just wonderful people all around from the kids to the staff."

Financially, Lewis thinks the organization is doing well. "A lot of things were said in July, but we're actually in decent shape financially. We've got work to do. We took a hit from that," he said. Internally, Lewis said the organization is in good shape and they're working to prove it to the public by doing an accounting review from 2017. "The public deserves that knowledge and we want to share it," he said. The group has been engaging accountants and lawyers to make sure everything is being handled responsibly.

Casey Haynes manages the front desk at NECCA. He said the job is a nice middle ground between organizational work and getting to pursue his creative passions. He gets a free circus class every session and likes the environment.

"I work at a desk but if I wanna take a break and jump into a foam pit, it's there," he said. Since the new board took over, Haynes said, everyone's on the same age and working towards a common goal. "It's been a real 180 in terms of mood and purpose," he said. "There's been a real focus back towards the fun."

Johna Applestein was entertaining people in her clown get up. She just graduated from the intensive classes and is excited to start Protrack in the fall. She's been at NECCA since 2014.

"I'm excited to see what the program is like this year," she said, adding that she thinks the program will be more structured.

Forchion said she's feeling positive about the future of the organization. "We have a fabulous team," she said. "It's a positive place to be and a day like today reminds us how much the community values us."

One of the new additions for the fall that Forchion is excited about is the trampoline and foam pit. NECCA's old space never allowed for a trampoline because the ceilings were too low. The foam pit is exciting because people can drop into it when they're doing aerials.

"If you're a not-so-young acrobat who might still want to tumble you can land in the pit without worrying about your ankles and the impact."

Forchion is also excited because she recently signed a contract with Axis Dance Company, which teaches dance for people with physical disabilities. Forchion is excited because the NECCA building is handicap accessible so people in wheelchairs can join in the fun. Axis Dance Company will be holding a workshop Nov. 4 and 5 called Dance 4 All at NECCA.

You can catches NECCA performing Sept. 1 at the Brattleboro Gallery Walk, Sept. 3 and 4 at the Guilford Fair, Sept. 16 at the River Valley Kids Fair, Sept. 23 at the New England Street Food Festival, and Sept. 23 and 24 at the Steampunk Festival in Springfield.