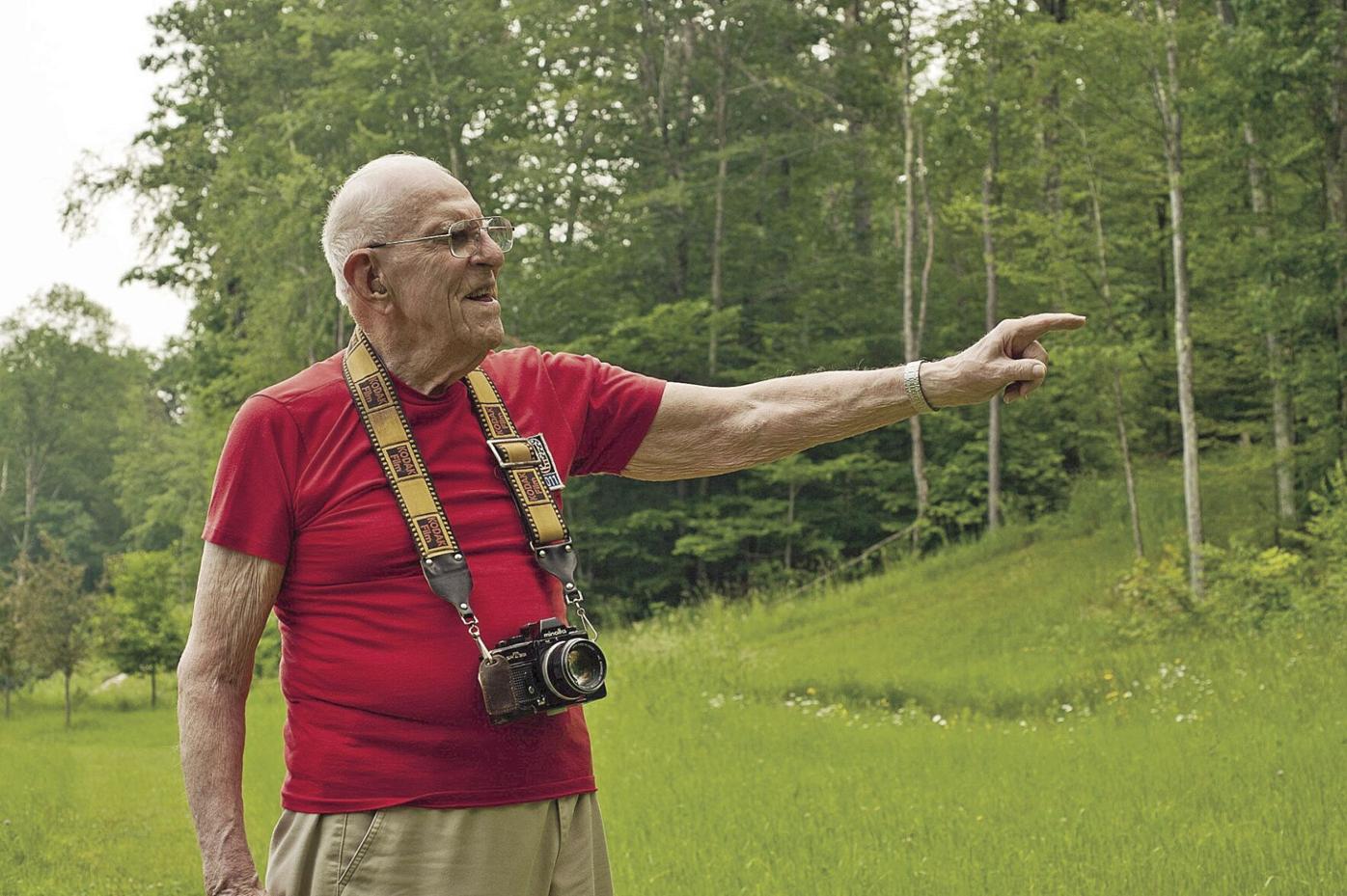 Telling the story of its construction by youth volunteers, Warren Patrick points toward one of his favorite walking trails near his home at Valley Cares in Townshend. 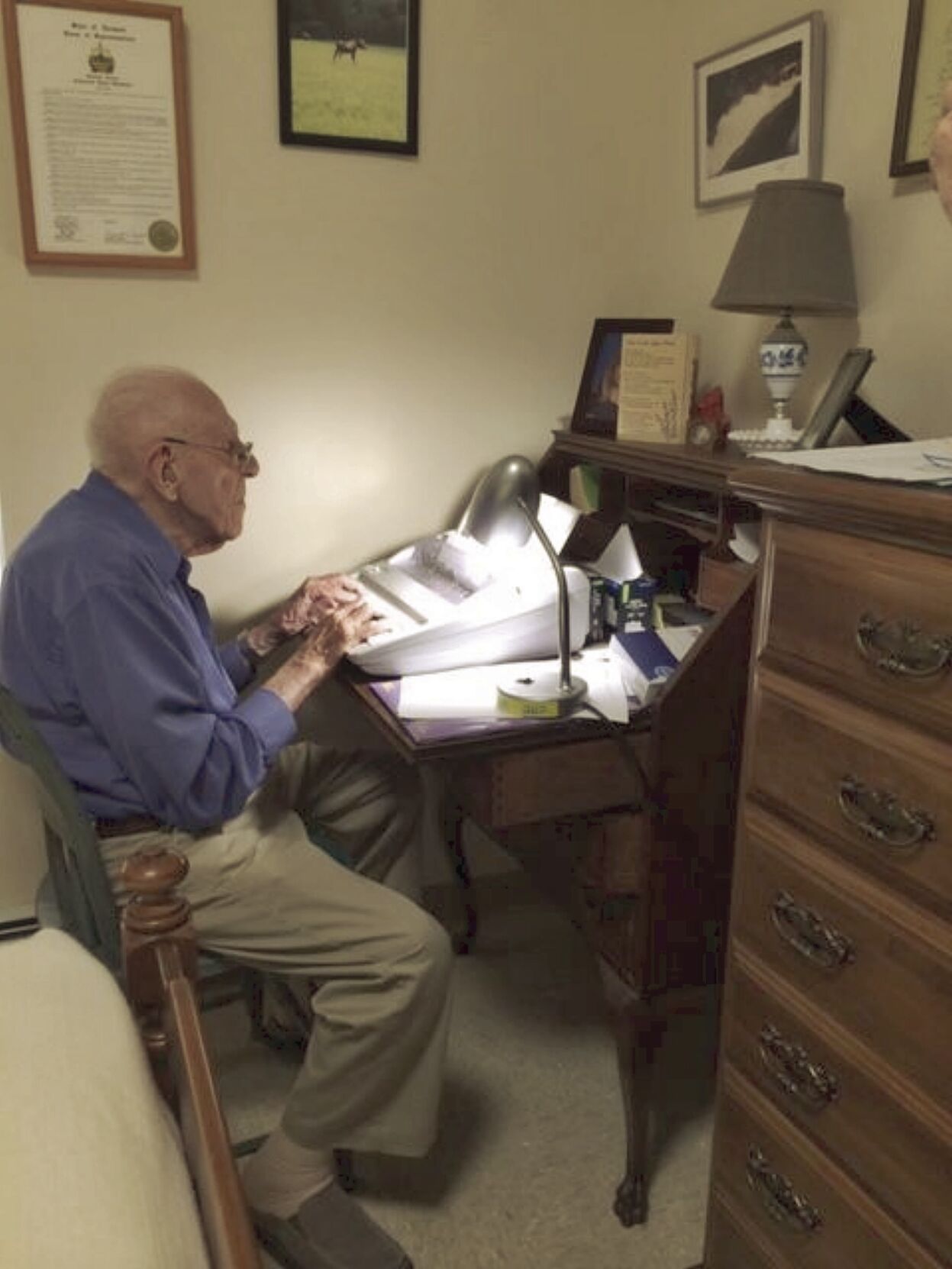 Warren Patrick at his typewriter. 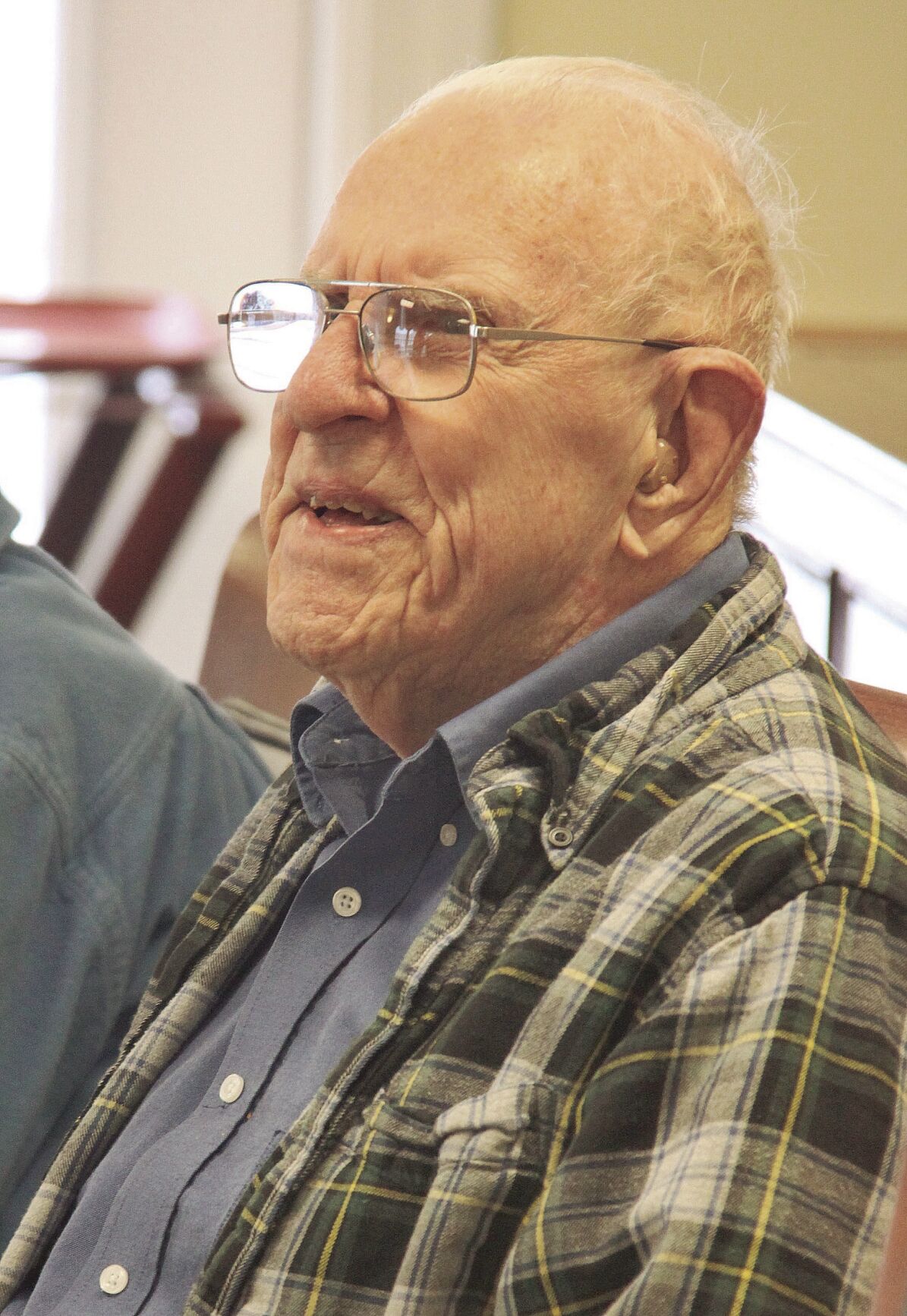 Warren Patrick of West River Valley Assisted Living enjoys the caroling of Our Lady of the Valley Church members.

Telling the story of its construction by youth volunteers, Warren Patrick points toward one of his favorite walking trails near his home at Valley Cares in Townshend.

Warren Patrick at his typewriter.

Warren Patrick of West River Valley Assisted Living enjoys the caroling of Our Lady of the Valley Church members.

TOWNSHEND — Warren Patrick led a long life, surrounded by what made him happy.

“He was a simple man who loved Vermont, loved nature and loved his family,” said Sally Wadsworth of Stratton, who described being amazed by her father’s mental and physical abilities at his age.

Patrick moved into Valley Cares Assisted Living the year the Townshend facility opened and died there peacefully 13 years later on Sept. 27. He was 109 and known as the second oldest man living in Vermont.

Patrick resided at Valley Cares longest of anyone by far, Wadsworth said. He developed friendships with other residents, many of which were short lived due to their deaths.

Wadsworth said Valley Cares has a “very homelike atmosphere,” which is “very much a community.”

There, Patrick could spend time working on projects in his apartment, then attend functions or meals with the other residents. He watched and took photographs of animals and seasons changing from his window. He selected the room based on the view.

“He managed his own medications and his own finances and all that right up to the last six months,” Wadsworth said. “I would say my sister and I would oversee the checkbook because his math wasn’t quite as good but he was fiercely independent.”

Wadsworth said the group conducting the New England Centenarian Study notified Patrick a year ago about participating, but the coronavirus pandemic prevented an interview from happening. It was the second pandemic he witnessed, having lived through the one in 1918.

Warren was an avid photographer who was taking pictures up until about a year ago. Wadsworth said he would get his film sent out to be developed.

“Through the lens of his camera, he showed what was important to him in life, nature, people and Vermont,” reads a note from one of Wadsworth’s friends.

In an article about antique camera collecting in 1974, Yankee Magazine said Patrick had 125 antique cameras at the time. Wadsworth called it a hobby and source of income for him.

Patrick also loved to write. His letters to the editor of the Reformer began appearing in the 1960s.

His writing continued until April when he went into Grace Cottage after a fall. He liked to use a typewriter. He’d write down prayers to say at Thanksgiving, letters communicating about the sale of cameras, notes about the past and things to remember.

“He was someone who told a lot of jokes, and he made up jokes and quips and things,” Wadsworth said.

Patrick started West River Valley Realty and Insurance in the 1950s and ran it until the 1980s. He would buy land and build camps or cottages to be used as second homes.

Serving as town clerk and treasurer in Jamaica while running the real estate company were “complementary,” Wadsworth said.

“He was pretty clever really,” she said.

As Patrick got older, he remained vigorous. He refused to take an elevator.

Wadsworth recalled him saying, “If I stop taking the stairs, after a while I won’t be able to do it.”

As a father, Patrick shared his principles and had certain expectations for his three daughters, Wadsworth said. She described him as being “loving but very firm” and taking care of her mother when she wasn’t well.

Patrick also was dedicated to his community. He served as moderator of annual Town Meeting in Jamaica for many years and stayed involved with the local Masonic lodge and Jamaica Community Church.

Wadsworth found it ironic that Patrick lived at Valley Cares for 13 years, as he considered it his lucky number. Patrick and his father were both born on June 13.

Wadsworth said her father loved Valley Cares and was always saying he couldn’t find a better place to call home.

“Because it really was his home and he would say, ‘I think they’re building other places and modeling it after this one,’” she said. “And they’re absolutely wonderful there. I can’t say enough about them. It isn’t an institution. It’s home for many people.”

Paulene Lawrence of Townshend said up until his last two days, her father always spoke of “how greatly he was blessed.”

“Full of gratitude,” added Marlene Thibault of St. Albans, the eldest of the three daughters.

She said Patrick enthusiastically supported her education as she worked her way up to graduating from University of Vermont.

Thibault recalled finding it funny when her children’s friends thought they were going to a Caribbean island when they were visiting their grandparents in Jamaica for a weekend. One of her favorite memories is when her father was asked to be a substitute teacher at Leland & Gray Seminary School while she was attending the school.

The family moved to Jamaica from Connecticut in 1945. Thibault said her daughter will be staying with her family at the Stone Boat Farm Bed and Breakfast, the Route 30 property where the Patrick family first lived, for the celebration of life this weekend.

Patrick went deer hunting in Dover and Wilmington before deciding to make the move to the Green Mountain State, Thibault said.

“He loved Vermont,” she said. “He thought he could bring his family, live off the land and do subsistence farming.”

She said their first home in Jamaica had no toilet, running water or heat at first.

Susanne Shapiro, former executive director of Valley Cares who still works in the office to help with the transition in leadership, said Patrick was the only person who still lived at the facility since she started there eight-and-a-half years ago. She looked at his health and longevity as an indicator for the high quality of care offered at the facility.

“Some people called him Valley Care’s mascot,” she said, adding that everyone in the community knew of him through newspaper articles about him and his letters to the editor.

Shapiro said Patrick was always well liked and had good manners. Until recently, he would take walks outside every day.

Patrick also always remained positive in his outlook, something Shapiro believed helped him live as long as he did.

Shapiro recently saw a list where Patrick was named one of 116 men in the United States over the age of 106.

“I’m honored to have been a close part of this man’s life for the last eight years,” she said. “I think it’s going to be a pretty long time until I have a client or patient, as a nurse, of that age.”

Shapiro said she had a client she provided home care to in Brattleboro who died at the age of 106.

“It’s unusual for men to become that old,” she said.

Weeks before Patrick’s death, Valley Cares hosted a presentation by the Southern Vermont Natural History Museum about owls and hawks on the front lawn.

“He was always interested in wildlife and always took pictures of wildlife,” Shapiro said. “That was one of the last things I did with him, and I’m happy we did.”

She said she’ll miss Patrick and his family, too.