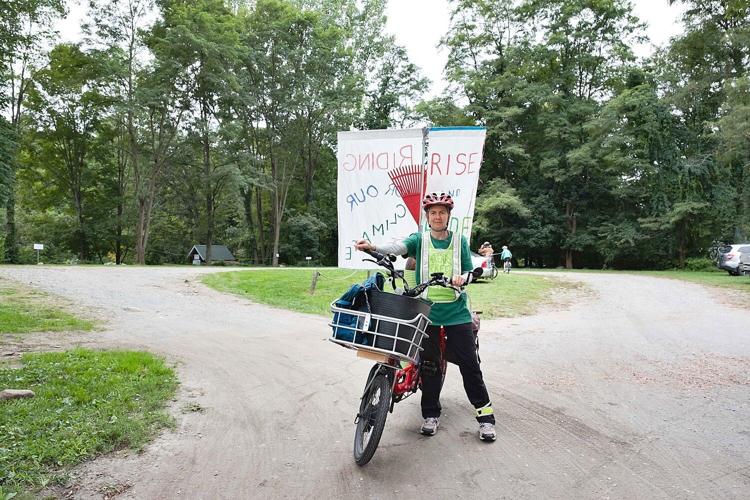 Linda Bailey with a "Rise and Ride" sign on her bike. 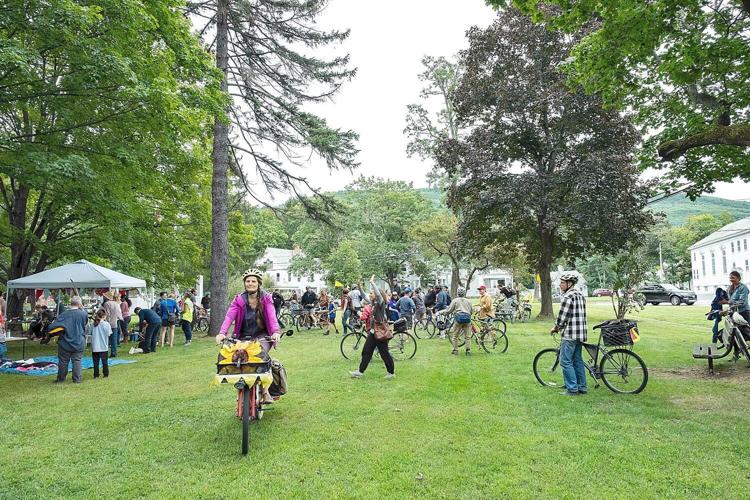 Nancy Detra rides her bicycle Saturday during the Rise for Climate event.

Linda Bailey with a "Rise and Ride" sign on her bike.

Nancy Detra rides her bicycle Saturday during the Rise for Climate event.

BRATTLEBORO — The Windham County Rise for Climate Rally and Ride had residents rethinking relationships between transportation and the environment.

"We were envisioning a future where space and plentiful bike paths make biking a realistic option for commuters," said Abby Mnookin, who serves on the leadership team of 350 Brattleboro and is a part-time organizer for the larger network, 350 Vermont. "I do bike with my kids a lot of the time because my partner and I share one car. So I cargo bike with them a lot, even year-round, but it feels risky in some places in some times and I'm hopeful that the more of us who do it, the more pressure we'll put on local officials to really look at what some different options are for making it safer and more viable."

A "critical mass ride" saw more than 100 cyclists of all ages taking over the right lane on Western Avenue Saturday. They traveled from the Brattleboro Farmers' Market, past Green Street School to Elliot Street, to Main Street to the Brattleboro Common, where participants of a march from the Brattleboro Food Co-op down Main Street met them for the rally. More than 200 people attended the event, according to Daniel Quip, a member of the leadership team at 350 Brattleboro who also works with 350.org, created by Bill McKibben.

Bellows Falls Community Bike Project had a stationary bicycle that could be pedaled to power a movie. VBike had a "bicycle petting zoo," where different types of bikes could be observed.

"It was so powerful," Mnookin said. "It was very fun."

The Brattleboro event was among rallies organized around the world ahead of Wednesday's Global Action Summit in San Francisco. California Gov. Jerry Brown is convening the meeting to discuss taking "global action measures now and not just paying lip service to it," Mnookin said, adding that the involved leaders are appalled at the withdrawal of the United States from the Paris Climate Accord.

"Ideally, it would be a re-commitment of these local and state leaders as well as some business leaders and (non-governmental organizations) regardless of what the federal government is doing," she said.

The Vermont rallies were seen as a way to come up with more local actions rather than a single action from the Statehouse in Montpelier. Mnookin said individuals and communities are calling on local leaders to support different initiatives.

"We talked about how we can all make individual choices, but it's also so much bigger than that," she said. "It's also going to take collective action and political will."

Participants in the Brattleboro event Saturday discussed improving public transportation access and carpooling in rural communities, along with inexpensive ways to increase the number of homes with solar panels or electric vehicles on the road.

Mnookin has been interested in environmental justice issues since she was a teenager. But the birth of her oldest child, now 6, is when she decided she had to focus her energy "because it just felt like the stakes really changed for me in that moment," she said.

"I think people are really starting to acknowledge these severe weather events that are happening more frequently around the world are not just random, that these are really more directly related to the burning of fossil fuels and the higher levels of greenhouse gases in our atmosphere," she said. "For myself, I definitely feel like taking action is one of the ways I kind of grapple with this massive, global issue."

Saturday's rally had a positive feel to Quip, who noticed some new faces in the crowd as compared to similar events.

"It was good," he said, adding that protests can sometimes take on a more combative tone. "I think this was more about solutions and trying to build unity."

One of his biggest projects, he said, is to "push the town to get off of fossil fuels."

Quip said he is frequently talking with people on the street about climate change. He recalls hearing from "very few" deniers.

"I think the last couple of years, we've really started to see how climate change affects us locally here in Vermont," he said. "So we've seen really strange weather in our winters and in our summers. We've seen those real extremes."

Nationally, Quip pointed to wildfires in the West and extreme droughts in the South and Southwest. He got into climate activism about two years ago while working on economic justice issues. That experience "drove me to want to take action, rather than just be angry about stuff," he said.