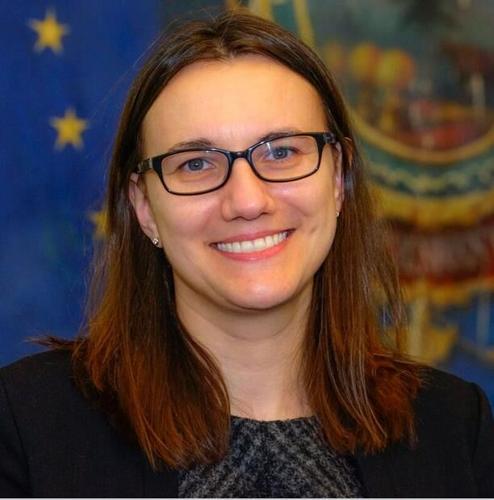 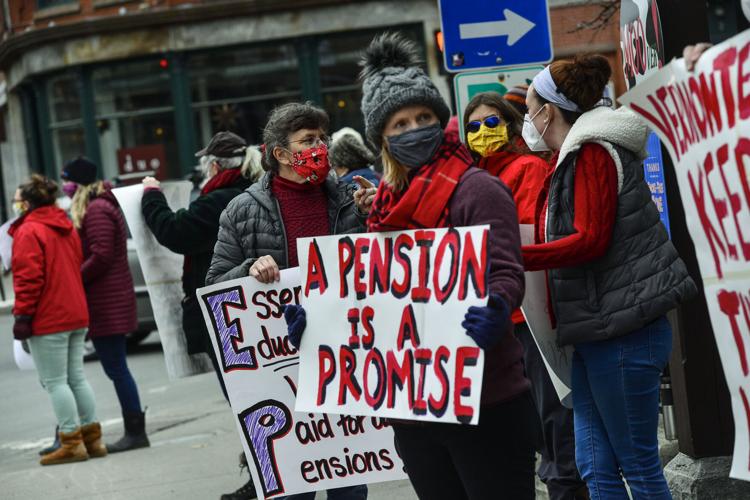 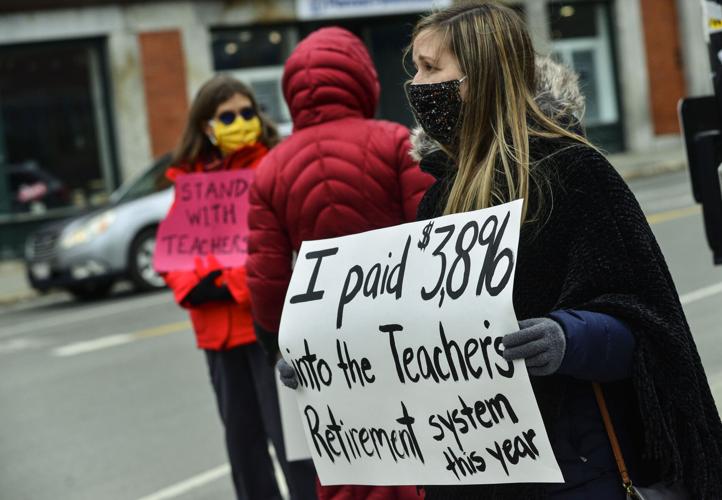 Lindsay Levesque, a teacher, and others rally at Pliny Park, in Brattleboro, on Friday to demonstrate about Vermont’s pension reform plan. 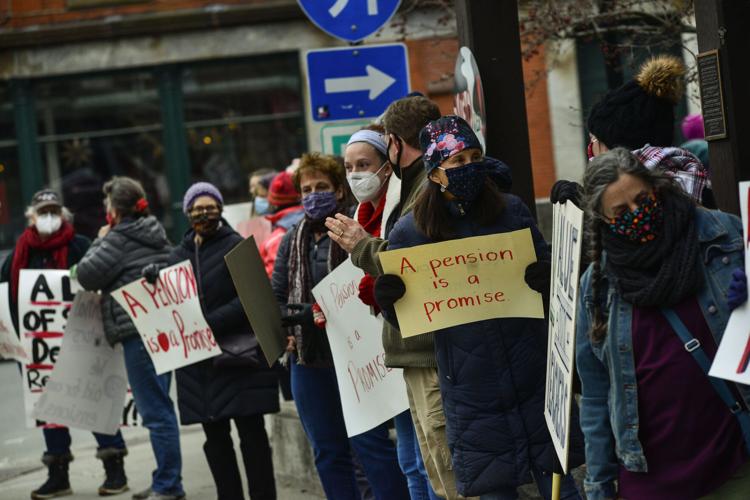 Heather Sperling, a teacher, and others rally at Pliny Park, in Brattleboro, to demonstrate about Vermont’s pension reform plan.

Lindsay Levesque, a teacher, and others rally at Pliny Park, in Brattleboro, on Friday to demonstrate about Vermont’s pension reform plan.

Heather Sperling, a teacher, and others rally at Pliny Park, in Brattleboro, to demonstrate about Vermont’s pension reform plan.

MONTPELIER — In a shift in strategy, Vermont House Speaker Jill Krowinski has directed the House Government Operations Committee to focus on reforming state pension governance this session, and establish a task force that will come up with a plan to close the state’s multibillion-dollar unfunded pension liability.

The change marked a significant turn from a proposal that envisioned benefit reductions and higher employee costs as well as a change in governance. That plan was blasted by unionized employees as asking them to work longer, pay in more, and get back less.

In an online news conference Friday morning, Krowinski emphasized that the problem needs to be addressed now in order to save the pension system for future retirees and reduce general fund spending on filling the liability gap. She acknowledged the pain and anxiety the conversation to date has caused state employees. And she called on Gov. Phil Scott to come to the table on reaching a solution.

“I want to pause and acknowledge how hard and emotional this conversation has been for all those concerned,” Krowinski said. “We are taking about the economic future of dedicated employees.”

Scott said he was “disappointed” that the proposal was stalling, but encouraged that discussion is still taking place.

“I’ve been at the table the last four years” talking about the issue, Scott said. “I’m a willing partner. I’ll be at the table. I don’t want to be the main course.”

Treasurer Beth Pearce was also disappointed that consensus could not be reached, but was pleased that the House will move forward on governance. She hoped the reorganization will reinforce the Vermont Pension Investment Committee’s success over the past several years, which has put it in the top one-third of pension systems its size.

“That being said, I want to acknowledge the difficult conversations that have been held to date by all parties,” Pearce said. “While I recognize that any required benefit changes will be painful, we cannot afford to delay action.”

Pearce also said the Legislature should take the opportunity to pre-fund the health care benefits for pension recipients, a change that could shave $1.6 billion off the unfunded liability by taking advantage of compound interest. “I think that needs to be done this year,” she said.

Krowinski said the most consensus has been on reviewing the funds’ governance, so the House will start there. “The legislature doesn’t make investment decisions, but we can change the board structure to make it more transparent, independent, and get more expertise at the table,” she said.

Second, it will create a pension task force “that brings all stakeholders, from the unions to the governor, to the table to look at possible revenue sources and plan and benefit changes to fix this problem,” Krowinski said. That task force will work over the summer, in person if possible. The $150 million the House set aside as an unfunded liability down payment will be held in reserve while the task force does its work.

Scott said he would not support a down payment on the system without structural change.

For the past week, the Government Operations Committee has been taking testimony on a proposal to close the gap by extending the eligibility requirements for vesting in the pension, increasing employee payroll contributions, and reducing cost of living adjustments for benefits over $24,000. In hearings, employees blasted the plan, saying it would force them to work longer, pay more, and receive less.

Krowniski said she has been listening and hearing those concerns, through public hearings and direct conversations. She hopes that the pandemic will ease enough that the task force can do its work in person over the summer.

“I want to create space for that conversation to continue,” she said. “What I see right now is emotions are high. Not being able to be in person is just really, really hard.”

Addressing the problem now, when the state is about to receive an $1.3 billion in federal pandemic relief, is crucial to the pension system and to taxpayers, Krowinski said.

She pointed out that the fiscal 2022 budget already contains $300 million to cover pension payments and benefits. “That’s an enormous amount of money. If we do nothing that number will grow and grow and grow,” Krowinski said. “The longer we wait to make, the tougher the decisions will be down the road,” she said.

Krowinski and House leaders had hoped to address pensions this session, given the growth of unfunded liability and growing dollars spent out of the general fund — $300 million in the fiscal 2022 budget alone — on annual contributions.

According to the Legislative Joint Fiscal Office, unfunded liability sits at $2.684 billion for retiree health care benefits and $2.97 billion for pensions, a total of $5.6 billion. Pension payments alone now consume $199.4, or 10.48 percent of every General Fund dollar, according to JFO’s analysis.

Senate President Pro Tempore Becca Balint, D-Windham, said she and Krowinski have been “in close conversation” over the past five days. She said they both share goals of making a significant down payment, and agree on addressing governance and establishing a task force on benefits, calling it “the right path forward.”

“We want to do all we can to maintain the defined benefit system, and we recognize that all options must be on the table for the Task Force, including an increase in revenue and benefit changes,” Balint said.

“I will help make sure that the Senate is doing its part to support this sensible approach,” Balint said. “I want public employees to know that we heard them and that we are committed to working together to save the pension system.”

Gannon, D-Windham 5, and Rep. Mike Mrowicki, D-Windham 4, both members of the Government Operations Committee, agreed with the approach.

“Governance may actually be the most important issue to tackle,” Gannon said. “Until recently, our investments have not performed well and have rarely met the assumed rate of return, adding hundreds of millions to our unfunded pension liability.”

Under the leadership of VPIC chairperson Tom Golonka, the state has seen seen better investment returns and a more conservative assumed rate of return, Gannon said.

“We now need to institutionalize Tom’s investment expertise into the VPIC governance structure so that we don’t return to the days of poor investment performance and overly optimistic assumed rates of return,” he said.

“I think we’ve convinced people there is a problem and we need to do something,” Mrwoicki said. “Among what I took from the public hearings is there’s no confidence in the pension boards and also not clear knowledge of who is on those boards and how their decisions are made. Having that process be more transparent seems like an essential part of restoring confidence in the boards.”

Steve Howard, the executive director of the Vermont State Employees Association, said he was grateful that legislative leadership listened to unionized employees’ concerns and thankful that members were willing to “step up and fight.” He renewed the union’s call for a temporary surcharge on incomes over $500,000 to help pay down the unfunded liability, and called on Scott to show leadership by supporting it.

Howard said he found it “astonishing” that Scott has allowed Krowinski, a first-year speaker, to take most of the heat on the issue. “[Scott] was hired to run the state. And I like the guy, he’s a nice guy, but if he’s not gonna run the state, get out of the way and we’ll find someone who will,” Howard said.

But Scott said as the majority party controlling the Legislature, “this is their moment.”

“This is their responsibility as the majority party to get something done,” Scott said. “I’ve given them great credit for bringing this up.”

The three pension funds — for state employees, K-12 public school teachers and municipal employees — are each led by a board of trustees, with members of those boards sitting on the Vermont Pension Investment Committee (VPIC).

The starting proposal, produced by House Government Operations chairperson Rep. Sarah Copeland Hanzas and vice-chair Rep. John Gannon, suggested expanding the membership of VPIC from 7 to 15. That proposal drew opposition from unionized employees, saying most of its members represented management rather than employees.

In honor of baseball’s Opening Day last week, I’ll start with a question: What does hitting or pitching a baseball have in common with solving…

Ideas flow in on alternatives to initial pension reform plan