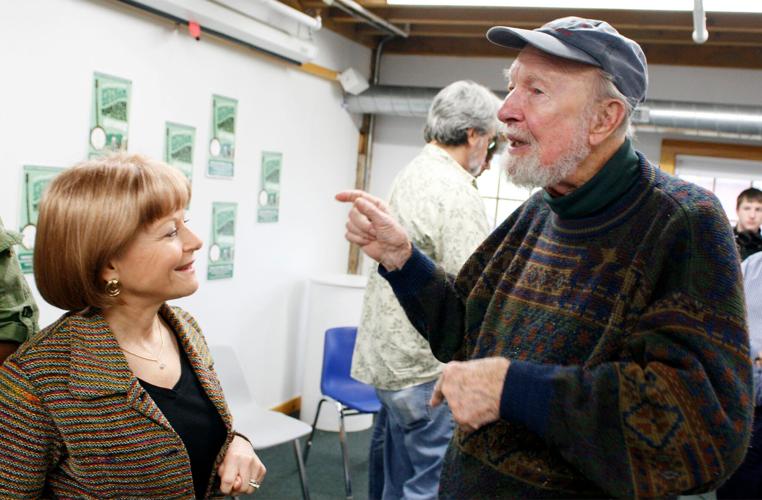 Pete Seeger talks to Strolling of the Heifers Executive Director Orly Munzing during a press conference regarding Seeger's performance at the Latchis in 2008. (Reformer file photo) 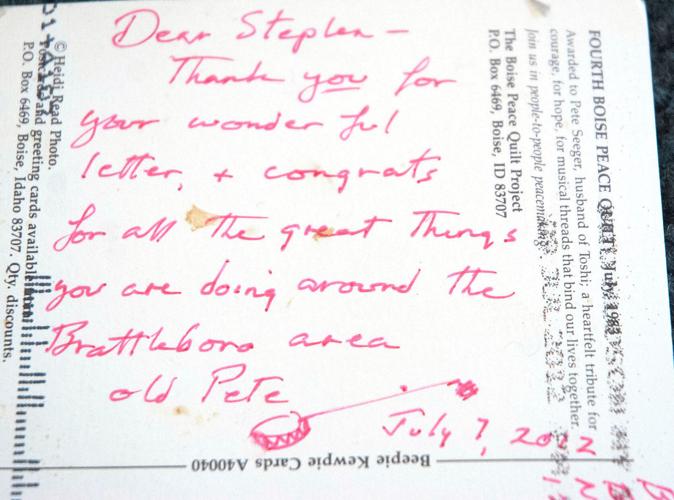 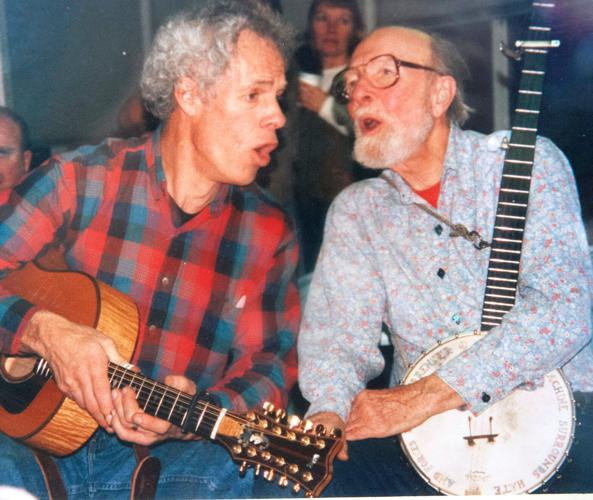 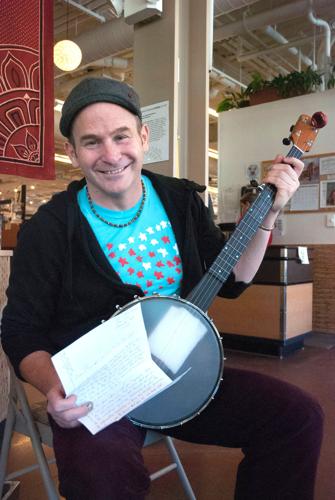 Brendan Taaffe holds a letter that he received from Pete Seeger. (Kayla Rice/Reformer)

Pete Seeger talks to Strolling of the Heifers Executive Director Orly Munzing during a press conference regarding Seeger's performance at the Latchis in 2008. (Reformer file photo)

Brendan Taaffe holds a letter that he received from Pete Seeger. (Kayla Rice/Reformer)

BRATTLEBORO -- When Pete Seeger was in Brattleboro in September 2008 he wanted to take a walk up to the Crowell Lot on Western Avenue to take a look at the trees.

Seeger's great-grandparents owned the mansion, "Lindenhurst," which once sat on the Crowell Lot and Seeger visited the home as a boy around 1926, when he was 7. He could not remember exactly where in Brattleboro the mansion was once located, but he knew that if he found the old maple trees that stood outside the mansion he could be sure he was in the right place.

Seeger was in town that day to give a benefit concert at the Latchis Theater for a business loan program for farmers that was being co-sponsored by the Strolling of the Heifers.

New England Youth Theater founder Stephen Stearns was friends with Seeger and they drove around Brattleboro that morning trying to determine where the mansion once stood.

"He took me way, way to the back of the Crowell Lot and found this ring of maple trees, and when he tuned around and looked through the trees he said, ‘This is it,'" Stearns remembered. "He talked about how his grandfather used to walk through the trees to the Estey Organ factory. We were blown away."

Seeger died Monday at the age of 94 in New York City. He is being remembered for standing up to the House Un-American Activities Committee in the 1950s, for bringing folk music to the mainstream through his work with The Weavers in the 1940s and ‘50s, and for singing about and working on countless social issues including civil rights, union organization, farming policy and the environment.

But now that his friend is gone, Stearns said he perhaps touched the most lives through his ability to get people to sing.

"I have four major influences in my life and Pete is right at the top of that list," Stearns said. "He was the ideal mentor because as much as he taught us, it was never about him. He encouraged people to get involved. He said, ‘We might not ever make a difference but at least we get to spend our time with great people.'"

As a folkie growing up in New England, Stearns listened to The Weavers and he said the songs encouraged him to become an artist and pursue theater and music.

When Seeger gave a concert in Hanover, N.H., in 1981, Stearns waited until midnight for the chance to go backstage and meet his hero.

It was a decision, Stearns said, that changed his life.

In the dressing room that night Stearns told Seeger about a play he was involved with, "A Peasant of El Salvador," which dramatized the brutalities of the civil war in El Salvador.

That night Seeger invited Stearns and his artistic partner, Peter Gould, to perform the play at Seeger's music and art festival, The Clearwater Festival, on the Hudson River in New York. The gig introduced the Vermont actors to a wide audience and Stearns said the show led to other performance opportunities across the country and world.

And the following year, when Stearns joined Seeger picking up litter around the site, the two formed a bond that continued throughout Seeger's life. Seeger would eventually agree to become a board member of The New England Youth Theater and Stearns spoke with him a few months ago, understanding that Seeger was in declining health.

"His message was to keep on keeping on," Stearns said. "He lived his life to such a full degree and involved so many people. This is a time to celebrate a life. All things must pass."

Brattleboro musician and teacher Peter Amidon was giving a shape note singing workshop in Albany in 1990 when Seeger approached him about starting a new participatory stage at Clearwater to encourage more festival goers to sing.

"I was completely floored and humbled to have Pete Seeger approach me," Amidon said. "Pete thought too many people were watching and he wanted more people singing together. He was really excited about having us start that."

The participatory stage is now an integral part of the festival, which is held every year in June at Croton Point Park.

Seeger had been encouraging audiences to sing for decades and so it might have been overwhelming to have him ask you about leading a workshop, but Amidon said he never felt intimidated.

"You didn't get nervous around Pete. He was so soulful and generous and genuine," Amidon said. "He liked to make things happen and get people together. He was always excited abut something."

Brendan Taaffe is a musician who lives in Brattleboro and he grew up listening to Seeger.

"When you went to a Pete Seeger concert he would say, ‘Of course you can sing. Everyone can sing,'" Taaffe said. "That was a big influence on me. He gave us all a license to go to these incredibly rich folk songs and make them our own. He invited us to be a part of that tradition."

A few years ago Taaffe was recording an album of children's songs and he wrote Seeger to see if he could take part in the recording. Taaffe received a letter stating that Seeger was too busy, but Taaffe said even in declining the offer Seeger's words were encouraging.

"He told me to stay involved and never give up," Taaffe said. "It was the only time I had been rejected in such an uplifting way."

-- A remembrance of the life of Pete Seeger (interactive), click here.