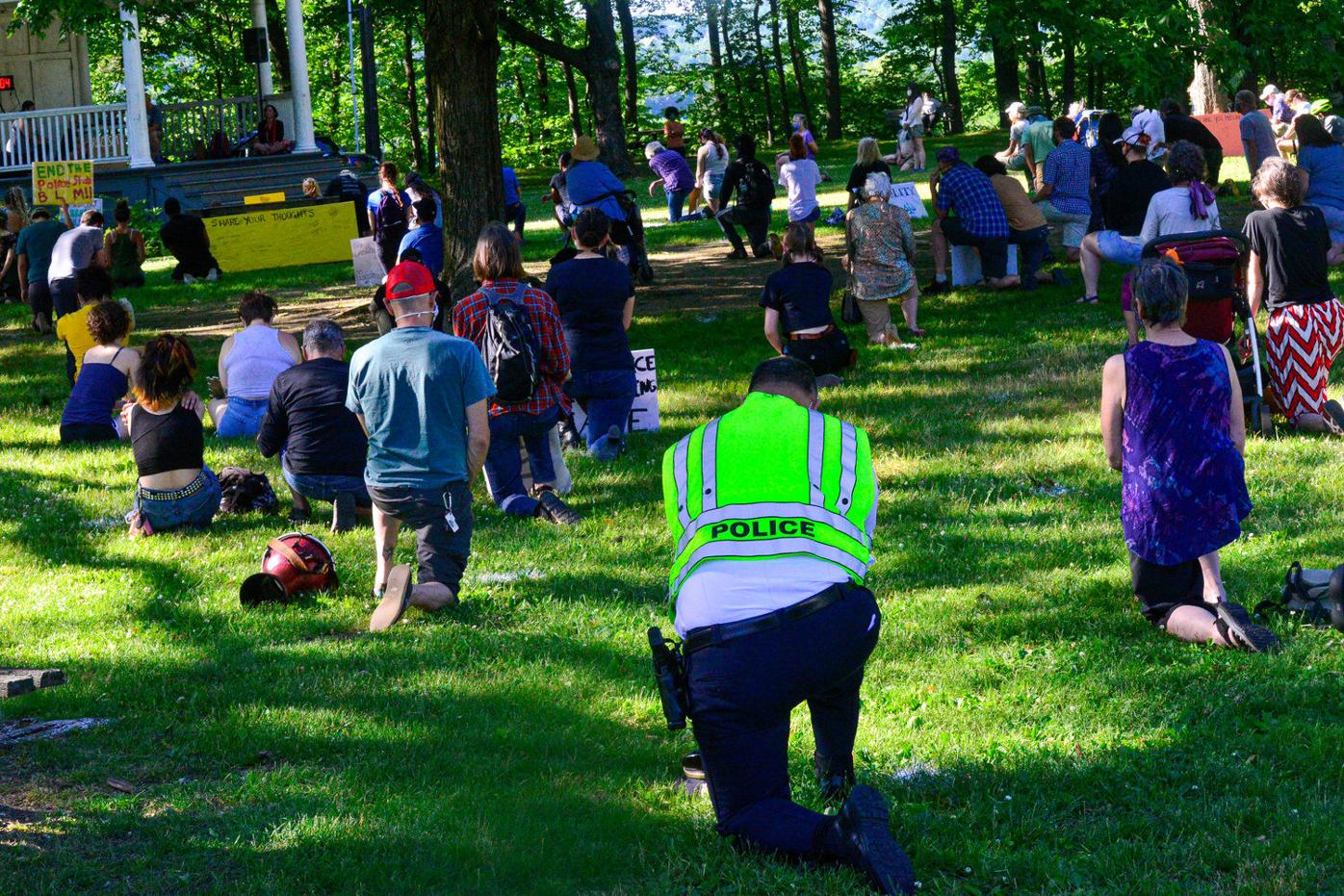 Brattleboro, Vt., Police Chief Micheal Fitzgerald joins with several hundred people to kneel for 8 minutes and 46 seconds in honor of George Floyd, who was killed by Minneapolis Police on May 25, 2020, during a Black Lives Matter silent protest at the Brattleboro Common, in Brattleboro, Vt., on Friday, June 12, 2020. 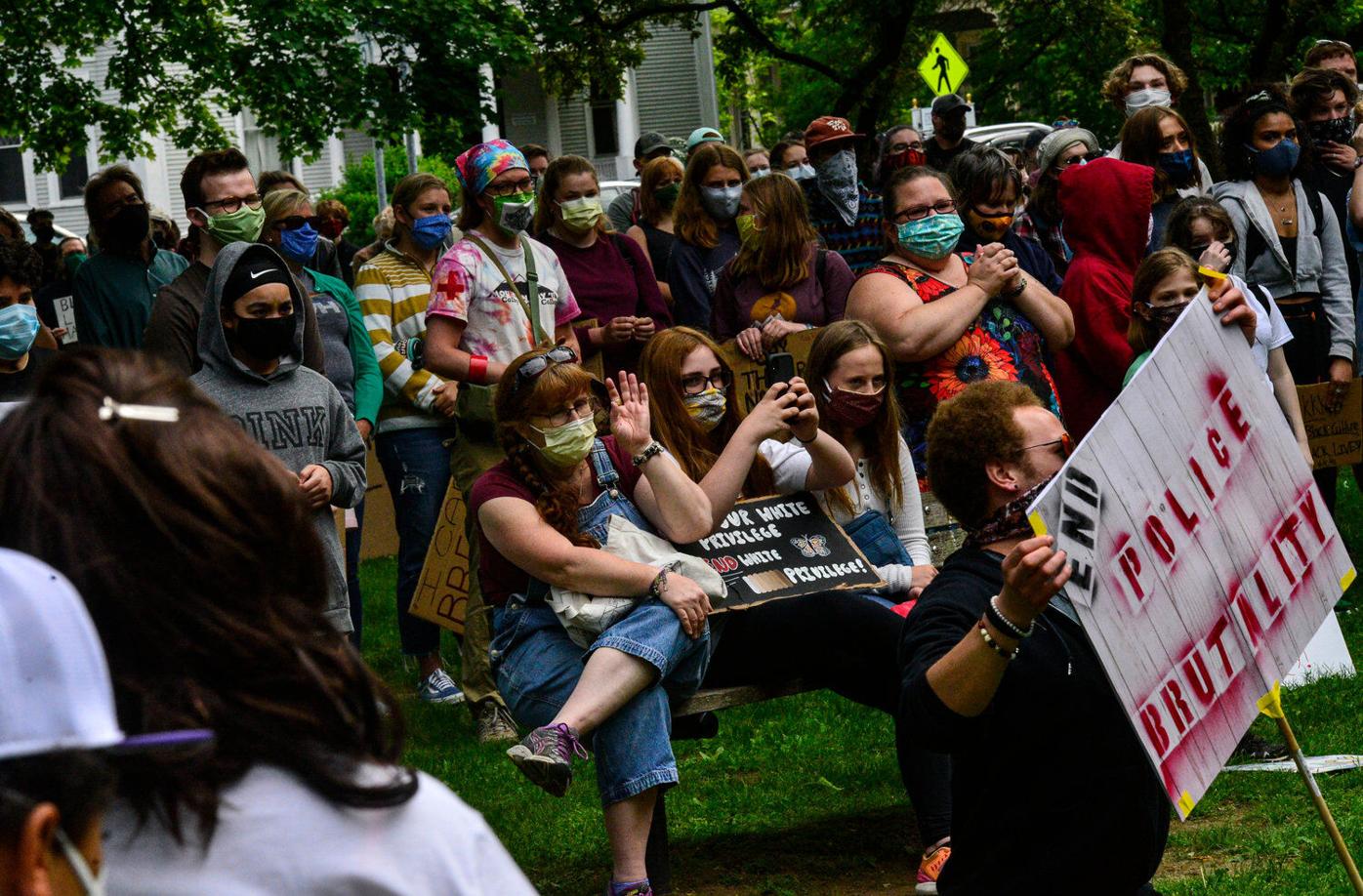 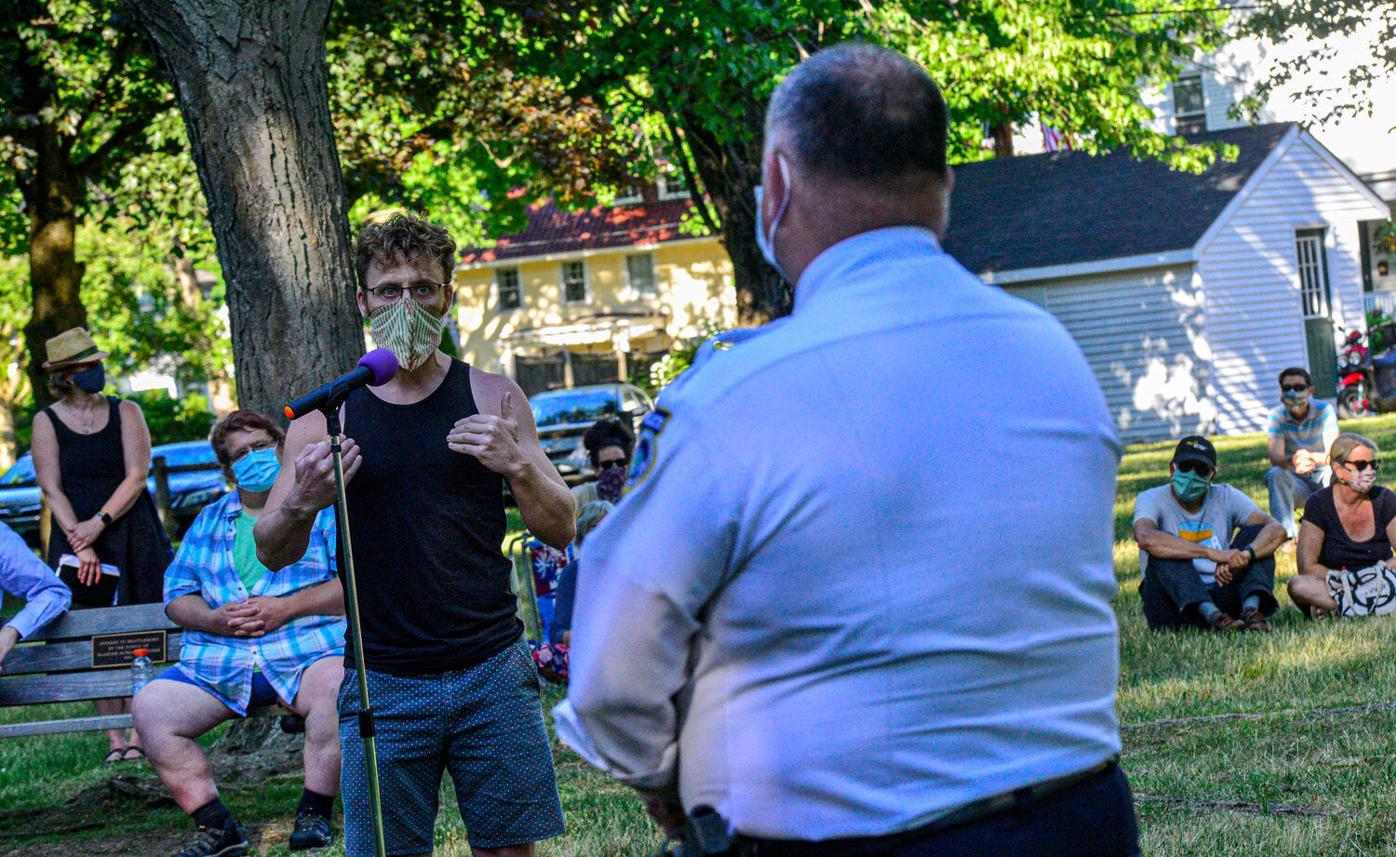 Brattleboro Police Chief Michael Fitzgerald holds a community forum at the Common, in Brattleboro, Vt., to talk about the police department and get feedback from the community on how to improve on Wednesday, June 17, 2020.

Brattleboro, Vt., Police Chief Micheal Fitzgerald joins with several hundred people to kneel for 8 minutes and 46 seconds in honor of George Floyd, who was killed by Minneapolis Police on May 25, 2020, during a Black Lives Matter silent protest at the Brattleboro Common, in Brattleboro, Vt., on Friday, June 12, 2020.

Brattleboro Police Chief Michael Fitzgerald holds a community forum at the Common, in Brattleboro, Vt., to talk about the police department and get feedback from the community on how to improve on Wednesday, June 17, 2020.

BRATTLEBORO — The Brattleboro Select Board took a look Tuesday at two proposals on how the town should proceed in its review of the Brattleboro Police Department.

At its June 16 meeting, the members of the board responded to requests from the community to begin a process to review the practices of the department, the services the BPD provides and its funding. The decision to review the police department was precipitated by national civil unrest over the death of George Floyd at the hands of officers in Minneapolis. Calls to "defund" police departments arose during the protests, and municipalities around the country have agreed to review their own police departments and determine whether funding should be allocated to other resources, such as social services.

"We are going to talk about a good, fair, equitable community-based conversation ... before November when we consider the overall budget," said Select Board Chairman Tim Wessel during Tuesday night's board meeting.

"I welcome this examination," said Vice-Chairwoman Elizabeth McLoughlin. "We say it can't happen here, but others might have quite a different experience."

McLoughin presented the first proposal, which calls for volunteer facilitators and committee members from the community.

The committee will also be tasked with suggesting new policies and new training for the BPD based upon Campaign Zero, "or other established criteria and in full compliance with newly adopted state and federal laws," states the proposal.

HB Lozito, the executive director of Out in the Open and a Town Meeting Representative, presented a proposal that had been endorsed by 14 organizations and 150 individuals.

That proposal calls for open, accessible meetings, child care, interpretative and translation services, opportunities for public feedback without police present, a process to collect stories that protects the anonymity of those fearful of reprisal, holding meetings where Black, Indigenous People of Color (BIPOC) feel comfortable, and asking the police to take their weapons off during any community or committee meetings.

"In order to honor the time and labor of the marginalized people who must be included in any authentic process regarding this issue in our community," states the proposal presented by Lozito, "we ask that you pay participants from impacted communities a stipend for their time, labor, and wisdom."

Calling for volunteers, as mentioned in the proposal presented by McLoughlin, was not well received by a number of community members who participated in the online meeting.

"If you are having facilitators that are volunteers you are not going to have people of color," said Amber Arnold. "This doesn't create an equitable space for those people to contribute ..."

Shela Linton, who grew up in Brattleboro and is a co-founder of The Root Social Justice Center, agreed with Arnold.

"Why isn't their time worthy?" asked Linton. "Why are we not able to create a budget that values our community and the people in it?"

It's also very emotional work and similar work around the country has resulted in police retaliation, Artu said.

"We need to take this seriously," said Artu, who noted that an example of what BIPOC members of the community experience every day was on display during a recent community forum when Police Chief Michael Fitzgerald refused to take off his sidearm during the discussion that was held on the Common.

For people with negative experiences dealing with police, that's not very reassuring and is not conducive to a discussion that is accessible to all, said Artu, who cautioned the Board that following a traditional process will not result in the change the community needs.

"We've seen it over and over again," said Artu. "We are still here. Let's think not just about training, but what safety means and how to grapple with the fact that the function of the police is to maim and kill. That is their tool in trade. ... As long as our police are trained with violence, we will continue to see violence."

Arnold characterized the police system as "the slave catchers," referring to the historical founding of many policing activities in the United States as patrols tasked with tracking down and returning enslaved people. Arnold said because of the history of policing, many people don't feel safe filing complaints about police behavior or policy. Some people who have complained have been met with violence, silencing and inaction.

Arnold also noted the police officers, including here in Brattleboro, are struggling with their own trauma, as evidenced by one former police officer dying by suicide, a current officer accused of domestic violence, and a community corrections officer being accused of sexual abuse.

"People on the force are experiencing extreme levels of trauma," said Arnold. "They're not even able to take care of themselves."

This is a failure of the system, she said, and if Brattleboro is serious about creating a community that is safe and transformative it has to utilize a process that is also safe and inclusive. Such a process would include child care for participants and payment for the facilitators and the committee members. Otherwise, said Arnold, the people most affected by policing can't afford to be involved in the process.

Instead, the process will be dominated by "white, cisgendered people giving their opinions about police brutality," said Arnold.

"It's not about us without us," said Linton.

Working within the system, said Linton, is a non-starter for people who don't trust the system to start with.

"Because we are in a predominantly white community, working with an all-white government including this [board], intentionally or unintentionally we are in a culture of white supremacy," she said. "It is white centered ... whiteness doing the same thing as always."

Artu contended that the Select Board, being in charge of allocating resources, establishing a committee and choosing the facilitators is "already conflict of interest No. 1."

"That's five people who are choosing the people who make the recommendations for the whole town ..." said Artu.

Board member Daniel Quip said he found merit in both proposals, and from them the Board can find a path forward that includes "wisdom" from both.

Board member Brandie Starr agreed with Quip, but said the process needs to be led by BIPOC and those who feel vulnerable.

"If we can't figure out it's time for white people to step aside and let this charge be led by people of color, I don't know what else there is to say," said Starr.

"Reading through both of these, they're not really contradictory," said Board member Ian Goodnow. "The next logical step is we take the best parts of both and merge them together into some beautiful thing with more community input."

"I would be happy to merge the two," said McLoughlin, though she said details about child care and payment will need to be worked out.

Wessel agreed, but he noted anyone sitting on the committee or wishing to speak in a public forum can't remain anonymous, though anonymous testimonies can be accepted by such a committee. Wessel also hesitated to endorse payment for facilitators and committee members.

"The town is built on volunteers," he said. "I am a little bit scared of the idea of entering into a situation that should be an open process and is now becoming a payment process. But maybe that's my lack of vision."

"People can't do this for nothing," said Starr. And while volunteerism has been "the way it's always been," it also limits the ability of some people to engage in the democratic process.

"Just because we've done it this way, doesn't mean it's the way it should be done," said Starr.

Shea Witzberger said there are assumptions in the proposal presented by McLoughlin that don't appear in the one presented by Lozito. The need for police is a presupposition in McLoughlin's proposal that needs to be discarded.

"It is not truly inclusive," said Witzberger. "Five white Select Board members doing it how we've always done it ... it's an illustration of the way town structures support white supremacy and it doesn't support an in-depth conversation about community safety."

The Board agreed to continue the discussion at its July 21 meeting.