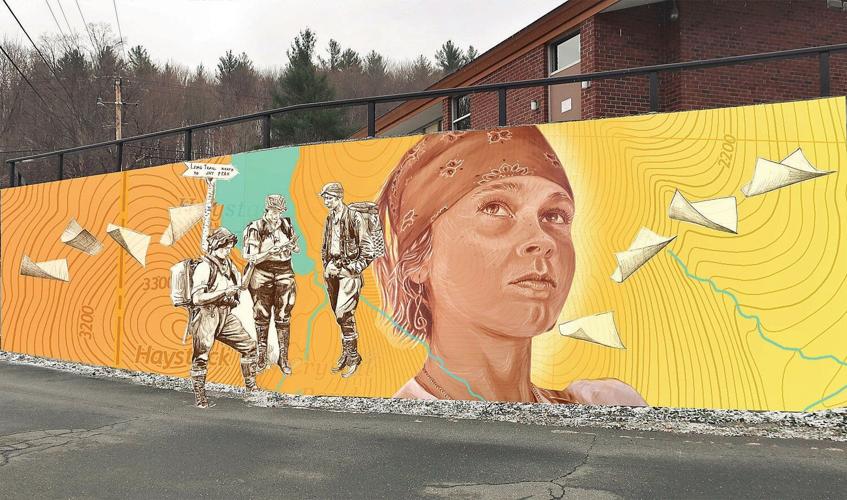 Lmnopi is proposing a mural about "the Three Musketeers," who hiked the entire Long Trail in 1927. 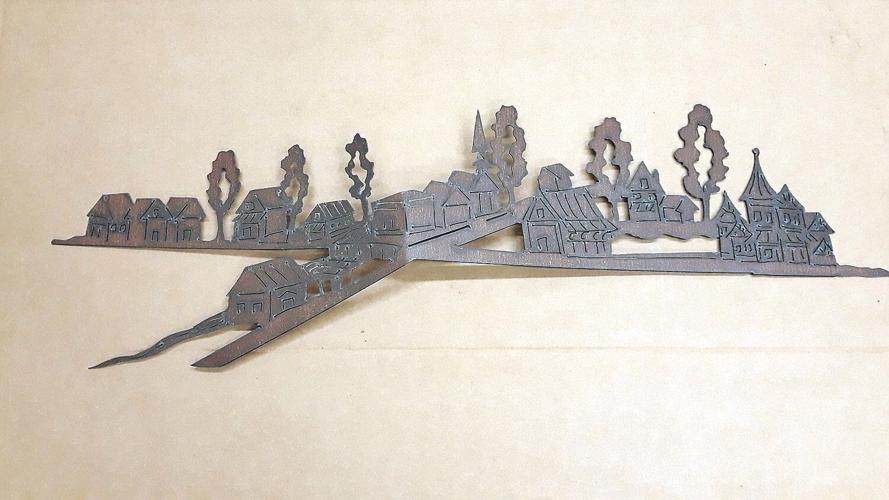 The Junkers are making a metal sculpture featuring different aspects of the Wilmington community.

Lmnopi is proposing a mural about "the Three Musketeers," who hiked the entire Long Trail in 1927.

The Junkers are making a metal sculpture featuring different aspects of the Wilmington community.

WILMINGTON — Community members are being given two choices for an art display to dress up the retaining wall behind The Richards Group on Beaver Street.

There's a mural of "the Three Musketeers," the first women to complete the 272-mile Long Trail hike, or a metal sculpture featuring aspects of the community including animals, buildings and the landscape.

The mural proposed by the Rutland-based artist who goes by the moniker Lmnopi features sketches of the three young women who hiked the Long Trail together in 1927.

"They're fun history. They're historical figures," Staloff said, noting one of them was a Vermonter who just graduated from Middlebury College before making the trek. "They attracted some attention because they didn't bring a male chaperone with them."

Staloff sees their hike as a tale of women's independence but also the independent spirit found in Vermont or "determination and not really following the rules." She said the committee selecting the semi-finalists was drawn to the faces of the women; the art was not only decorative but there was an emotional connection.

The mural would feature topographical maps of Haystack Mountain and Haystack Pond. A plaque would tell the story, which Staloff believes could draw outdoor enthusiasts and hikers. She said the artist wants to hire local assistants.

If the community decides against this project, Staloff plans to share Lmnopi's idea with other Vermont downtowns with Long Trail connections. The artist relocated to the Green Mountain State in 2018 and donated to a mural to the Rutland Food Center.

The metal sculpture is being proposed by the husband and wife team of Elise and Payne Junker of Chester. Staloff said the couple met at a craft fair in Wilmington more than 30 years ago.

"So they love Wilmington for that reason," she said. "They have a real tie here."

The Junkers make metal sculptures for different purposes including placement on walls, railings, chandeliers and gardens. They created the weathervane atop the Vermont Welcome Center in Guilford.

Their proposal features a historical building from the neighborhood that had been taken down before the town established the historic district. Staloff said the project would likely include a couple of iconic Wilmington buildings. She pointed at metal versions of the Stratton watershed, Haystack Mountain, and the Hoot, Toot and Whistle train. She said a moose's antlers would stick up over the railing and a bear would be walking downhill, inviting humans to do the same. She is unsure if children playing soccer will remain in the project.

Corten steel, which resists corrosion but is not rustproof, would be used. Staloff said it will have a brown color and stick out between 0.5 inch to 1 inch.

"After snowfall, I can see this being really beautiful with snow clinging to it," she said. "It's an outdoor sculpture designed to interact with the weather and the environment."

Voting can be done anytime at beaverstreetart.com. But Staloff encourages people to come see the proposals in person.

Sessions to look at samples of the work and vote are scheduled at the Old School Community Center Meeting Room during basketball games 10 a.m. to 2 p.m. Feb. 15, during the Wings Winter Break Family Extravaganza from noon to 3 p.m. Feb. 20, and from 5 to 7 p.m. Feb. 27. They will be viewed at Twin Valley Elementary School from 9 a.m. to 2 p.m. March 3 during annual Town Meeting Day. Staloff also will be getting votes from Twin Valley middle school and high school students.

Voting will take place through March 15, with a winner to be announced in the last week of March. Staloff said the goal is to get as much input as possible for the project that will be visible to many people.

The Richards Group granted permission to use the wall. The Vermont Arts Council provided a $14,000 grant, the Rotary Club of the Deerfield Valley pitched in $1,000, and a local patron has pledged to match funds collected in community fundraising.

The project is meant to integrate the Beaver Street neighborhood and the new community center into the downtown. That area is now incorporated in the designated downtown.

A committee — made up of Staloff, Janet Boyd, Angel Balch, Gretchen Havreluk, Sheila Osler, Fred Houston and Michele Doucette — sifted through 11 applications. Artists living in Vermont or within a 40-mile radius to Wilmington were invited to submit proposals.

"But we're really excited to have some samples of their work," she said. "It's giving us ideas for some other stuff we can do."

Local artists provided feedback on the proposals. Staloff said the project is site specific and the committee tried to be sensitive to having a historic downtown.

The metal sculpture could theoretically last forever or it could be removed in pieces and relocated or sold. The mural is expected to last between 15 to 20 years.

Staloff said it will cost more to prepare the wall for a mural than to paint it, and Stevens & Associates of Brattleboro agreed to provide engineering at a discounted cost. Artists will be paid for their work and materials.

The hope is to have the project completed by Old Home Week in July. But Staloff acknowledged "that's ambitious."