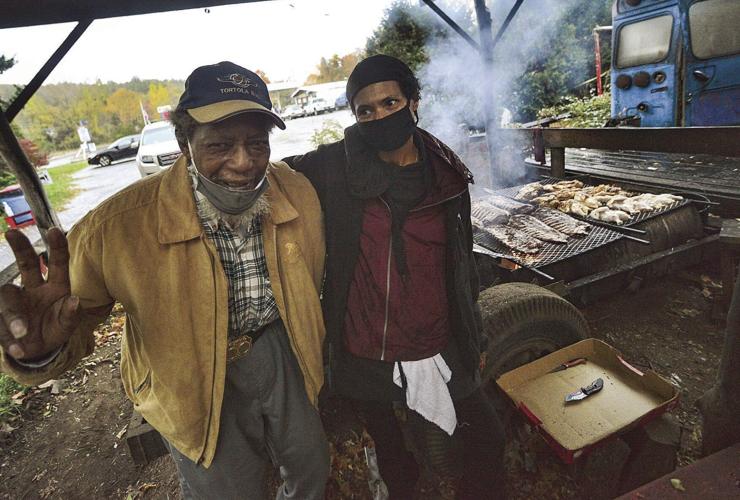 Curtis Tuff, owner of Curtis’ All American Bar-Be-Que in Putney, and his daughter, Sarah Tuff, who runs the day-to-day operations. Curtis Tuff died Tuesday at the age of 82. 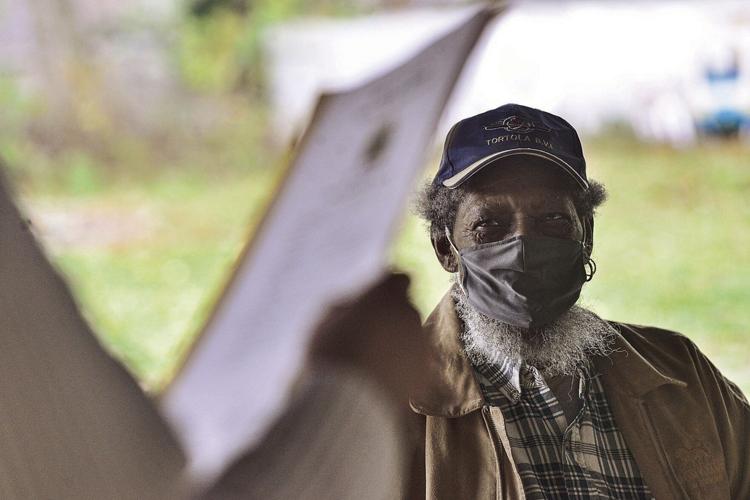 Curtis Tuff, the owner of Curtis' All American Bar-Be-Que in Putney, listens to a proclamation read by state Sen. Jeanette White, D-Windham, on Oct. 16, 2020. 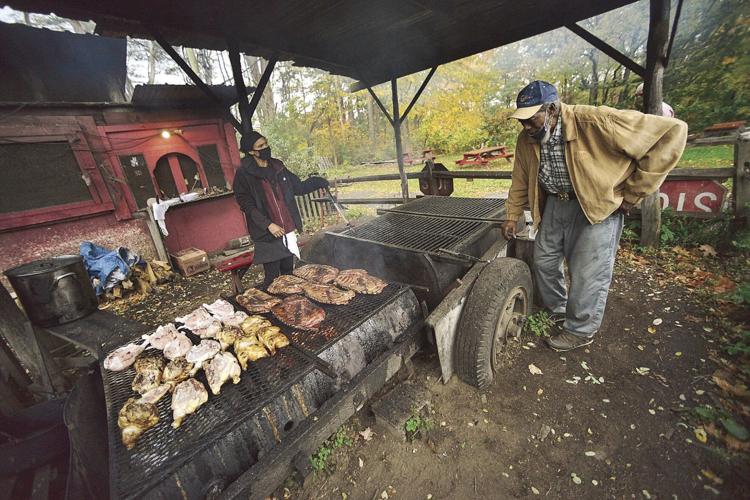 Sarah Tuff, who runs the day-to-day operations of Curtis' All American Bar-Be-Que in Putney, flips the meat on the pit as her father, Curtis Tuff, watches on Friday, Oct. 16, 2020.

Curtis Tuff, owner of Curtis’ All American Bar-Be-Que in Putney, and his daughter, Sarah Tuff, who runs the day-to-day operations. Curtis Tuff died Tuesday at the age of 82.

Curtis Tuff, the owner of Curtis' All American Bar-Be-Que in Putney, listens to a proclamation read by state Sen. Jeanette White, D-Windham, on Oct. 16, 2020.

Sarah Tuff, who runs the day-to-day operations of Curtis' All American Bar-Be-Que in Putney, flips the meat on the pit as her father, Curtis Tuff, watches on Friday, Oct. 16, 2020.

PUTNEY — The man behind Curtis’ All American Barbecue Pit, a local landmark, is being remembered as a friend of the community who served up tasty food.

On the business’ Facebook page, the family said Curtis Tuff died Tuesday morning in his sleep. He was 82.

“We appreciate everyone’s thoughts and prayers,” the post says. “Just during this time, we need time to mourn and we love you all.”

Tuff’s widow Christine Tuff, who handles the business end of the barbecue, said a lot of people have been reaching out and a memorial service will be held in the spring. The couple had been together for about 40 years.

“It’s like somebody cut my right arm off,” Christine said in a brief interview.

Tuff had chronic obstructive pulmonary disease and was on oxygen, she said, describing how his kidney started to fail and he was very ill in the last six weeks.

“Wherever you go people ask where you are from, you are almost guaranteed to be told, ‘Oh, you are from Putney. We always go to Curtis BBQ on our way up 91!’” the department said on Facebook. “Curtis was always known for his kind spirit and willingness to help those around him, and of course his famous BBQ!”

Chris Parker, chairman of the Vernon Select Board and food service director for the West River Education District, described Tuff and his family shaping who he is as a chef.

“Never did I imagine when I was an 18-year-old troublemaker, dating his daughter, that he would soon entrust me with his technique, tips, and business,” Parker said in a Facebook post. “He showed me that without your customers you have no business, take care of your customers and you will never struggle. He taught me that your staff is your biggest asset, take care of them and your customers will reap the benefits. He taught me what passion for the art was, and if you weren’t putting your heart into your art you were in the wrong business. Most of all he taught me that you work hard to provide for your family and you stop at nothing to give them the life they deserve.”

Tuff “touched so many lives and had so many friends,” Parker said, calling himself “lucky enough to call him family.” He thanked Tuff for sharing his wisdom.

“Curtis was one of those special people that are too rare these days,” said Rep. Mike Mrowicki, D-Windham-4. “A friendly, generous, accepting soul with a ready smile, who made the best of life, even in tough times. My heart goes out to his family for their loss and hope they take some solace seeing his was a life well lived, that brought comfort to others with good food served with a smile.”

Tuff was a neighbor of state Sen. Jeanette White, D-Windham District, for many years. She said she will miss “his morning greetings as we went out to get the paper, his soft chuckle, pork pie hat and stories.”

“The food was great, and the vibe at the bus was always friendly and kind,” she said. “When my kids were little, they’d run around and play with toys in the sand pile while we tried to catch up on grown-up talk. And I’d love looking around at all the different people who’d stop in for a bite — lots of Harley riders, many locals, leaf-peeping tourists, families with kids.

Tuff “made everyone feel welcome,” Balint said. “He represented Vermont at its best.”

Steffen Gillom, president of the Windham County chapter of the National Association for the Advancement of Colored People who was speaking as an individual not for the organization, didn’t know Tuff personally but met him once and went to get food from the business several times.

“I remember him distinctly because I am originally from the South so a boss of mine took me there to get food and he was very friendly,” he said. “I’m sad he passed away.”

Gillom remembered the grill Tuff used reminding him of the South and home.

“He represented a lifestyle that is appealing to Vermonters of color, who come here from other places,” he said. “He really highlighted how Black culture and the communal style of Black culture can impact a town. The communal spirit, I think, it sort of invigorated everyone despite their background and I think that as we continue to diversify as a state, I’m excited for that kind of energy to be entering into the state.”

Tuff started cooking barbecue in Putney in the 1960s after picking fruit between the local community and Tampa, Florida. He began making barbecue for parties and other events, and driving around in his blue bus, selling chicken at the former Windham College in Brattleboro and in Keene, N.H. He built a pit just off the highway in 1971, paid $1.50 for a license and has been cooking there ever since.

Mrowicki and White honored Tuff in October with a concurrent resolution that was approved by the Vermont Legislature.

“Curtis is a tradition,” Mrowicki said at the time. “People go out of their way to come see him and then they see the rest of the town. He has been a real treasure for a long time.”

While the food is great, most people come to talk with Tuff, White said at the time. Many were disappointed to learn this year that Tuff wasn’t able to work due to the coronavirus pandemic and his own health conditions.

His daughter, Sarah Tuff, and her fiancée are now tending the coals.

“I always feel like there is something I’m not doing,” Sarah said during the event honoring her father. “He’s got a touch I’ve yet to learn. It’s so easy for him. These are big shoes to fill. I feel honored that he is trusting me.”

At the time, Tuff said he was proud to have his daughter and her fiancée take over. He attributed his success not just to his self-taught knowledge of barbecue, but also to his own attitude toward people.

“It pays to be nice to people,” he said. “It doesn’t pay to walk around like the world owes you something. That’s the way I lived my life.”

Tuff “always said the customers have done him a huge favor,” Christine said in October. “He has been so humble and grateful about that.”