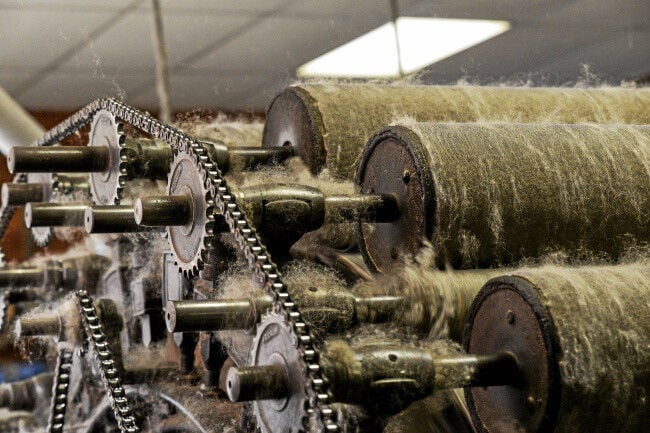 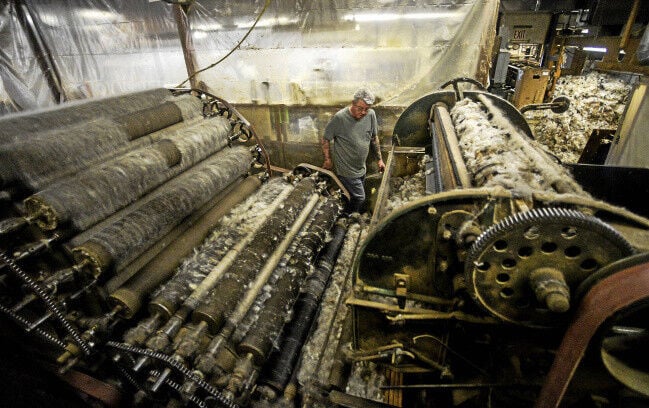 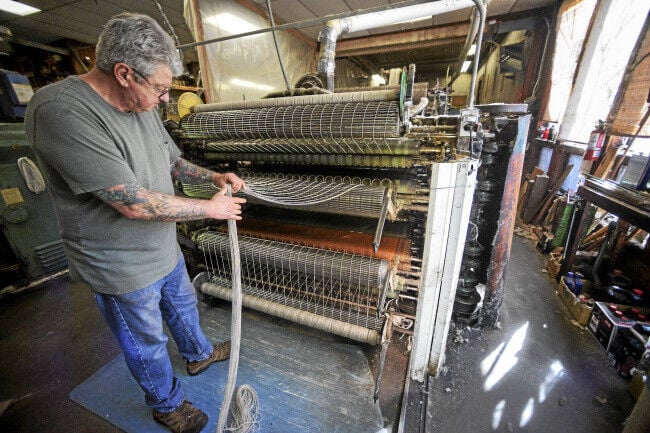 That's the 1916 Davis & Furber carding machine, known as The Card, at The Green Mountain Spinnery, a worker-owned cooperative in Putney that produces and sells both natural-fiber yarns and knitting patterns.

Laurie Gilbert maintains and operates The Card, as he has for the past 20 years.

"I believe in taking care of it," he said. "It's definitely not just a mechanical thing. I have to do a lot of preventive maintenance. Grease and oil, that's what the thing runs on. There are not a lot of sealed bearings — it's all old-school stuff.

"I grew up on a farm," he continued. "If something broke, you fixed it right away and kept on working. So when the machines break down, I apply what I think will work. There are so many problems every week. The other day, I fixed a machine by turning a part over and putting it back in. That meant we could keep up with production, and it didn't cost us anything."

Gilbert said he very rarely has the same problem twice, given the age of the machines. He also keeps handy the numbers of a couple of men who have lots of experience with this kind of machinery, and if he needs to call, "these fellas help me out."

Depending on what kind of yarn the customer wants, the carding machine may need considerable "finessing" to insure smooth processing of the blend of fibers at the required thickness.

Claire Wilson, one of the founders of Green Mountain Spinnery, said their carding machine came from Biddeford Textile Company in Biddeford, Maine.

"We bought it in 1981," she said, "when the textile industry was retooling and replacing their old machines with huge, computer-controlled machines. The Card had been working with synthetic fibers and needed a lot of adjusting."

The Spinnery received considerable help from people who had worked in the textile industry with machines like the Card.

"We were totally ignorant," Wilson said. "I went over to Harrisville Mill in New Hampshire every day for a week to work with Ray Phillips. He knew about all the mills and the people who sold parts. He had a network of information."

In early 1981, the Spinnery's founders, Libby Mills, David Ritchie, Wilson, and Diana Wahle, bought a former gas station at I-91 exit 4 in Putney, across the road from the Putney Inn. The station had opened just before the 1974 Arab oil embargo. Because people were not driving as much, they were using less fuel, and the station went out of business shortly thereafter. As soon as the Spinnery's founders bought the building, they immediately had additional space built on in order to accommodate the massive pieces of machinery.

"I had a mostly sleepless night before the machinery moved in," Wilson said, adding that the Spinnery opened in December 1981.

As part of the centenary celebration, the Spinnery is producing a special yarn and a special pattern.

"We had a couple of bales of fleece from Andy McMurry, a sheep farmer in Missouri," said Maureen Clark, who has worked at the Spinnery for 17 years. "It's Moorit wool, which is a brownish-red color. The sheep are also called Moorit. The '1916 kit' will include one or two skeins of the yarn, and a hat or mitten pattern from that period. We've been looking at images of knitwear from 1916."

Carding is the third of the six time-consuming steps necessary to transform raw wool or other fiber to yarn: scouring and drying, picking, carding, spinning, steaming, and finishing.

First, the raw fiber is washed, or "scoured" to remove dirt and natural grease (lanolin in sheep's wool). Anywhere from 50 to 300 pounds or more of fiber makes up a "lot." The fiber is soaked in hot, soapy water, then sent through squeeze rollers into a series of hot water rinses in basins until it is clean. The Spinnery uses a filtration system that captures the lanolin "sludge" from the wastewater. The greasy water is trucked to the Putney municipal wastewater treatment plant to be added to similar material. From there, it is sent away for incineration.

After scouring, the fiber goes into the extractor, "the oldest piece of equipment in our mill," as recounted in the Spinnery's book, "99 Yarns and Counting: More Designs from the Green Mountain Spinnery," published in 2009. "(It was) built in 1896 and acquired from the laundry room of the now-defunct Windham Hotel in Bellows Falls, Vermont." The extractor, as its name implies, works on the same principle as the spin cycle of a washing machine. The fiber receives one final hot-water rinse during the spin, after which it goes into an industrial dryer, and the scouring process is complete.

Next, the dry but jumbled mass goes through the picker, which opens and separates the "locks" of fiber. Each lock consists of a series of parallel fibers. At this step in the process, colors and other types of fibers may be added. The Spinnery keeps very careful records of its yarn "recipes," which allows it to reproduce colors and types of yarn again and again. An entire lot of fiber may be run through the picker two or three times. The final time, the fibers are sprayed with spinning oil to ease flow and prevent jams in the machines.

Now the fibers are ready for carding, a process described in "99 Yarns": "Picked fiber is added to the feedbox and conveyed to a series of rotating drums that blend the fibers into a web. This web is layered into the second half of the carding machine for further blending. Finally, the web of fiber is separated into 'pencil roving,' (thin wool strands) and wound onto four spools, each holding 24 continuous strands. Although pencil roving looks like yarn, it has neither twist nor tensile strength the carding machine can be adjusted to make thicker or thinner roving."

These spools of pencil roving are moved to the spinning frame (a 1947 Whitin Model E), where someone threads, by hand, the 96 roving ends onto the machine. How long the spinning takes, from a few hours to a few days, depends on the size of the lot. Placing bobbins of newly spun yarn in the steam box sets the twist. Once the yarn is steamed, it goes onto the plying machine, which, as described in "99 Yarns," "twists multiple strands of yarn in the opposite direction from their original spin. Varying the number of plies in a yarn (2-, 3-, or 4-ply) provides an additional way to control its strength and thickness." The plied yarn then goes to finishing to be put into skeins or onto cones. At last, the yarn is ready for sale.

The process of transforming the fiber is a long labor of love, said co-founder Ritchie, adding, "We can feel overwhelmed and thrilled at the same time. But we've been here 35 years, and we're still going. Demand is quite spirited right now."

Over half of Green Mountain Spinnery's production is custom work.

"When we go to sheep and wool festivals," Wilson said, "people who've had their yarns spun here stop by and show us what they've done with it."

"It's part of the localvore movement," she said. "A lot of people are blogging about it. There's a movement against 'fast fashion.' How much of our clothing is created overseas in dangerous conditions? People are becoming more aware of their purchasing decisions. They're drastically reducing their wardrobes. They're learning how to sew, knit, weave, and spin."

"We make yarn for more people in Vermont than ever," Wilson said. "We're not the only ones, but we were early, and we make quality."

Nancy A. Olson can be reached at olsonnan47@gmail.com.