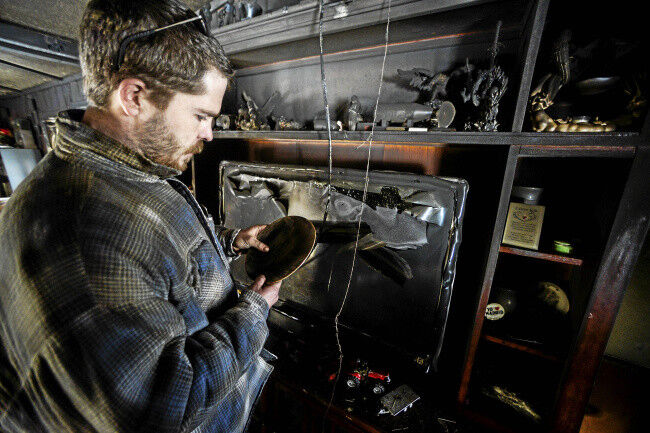 Shane Goldsmith whips off the soot from a dish that was in the living room. 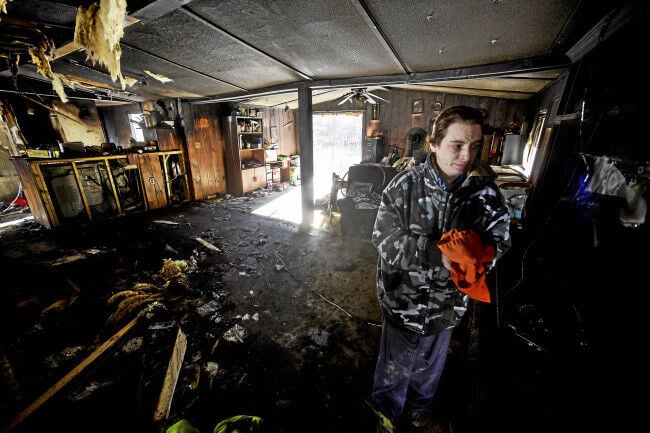 Stephanie Goldsmith tries to salvage what she can after an early morning electrical fire tore through her home in Putney on Thursday. 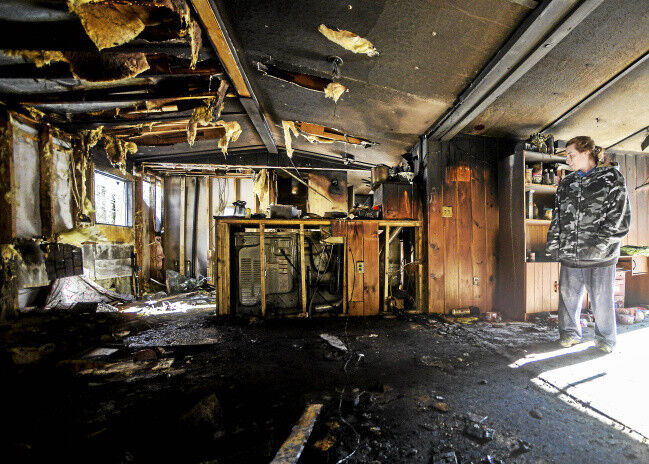 Stephanie Goldsmith looks over her living room where an early morning electrical fire tore through her home in Putney on Thursday, Jan. 28, 2016. No injuries were reported but two cats died due to the heavy smoke.

Shane Goldsmith whips off the soot from a dish that was in the living room.

Stephanie Goldsmith tries to salvage what she can after an early morning electrical fire tore through her home in Putney on Thursday.

Stephanie Goldsmith looks over her living room where an early morning electrical fire tore through her home in Putney on Thursday, Jan. 28, 2016. No injuries were reported but two cats died due to the heavy smoke.

PUTNEY — An infant's cry over a baby monitor may have been the very noise that allowed a family to safely evacuate a trailer fire that occurred Thursday morning, Jan. 28.

"We woke up to a fire in our living room," said Stephanie Goldsmith. "The fire wasn't that big when we first woke up, but once we got the kids and the dogs outside, it was huge."

Her husband, Shane, added, "It fully engulfed the living room and kitchen."

Stephanie hurried by the source of the fire that was in their living room, through the smoke to the other side of the trailer where her 3-year-old son, Shane Jr., and 12-month-old daughter, Christine, were in their bedrooms. At that time the fire was solely in the living room near a vacuum cleaner that Stephanie said she had left plugged in overnight. Stephanie, Shane, and their two children safely evacuated the home.

"The adult male occupant then re-entered the dwelling in order to rescue their pet dogs," stated a press release from the Putney Fire Department. "The adult male suffered a superficial burn to his face, smoke inhalation, a foot injury, and cold exposure to his feet. He was transported to Brattleboro Memorial Hospital by Rescue Inc. for evaluation and treatment as necessary."

The four family members and the dogs exited the home, but unfortunately two cats did not survive.

"We got everyone out but two animals, we lost our cats," said Shane. "They didn't burn, but they just passed from smoke."

Shane called 9-1-1 around 7:25 a.m., the Putney Fire Department arrived at the scene at 7:33 a.m., and two additional tankers were called in. Mutual Aid companies from Dummerston, Westminster and two ambulances from Rescue Inc. were also dispatched. The fire was declared "under control" at 08:01 a.m. after hose lines were stretched by firefighters into the kitchen and living rooms areas.

The press release also stated that Stephanie and Shane were in need of medical evaluation and care due to smoke inhalation and exposure. Their two children were uninjured. After Shane had been transported to BMH the remaining three family members were moved to the Putney Fire Department where they were met by representatives from the American Red Cross and Putney Family Services.

The children spent the rest of the afternoon with their grandmother, but when Shane and Stephanie returned to their home, they found their trailer had suffered significant heat and smoke damage throughout the remaining interior of the dwelling.

"Right now it's trying to just get what's salvageable out of there, which is what we're doing now, and sadly, our four dogs are being kept in the van," said Stephanie. "We're going to see if we can at least get our children's clothes out of there if they are not smoke damaged. But a lot of stuff my son just got for his birthday and Christmas — all of his toys are destroyed."

The Goldsmith family is now without their home, and they have lost many of their possessions to the fire. They were able to gather a few sentimental items, including the urns of their two older children who died in 2007 and 2010.

"Thankfully the things that I wanted most, we were able to get out, like my children's urns," said Stephanie. "My first son died of sepsis at 6-months-old and my second daughter was born too premature."

Stephanie expressed her great gratitude that her two children, husband and dogs survived the fire. She mentioned that all of the material belongs that were damaged are simply "replaceable."

"I don't really care about all that stuff," said Stephanie pointing to the appliances that had been pushed outside. "That stuff is replaceable, after I'll I've been through, all of that crap is absolutely replaceable. My kids and my family are not."

The fire was investigated by members of the Putney and Brattleboro Fire Departments, and was determined to be electrical in nature. Due to injuries to the occupants, a fire investigator from the Vermont State Police Fire Investigation Unit was notified and the circumstances surrounding the fire were reviewed.

Stephanie said they did not own any fire extinguishers and according to the Putney Fire Department, no smoke or carbon monoxide detectors were installed within the home.

"In the wake of the events that transpired during this incident, we would like to remind everyone as to the importance of installing and maintaining smoke and carbon monoxide detectors within their homes; and to never re-enter a fire or smoke filled environment once they have left," stated a press release from the Putney Fire Department.

"I don't have home owner's insurance, we have two car payments and two kids and my husband is the only one that works because I have depression and anxiety stemming from my two previous children passing away," said Stephanie.

Because the Goldsmith's home is not habitable, the Windham Foundation is providing a home for the family and four dogs for the next couple of weeks. In addition, food, clothing, and additional personal needs items were provided to the family by individual members of the Putney Fire Department, the Putney Diner and Putney Family Services.

"Everyone was here a lot quicker than we expected, and we want to thank everyone," said Stephanie.

The Putney Fire Department thanked the responding mutual-aid departments for their efforts, and the staff at the Putney Diner for their support.