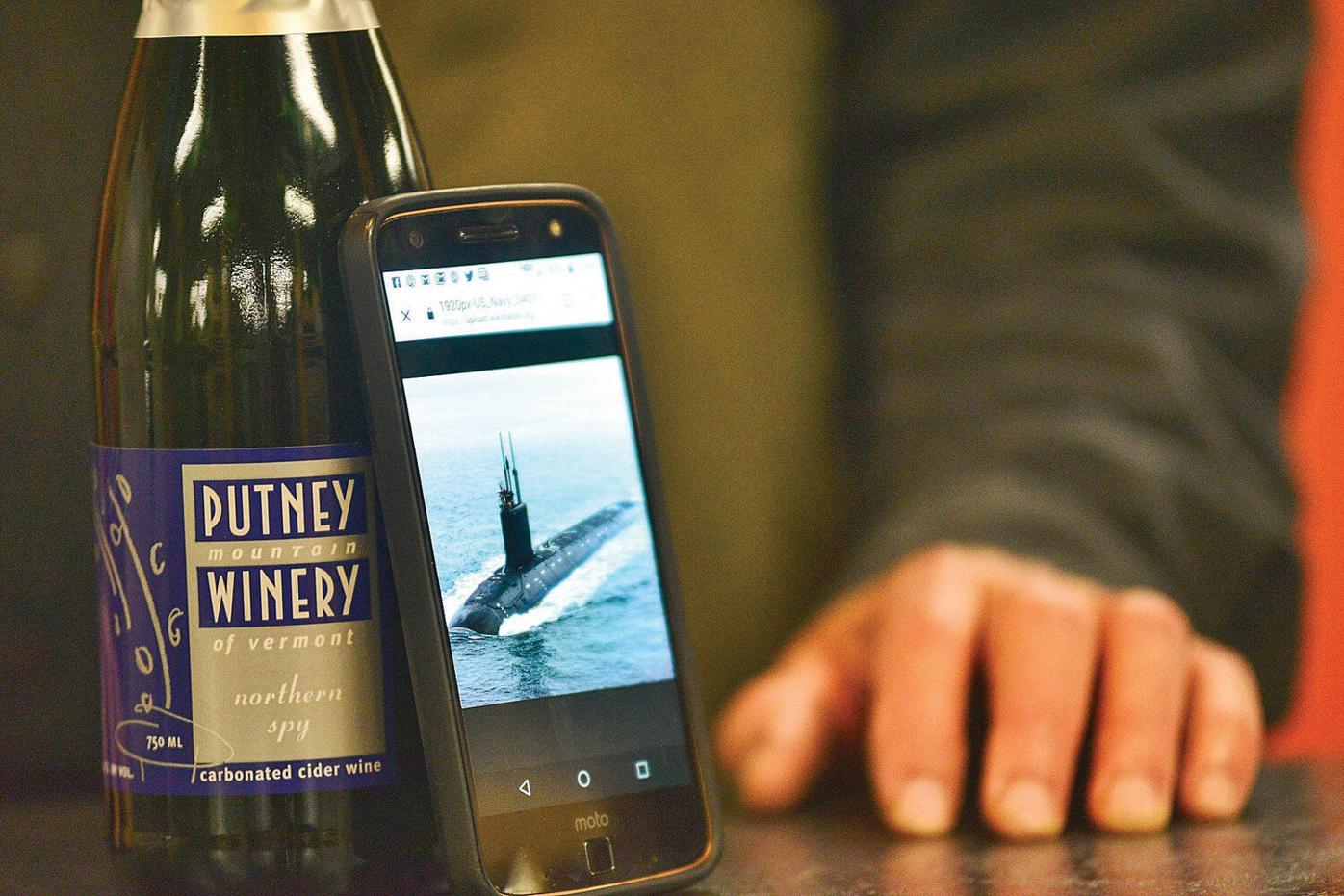 A bottle of Northern Spy, from Putney Mountain Winery, will be used to christen the USS Vermont this weekend. The cell phone shows a Virginia class nuclear submarine similar to the USS Vermont. 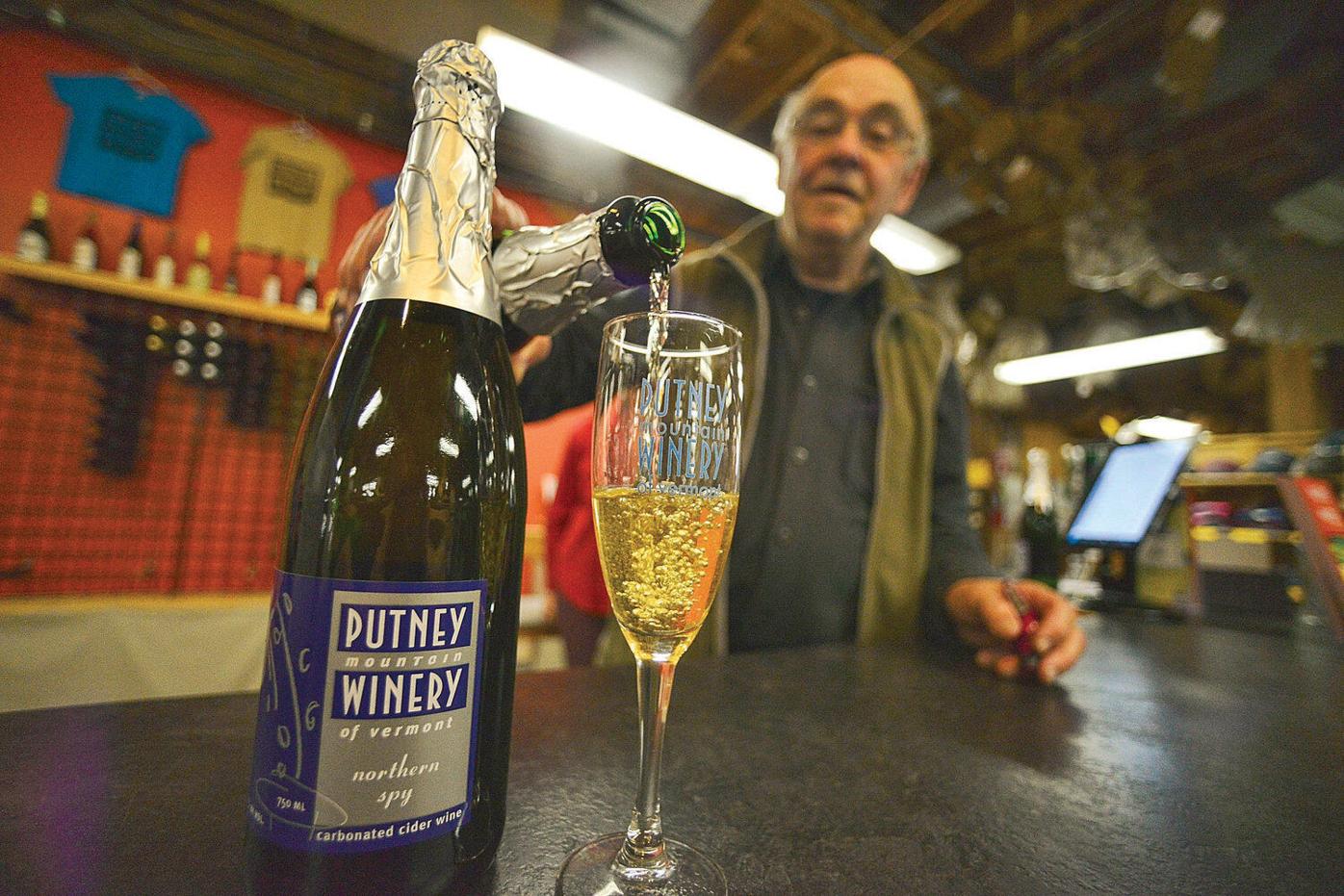 A bottle of Northern Spy, from Putney Mountain Winery, will be used to christen the USS Vermont this weekend. The cell phone shows a Virginia class nuclear submarine similar to the USS Vermont.

PUTNEY — When the USS Vermont nuclear-powered submarine gets formally christened this Saturday in Groton, Conn., it will be showered with a sparkling wine made in Putney from Vermont apples.

Putney Mountain Winery was selected to provide the symbolic bubbly by General Dynamics' Electric Boat division, which is building the nuclear-powered 'fast-attack' submarine, at a cost of $17.6 billion.

The wine is made entirely of Northern Spy apples, a crisp and tart, late-season apple, an heirloom variety that dates back to the 1840s, Dodge said. It's known as a "keeper."

Dodge said the winery was contacted by General Dynamics earlier in the year about providing a sparkling wine for both the christening and the reception for USS Vermont.

He said the winery shipped off a couple of test bottles to General Dynamics, and the Putney wine passed the bubbly and break test.

The key, Dodge said, was the wine bottle had to break successfully, and there had to be plenty of fizz and bubbles.

"We passed on both counts," he said, as he poured a sample of the golden-hued wine for visitors on Tuesday.

The winery has sent four cases of the wine to General Dynamics, although only two split bottles of the wine will be used during Saturday's ceremony, according to Jason Hubner, the winemaker at Putney Mountain Winery. The rest will be served to guests during a Friday night banquet and a Saturday reception after the main event, Dodge said.

Hubner said General Dynamics was very concerned the wine pass the bubbly test, because a South Dakota wine used to christen the USS South Dakota "was as flat as a pancake."

The small "split" bottles will be encased in netting so the glass splinters don't hurt anyone, or go into the ocean, Hubner said.

He said last year's wine from South Dakota was a big disappointment in the fizz department.

He said in 2016 then-First Lady Michelle Obama christened the USS Illinois with an Illinois wine that "exploded, there was so much splash."

"Putney Mountain Winery — Charles and Jason — have been great to work with," said Rose.

Dodge said the wine gets its bubbles from a carbonation process, that injects carbon dioxide into the apple wine at a cold temperature.

The Northern Spy wine is popular for weddings and other celebrations, he said.

Champagne gets its fizz when sugar and yeast is added, and the wine is then immediately bottled, Dodge said. Dodge said he tried the Champagne method of adding the bubbles, but the apple wine lost its distinctive flavor and tasted like the traditional grape-based Champagne.

Dodge and his wife Kate founded Putney Mountain Winery in 1998 at their home, and the winery is one of the fruit-only wineries in New England. Dodge, a retired professor of music at Dartmouth College, grew up in Iowa. His father, he said, was a horticulturist at Iowa State.

He started his winery after making wine at home. The winery now produces wines out of apples, ginger, blueberries and black currants, cranberries and maple syrup. It also makes liqueurs and apple brandy.

The Dodges don't grow any of the fruit they use to make their wines, cider, liqueurs and brandy, but buy the fruit from regional fruit farmers, including four orchards in the region: Scott Farm in Dummerston, Reed Miller of Dummerston, the Dutton Farm in Newfane, and Alyson's Orchard in Walpole, N.H.

The ginger comes from a farm in Amherst, Massachusetts, and maple, rhubarb, strawberries, raspberries, cranberries and black currants come from local farmers.

While the fruit comes from farmers, the winery processes all the fruit on site at its location in the back of Basketville on Main Street in Putney, Dodge said.

The Dodges plan on being in Groton on Friday and Saturday, he said.

The submarine is the third USS Vermont, and it joins two other submarines with Vermont connections, the USS Ethan Allen and the USS Montpelier. The contract for the USS Vermont was awarded to General Dynamics Electric Boat division in 2014, and the submarine, which can remain submerged for up to three months, is expected to be commissioned by 2019.

The submarine, which will be able to launch Tomahawk and cruise missiles, will be 377 feet long, with a 34-foot diameter hull. A total of 135 officers and crew will eventually be on board.

He said Vermont food is served during the banquet and reception, he said.

"We never heard back from them," he said.