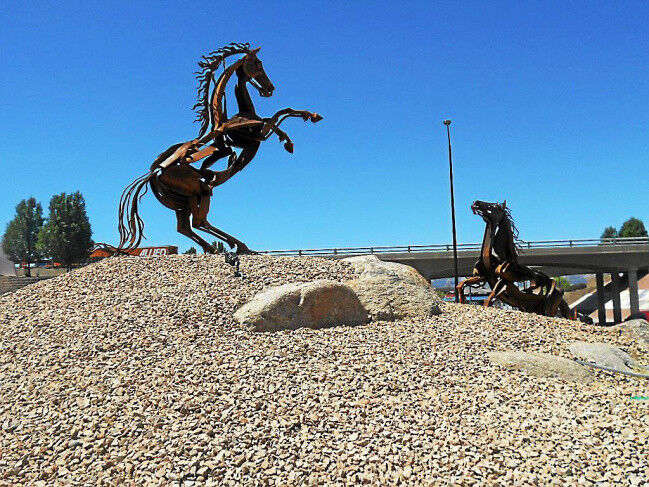 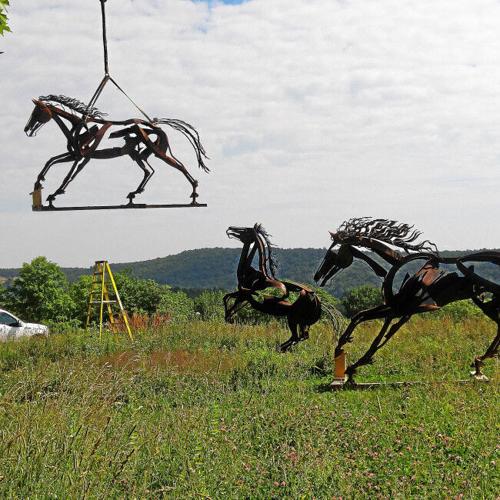 A steel sculpture created by Joe Fichter is moved from Putney to Grand Junction, Colo., where it is now on display. 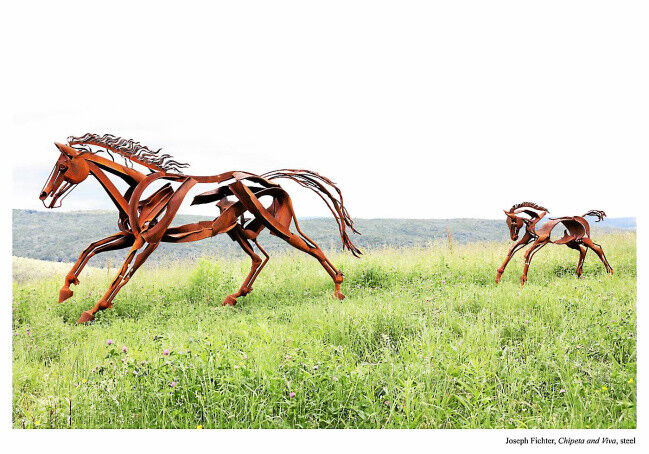 Chipeta and Viva, steel sculptures created by Putney's Joe Fichter, cavort in a field in Putney. 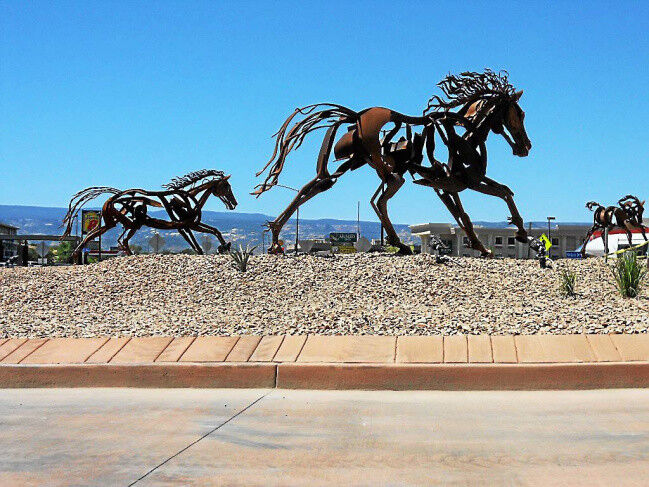 A steel sculpture created by Joe Fichter is moved from Putney to Grand Junction, Colo., where it is now on display.

Chipeta and Viva, steel sculptures created by Putney's Joe Fichter, cavort in a field in Putney.

PUTNEY >> A favorite walking loop in Putney, known for its sweeping views and natural beauty, has also provided artistic excitement and inspiration over the past year.

In an expansive hilltop pasture, steel sculptor Joseph Fichter has been assembling a growing herd of larger-than-life wild horses; first three — then four, five, and finally six. On July 5, these monumental sculptures were hoisted by crane and loaded onto a 51-foot flatbed truck to begin their journey west, bound for Grand Junction, Colorado, where they are now permanently installed in two roundabouts on Horizon Drive, the gateway to the city from Interstate 70.

The six sculptures were commissioned by the Horizon Drive District, a Colorado business improvement organization that partnered with the city of Grand Junction and the Colorado Department of Transportation. An international call for equine artists was issued, with the goal of creating lasting artistic images that would brand the city and the Horizon Drive Corridor. About 120 equine sculptors responded and Fichter's proposal for the sculptures was chosen in November 2014.

The horses, which weigh up to 3,500 pounds each, are made of new and used I-beams, angle iron, steel plate, and steel pipe. Fichter cut, sheared, bent and welded, capturing the motion, grace, strength and spirit of the equine form.

"I thrive on the new discoveries I find in each piece of metal."

He honed his welding skills many years ago working on submarines for the US Navy before turning to sculpture as a way of life.

"The work that comes out of my studio is built like a submarine," he says of the horses. His deep respect for the material guides his working process, "a marriage of a compulsion to control and a celebration of the spontaneous," and results in the originality of each horse.

For the past 16 years, Fichter has focused his work on welded and forged horse sculptures. Twenty years ago his wife, Laurie, an avid and accomplished equestrian, shared her desire to build a barn and introduce their three children to horses. Fichter readily agreed, provided half of the building would become a sculpture studio. They built the horse barn and sculpture studio and Fichter initially spent most of his time in his workshop. However, it didn't take long before he was feeling envious.

Soon Fichter had a horse, too, and was spending enjoyable hours trail riding with his family. At the same time, he developed a fascination with the beauty and strength of horses in motion and a keen eye for their muscles at work. With an investment of carrots and apples, the family horses lingered outside the tall south-facing, floor-to-ceiling windows of his studio and became willing models for his sculptures, now numbering over 40 life-size or larger horses.

The six wild horses that headed west were installed in the center of two traffic circles, landscaped to include a raised mesa and recessed creek bed. Motorists circle them as they enter Grand Junction. Westminster West resident, Richard Ewald, mused, "Some of them will be seated, no doubt, in Broncos, Rangers, Mustangs and, possibly, vintage Colts and Pintos."

Fichter has been a sculptor for over 40 years. He studied art at Antioch College, Ohio, and City and Guilds of London Art School, London, England. He was the sculpture and drawing teacher and Arts Department Chair at The Putney School from 1987 to 2013 and also taught welding and fabrication skills in adult education programs.

His sculptures are part of private and public collections in the United States and abroad, including Sierndorf Castle, Sierndorf, Austria, and the Vermont State Police headquarters in Williston. His work is pictured and described in detail at www.josephfichter.com.

Carolyn Olivier is a regular contributor to the Reformer. She can be contacted at carolyn.olivier@gmail.com.