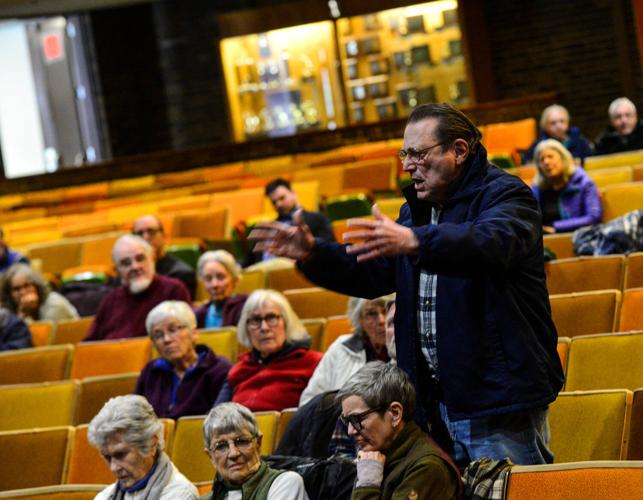 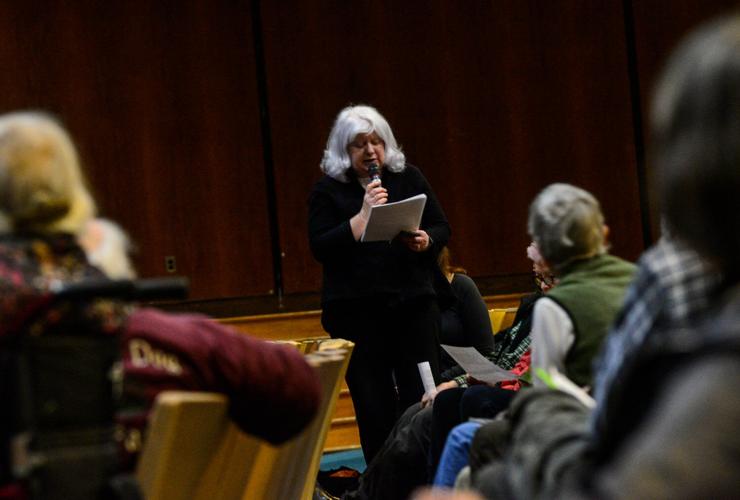 Patricia Whalen of Westminster, a retired Vermont family court magistrate, reads a statement against the proposed administrative merger under Act 46 of the schools in Westminster, Grafton and Athens. 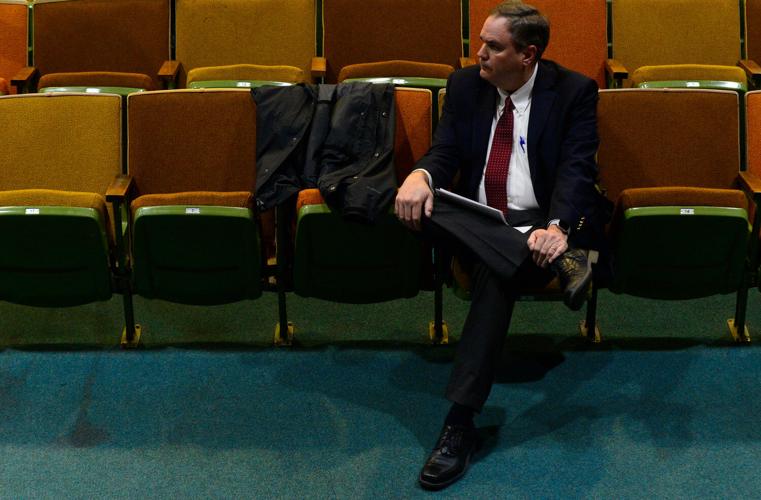 Dan French, the Vermont secretary of education, sits alone in the front row of the Bellows Falls Union High School auditorium Wednesday night, listening to arguments against the forced school merger of Westminster, Grafton and Athens. The three towns ultimately recessed the organization meeting, which French had ordered. 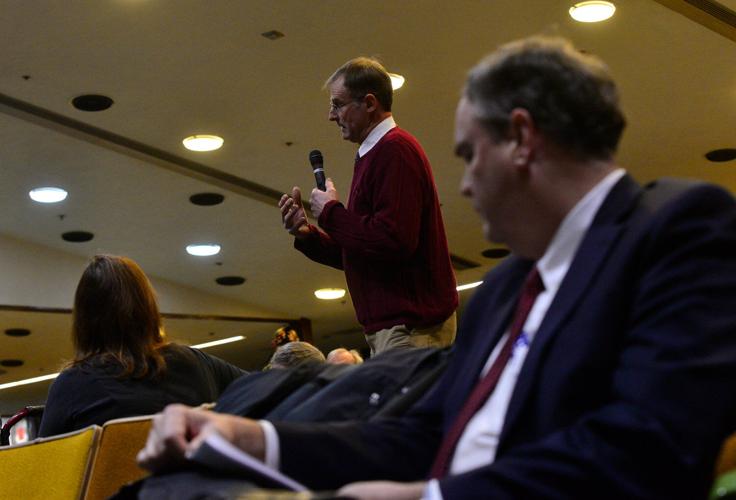 Donald Capponcelli of Athens, red sweater, makes a point Wednesday about how the school communities of Athens, Grafton and Westminster were working cooperatively before Act 46 as Vermont Education Secretary Dan French, foreground, listens

Patricia Whalen of Westminster, a retired Vermont family court magistrate, reads a statement against the proposed administrative merger under Act 46 of the schools in Westminster, Grafton and Athens.

Dan French, the Vermont secretary of education, sits alone in the front row of the Bellows Falls Union High School auditorium Wednesday night, listening to arguments against the forced school merger of Westminster, Grafton and Athens. The three towns ultimately recessed the organization meeting, which French had ordered.

Donald Capponcelli of Athens, red sweater, makes a point Wednesday about how the school communities of Athens, Grafton and Westminster were working cooperatively before Act 46 as Vermont Education Secretary Dan French, foreground, listens

WESTMINSTER — Resistance to the forced Act 46 administrative merger of Westminster, Grafton and Athens' schools continued unabated Wednesday night. With Education Secretary Dan French sitting in the front row, dozens of residents of the three Windham County towns agreed to recess the organizational meeting of the proposed new elementary school union district. They want a legal opinion on the already existing contract between the Grafton and Athens school boards.

Athens School Board Chairman Harold Noyes asked the group to recess the meeting after about an hour of often-contentious discussion so that the office of Attorney General T.J. Donovan could give a legal opinion on whether the state has the power to void the already existing school merger contract between Grafton and Athens. The two tiny Windham County towns had merged their elementary schools about 10 years ago, and since then have operated a joint school in Grafton.

Stephen Fine, a retired Athens lawyer and member of the Bellows Falls Union High School Board, was one of several people who took pointed exception to the forced merger under Act 46, which was adopted by the state Board of Education on Nov. 30, 2018. The proposed merger is not expected to save the school districts much money — an estimated 1.4%. But under the merger, a portion of Westminster's larger tax burden would be shifted to Grafton and Athens.

More than once, a speaker noted that participation in the meeting "is in no way intended as an affirmation of the legality of the State Board of Education's Report and Order on statewide school merger decisions" issued on Nov. 30, 2018. Residents were afraid that even attending the meeting, which had been organized by French, would send the message they were giving up their fight against the forced merger and their lawsuit.

Fine, a former Athens town moderator, immediately challenged French as he tried to open the meeting, and French repeatedly ruled Fine out of order.

Westminster resident and retired Vermont family court judge Patricia Whalen was applauded when she said the towns had been "coerced to be here tonight under threat by the state Board of Education.

"That a state board would act in this manner towards its citizens is an outrage," said Whalen, who ended her legal career acting as a judge at the International Criminal Tribunal hearing war crimes in Bosnia-Herzegovina.

"The three towns here tonight have worked diligently and lawfully to preserve decision-making for their voting public," she said. "This has been stripped from us by the arbitrary and capricious acts of the state Board of Education which are not supported by the constitution of the State of Vermont. We preserve our right to dissent," said Whalen to applause.

Others urged the voters to take a stand against what they viewed as an illegal power grab by state education bureaucrats, rather than elected officials.

"I'm dismayed the state Board of Education has not gone with the spirit of the law," said former BFUHS member Donald Capponcelli of Athens. He said the three school districts were already meeting the goals of Act 46. "We are a highly functioning supervisory union," he said.

David Clark of Westminster, chairman of the Windham Northeast Supervisory Union, and a member of the Bellows Falls Union High School, said the towns' rejection of the imposed merger represented "an epic struggle for democracy," and to let an un-elected state agency to overrule the will of the people "was a very dangerous precedent."

All three towns had voted in 2017 to reject a proposed merged elementary school district, while its normal education partner Rockingham, voted in favor of a merger. Noyes, the Athens School Board chairman, said the state did not have the power, under the U.S. Constitution, to cancel the towns' contract.

It was a lively discussion, but there was unanimity in fighting the forced merger. Fine at one point suggested adjourning the meeting, but that produced a discussion that a recess was a better legal strategy, given pending Act 46 deadlines. Ironically, the forced merger seems to have created a strong bond between the three towns, as evidenced by the repeated unanimous votes on every issue. All three school districts are part of a lawsuit of about three dozen towns that are challenging provisions of forced Act 46 mergers.

After the meeting, French, the education secretary, was non-committal about what would happen next to the rebelling school districts and the legal issue raised by Noyes.

Both he and Major, who is chairman of the Westminster School Board, said the Legislature is considering action that would give some towns an additional year to work out the differences. The House and Senate bills are currently in conference committee, French said.

Contacted on Thursday, attorney Ines McGillion of Putney, who is one of the lawyers representing the protesting school districts, said another preliminary ruling is expected on Friday.

"Judge Mello's last scheduling order indicated he would try to rule on the State's motion to dismiss claims in the complaint by tomorrow," McGillion wrote in an email. "We anticipate a ruling on April 12th or soon thereafter," she said.

McGillion said Mello also indicated at oral argument that he would rule on two of the causes of action as a matter of law. Merits briefs on cross-motions for summary judgment are due April 30, responses to the motions are due May 17, with argument scheduled for May 29, she said.

"We will only be able to evaluate the next steps in the litigation after receiving the ruling. To date, no appeal has been filed. Either party will of course have to consider an appeal of an adverse final ruling," she said.