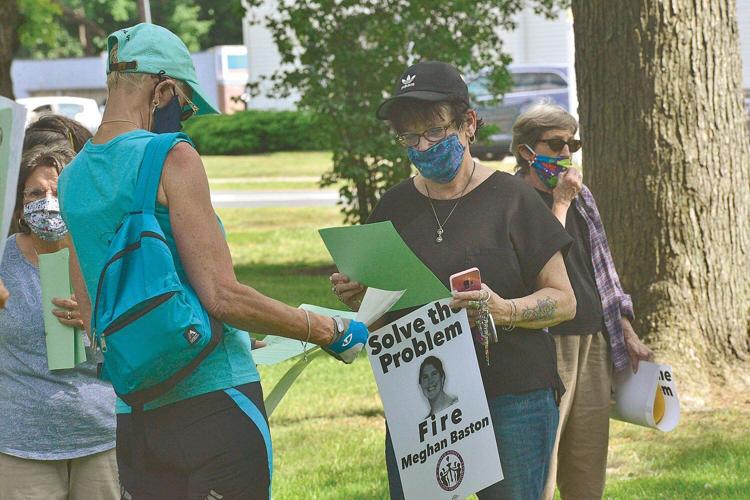 KRISTOPHER RADDER - BRATTLEBORO REFORMERPeggy Partridge, a former employee at the Brattleboro Retreat, in Brattleboro, Vt., holds a sign that says fire Meghan Baston during a press conference at Common on Thursday, June 4, 2020. 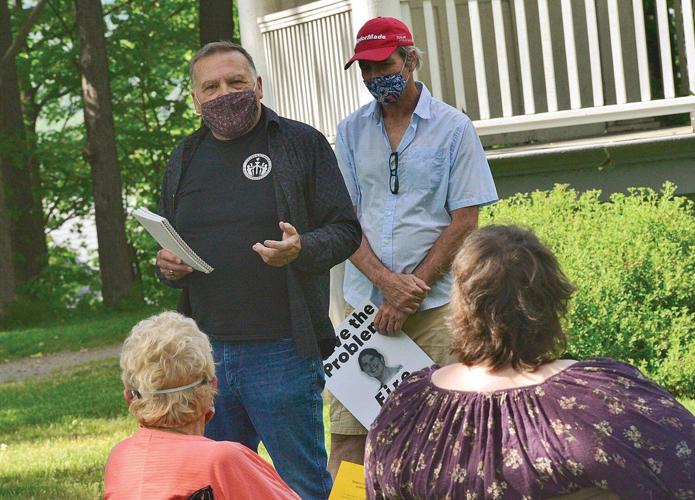 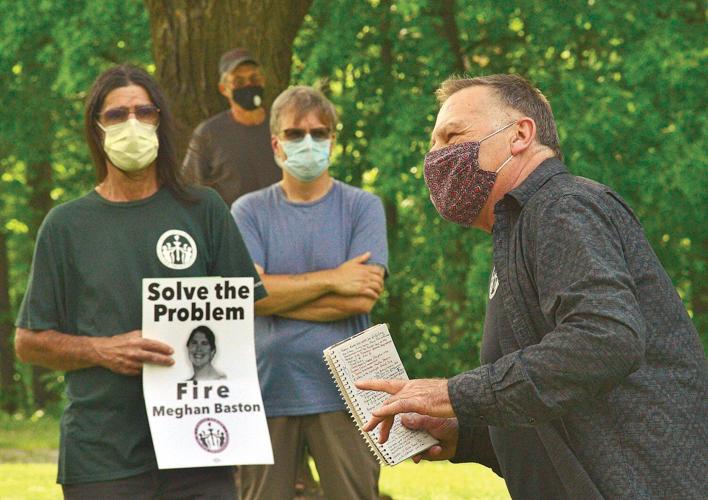 KRISTOPHER RADDER - BRATTLEBORO REFORMERPeggy Partridge, a former employee at the Brattleboro Retreat, in Brattleboro, Vt., holds a sign that says fire Meghan Baston during a press conference at Common on Thursday, June 4, 2020.

BRATTLEBORO — Employees at the Brattleboro Retreat are planning to picket after two union officials were fired.

Sy Creamer, president of Unit 1 of the United Nurses and Allied Professionals Union, said the psychiatric and addiction hospital is "a great place" with "great services."

"It's the administration that needs to change," she told the Reformer after a news conference Thursday at the Common. "We just want to provide positive patient care."

Creamer, who was fired from her position as a registered nurse in the Retreat's admissions department this week, said she hopes to be reinstated. Disciplinary actions taken in retaliation for union activity violate a section of the National Labor Relations Act, states a news release from union members.

Creamer was on administrative leave since May 4 while under investigation by the Retreat for a charge of violating the Health Insurance Portability and Accountability Act, which is aimed at protecting patient privacy. She said she forwarded an email to herself and a union vice president, and it contained a patient ID number but no patient names or personal health information.

The potential for losing her Retreat email account worried Creamer so she forwarded the email to her private address, states the release. She said she did not know that using a patient ID number in a private email to herself could be looked at as a violation of the privacy law.

Creamer forwarded the emails because Retreat officials were telling media outlets for weeks that the hospital was not taking any out-of-state patients during the coronavirus pandemic but she knew that was not true and the email would serve as evidence, according to the release. She told the Reformer she is aware of five patients who came from out of state during the pandemic.

In a statement, the Retreat said "a very small number of patients from out of state have been admitted when they had no other options for care and had been medically cleared of COVID-19."

Winston Salisman, vice president of UNAP Unit 2 at the Retreat, was fired on Nov. 25. Working with the state to become a foster parent, he was connected with a child who had a history with the Retreat, states the release.

"He immediately notified the administration at the Retreat of the situation, and asked for their input," states the release. "When the foster child was placed with his family, Salisman was immediately fired for violating Retreat policy."

The Retreat said Salisman was urged to contact the hospital's compliance office and check human resources policies before going forward with plans to foster a child he was in contact with at the hospital. But he did not do so, and violated a policy in the collective-bargaining agreement about maintaining "appropriate patient-staff boundaries."

Union members said UNAP Unit 2 Vice President Ed Dowd was "relieved of duty" in April, two weeks before he was to go on medical leave, because members of the administration did not like his tone in response to one of their emails.

"Prior to that, Dowd was improperly disciplined and threatened with termination for exercising his legal rights as a union steward," states the release. "He won his case in arbitration."

Dowd is still an employee at the hospital, according to the Retreat. The hospital said he was granted request for a leave of absence, and a dispute was settled by the union and Retreat prior to an arbitration ruling.

Creamer said there is a "double standard" at the Retreat — members of the administration have no consequences for their mistakes but the same is not true for frontline workers and union members. She counted nearly 20 grievances against the administration, which she said is more than the union has seen in its entire history and more than all of the other hospitals represented by her union combined.

Pointing to a lawsuit recently filed against the Retreat by a former nurse manager, Creamer said managers made jokes and laughed about a union officer's genitals.

"There has been no indication that any disciplinary action has been taken toward those administrators, or that the matter was even investigated," she said in the release. "Union members are routinely fired for much less."

Union members claimed the Retreat's Board of Directors have ignored concerns.

The Retreat said it is "disingenuous for certain individuals to bemoan a grievance caseload burden that they created. The union grieves nearly every disciplinary action and termination that occurs at the Retreat, regardless of the merits. Egregious policy violations, insubordination, job abandonment, and unsafe patient care have resulted in disciplinary actions and terminations. The Retreat is committed to full accountability on the part of all employees at every level of responsibility."

The Retreat said hospital officials usually refrain from commenting on personnel matters but felt compelled to respond and correct the record.

Creamer's union informed the Retreat that she will continue as union president, and the Retreat has told the union it will recognize Creamer as president but "her professional misconduct has disqualified her from being an employee at the Retreat."

The Retreat said her emails included "unique identifiers and other confidential clinical information about patients."

"This violation was exacerbated by the fact that the private patient information was forwarded for self-interest, and was not related to enhancing patient care," the release stated. "The public comments made by Ms. Creamer about her termination indicate a total disregard of Retreat confidentiality policies, her responsibilities as an RN, and patient trust. It's in situations like this that we must ask: how would each of us feel if a family member's private health information was so egregiously and unethically handled?"

The hospital said its "future sustainability ... hinges directly on our collective ability to continually raise our standards of performance to allow us to best serve the needs of society's most vulnerable citizens. Sadly, there are some who are not so committed to the Retreat's patient care mission."

In the hospital's statement, Board of Directors Chairwoman Elizabeth Catlin is quoted as saying that the board has full confidence in CEO Louis Josephson and his team including Chief Nursing Officer Meghan Baston.

On Thursday, union members called for the termination of Baston and Josephson. They announced they would be picketing for their removal on Mondays in front of the Retreat.

Jack Callaci, union representative, pointed to what he considers to be a high turnover rate to show frustration among staff. Robert Smith, interim president at Unit 2, said 335 workers have left since January and more than 50 percent of staff have left since 2018.

On Tuesday, the Vermont State Employees' Association's Board of Trustees voted to issue a statement of support for "the beleaguered workforce at the Brattleboro Retreat, who continue to struggle with a hostile employer, who they allege is repeatedly violating their fundamental employee rights."

Tim Mayo of Brattleboro, who works on a per-diem basis in the school and inpatient units at the Retreat, told the Reformer he came to the press conference to support Creamer and other union leaders who have been "grossly mistreated" by the administration. He said the first negative action by administrators involved "sweeping changes" to scheduling about two years ago.

"A lot of people left as a result," he said.

Mayo is unsure what will come of the picketing. He said if the Retreat went into receivership as a result of its financial issues, a judge in bankruptcy court might require some changes.

Callaci noted that the state provided additional funds to the hospital in December and in April to help keep it going.

Smith also called for changes in policy for disciplinary action, saying that the administration is currently "judge and jury" and many workers feel targeted.