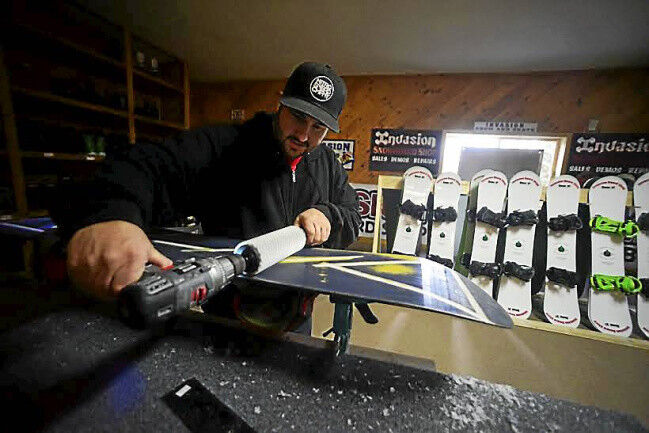 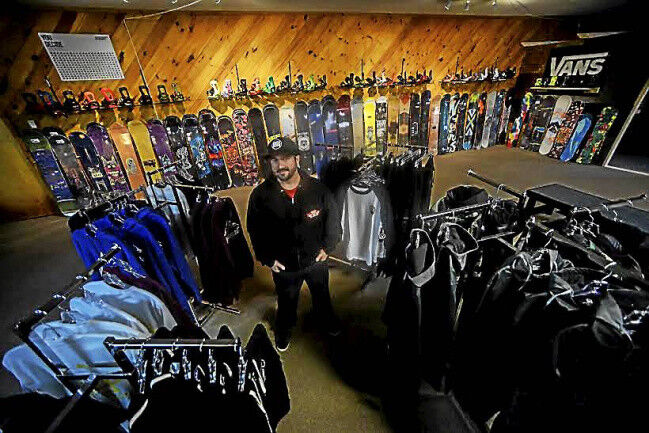 WEST DOVER >> On the heel edges of what owner Pete Ripley called his "most optimistic year," Invasion Snowboard Shop has moved into a bigger location.

Invasion was housed upstairs at a Dover ski shop after moving from locations at Manchester and Stratton. Then it was brought to a different building in between Dover Bar and Grill and the Mount Snow Marketplace. But more space was needed as the business continued to grow.

"When this became available, I jumped on it," Ripley said behind the counter at the new site at 201 Route 100 in West Dover. "I couldn't fit all the lines I wanted to carry in the location I was in anymore."

Last season ended up being Invasion's best, financially speaking. The shop is known not only for its large selection of brands and lines but as a place to talk about conditions at the mountain and the sport in general.

While the spot is not too far from the last one, the building is roughly three times its size. Now, the shop is one of the first in a line of ski and snowboard shops that visitors pass when they're driving to the ski resort at Mount Snow. Being next to 7-Eleven brings in plenty of traffic, too.

The increased space allows Ripley room to display more products. He also needs the space for a second dog, Enzo, who is quickly becoming acquainted with the shop and all its customers. Regulars already know Dolly, the original "shop dog."

But then there's improved visibility and parking at the new location, where Ripley hopes to host outdoor tent sales and events.

Last season saw closures of several snowboard shops around the United States. Ripley attributed that to the weather on the West Coast, which he said "we're getting a taste of" now.

"You just got to be positive," he said. "I think we're the most southern resort open right now so if I was anywhere south of here, we'd be having a much harder time."

To stay on top of the industry, Ripley said he listens to what brands the kids and customers want to ride and wear. He tries to snowboard as much as possible, giving him a chance to interact with other riders.

A shop team made up of Rory Bruder, Kevin Raksnis and Jake Gaudet is also helpful.

"They tell us what's going on and their ideas of what to carry. We take that advice strongly," said Ripley. "They're out there everyday. They really have a lot of positive input on what should be going on in the shop."

An event around vintage snowboard collecting is scheduled at Invasion on Jan. 24 from 10 a.m. to 4 p.m. The idea is to trade, sell or talk about boards with some history behind them.

Walls of the shop are decorated with snowboards dating as far back as 1988. But the event could see boards brought in from as early as 1979.

Mount Snow and the staff that builds jumps and rails for terrain parks at Carinthia every winter have spent the better part of a decade "doing an amazing job," Ripley said, providing his shop with a big crowd to cater to. Because of that and a list of nearby resorts not being open yet, he thinks Christmas vacation will still see an influx of visitors.

He hopes people think of Invasion as a snowboarding hub and a place where people can go to get anything they need for riding.

The product line has approximately doubled. New brands are now available there in addition to those that did well previously. Besides snowboards, there's clothing, boots, helmets, skate boards, stickers, wax and more.

Looking back at the shop's beginnings nearly 12 years ago, Ripley said he did not want to just open a shop where people would come in and leave just as quickly.

"It's great to see that people hang out. On the way back from the hill, even if they don't need anything, they'll stop in and just talk about their day and hang out for awhile," he said. "There's not really high pressured sales here."

Ripley was happy to report local riders coming in and making purchases even though they weren't receiving full paychecks yet. His goal now is to grow in the current location and get out on the hill as often as he can.