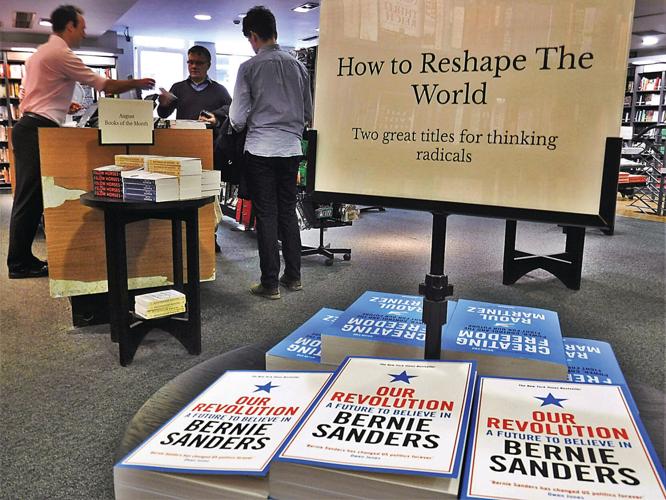 Vermont U.S. Sen. Bernie Sanders' "Our Revolution: A Future to Believe In," is displayed prominently at Dublin's Hodges Figgis, Ireland's oldest and largest bookstore and a landmark in James Joyce's celebrated novel "Ulysses." 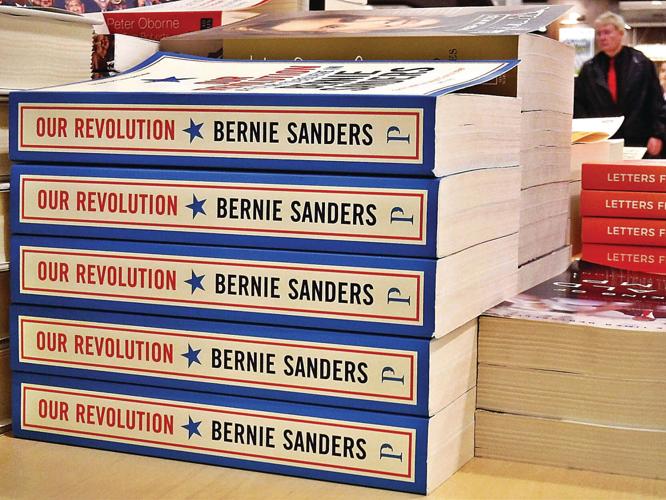 Ireland's Eason bookstore chain is selling Vermont U.S. Sen. Bernie Sanders' "Our Revolution: A Future to Believe In" at its more than 60 locations, including, pictured here, its Dublin flagship. 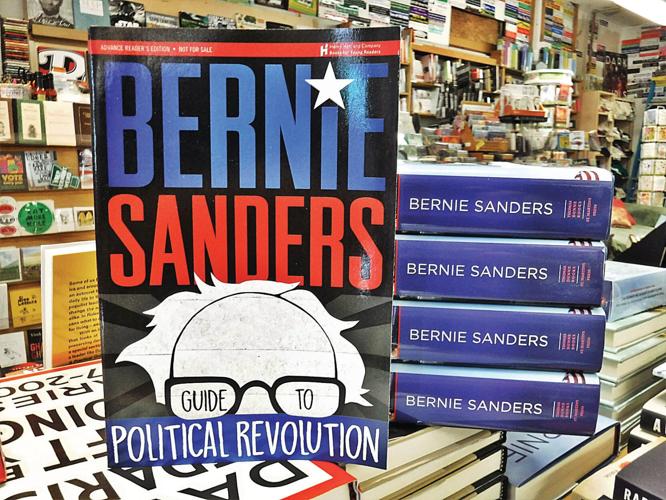 "Bernie Sanders Guide to Political Revolution," a book by Sen. Bernie Sanders , I-Vt., is pictured at Everyone's Books in Brattleboro.Kevin O'ConnorSpecial to the Reformer

Vermont U.S. Sen. Bernie Sanders' "Our Revolution: A Future to Believe In," is displayed prominently at Dublin's Hodges Figgis, Ireland's oldest and largest bookstore and a landmark in James Joyce's celebrated novel "Ulysses."

Ireland's Eason bookstore chain is selling Vermont U.S. Sen. Bernie Sanders' "Our Revolution: A Future to Believe In" at its more than 60 locations, including, pictured here, its Dublin flagship.

"Bernie Sanders Guide to Political Revolution," a book by Sen. Bernie Sanders , I-Vt., is pictured at Everyone's Books in Brattleboro.Kevin O'ConnorSpecial to the Reformer

DUBLIN, Ireland — The Green Mountains are a 3,000-mile stretch from the Emerald Isle. But when Vermont U.S. Sen. Bernie Sanders scheduled a recent book reading in this European city, fans snatched up all 2,000 tickets in a scant three minutes.

"His title has been huge for months," says a salesclerk at Hodges Figgis, Ireland's oldest and largest bookstore and a landmark in James Joyce's celebrated novel "Ulysses." "He's very popular here."

And seemingly everywhere else.

"Sanders's presidential race ended a year ago, but his campaign never did," the New Yorker magazine wrote this month in a multipage report. "Since the election, he has staged events in Michigan, Mississippi, Maine, West Virginia, Arizona, Nevada, Ohio, Kentucky, Wisconsin, Pennsylvania, Montana, Florida, Iowa, Maryland and Illinois."

Before Sanders became a frequent flyer, the politician hoofed up to his home state every first Saturday in June for Brattleboro's annual Strolling of the Heifers parade.

"The senator has been going for many, many, many years," his state political director, Philip Fiermonte, told this publication in 2015.

This summer, however, Sanders was across the Atlantic, capping an international tour for his New York Times bestselling book "Our Revolution: A Future to Believe In" with a sold-out reading at Ireland's biggest performance venue, the Bord G is Energy Theatre on the Dublin waterfront.

"If things had gone another way, perhaps the world wouldn't be hearing so much from Bernie Sanders," the Irish website www.thejournal.ie went on to write. "Ever since Donald Trump's shock win last November, the independent senator from Vermont has ramped up his activism, becoming a focal point for the 'resistance' to the new administration."

That is set to continue this week as the septuagenarian socialist releases an adaptation of his bestseller written especially for teen readers, "Bernie Sanders Guide to Political Revolution."

"It is my observation that the current generation of young people is the smartest, most idealistic, and least prejudiced generation in the modern history of the United States," he writes in the foreword. "This is your country. Help us take it back."

The author is set to promote the 240-page hardcover with appearances Monday in New York, Tuesday in Cincinnati, Ohio, Wednesday in Aurora, Ill., and Thursday in Iowa City, Iowa.

But inquire about readings back home and a publicist at the New York publisher Macmillan notes, "Unfortunately, we do not currently have any events scheduled for the senator in Vermont."

'We would give anything

It's not for lack of interest. Contact most any of the state's independent bookstores and staffers will tell you how they've tried unsuccessfully to schedule presentations.

"We would give anything to host Bernie," says Nancy Braus, co-owner of Everyone's Books in Brattleboro. "The people who work here have helped with all his campaigns."

The author, alas, is traveling elsewhere to promote the title, whose $63,750 in reported royalties are less than one-tenth of the $795,000 he received for his original "Our Revolution."

"For Sanders this year, there is always another stop on the tour," New Yorker staff writer Benjamin Wallace-Wells reports in his most recent story.

The senator made national news simply by announcing this week's event at Iowa's Prairie Lights bookstore, which, located in the home state of the nation's first presidential caucus, has welcomed former commander-in-chief Barack Obama and candidates Howard Dean, John Edwards and John Kerry.

Sanders first visited the Hawkeye State business in 2015 to read from his book "The Speech: A Historic Filibuster on Corporate Greed and the Decline of Our Middle Class."

"It was below zero and we had only two or three days to promote it," Prairie Lights co-owner Jan Weissmiller recalls, "yet we got 150 people."

That's a capacity crowd for the small store. So when Sanders proposed returning ("his publisher said he wanted to come here," Weissmiller says) his hosts considered securing the 200-seat Iowa City Public Library or 725-seat Englert Theatre (which recently housed a sold-out reading by Stephen King) before settling on the University of Iowa's 1,800-seat Hancher Auditorium.

Customers, for their part, reserved the store's 200 pre-signed copies within five minutes and all but a handful of the $25 tickets to Thursday's reading in less than a month.

"Bernie's a huge draw for a college town with a large population of 18- to 25-year-olds," Weissmiller says. "I haven't seen the book yet. Nobody is supposed to have it until the Aug. 29 release date."

That said, a preview copy obtained by this publication features eight chapters with such titles as "Guaranteeing a Livable Wage and a Decent Life," "Health Care for All" and "We Need Real Policing and Criminal Justice Reform," as well as glossaries of government and economic terms and an afterword that, as of just weeks ago, was still being written.

[SUBHEAD] 'We should have some access to these events'

That didn't stop Teen Vogue from trumpeting its "exclusive" sneak peek of a title "for teenagers hoping to learn more about progressive causes and how to mobilize around key issues" such as income inequality, "real tax reform," affordable higher education, immigration and climate change.

"Young people are the future of our country," Sanders told Teen Vogue in his one and only press statement on the book. "As citizens of the United States, they have a responsibility to participate in our democracy and to help create a government which works for all, rather than just the few. This book will expose them to an unusual political campaign, the excitement of politics and what being a progressive is all about."

The preview copy promises a "national marketing and publicity campaign" featuring "select large-scale author appearances." So far that doesn't include any of the three Vermont stores on the author's cross-country "Our Revolution" tour last fall (Burlington's Phoenix Books, Manchester's Northshire Bookstore and Montpelier's Bear Pond Books) or smaller locations like Everyone's Books, even though the Brattleboro store once hosted a Sanders campaign office in its stockroom.

Privately, booksellers are split over the senator's lack of home-state readings. Some say that because nearly three-quarters of Vermonters voted for him in his most recent election, his time is better spent introducing his ideas elsewhere. But others believe such strong support is why he should remember the Green Mountain residents who have given him a national political platform.

"We should have some access to these events that are happening all over the country," Braus says. "We need anything that would give us hope in a dark time."

If it's any consolation, Sanders isn't expected to return to Dublin either, even though event organizers there snagged him by reaching out to his wife, Jane O'Meara Sanders, and appealing to her Irish roots.

"Taking the stage to a rapturous reception, the senator told the crowd that Jane had taken a genealogy test that day — and that it had turned out she was 96 percent Irish," writer Daragh Brophy reported for TheJournal.ie. "The couple had paid a visit to the Phoenix Park to visit President Michael D. Higgins during the afternoon, we were told. But unfortunately, we never got to hear what was discussed."

Instead, Sanders was asked publicly if he would run for president in 2020.

("Admittedly," TheJournal.ie noted, "it would have been a strange choice of timing and location for a major campaign announcement.")

Sanders, who last week promoted his progressive policies in a three-state Midwest tour, will follow up his book launch with just-announced Labor Day speeches in the first-in-the-nation presidential primary state of New Hampshire.

And perhaps the closest that Green Mountain booksellers will get to the author for some time.

Kevin O'Connor is a Reformer contributor and VTDigger.org correspondent who can be contacted at kevinoconnorvt@gmail.com.