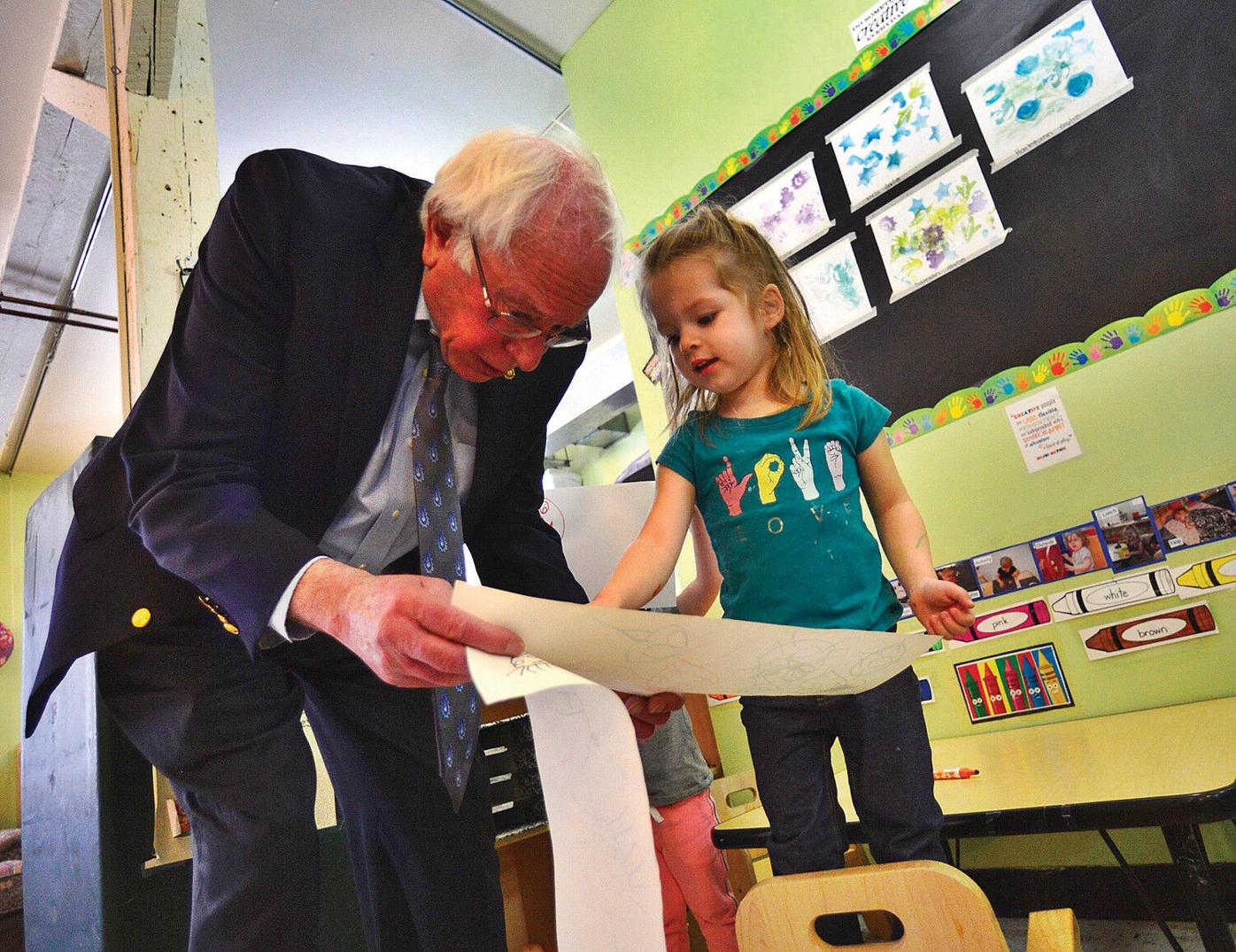 United States Sen. Bernie Sanders bends over to look at the drawing by Elizabeth Howe, 3, of Brattleboro, Vt., while touring the Early Head Start room at the Brattleboro Town School District's Early Education Services, in Brattleboro, on Friday 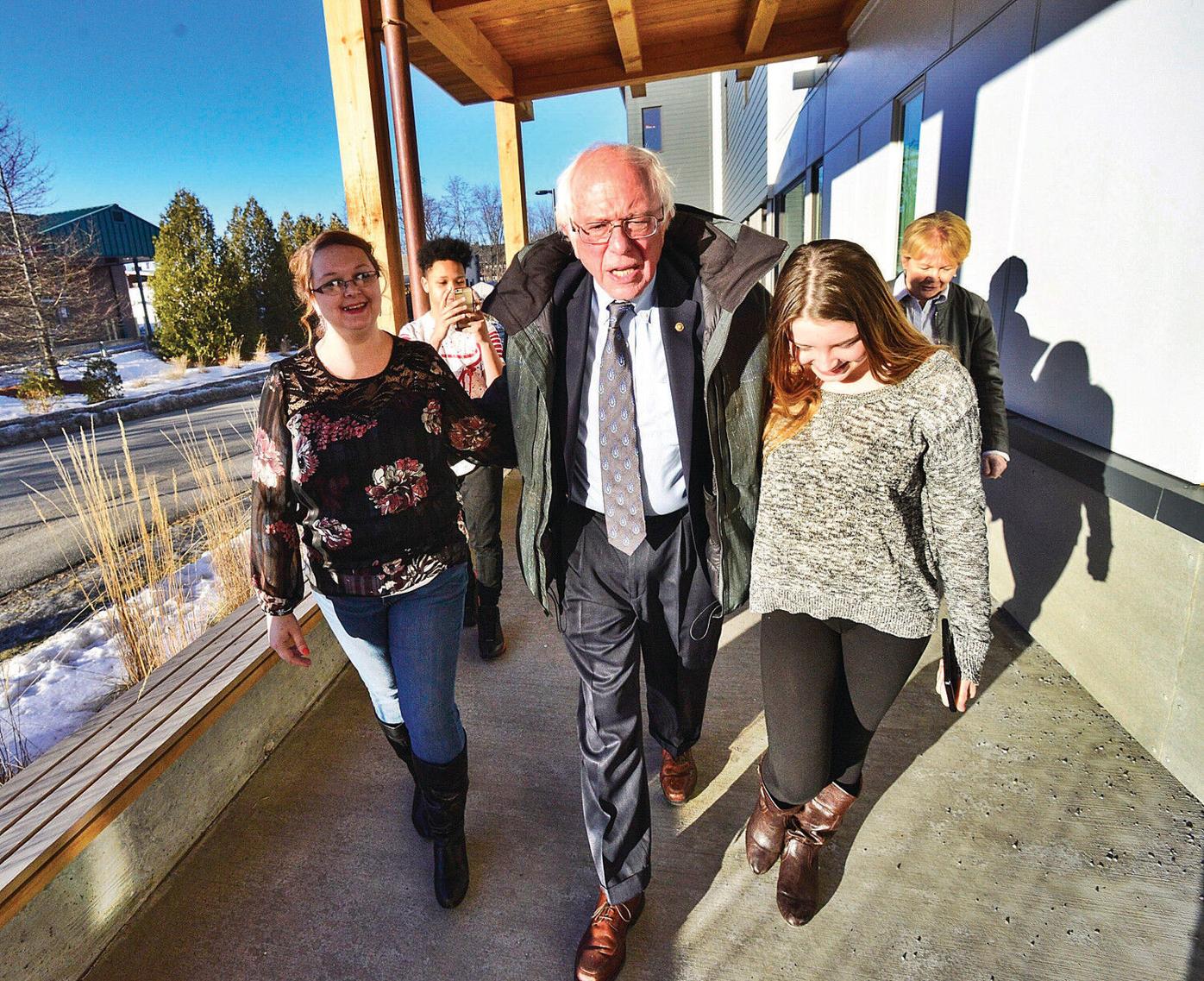 United States Sen. Bernie Sanders walks into the Red Clover Commons, in Brattleboro, next to Deja Chase, 14, of Brattleboro, on Friday. 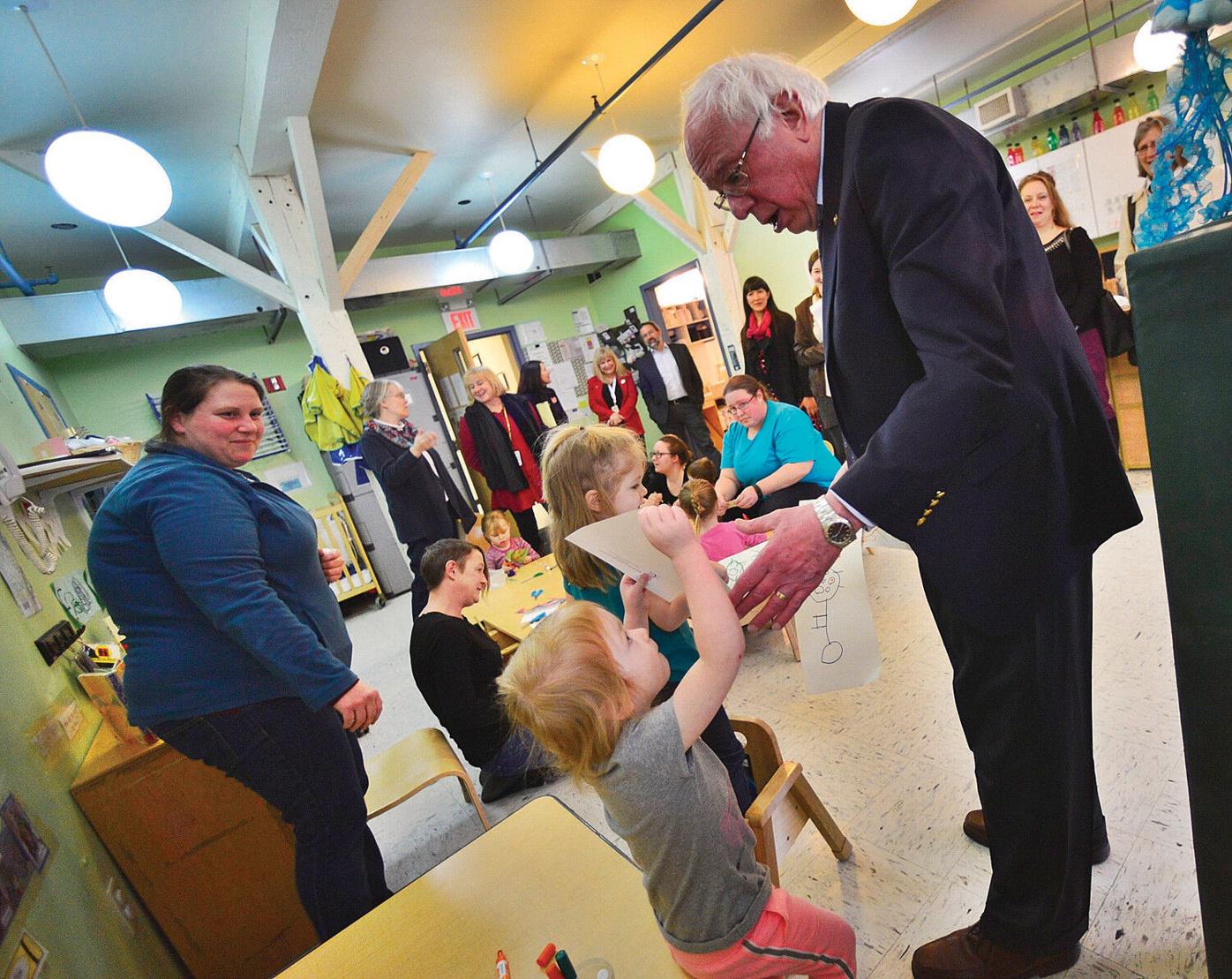 United States Sen. Bernie Sanders bends over to look at the drawing by Elizabeth Howe, 3, of Brattleboro, Vt., while touring the Early Head Start room at the Brattleboro Town School District's Early Education Services, in Brattleboro, on Friday

United States Sen. Bernie Sanders walks into the Red Clover Commons, in Brattleboro, next to Deja Chase, 14, of Brattleboro, on Friday.

BRATTLEBORO — As Senator Bernie Sanders entered the Head Start on Birge Street a little girl, Elizabeth Howe, greeted him by showing him her artwork.

During his visit, Sanders oohed and ahed over a number of pieces of art by preschool children. He talked to them about the topics of their drawings and let the children lead him around their classroom.

Following a college and career fair at Springfield College, Sanders traveled to Brattleboro. At 2:30 p.m., he visited Early Education Services and Head Start.

After visiting the classroom, Sanders went upstairs to talk the preschool staff, and his tone changed. He stood by a table and looked gravely out towards his small audience.

Windham Southeast Supervisory Union Superintendent Lyle Holiday told Sanders about the issues her staff are facing, particularly in early education. Her biggest issue was that early education teachers do a lot of work for barely a living wage.

"We have a poverty issue here," he said.

He said he'd been reading local news, and he was aware that Brattleboro had an opioid problem and he asked staff how that was affecting their classrooms.

Multiple teachers and some foster parents offered up stories about babies born addicted to heroin, and about children whose homes had been sold to feed the addiction.

From a teaching standpoint, Kim Freeman, the coordinator of education and human resources at Early Education Services, said teachers are spending too much time dealing with "The stress young children are experiencing because of things like addiction or poverty."

"They're acting out in classrooms?" Sanders asked. She nodded. "That requires a lot of schools," Sanders said.

Holiday said schools had made efforts to combat the stress children are experiencing. They've been giving free lunch to all students and they've been training teachers to become trauma-informed.

Ely Porter said, as a father, he was grateful that Head Start sent a caseworker to his home once a week. He said he and his wife can't afford childcare, so his wife stays home with the children. It also doesn't help that they live in Wardsboro, which he described as the "boonies"; they have to drive an hour just to get childcare, so it's nice that they get support form their caseworker, Sara Thomas.

In addition to childcare, people wanted other forms of education dealt with.

Mirela Weis, 20, said that in high school no one taught about real life issues like becoming homeless, something Weis had to experience. Weis felt like high schools needed to be more realistic with students; not everyone gets to go to college because some people can't afford it.

"I hope you're not right," Sanders said. He hoped that by the time the preschoolers were of age there would be free, public higher education in the United States.

Weis also cited mental health as being a barrier for people getting jobs.

"Mental health is a huge issue in this state," Sanders said. "We are not providing the kind of mental health we need." He reminded people that in "most industrial countries health care is a right and not a privilege."

He said that he was working on legislation that would help open up more community clinics. He asked how people were enjoying the Brattleboro Walk-in Clinic and commended their dental practices.

Health care was a bigger topic at Sanders' second Brattleboro stop. Sanders went to the Red Clover Commons, which is housed in a building he said he helped to get built. Many of the people living at the Red Clover Commons are on Medicaid or Medicare. Most of them are able to get the prescription drugs they need at a low cost because their Wellness Services Manager, Christine Hazzard, helps them fill out paperwork for special government programs. Many of them expressed their gratitude for Hazzard to Sanders.

Sanders asked if they knew what was going on in Washington regarding Medicare and most in the room responded that they did. Sanders said that though some people wanted to cut programs like Medicare and food stamps, there were many other people in Washington who were fighting for these programs to stay.

As Sanders left to travel to his next destination, he told the Reformer that he felt grateful to see people living in Red Clover Commons, but he was especially struck by his visit to Head Start.

"It impressed on me the terrible toll that opioids are having in many, many ways that are not so easily shown," he said. "It's not just the individuals themselves who are stuck in their addictions and what happens in their lives, but what happens to the lives of the children as well. It's one thing to know things in general and to hear it from mouths of people who have to deal with it every day. That's how I enjoy learning."