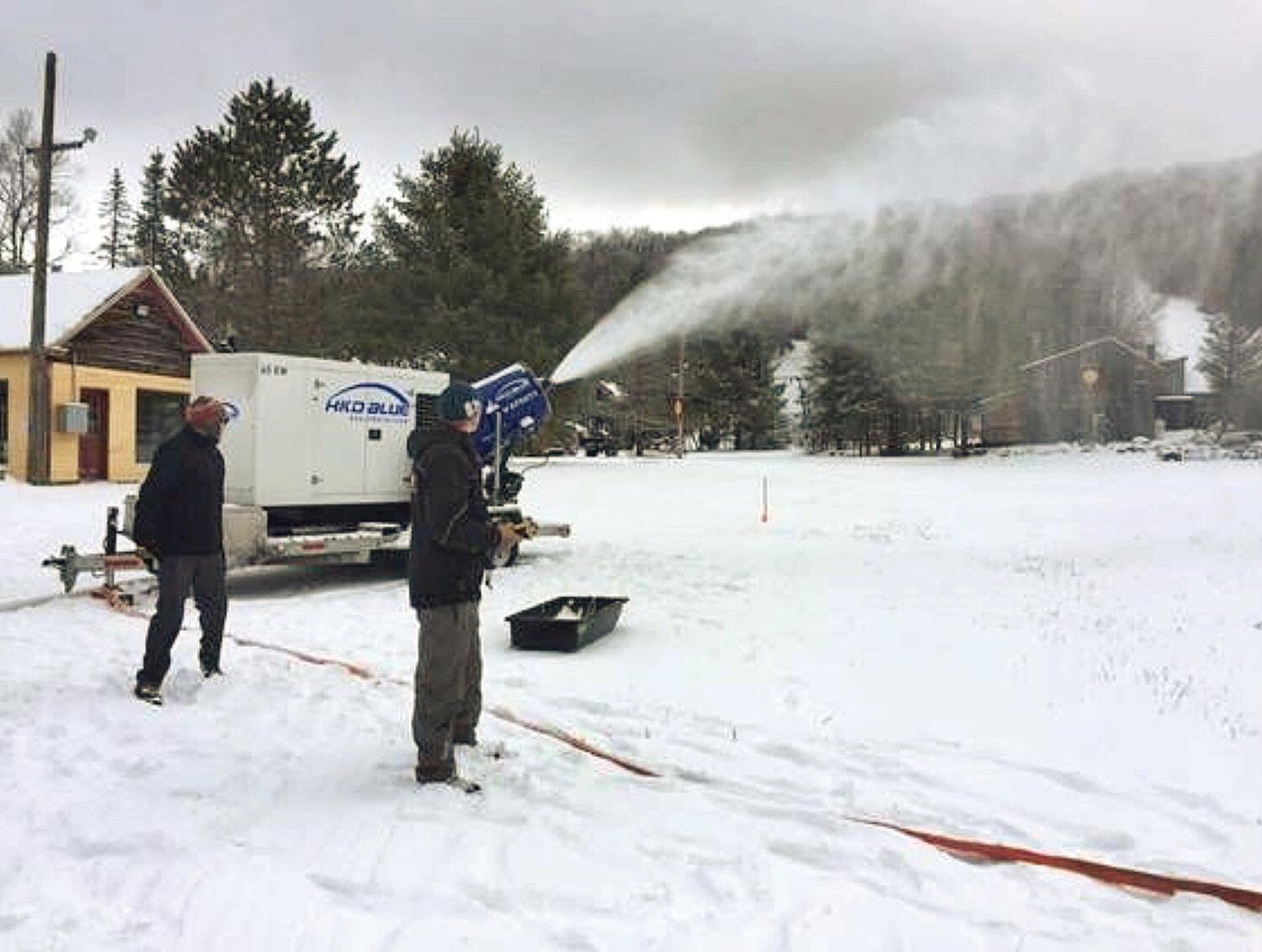 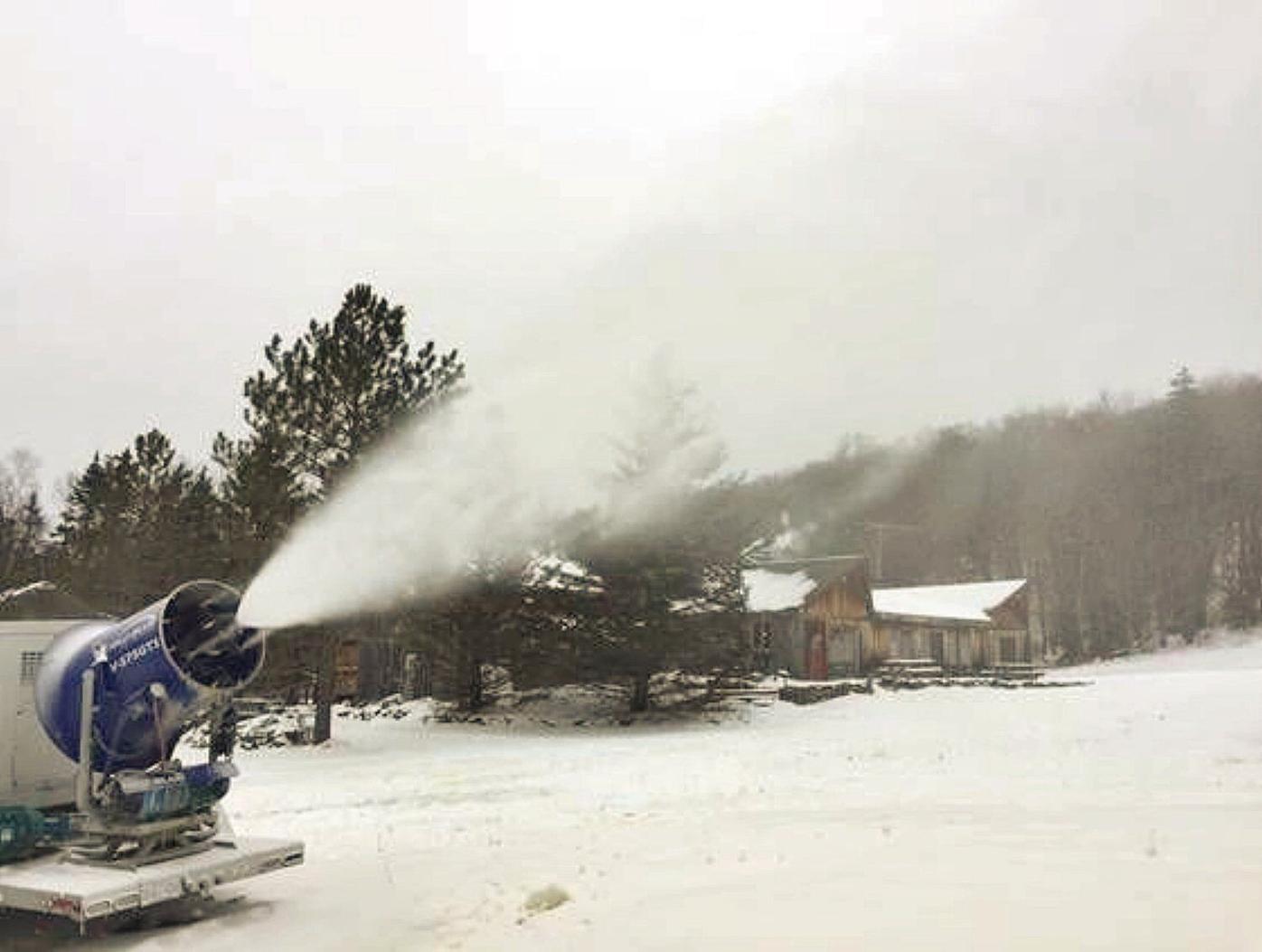 A snowmaking gun loaned by HKD Snowmakers, of Natick, Mass., propels mist into the air during initial snowmaking efforts to enhance trails at Prospect Mountain Nordic Ski Center in Woodford. The new nonprofit ownership group wants to add snowmaking on a permanent basis to extend the winter season and keep trails open during warm spells.

A snowmaking gun loaned by HKD Snowmakers, of Natick, Mass., propels mist into the air during initial snowmaking efforts to enhance trails at Prospect Mountain Nordic Ski Center in Woodford. The new nonprofit ownership group wants to add snowmaking on a permanent basis to extend the winter season and keep trails open during warm spells.

WOODFORD — Some history was made recently at Prospect Mountain Ski Area when snow-making guns were activated on the facility's Nordic trails.

Acquired in 2018 by the nonprofit Prospect Mountain Association, the Woodford site off Route 9 was eyed for snow-making to enhance the trails and ensure snowcover for such events as the Vermont high school nordic championships and the Williams College winter carnival.

School Nordic teams from around the region train and attend competitions at Prospect Mountain.

On Saturday, according to a media release, snow-making was launched at the center and will continue into next week as conditions permit. Portable snow-making equipment was loaned by HKD Snowmakers, of Natick, Mass., with water pumped from Prospect's original snow-making pond.

The mountainside area was once a small downhill ski area that became a Nordic center during the early 1990s.

Barkus Excavating, of Readsboro, repaired the original snowmaking pond over the summer, utilizing plans prepared by MSK Engineering and Design of Bennington.

"After a day of freeze-ups, things went well on Saturday," said David Dethier, a member of the Prospect association's board. "We view this snowmaking effort as education and practice for a bigger effort in the future that will help assure Nordic skiing at Prospect early in the season and after intense thaws that seem more common in recent years."

"Snow made using modern, efficient, snowmaking techniques is granular and dense, drains well and resists melting," the release stated, "all qualities that alpine ski areas recognized decades ago as they sought to provide stable snow conditions that draw consistent crowds."

The association also is developing plans for trail improvements and expansion that will include a snowmaking component. This work is necessary, the new owners believe, to allow Prospect to remain a popular venue for Nordic events in an era of climate warming.

A community-based nonprofit, the association purchased Prospect using contributions from more than 400 families, including residents of Southern Vermont and adjacent areas and former Williams College skiers.

Bennington-area businesses and the town of Bennington gave substantial donations, while a $285,000 grant from the Vermont Housing and Conservation Board, enabled by the Vermont Land Trust, allowed the purchase to go forward. With the assistance of the Land Trust, a preservation easement for the mountain portion of the land was established.

The 144-acre ski area was purchased from Steve Whitham and Andrea Amodeo in September 2018, along with five buildings at the site, trail grooming equipment and revenue from a cellular tower on the property for $900,000. Whitham stayed on as manager of the center under the new ownership.

Additional fundraising efforts have continued to fund future improvements to the facility, also including participation by Williams College alumni.

The association wants to focus on adding its own snowmaking equipment, but it also will explore ideas for off-season recreation on the mountain, such as hiking, bicycling or special events.

The association formed after the former owners, who had converted the area to a Nordic center after purchasing it 26 years earlier, said a few years ago that they would like to sell the property. A key goal of the effort, organizers said, was to prevent the land being sold for home sites or other commercial development.

Prospect Mountain, located in Woodford, eight miles east of Bennington on Route 9, opened during the 1930s as a downhill ski area, with a rope tow and later two T-bars.