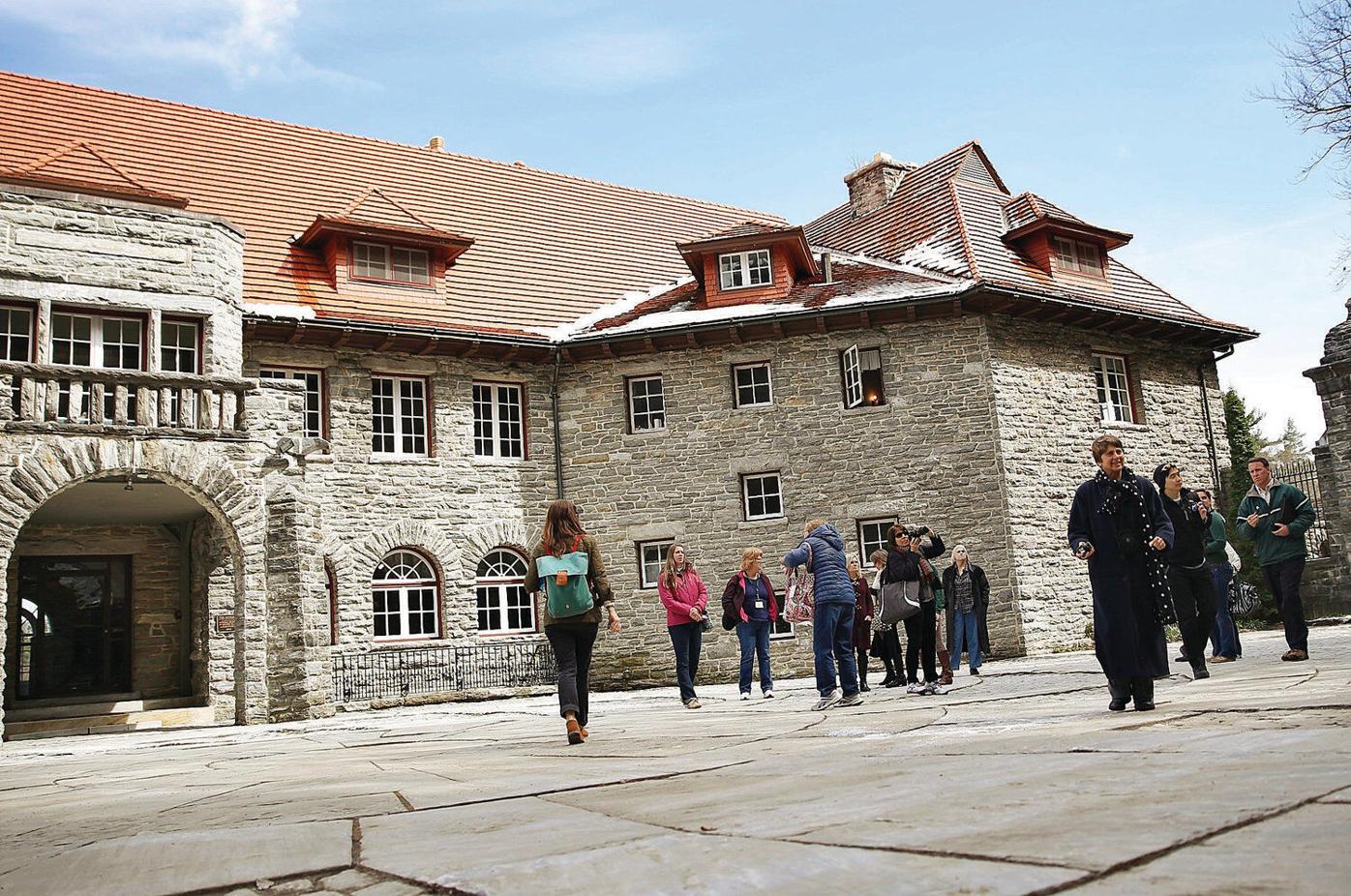 A Southern Vermont College student leads a tour of the campus. SVC President David Evans is responding to a notice from the school's regional accreditation commission that SVC could face probationary status and must attend a hearing Feb. 28. 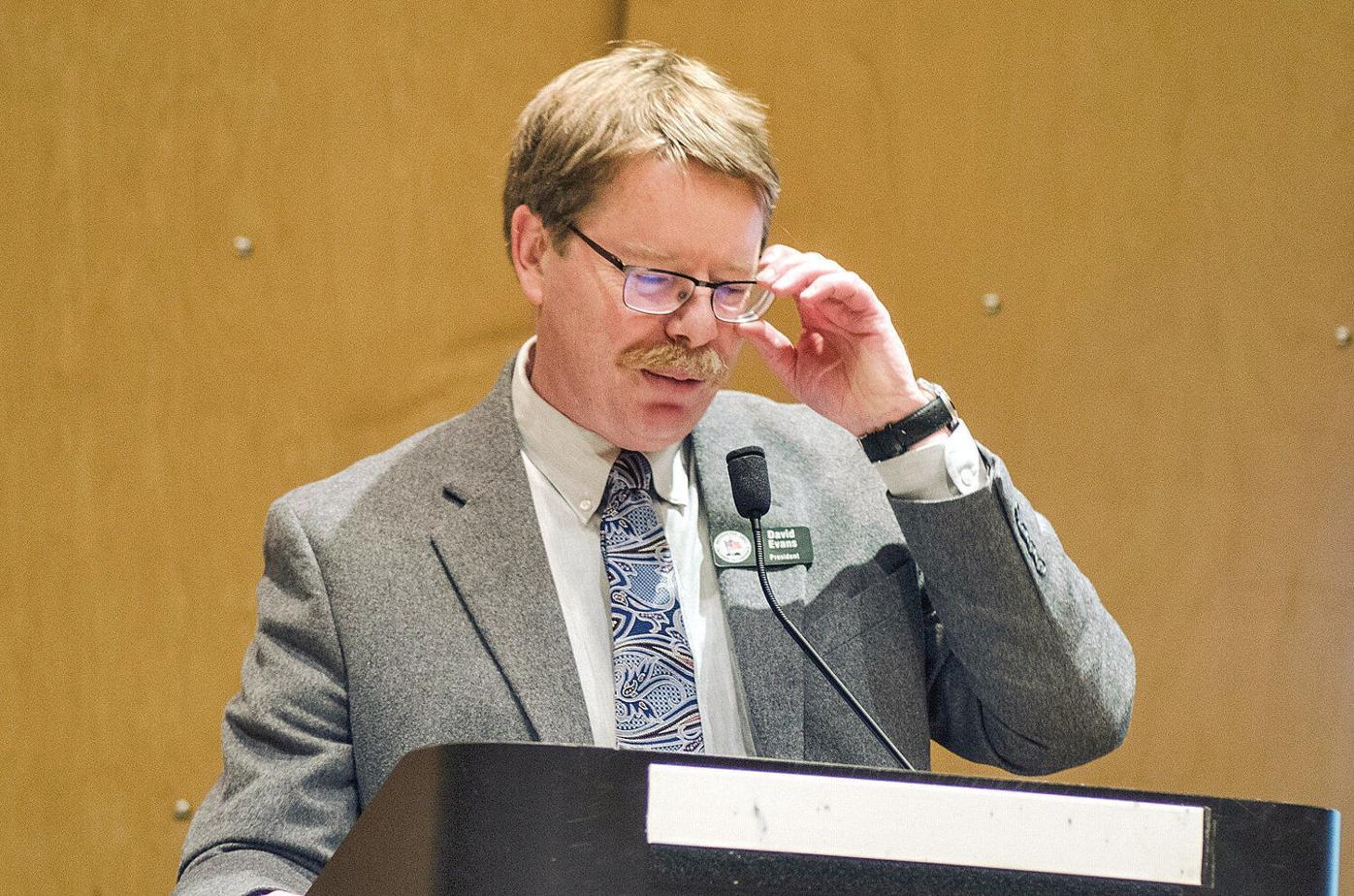 Southern Vermont College President David Evans is responding to a notice from the school's regional accreditation commission that SVC could face probationary status and must attend a hearing Feb. 28.

A Southern Vermont College student leads a tour of the campus. SVC President David Evans is responding to a notice from the school's regional accreditation commission that SVC could face probationary status and must attend a hearing Feb. 28.

Southern Vermont College President David Evans is responding to a notice from the school's regional accreditation commission that SVC could face probationary status and must attend a hearing Feb. 28.

BENNINGTON — Financial issues posing a threat to accreditation renewal for Southern Vermont College are being blamed in large part on a sharp enrollment decline several years ago from which the college has yet to recover.

SVC was asked this week to attend a show-cause hearing on whether the school should be placed on probation for failing to meet a standard for accreditation related to financial stability.

The New England Commission of Higher Education, which is considering periodic renewal of the accreditation status, voted Jan. 25 to ask SVC why it should not be placed on probation or have its accreditation withdrawn. The show-cause hearing is scheduled for Feb. 28.

According to a joint media release from the college and NECHE, which was obtained by New England Newspapers, the college is not meeting the standard on institutional resources.

That requirement includes that a college have "sufficient human, financial, information, physical, and technological resources and capacity to support its mission," and that "the institution demonstrates that its resources are sufficient to sustain the quality of its educational program and to support institutional improvement now and in the foreseeable future."

SVC was last accredited in 2009 and was due for a periodic review by the spring of 2019.

In response to the notice, SVC President David R. Evans said, "We are working diligently to provide evidence that SVC meets the commission's standard on Institutional Resources, and are identifying and implementing strategies to better support the institution in the future, including additional fundraising and strategic partnerships. SVC, like other small private colleges in New England and across many regions of the country, is facing exceptionally difficult financial challenges, but we are deeply committed to our mission and are giving our best efforts to ensure its sustainability."

If the commission subsequently finds that the college does meet the standard on institutional resources, it will continue SVC in accreditation and determine further monitoring, the joint release stated.

The notice of possible noncompliance for re-accreditation comes on the heels of reports about numerous small colleges around New England and nationally that have been forced to close or have announced they are struggling financially, often because of falling enrollment.

Those institutions include Green Mountain College in Poultney, and Mount Ida College in Newton, Mass., which have closed or are expected to in the spring; the College of St. Joseph in Rutland, and Goddard College in Plainfield.

In addition, several other New England institutions have slashed spending or merged with other schools or programs.

"The issue is enrollment and, consequently, finances," Evans said, when contacted about the NECHE notice.

The enrollment decline was initially related to issues in 2012 with accreditation of SVC's nursing program, he said, and also indirectly to the embezzlement of some $850,000 by a former SVC operating and financial officer, and for a time acting college president, who was under investigation when he resigned and then committed suicide in 2013.

The nursing program accreditation was never lost, Evans said, but that apparently was the perception, and enrollment declined by about 80 full-time nursing students as some transferred elsewhere and others graduated over the next few years.

Those situations produced negative publicity about the college and had an impact on recruitment and the size of SVC graduating classes, he said, which fell from 127 grads in May 2015 to an expected 70 this spring.

The college in 2012 enrolled about 500 students, Evans said, considered the highest in the school's history. Currently, the figure is approximately 350.

The SVC nursing program was accredited in 2014 by the Commission on Collegiate Nursing Education, which Evans said is a more prestigious organization than the former organization, the Accreditation Commission for Education in Nursing.

And an expanded bachelor of science degree program for future registered nurses, along with a tuition-assistance and job placement program in cooperation with Southwestern Vermont Health Care, is expected to lead to an enrollment boost, he said, in light of a severe projected shortage of applicants for RN positions statewide and nationally.

Evans added that new student enrollment has been increasing modestly since 2016, after three years of "precipitous" decline, primarily among nursing program students.

During that same period, chief financial officer and chief operations officer James Beckwith, who the previous year had served as college president while then-President Karen Gross was on leave, fell under investigation for embezzlement of college funds and committed suicide shortly after resigning from the school.

Evans said SVC ultimately recovered some of the missing amount, but "the college lost probably somewhere between $500,000 and $1 million, even after an insurance settlement and restitution from Beckwith's estate."

He said the college "spent several hundred thousand dollars in legal and other professional fees not to mention hundreds of hours of staff time working to ensure that all associated matters were taken care of."

With an embezzlement, a former official's suicide and the nursing accreditation issues occurring around the same time, Evans said, "it is not at all surprising that SVC's public image was greatly degraded, which has to have had a negative impact on our ability to recruit students. We also know that we lost donors, including some relatively generous ones, because of those two issues and other matters going on at the time."

He added, "For perspective, when I arrived in January 2015, I inherited a deficit of between $1.3 million and $1.5 million, based on a budget that had been built on about 50 to 60 more students than actually enrolled in the fall of 2014. We have been working ever since to catch up from that."

According to the joint media release, "The commission determined, through the periodic review process, that the institution may be out of compliance with one or more of the Standards for Accreditation."

Prior to its Feb. 28 show-cause hearing, SVC "will be asked to submit a report along with sufficient material evidence to demonstrate that it is compliant with the standard(s), or that plans and access to resources are in place to make it possible for the institution to become compliant with the standards within a time period not to exceed two years," the release states.

Material evidence required by NECHE generally includes financial statements, budgets, finance and enrollment projections, and institutional planning documents, according to the release, and an evaluation team might conduct a focused visit prior to the show-cause hearing to validate the college report.

At the hearing itself, the "commission will conduct a face-to-face interview with the chief executive officer and other relevant representatives of the institution, after which time the commission will make its decision based on careful evaluation of all materials."

Decisions to place an institution on probation or withdraw accreditation are appealable. Institutions on probation remain accredited and eligible for federal funding, including student aid.

Evans said of the college's situation, "What we really need is a significant amount of unrestricted giving to help us balance our budget with our reduced enrollment and to give us time to increase our enrollment as much as feasible and adjust our costs to accommodate a lesser enrollment if possible."

He said NECHE "does not appear to have concerns about our academics or other matters, nor do I. I firmly believe that overall things are the best they have ever been at SVC, excepting enrollment and finances."

SVC is an important part of the Bennington community, Evans said, adding, "Our annual economic impact is surely above $10 million, and every year we have between 60 and 100 students who are working in town, serving in internships, or engaging in clinical rotations at SVHC and other healthcare facilities. I have made it a special point to be involved in Bennington and join in the efforts going on here to improve the town ... I am hopeful that SVC and its supporters can work together to answer NECHE's concerns and move into the future on a stronger footing."

Evans also has released a memorandum to SVC students about the situation that explains the NECHE hearing process and states in part, "SVC's academic quality and integrity area not in question, and if the college is placed on probation, it will still be accredited and we will still be able to award federal financial aid."

He added, "While I hope to address any concerns NECHE may have, it is not possible to predict the outcome of the hearing. SVC has long relied on support from a committed group of dedicated and generous donors. SVC still relies on that support and it still has that support. We will together find out whether NECHE finds that support to be sufficient to meet its financial stability standards in the current climate."

Evans said the cabinet and board of trustees of the college are "working through plans to demonstrate our ability to meet NECHE's standard."

NEASC is recognized by the U.S. Department of Education as a reliable authority as to the quality of education. The commission accredits 220 degree-granting institutions in the six New England states and 11 American-style institutions in other countries.

Southern Vermont College evolved from Saint Joseph College, which was established in downtown Bennington by the Sisters of Saint Joseph in 1926.

In 1974, the college was transferred to an independent board of trustees and moved to its current location on the Everett Estate. Within a few months, the name of the college was changed and it became a private, independent college no longer having a religious affiliation.

SVC, like other small private colleges in New England and across many regions of the country, is facing exceptionally difficult financial challenges, but we are deeply committed to our mission and are giving our best efforts to ensure its sustainability.