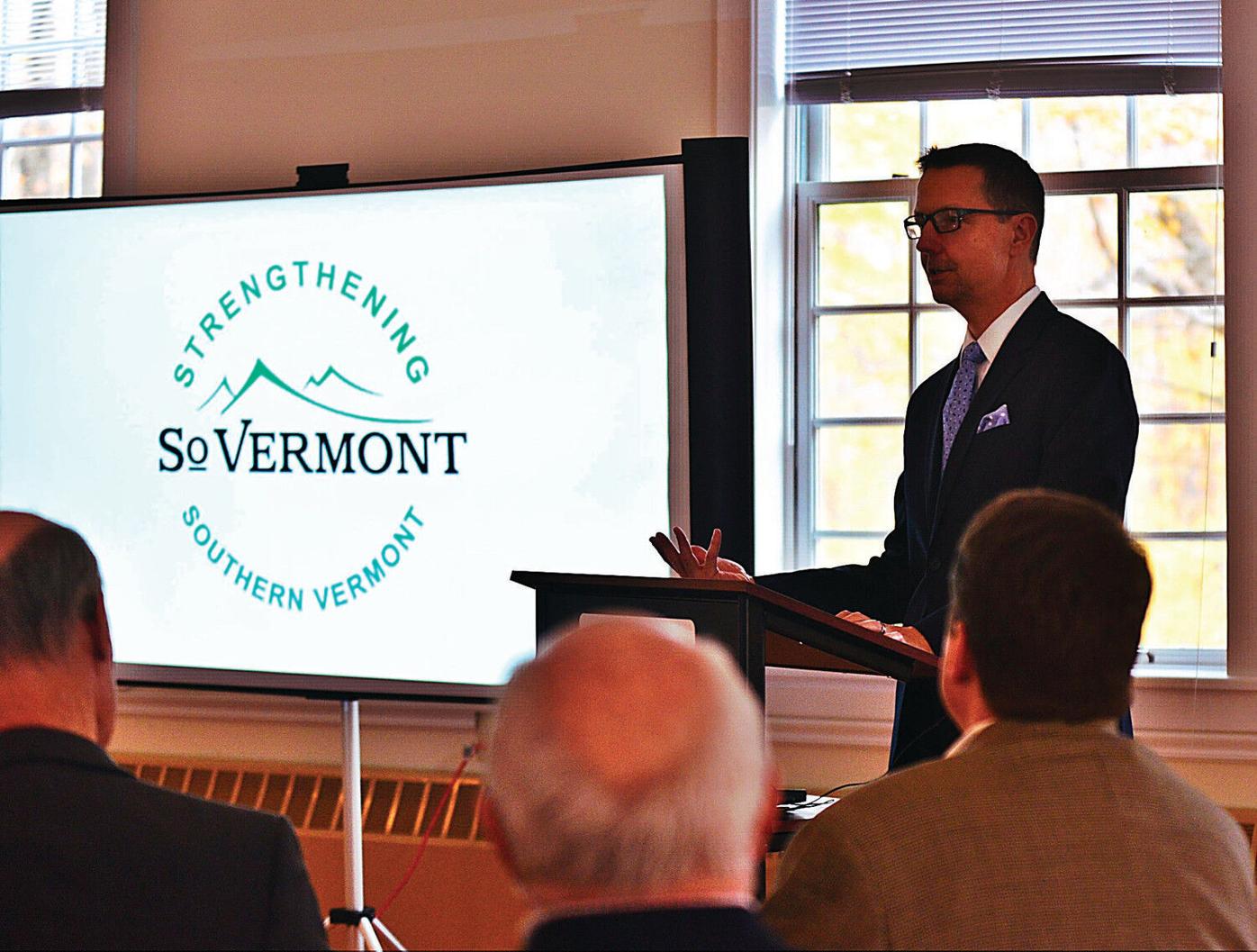 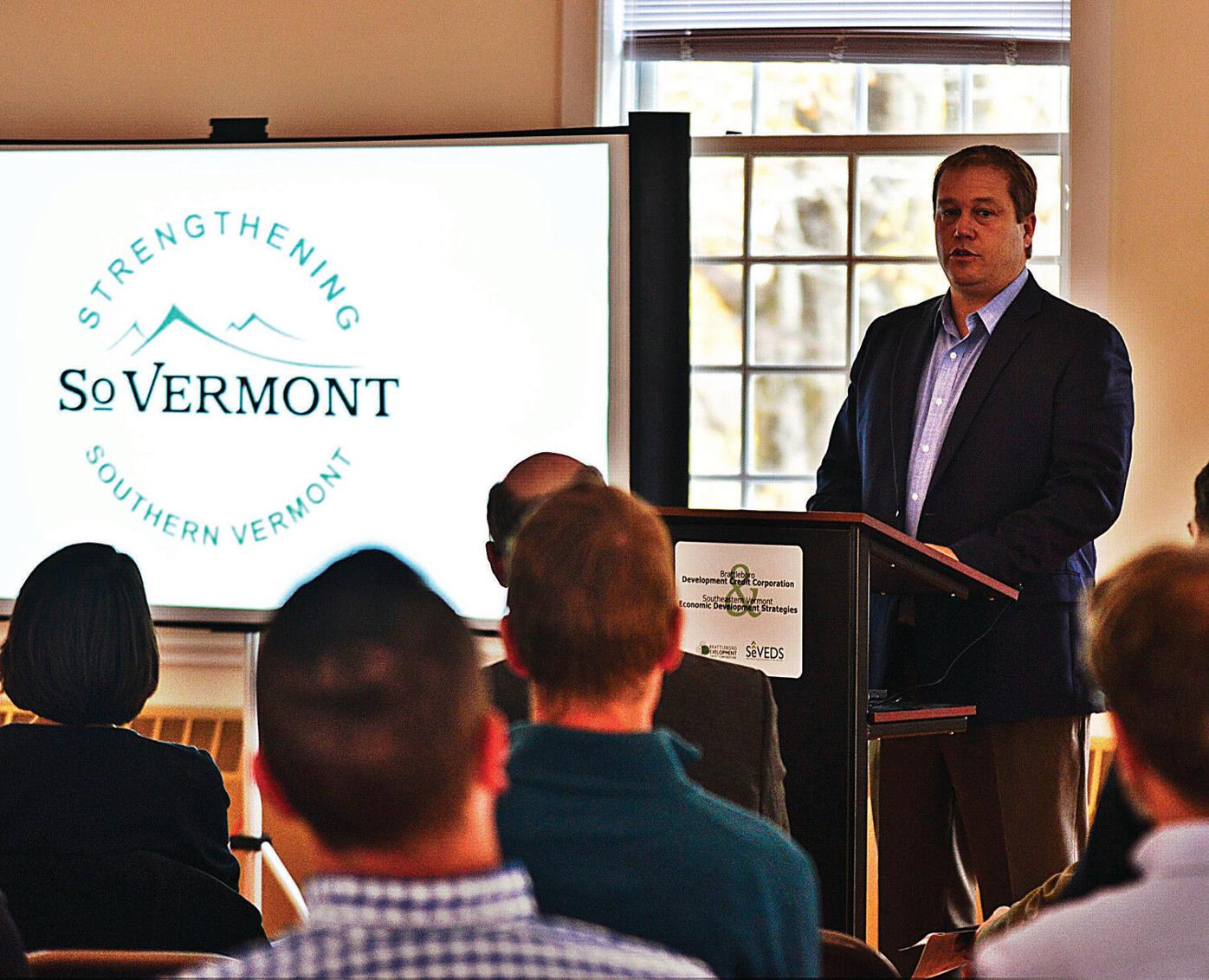 DOVER — Under the slogan "Strengthening Southern Vermont," officials from Windham and Bennington counties are moving forward with crafting a joint economic plan.

The U.S. Economic Development Administration has granted $70,000 toward the effort, officials announced Wednesday. By 2019, the region will have its first-ever "comprehensive economic development strategy" covering two counties and 44 communities.

The news comes two years after a state report declared that "Southern Vermont is in trouble" and urged more regional cooperation to address economic and demographic problems.

"What all this is about is strategic alliances for mutual benefit - that's really what we're doing," said state Rep. Bill Botzow, D-Bennington and chairman of the House Commerce and Economic Development Committee.

Speaking at a gathering at Dover Town Hall, Botzow recalled a time when the relationship between Brattleboro and Bennington was not much more than a "high school rivalry."

That's been changing on the economic development front, albeit somewhat slowly.

Adam Grinold, executive director of Brattleboro Development Credit Corp., traces the beginnings of that effort back to 2007. That's when a group of Windham County residents began talking about improving broadband and cell service.

That conversation quickly moved to economic development and birthed a group within the Brattleboro credit corporation called Southeastern Vermont Economic Development Strategies. Eventually, the Windham region crafted a federally recognized plan that's meant to serve as an economic roadmap for the private and public sectors.

The Windham region's comprehensive plan, which is updated annually with a list of "vital projects," received an award last year from the International Economic Development Council.

As evidence of the planning effort's successes, Brattleboro Development Credit Corp. officials pointed to such projects as a tri-state "Ecovation" project aimed at making the region a hub for green economic activity. They also mentioned the INSTIG8 program for boosting entrepreneurial activity, and publication of a "lessons learned" paper meant to help communities recover from the loss of a nuclear plant like Vermont Yankee.

Now, the idea is to craft a new, five-year economic strategy that brings Windham and Bennington counties together.

One of the first steps toward that more-formal partnership was the state Legislature's 2015 creation of a Southern Vermont Economic Development Zone. That was "a very small piece of legislative action that really proved to be a catalyst," said Rep. Oliver Olsen, I-Londonderry.

The legislation led to a report that portrayed southern Vermont's problems in stark terms. Those issues include a shrinking and aging population as well as declining retail sales, tourism and construction.

But one of the 2015 state report's key recommendations is that Bennington County should join with Windham County in creation of a joint comprehensive economic development strategy.

"The success of the Windham region will remain limited unless the Bennington region can act as a partner," the report's authors wrote, adding that "Bennington has not yet developed the tools that have enabled Windham to advance."

Hence the new, federally-funded planning effort. It is the "next step in building an even more vibrant economy in southern Vermont," said Bill Colvin, assistant director of the Bennington County Regional Commission.

Grinold said the joint planning project "will help in developing a shared understanding throughout southern Vermont about the most urgent issues affecting economic growth."

He added that, while planning isn't as "sexy" as building, it is critically important.

Ted Brady, deputy secretary of state Agency of Commerce and Community Development, said the two-county economic project is unique and "we need to find a way to replicate it across the state."

Brady said the Windham/Bennington discussions have "engaged new people" in economic and governmental affairs. And he took pains to separate the southern Vermont effort from numerous plans and reports in the state that have not resulted in much action.

"The difference in this network - you had a call to action," Brady said. "You had projects."

"The hardest part comes now, which is to continue to implement that call to action," he added.